Errors in the detection of phase changes by optical coherence tomography can be reduced significantly by using volumetric recording of images and digital image-processing techniques.
13 January 2016
Noé Alcalá Ochoa and Gilberto Muñoz Moreno

Medical fields such as ophthalmology, neurology, and gastroenterology have benefited from the development of optical coherence tomography (OCT). In recent years there have also been reports of its use in engineering, for example, to examine ceramics,1 to measure particle sizes,2 to inspect quality in the paper industry,3 and to analyze cracks in lenses.4 In general, an OCT system comprises a Michelson-type interferometer illuminated by a near-IR laser light source, a photodetector, and a processing system (see Figure 1). When a sample is illuminated, the backscattered light carries information about the internal structure of the sample by means of its backscattering potential, which is approximated by a Fourier transform of the measured scattered field data.5 The backscattering amplitude is a complex function that provides information about changes in the phase and intensity of the objects being tested.

OCT systems are divided into two types: spectral domain OCT and swept-source OCT (SSOCT). The first type collects information from multiple depths simultaneously by using a broadband source of light. The backscattered light is imaged onto an array detector by a spectrometer. On the other hand, SSOCT employs short-cavity lasers that are tuned rapidly by an electronically actuated Fabry-Pérot filter or a motor-driven grating filter. The spectrum is acquired by a single detector by temporally sweeping the source spectrum.6 SSOCT gives information about a single point in an A-scan. If scanner systems are used, areas can be analyzed via a 2D sectional view of the sample along (B-scan) or at right angles (C-scan) to the illumination direction, as can volumes. The original OCT systems were based on time domain OCT and used a broadband source of light with a reference arm in the interferometer, which was mechanically displaced to enable path-length scanning. In contrast, frequency domain OCT eliminates the need for this displacement.7

We have observed that it is quite difficult to detect phase changes using an SSOCT system, because when we try to achieve this by means of a B-scan we record phase changes whenever the object being tested undergoes any deformation. In addition, phase changes that we expect to be smooth present abrupt discontinuities. Unless we could eliminate these undesirable artifacts, which are introduced by jittering of the swept laser source and the mechanical movement of the scanners, it would be impossible to measure phase deformations accurately.

We have found a simple method of reducing these misleading phase terms.8 For this purpose, we acquired two volumes by SSOCT using two scanners, before and after deformation. Using both volumes, we calculated the difference in the wrapped phase (see Figure 2). As expected, even when we used consecutive B-scan frames, a misleading term appeared: see Figure 3(a). However, when we analyzed the volumetric phase term from another perspective—for example, using a C-scan or en face view—the slices did not present any smooth features apart from those caused by deformation. However, the slices contained additional noise, which was randomly distributed over the image in the form of enlarged speckles with a width of one pixel. We easily removed this random noise via a simple one-dimensional convolution (see Figure 4). After performing this convolution, we viewed the wrapped volume again from the perspective of the B-scan, which effectively brought about the removal of the misleading phase term: see Figure 3(c). We have found that the misleading phase term can be reduced to 0.05 radians.

Figure 2. Process used to reduce the undesired phase term. (a) Acquisition of a volume. (b) Analysis of the C-scan images. (c) Reconstruction of the original B-scan view. 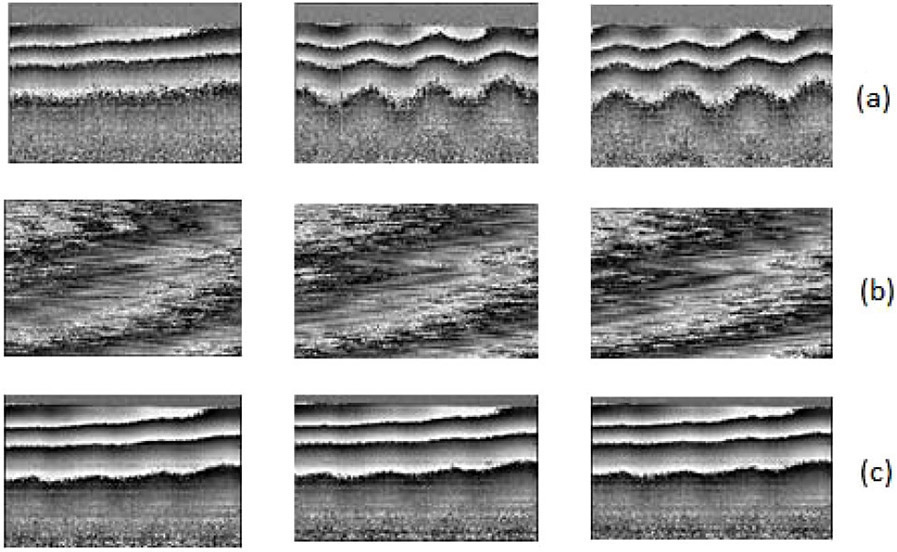 In summary, the problem of the undesired recording of false phase deformations has turned out to be a problem of noise reduction. We expect that by reducing the misleading phase term further with the use of an improved filtering process, we will be able to use swept-source OCT with scanners to measure volumetric deformation with confidence.