Rydberg atoms are those in an excited state where at least one electron has a large principal quantum number (n). These Rydberg electrons are located far from the core of the atom, which causes the system to display exaggerated properties. For instance, the spatial extension, polarizability, and dipole interaction of the atoms scale strongly in a non-linear manner with n. As it is possible for n to exceed 100, atom interactions may be enhanced by five or six orders of magnitude compared with the ground state. Rydberg atoms (hydrogen being the simplest case) can therefore have huge tunable interactions with each other and with external fields, and are ideal tools for precision measurements. Although cold atoms are good for studying fundamental physics, a different material basis is required for everyday applications.

Semiconductors are an appealing option for this purpose as they already form the basis of modern optoelectronics. Excitons—bound pairs of electrons and holes—are the basic excitations of semiconductors, and they represent the semiconductor analog of hydrogen. Exciton binding energies, however, are several orders of magnitude lower than the Rydberg energy of hydrogen. In addition, the line widths of the exciton states are typically larger (than the line widths of electron states in hydrogen) because of the inhomogeneous semiconductor surroundings. It is therefore uncommon for states with large n to be observed in semiconductors.

In our work, we have investigated several properties of macroscopic semiconductor excitations.1 In particular, we focus on cuprous oxide (Cu2O). This is the direct gap semiconductor material in which excitons were first discovered,2 and is ideal for observing highly excited excitons. In Cu2O, the exciton binding energy is about 90meV, which is about 20 times greater than for the prototypical semiconductor material, gallium arsenide. Furthermore, the valence and conduction bands of Cu2O are formed from copper states, and both bands have the same parity. Accordingly, optical dipole excitation of excitons with an S-like (i.e., orbital) envelope is forbidden by selection rules, whereas excitons with a P-like envelope are permitted.

We have studied the transmission spectrum of a high-quality natural Cu2O crystal.3 From this spectrum we could uniquely identify P-excitons with n of up to 25 (see Figure 1), which is much higher than has previously been reported for any solid-state system. The spatial extent of the n=25 excitons is about 2μm, which corresponds to a wave function that spans more than 10 billion crystal unit cells (or 10 times the wavelength of the light inside the material). The absorption lines within the spectrum exhibit a characteristic asymmetry. This is caused by the interference of the discrete exciton line and a continuum of states that is reached by coupling with optical phonons.4 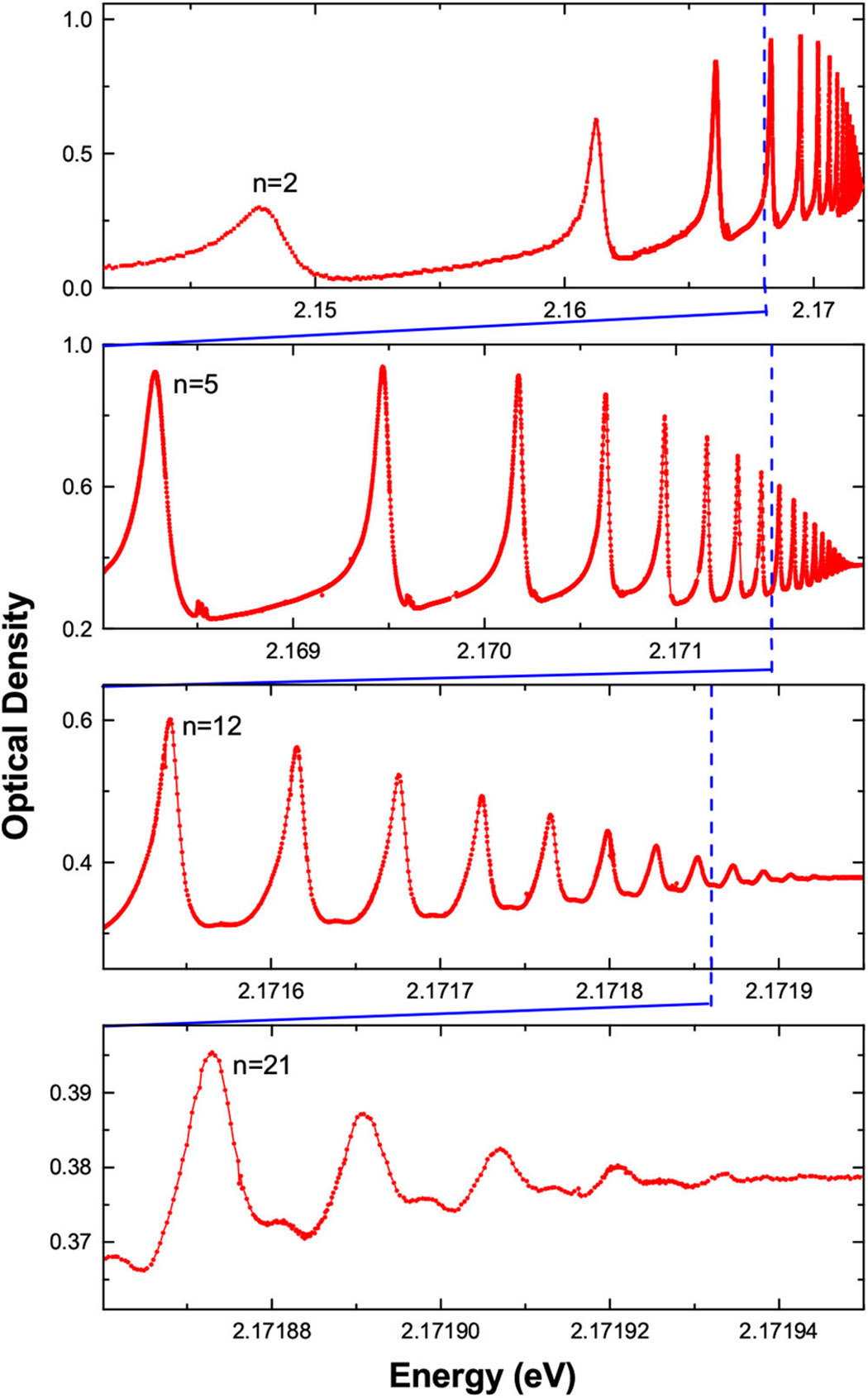 Figure 1. Absorption spectrum of a Rydberg exciton series (up to a principal quantum number, n, of 25) in a high-quality cuprous oxide crystal. Blue dashed lines denote the region shown in the panel below.

By fitting these exciton lines, it becomes straightforward to extract the resonance energies, line widths, and oscillator strengths of the Rydberg exciton states. Our results are in good agreement with the power law dependences that are known for Rydberg atoms. We find only small differences that are caused by the presence of low-symmetry semiconductor surroundings. Surprisingly, this breakdown of symmetry allows us to observe clear differences from hydrogen-like systems. For instance, F- and H-excitons, with high angular momentum, become observable in one-photon absorption.5 In addition, the degeneracy of states that have the same orbital angular momentum, but different magnetic quantum number, is lifted.

In summary, we have observed the semiconductor equivalent of highly excited Rydberg atoms. The ability to mimic Rydberg physics and create excitons with micrometer-scale spatial extent in a semiconductor is an exciting achievement. Further investigations in this field, however, are obvious and required. For example, we plan to study very thin samples, in which the blockade volume might become comparable to the crystal thickness. In that case, only a single Rydberg exciton can be excited at a given sample position. This would constitute a true single two-level system. If we are able to realize such a scenario, it may become possible to use Rydberg excitons as a semiconductor-based platform for quantum information and quantum cryptography.

We acknowledge support from the Deutsche Forschungsgemeinschaft and the Russian Foundation for Basic Research (ICRC TRR 160).

Marc Aßmann is a postdoctoral researcher in the physics department. In his research he focuses on the interface between semiconductor physics and quantum optics, including microlasers, polariton condensates, and Rydberg excitons.