White LED lighting systems are rapidly replacing formal incandescent lamps, contaminant (mercury-containing) fluorescents, and halogen lamps for general illumination. These devices are characterized by low energy consumption and a long lifetime, and rely mostly on use of efficient blue LEDs and ceramic powder phosphors (CPPs). While the power of blue LEDs has increased remarkably in recent years, their use for high-brightness white LEDs has been impeded by the low performance of CPPs embedded in epoxies and resins. The latter degrade under high irradiation intensities, and the conversion efficiency of CPPs drops notably as the temperature rises, thus reducing the efficiency, lifetime, and color rendering of bright white LEDs. Beyond this, there are further problems in applications based on laser diodes (LDs), such as projectors and automobile headlights, which require the incorporation of powerful cooling systems to moderate the temperature of CPPs illuminated at small spots with highly irradiant blue laser beams.

Recently, single-crystal phosphors (SCPs) have emerged as the optimal white-source convertors, especially for high-brightness applications.1 SCPs are based on the conventional phosphor compound cerium-doped yttrium aluminum garnet (Ce:Y3Al5O12), which is composed of non-toxic and widely available elements. Figure 1 shows the phosphorescence from a two-inch single-crystal ingot grown from the melt. Cerium ions (Ce3+) absorb part of the blue light and emit a broad yellow one, so that the sum of both is observed by the human eye as white. By partial substitution of yttrium ions with larger or smaller cations—for example, gadolinium and lutetium—we may shift the emission peak toward the red or green region, respectively. In particular, 100% lutetium substitution leads to an efficient green phosphor. This emission engineering is desirable to modify the color temperature of the emitter, so that we can tune the visual perception from cool to warm white light. Figure 2 shows schematically the new approach for white LEDs, where a conventional CPP encapsulant is replaced by an SCP plate. 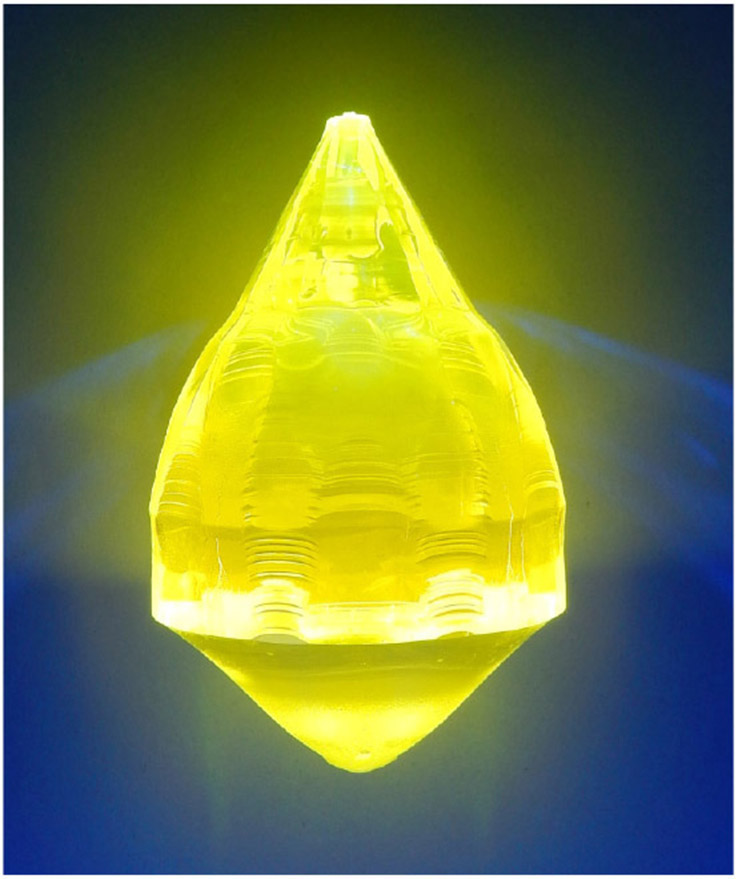 Figure 2. Schematic of a white LED with a conventional ceramic powder phosphor (CPP) (a) and with a single-crystal phosphor (SCP) plate (b).

In contrast to ceramics, single crystals possess a regular atomic arrangement, thus minimizing crystal defects and related emission quenching. Therefore, SCPs exhibit a very high conversion efficiency at room temperature and above. Figure 3 shows the internal quantum efficiency of SCPs in comparison with high-quality commercial CPPs. As is seen, the internal quantum efficiency of CPPs decreases with the temperature increase, while in the case of SCPs, it even rises. Single-crystal growth further guarantees a high emission homogeneity and reproducibility, which contrasts with the variable emission intensity from grain to grain in CPPs caused by the defects induced during the synthesis of ceramics. SCPs, meanwhile, can be shaped at any desired size, even powder size. Figure 4 shows the simple cases of a plate and powders obtained from an SCP boule. In contrast, CPPs are fabricated as very fine powders (in the order of 10 ∼ 20 microns), and must be embedded in an epoxy or a resin. Consequently, this limits their use as high-brightness LEDs or LDs in harsh environments (high irradiation and high temperatures). Furthermore, in comparison with CPP encapsulants, the heat dissipation in SCPs is determined only by the thermal conductivity of the SCP, which is about two orders of magnitude higher. Therefore, SCPs are not only less heated—due to their better conversion efficiency—but their temperature increase is outstandingly lower, thanks to the efficient heat release. Figure 5 shows a comparison of the temperature increase under the same blue-LD irradiation.2 At 1.7A, the conventional CPP emission is very low due to a temperature increase of more than 400°C, while the temperature of the SCP plate does not reach even 100°C. For even higher-power irradiations, CPP embodiments burn out, whereas SCPs are sustained without any degradation.2 This could be of practical use in (for example) remote heat-sink-less lighting. 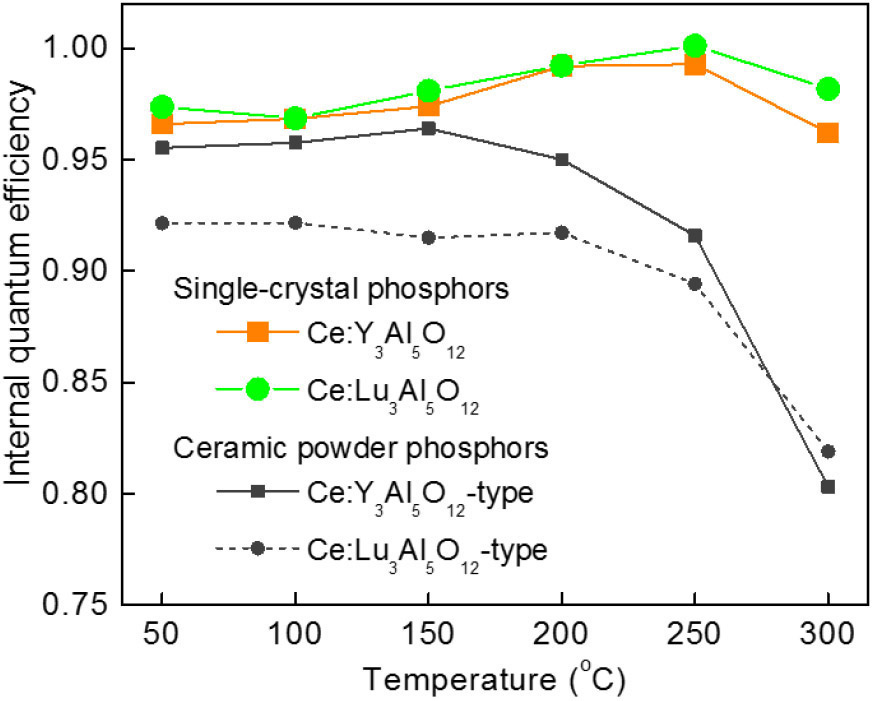 Figure 4. Photograph of SCPs in different shapes. (a) A plate. (b) Powder. 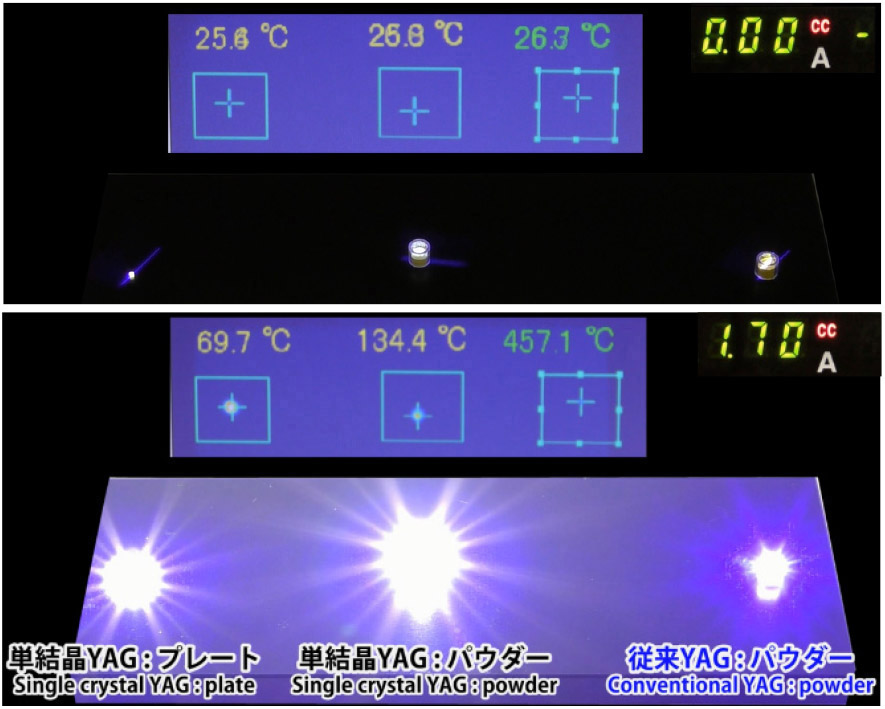 In conclusion, SCPs present the ultimate best performance among phosphors of any kind for high-brightness white LEDs. Their major characteristics can be summarized as non-toxic and all-inorganic, high conversion efficiency and temperature stability, high emission homogeneity and reproducibility, availability in any size and shape, binder-free packaging, resistance to harsh environments, no irradiance degradation, and no overheating. These features meet long-required phosphor characteristics for emerging environmentally friendly high-brightness applications such as headlights and laser TV projectors.

As a next step, we will focus on development of SCP growth technologies for mass production, and will seek to improve the color rendering of current SCPs.