Terahertz images obtained with solid-state-based sensors at different frequencies can be used to analyze the chemical content of packaged materials when the spectra are known a priori.
22 February 2016
Rimvydas Venckevičius, Irmantas Kašalynas and Gintaras Valušis

Color photography is now a ubiquitous part of everyday life, where compact and convenient cameras integrated within mobile phones are the main tool for recording high-resolution and high-sensitivity pictures. In general, these devices include complementary CMOS-based CCD cameras. For non-visible light regions of the electromagnetic spectrum, however, colored photographs cannot be taken with a CCD camera. Such wavelength ranges include the terahertz (THz) region, i.e., 0.1–10THz. THz imaging systems therefore exist mainly in scientific laboratories. Furthermore, very specific conditions are required to record THz images. This is because the THz quantum is too small (a 1THz quantum has an energy of 4.1meV) to be used (at room temperature) in imaging systems that are based on quantum mechanical structures, whereas THz frequencies are higher than can be reached through conventional carrier transport in the solid state.

THz imaging is a powerful tool for many non-invasive inspection applications, e.g., non-destructive material testing,1 identifying the chemical composition of drugs,2, 3 and non-invasive screening of biological tissues.4 In addition, this technique can be used for the development of THz security systems, such as screening for illicit objects in packages or for concealed weapons on people.5 As a rule, the materials can be identified optically via spectral measurements. In the THz region, however—and especially when the objects are packaged or hidden under clothing—such spectral measurements are complicated by additional scattering caused by the packaging. It is therefore desirable to avoid direct spectral recording during the identification of materials.

In this work, we describe our innovative development of solid-state-based sensors (and their arrays) that operate at room temperature in spectroscopic THz imaging systems. We show that THz images obtained at different frequencies (‘colored’ THz photographs) can be used to identify the content of packaged materials if their spectra are known a priori. We have focused on the solid-state approach because it permits a large number of possibilities for the design and fabrication of compact systems. The physical principles of solid-state detection also mean that operation at room temperature is not a restricting factor for optimal device operation. In our approach, we require a monochromatic THz emission source and a sensitive detection system to obtain THz snapshots at different frequencies. We can operate these in either the broadband sensing regime (with a tunability option) or in specially designed sensors that enable detection at selected frequencies.

To illustrate the performance and possibilities of our spectroscopic THz imaging technique and to obtain THz snapshots at different frequencies, we prepared samples that contained tartaric acid (TA) and sucrose (SC) as simulators of explosive materials. We prepared three different samples in which we mixed polytetrafluoroethylene (PTFE) powder with 10% TA, 10% SC, and 5% of both TA and SC, respectively. We then applied pressure and formed pellets with thickness of 1.4mm and diameter of 13mm. We also prepared a pure PTFE pellet for reference purposes. The samples were then placed in a metallic frame so that we could conduct free standing measurements—see Figure 1(a)—and packed inside a 4mm-thick high-density polyethylene (HDPE) container, as shown in Figure 1(b).

Figure 1. Photographs of pellet samples containing a mixture of polytetrafluoroethylene (PTFE), tartaric acid, and sucrose. Samples are shown (a) arranged in a free standing geometry for measurements and (b) within a 4mm-thick high-density polyethylene (HDPE) container (top removed).6

We used a customized vacuum Fourier spectrometer to measure the transmittance of the samples (see Figure 2). Our results show that the pellets containing TA and SC have spectral signatures in the 0.6–3.3THz frequency range, which are very similar to the signatures of real explosives. In addition, samples with a SC or TA content of 10% or more can be distinguished—because of the different absorptions of the two components—by obtaining images at discrete frequencies (e.g., 0.762, 1.84, or 2.52THz). 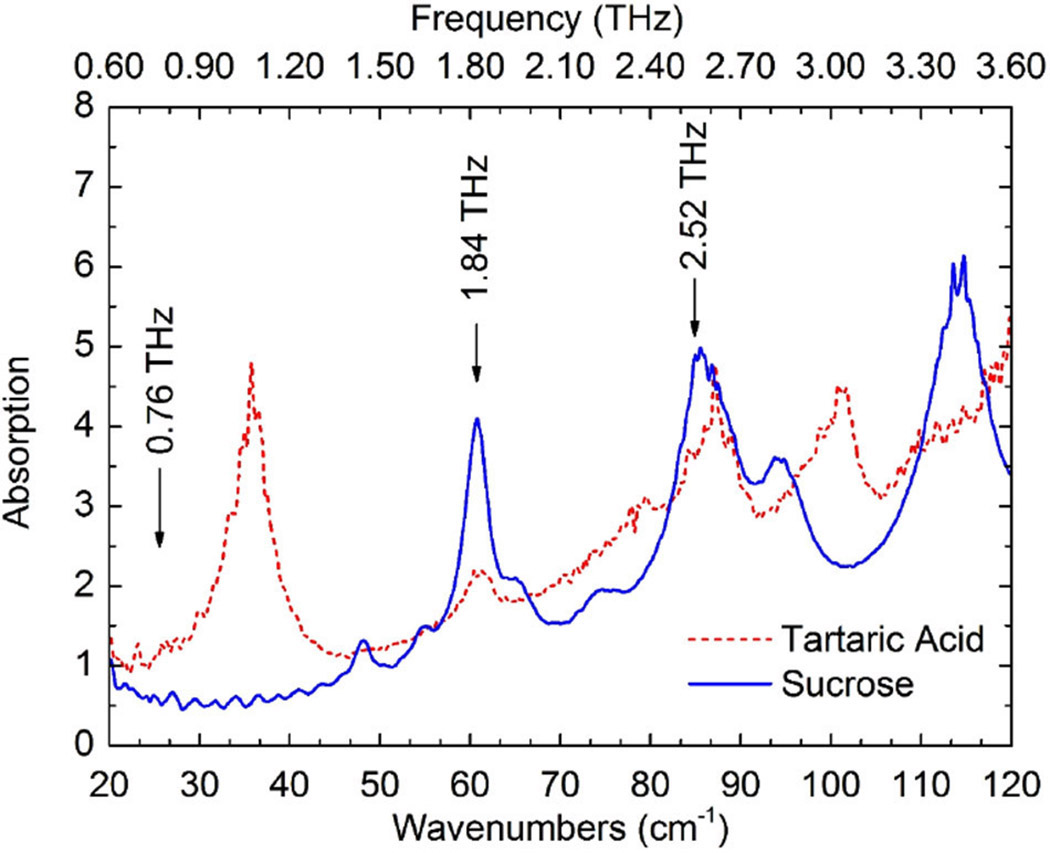 To demonstrate the acquisition of THz snapshots at different frequencies, we used indium gallium arsenide (InGaAs) bow-tie diodes. These are planar asymmetrically shaped structures, where one of the two semiconductor leaves is metallized and the other is left to be semiconducting. The metallic leaf concentrates the incident THz radiation in the vicinity of the apex. This induces an inhomogeneous electric field, which then heats electrons in the semiconductor leaf non-uniformly and generates a DC voltage signal.7 Such devices exhibit broadband operation7 and fast response times,8 and can thus be used for spectroscopic THz imaging.9 Our recorded snapshots (see Figure 3) show that the ‘colors’ and ‘shadows’ of the pellets are different (at absorbances of 0.762THz and 1.84THz). This indicates that the images are sensitive to the chemical composition of the samples.

Figure 3. Spectroscopic THz images (‘colored’ THz photographs) of the pellet samples obtained at a frequency of (a) 0.762THz and (b) 1.84THz.

We also used a principal component analysis to determine the distribution of the ingredients (on a percentage scale) within the pellets.6 For instance, the SC and TA distribution is shown in Figure 4. By defining the range of interest, we estimated that the SC content was 9.9±0.7% and 6.1±0.8% for samples 2 and 3, respectively, and that the TA content was 10.1±1.4% and 2.5±1.3% for sample 1 and 3, respectively (refer also to Figure 1). We note that there are some interference effects that are caused by the packaging of the samples (i.e., a container that is opaque to visible light). We are thus able to determine the chemical composition of the materials with reasonable accuracy—without direct spectral measurements—if the spectrum of the object or material is known a priori, and the discrete frequency THz imaging system is optimized to characteristic lines. 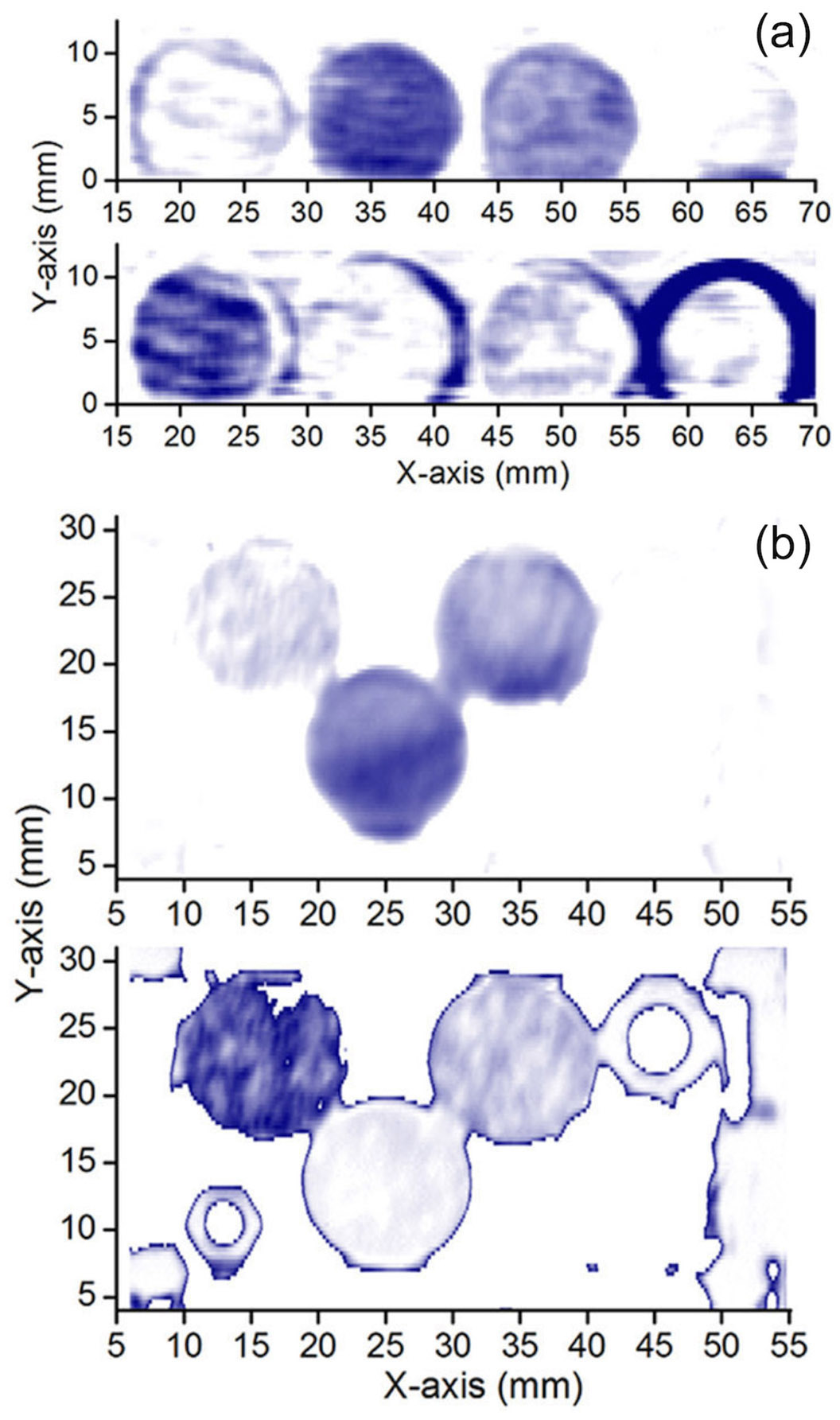 Figure 4. Distribution of sucrose (top plots) and tartaric acid (bottom plots) in the pellet samples, as imaged from (a) the free standing geometry and (b) within the HDPE container. Photographs of the two samples arrangements are shown in Figure 1.6

We can operate the bow-tie diodes in a heterodyne imaging mode and thus achieve high detection sensitivity.10 With the aim of implementing our concept into direct applications and compact camera designs, we fabricated arrays of the bow-ties for THz imaging.11 We have also recently demonstrated the enhanced performance of these bow-tie sensors and on-chip integration of optical focusing components (zone plates).12 Our results indicated that commercially available CMOS technology can be well-suited for solid-state-based spectroscopic THz imaging. In this approach, plasmonic effects in nanometric field effect transistors coupled with resonant antennas are used as the detection principle. We also showed that it is possible to overcome limitations set by carrier momentum relaxation time—which is inherent to bow-tie diodes—and thus extend the THz snapshots recording scale to 4.25THz.13

In summary, we developed new solid-state-based sensors that can be operated at room temperature for spectroscopic THz imaging purposes. We also obtained THz photographs at different frequencies to demonstrate the viability of our technique. Our results show that it is possible to determine the chemical composition of packaged samples if their spectra are known a priori. In our work, we are currently focused on the optimal design and fabrication of the on-chip integrated compact THz imaging system for spectroscopic needs. We aim to demonstrate the performance of the system by imaging biomedical tissues, and to provide increased depth sensitivity and better spatial resolution.

Rimvydas Venckevičius has been a researcher in the Optoelectronics Department since 2009. His current research interests include terahertz imaging, Fourier spectroscopy, and carrier transport investigations in semiconductor superlattices.

Irmantas Kašalynas is a senior research associate in the Optoelectronics Department and is the leader of the Terahertz Photonics Laboratory. His current research interests cover compact room-temperature terahertz and sub-terahertz radiation detectors and sources, passive filters, and plasmon resonance devices.

Gintaras Valušis is currently the director of the Center for Physical Sciences and Technology, and is a professor in the Semiconductors Physics Department at Vilnius University. His current research interests include terahertz physics, as well as spectroscopy and physics of semiconductor devices.