Methane is the second most prevalent greenhouse gas after carbon dioxide, and influences tropospheric ozone and water vapor, further increasing its importance to the Earth's radiation budget.1 Due to its short atmospheric lifetime compared with carbon dioxide, a reduction in methane emissions can produce a rapid response in moderating climate change.2 Therefore, methane monitoring will be an important component of a greenhouse gas regulatory framework. However, constraining the atmospheric budget of methane has proved difficult, notably because of its numerous sources.3

In remote and rural areas, problems with space, gas and electric supply, dust, and temperature can present challenges when establishing ground-based stations for atmospheric gas measurements. Often there is insufficient infrastructure available to install valuable and delicate methane analyzers, such as gas chromatograph and cavity ring-down spectroscopy instruments. As a result, there are often uncertainties in quantitative estimation of methane emissions. Satellite observations can enable sensing of methane and retrieval of information on abundances of the gas, but these can be compromised in areas with frequent cloud cover and high aerosol optical depth.4 Ultimately, we require detailed comparisons between satellite and ground-based measurements, which necessitates in situ atmospheric measurements over vast and fast-growing regions for an improved, more detailed understanding of methane budgets.

To obtain in situ observations in remote regions, one conventional and reliable method of gas measurement is air vessel sampling followed by laboratory analysis. However, to be effective, this technique requires frequent samplings and measurements to investigate regional emissions and advection (bulk motion of fluids).

To overcome these issues, we developed an in-field methane concentration measurement system that provides continuous observations, and it interpolates the data obtained by the traditional sampling method with a one-week interval. We operated the system at a barn in a paddy field in rural northern India close to methane sources. We used the LaserMethane miniG (LMm) detection system, which was originally designed to identify gas leaks.5 The instrument is small (W70 × D179 × H42mm), cost-effective, has low electric consumption (∼1W), requires very little maintenance, and is highly durable. It can measure atmospheric methane concentration continuously, and is therefore suitable for field observations in rural areas.

The LMm senses and measures methane by an open-path method, using a near-IR diode laser for IR absorption spectroscopy. In field measurements, the laser light is returned by a reflector located tens of meters from the unit, and is detected by a photodetector in the instrument (see Figures 1, 2). The LMm can quickly and selectively detect the methane concentration integrated over the open optical path, and achieves high sensitivity by second-harmonic detection using wavelength-modulation spectroscopy. The relative error of the methane concentration for a 10min integration time is less than 2% when measuring the typical atmospheric concentration with a path length of 50m. We provided an instrument chassis and frame for adjustment of the laser alignment, as well as a battery-backed power supply system to enable continuous operation since the region has only intermittent AC power supply (see Figure 1). 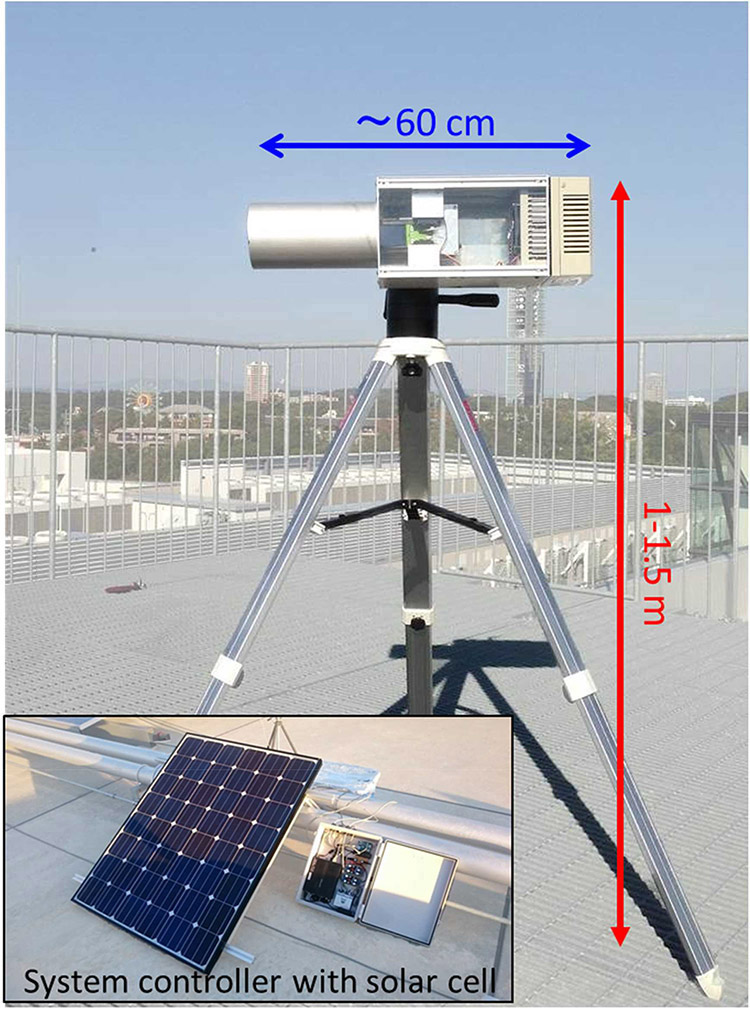 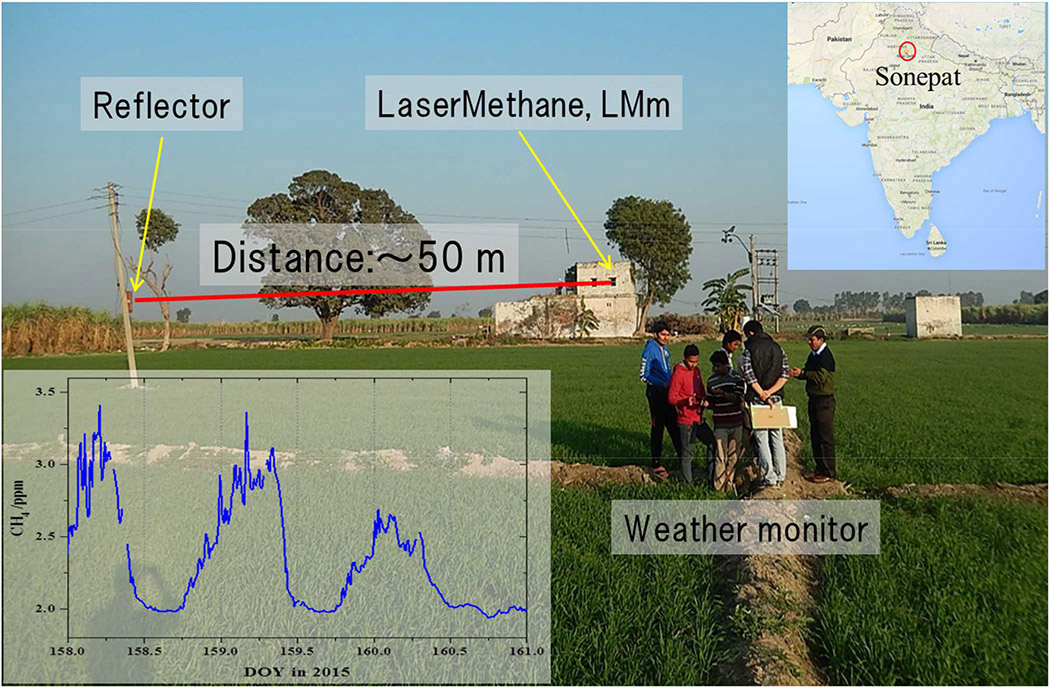 We conducted continuous measurement of methane at the Indian paddy field since December 2014 to investigate diurnal and seasonal variations of methane concentration and their relationship with sources and meteorological conditions (see Figure 2). We calibrated the concentration values of methane by the data obtained using the vessel sampling method once a week at the same site. The measurement system has not only provided the seasonal variation characteristics, such as enhancement of methane in the monsoon season relating to the rice vegetation phenology, but also provided detailed information on diurnal and day-to-day variations related to the local meteorological conditions and local emissions. Figure 2 (inset) shows typical results of the diurnal variations. The observation results obtained prove the durability of the instrument for methane network observations.

Our system achieved low-cost, easily installed, almost maintenance-free performance, supplying measurements at hard-to-access sites close to methane sources. Our future work will focus on extending the observation network over a larger area from the plains to the mountain regions. In this way, we may further the studies of satellite retrievals that show a plume-like enhancement of methane over south Asia during the monsoon season, suggesting enhanced emissions and deep convection during that time of year.6, 7

This work is sponsored by the Green Network of Excellence programs of Japan's Ministry of Education, Culture, Sports, Science, and Technology. We are grateful to Dr. Yukio Terao (National Institute for Environment Studies, Japan) for sampling measurements of methane in India.