Optical current sensors (OCSs) offer several advantages over Hall effect, or other, conventional current sensors. Such advantages include resistance to electromagnetic interference, suppression of background magnetic fields, and the placement of supporting electronic equipment away from the dangerous high-voltage environment that often surrounds the sensors. As a result, fiber optic current sensors (FOCSs) have found various uses, such as in electrowinning, power grids, and other industries. Recently, other emerging applications (e.g., electric automobiles) have introduced the need for sensors with even higher sensitivities and reduced footprints. It is necessary, however, to also maintain the inherent advantages of OCSs in these advanced FOCSs.

The operating principle of a FOCS is based on the fact that oppositely handed circularly polarized light waves travel at different speeds in a material that is under the influence of a magnetic field, which induces a relative phase shift between the two polarizations. This effect—known as Faraday rotation—can be quantified by a material parameter (the Verdet constant) and the length of the sensing fiber. Several sensor configurations that are based on Faraday rotation have previously been demonstrated. In the most accurate of these sensors an interferometric approach is generally used. In this type of approach, the relative phase shift is measured by interfering the two polarizations of light with each other. This configuration—the Sagnac interferometer—is similar to that of optical gyroscopes.1 One way to achieve a greater phase shift and a higher FOCS sensitivity is simply to increase the length of the fiber. This leads, however, to an increased footprint and undesired birefringence, which decreases the sensitivity.

In our work,2,3 we have demonstrated an alternative approach, in which we use materials with larger Verdet constants to achieve higher sensitivities. Standard silica fibers have a low Verdet constant (0.8rad/Tm) at an operating wavelength of 1300nm. This can be improved by doping the fiber with rare earth elements such as terbium (Tb),4 which has a Verdet constant of up to 15.5rad/Tm at the same wavelength.2

We have used a Tb-doped fiber as the sensing element in an interferometric Sagnac loop current sensor. With this device—see Figure 1(a)—we are able to measure DC currents down to 0.1mA in a solenoid, using only 10cm of fiber. It is also possible to expand these experimental results for longer lengths of Tb-doped fiber for use in practical sensing configurations, as shown in Figure 1(b). Our extrapolations show that a 50cm-long Tb-fiber chain can produce a noise figure as low as 22mA/ # Hz. It is possible to make further improvements by decreasing the propagation loss of the Tb-doped fiber, or by using an alternative in-line Sagnac interferometer configuration for the sensor.5 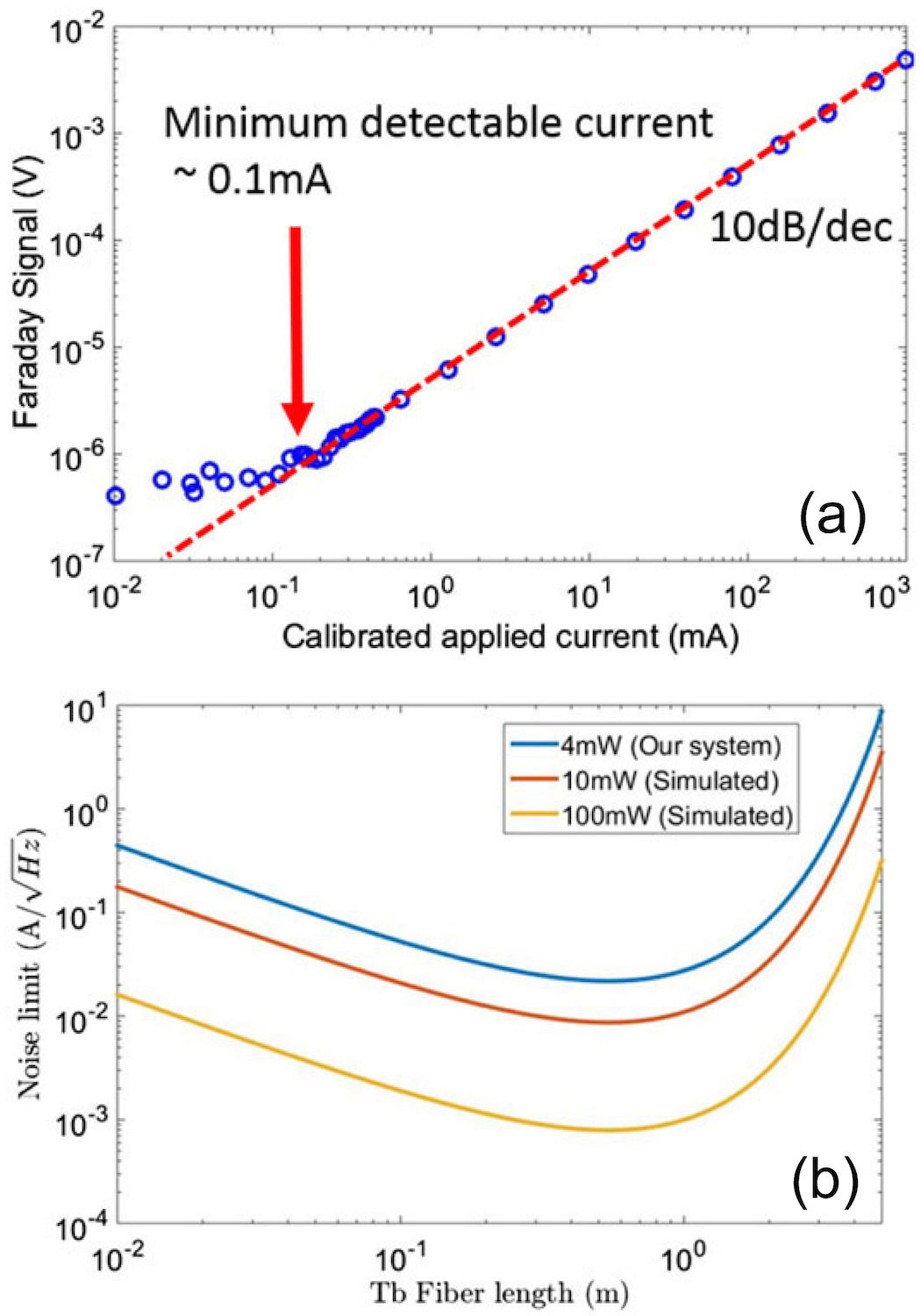 Figure 1. (a) Detected Faraday signal in a 507 turn solenoid (10cm fiber), for a wide range of currents. The measurements follow the 10dB/decade slope until the sensed current is less than 0.1mA, at which point the sensor has reached its detection limit. (b) Predicted sensitivity for longer terbium (Tb)-doped fibers at a range of optical powers.

Even more drastic improvements to FOCSs can be made by moving away from fiber systems and using photonic integrated circuits (PICs) instead. Heterogeneous integration for silicon photonics provides a method for combining previously incompatible materials on silicon (i.e., through wafer bonding techniques).6 Over the last decade, this technique has opened up new avenues of research that are focused on harnessing the benefits of other material systems (e.g., group III–V materials for optical gain) alongside the superior waveguiding qualities and mature processing technology of silicon. Heterogeneous integration can thus be used when strong magnetic materials (e.g., garnets) are the sensing elements (which cannot be achieved with fibers). Cerium-doped yttrium iron garnet (Ce:YIG) is one such magnetic material, with a high Faraday rotation and low optical losses. It has been integrated with silicon to form magneto-optic waveguides (see Figure 2) that can be used for magnetic field sensing. Ce:YIG has a maximum Faraday rotation of almost 8000rad/m when the magnetization is fully saturated. Depending on the direction of the magnetic field, the material will either saturate at an applied field of 0.2T (out-of-plane magnetic field) or of 0.005T (in-plane magnetic field).7 Our measurements show that the Verdet constant of Ce:YIG is nearly 10,000rad/Tm for the out-of-plane field configuration and almost 1,000,000rad/Tm for the in-plane configuration. This means that Ce:YIG waveguide-based sensors can potentially have sensitivities that are several orders of magnitude better than their fiber counterparts. 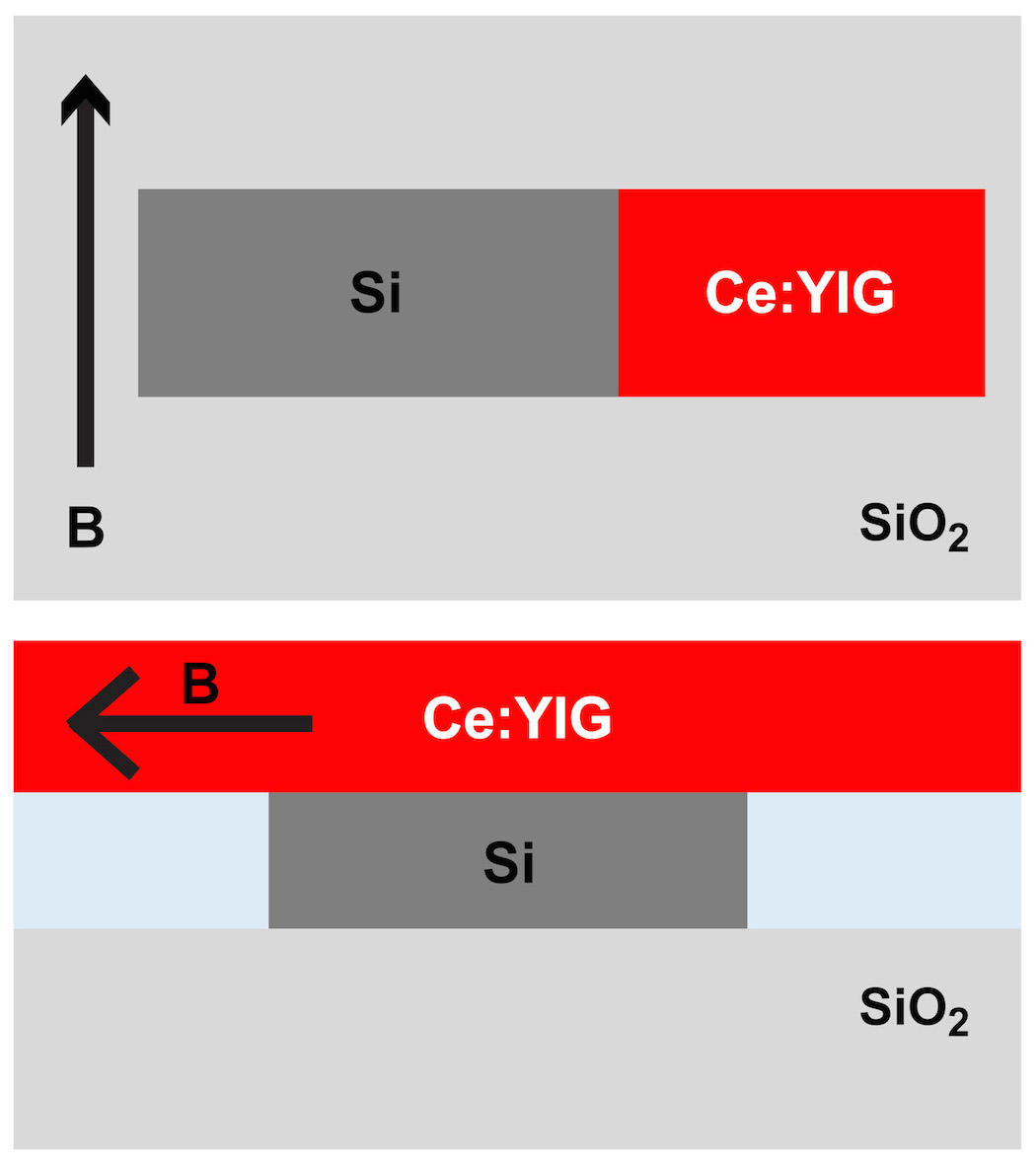 A disadvantage of magneto-optic waveguide sensors, however, is that they are always sensitive to fields in a particular orientation. Unlike fiber sensors, they cannot be wrapped around a current-carrying wire. This means they are unaffected by background magnetic fields. A waveguide-based sensor will normally pick up stray fields (e.g., the Earth's magnetic field), and a differential configuration—with two sensors—is therefore needed. Nevertheless, integrated magnetic sensors may open up new possibilities for applications that require sub-picotesla sensitivity. Furthermore, a number of photonics components—referred to as the Sagnac ‘front-end’—are needed to drive the current sensor. These lasers, photodetectors, and modulators can also be integrated on silicon through heterogenous integration. This is extremely promising because it could potentially reduce the size, power, and cost of the sensors. We have shown that this front-end PIC (see Figure 3) can be used with Tb-doped fibers after packaging. We are also able to use multiple die bonding to integrate this PIC alongside the Ce:YIG waveguides on the same chip.8

In summary, we have demonstrated that using higher Verdet constant materials may open up new applications for ultra-compact, highly sensitive optical current sensors. This can be achieved through terbium-doping of fibers, or through the use of cerium-substituted yttrium iron garnet waveguides. We have also used photonic integrated circuits to develop a suitable front-end for these sensors. Such heterogeneous integration offers a path toward reduced cost, power, and size for the devices. In the near future we plan to test the performance of the Tb-fiber back-end when it is packaged with our integrated front-end PIC. We also plan to develop processes that will lead to integration of Ce:YIG within the heterogeneous silicon platform.

Duanni (Tony) Huang received his BS in electrical engineering from the Massachusetts Institute of Technology in 2013. He is currently pursuing an MS/PhD in electrical and computer engineering, with a focus in electronics and photonics. His current research interests include the integration of magneto-optic devices with silicon photonics.

Sudharsanan Srinivasan received his bachelor's degree, with a specialization in engineering physics, from the Indian Institute of Technology in 2009. He obtained his PhD from UCSB in 2015 on the topic of heterogeneous integration for reduced phase noise and improved reliability of semiconductor lasers. He is now working as a photonics systems engineer at Aurrion Inc.

John Bowers holds the Fred Kavli Chair in nanotechnology, is the director of the Institute for Energy Efficiency, and a professor in the Departments of Materials and of Electrical and Computer Engineering at UCSB. He is a cofounder of Aurrion, Aerius Photonics, and Calient Networks, as well as a member of the National Academy of Engineering, and a fellow of the IEEE, OSA, and the American Physical Society. He has also received the OSA Tyndall Award, the OSA Holonyak Prize, and the IEEE LEOS William Streifer Award.

Paolo Pintus received a master's degree in electronic engineering from the University of Cagliari, Italy, in 2007, and a PhD in innovative Technologies of ICT and Robotics from the Sant'Anna School of Advanced Studies in 2012, where he is now a research fellow.