The photorefraction of IR light and astigmatism from a cylindrical lens are used to assess variations in the human eye as a function of perceived depth information.
08 January 2016
Byoungsub Song, Min-Chul Park and Sumio Yano

The human visual system (HVS) plays an important role in the perception and processing of visual information.1 In particular, accommodation in the HVS is intimately linked with the specific function for focusing images on the retina and thus the capture of clear visual information. In addition, depth information can be perceived by controlling the thickness of the eye lens. Studying and classifying the accommodation process is therefore a vital part of understanding the depth cues that lead to the perception of depth information in humans. Three-dimensional display technology can be used to provide 3D information (i.e., depth cues) to viewers. Not all the depth cues necessary for perceiving depth information, however, can be provided by such 3D systems. This can therefore result in misleading depth perception. The accommodation–vergence mismatch is often thought to be an important contributing factor to this problem. This mismatch arises because the vergence of eyes allows depth information from the 3D display system to be fused in a binocular manner, but the accommodation response does not follow the intended depth stimuli. These unnatural viewing conditions can cause visual discomfort or more serious symptoms, such as visual fatigue, headaches, and nausea.2–5 It is thus necessary to measure changes in accommodation responses and evaluate the potential level of visual discomfort that may be caused by 3D display systems.

When IR light is received by eyes, it is imaged at the retina and reflected from it. The reflected IR light is then refracted by the eyes and refocused out of the eye. As control over the thickness of the eye lens is directly related to the accommodation response, measuring the distance to the refocusing point is useful for assessing the accommodation response. For example, measuring a short refocused distance for the IR light indicates that the current accommodation state is suitable for the perception of short depth information.

In this work we present a binocular photorefractive accommodometer, which can be used to measure changes in accommodation responses under natural conditions (e.g., watching a 3D display). Our device is based on the photorefraction of IR light and the concept of astigmatism. We induce both these phenomena with the use of a cylindrical lens and can thus measure changes in accommodation responses and assess the perception of depth information.

The design of our binocular photorefractive accommodometer is illustrated in Figure 1. The instrument consists of an insert part—where the IR light progresses from a light source to the eyes—and an imaging part (where the IR light progresses from the eyes to a CCD camera). The optical paths for measuring the left and right eyes are divided and dealt with individually. Within the insert section of the instrument, the IR light from an LED source is collimated to minimize the loss of light. We also use a hot mirror (which acts as a mirror for IR, but not visible, light) to deflect the IR light in the observer's viewing direction. Meanwhile, in the imaging part of the instrument, we use a beam splitter (which reflects half the incident light and transmits the other half) to reflect the optical path of the IR light in the imaging direction. The cylindrical lens is then used to introduce astigmatism to the IR light wavefront, and the IR light image is finally acquired by the CCD camera. 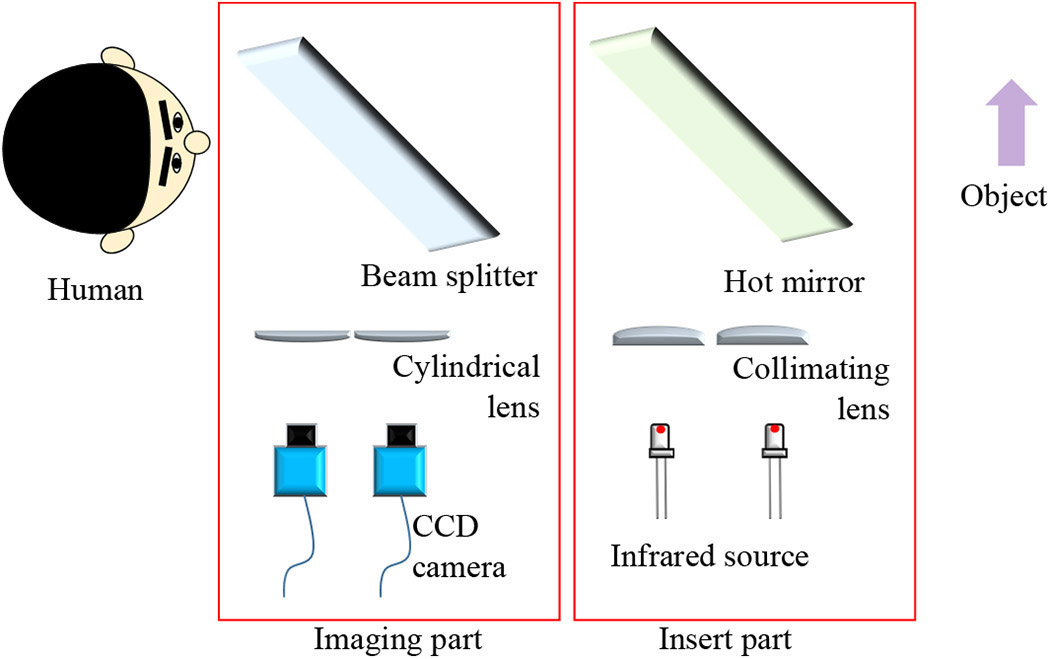 Figure 1. Schematic diagram of the binocular photorefractive accommodometer. The instrument consists of two parts, i.e., the insert part and the imaging part.

In our binocular photorefractive accommodometer, we use the astigmatism rate as a measure of the accommodation response because the reflected IR light is refracted by the cylindrical lens. The lens causes the light rays to be transmitted in the horizontal plane and the refraction of the light in the vertical direction. Indeed, the term ‘astigmatism’ refers to the fact that the focusing points are different in the horizontal and vertical planes. Changes in the accommodation response can only be measured when the refocusing point for the IR light is further from the eyes than the focal plane of the cylindrical lens. Under this condition (see Figure 2), the size of the light spot on the horizontal axis of the focal plane of the cylindrical lens becomes larger when the perceived depth increases (and it becomes smaller in the vertical direction). 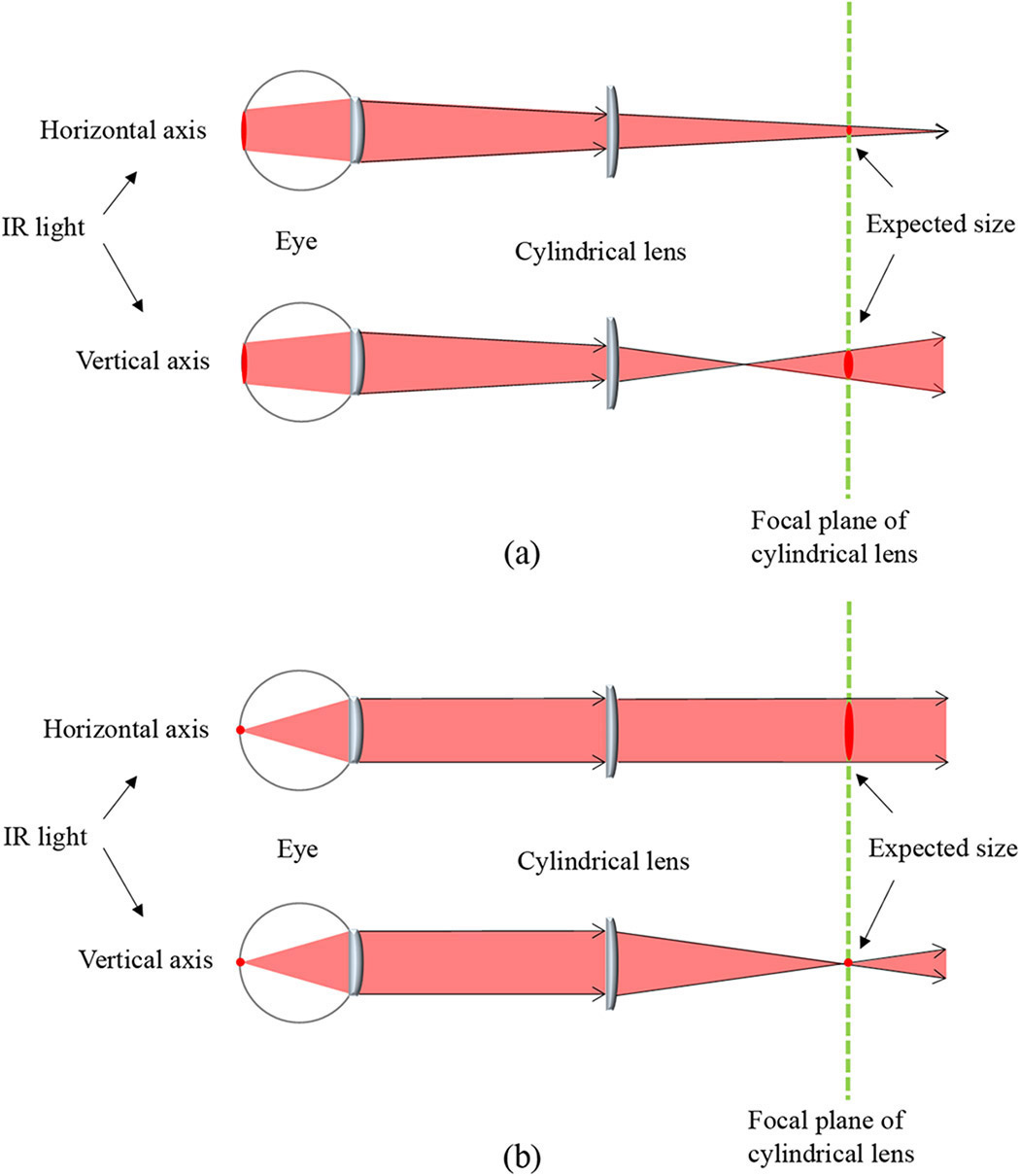 Figure 2. Illustrating the change in the size of the horizontal and vertical axis—caused by astigmatism—when the accommodation response changes to perceive a (a) short and (b) long depth.

In our instrument we also fix the focal plane of the CCD camera to the focal plane of the cylindrical lens (i.e., for acquiring the IR light). We can then calculate the size ratio between the horizontal and vertical axes of the acquired image for each eye. We perform the image acquisition and this calculation in real time. Although the astigmatism rate is not the absolute value of the accommodation response, the change in astigmatism rate corresponds directly to a change in the accommodation response.

This work was supported as part of the Giga KOREA Project, through the Development of Interactive and Realistic Massive Giga-Content Technology (GK15C0100) and the Development of Telecommunications Terminal with Digital Holographic Table-top Display (GK15D0100).