The thermal expansion of ultrastable materials at cryogenic temperatures is of increasing scientific interest and is driven by their technical applications, e.g., for the construction and operation of space-borne telescopes. Such telescopes include the Herschel Space Observatory (operated at 85K),1 the James Webb Space Telescope (to be operated below 50K),2 and the Space Infrared Telescope for Cosmology and Astrophysics (SPICA), which has a desired operating temperature of 5K.3 The thermomechanical characterization capabilities of some of the world's leading institutes were compared in a recent round-robin study (led by the European Space Agency—ESA—and the Centre Spatial de Liège).4 The results of this study, however, indicated a clear lack of high-accuracy measurement capabilities at cryogenic temperatures.

One of the most recent ESA missions (Herschel Space Observatory)5 demonstrated how critical it is to know the exact thermal expansion of materials used in space telescopes. Indeed, the results of simulations performed before the start of the telescope fabrication were not in agreement with the characteristics of the manufactured mirrors. Fortunately, these discrepancies were not discovered in space, but they did still lead to unnecessary delays. To prevent similar problems in the future, in-depth investigations of the material are thus required.

For the design of ultrastable structures it is necessary to characterize the thermal expansion of the materials, with an uncertainty that is below 3×10−9K−1 for the whole in-service temperature range.6 To realize this performance level, we have thus equipped our ultraprecision interferometer at Physikalisch-Technische Bundesanstalt (PTB) with an extended measurement pathway (EMP), as illustrated in Figure 1. This EMP is housed in a separated vacuum chamber. We achieve the cooling with the use of a pulse tube cryocooler that has two cooling stages, and we can thus enable absolute length measurements at temperatures from 7 to 293K.7, 8

In recent work,9 we have used this instrument to make measurements on single-crystal silicon (SCS), which is a common thermal expansion reference material. We conducted these measurements on three different samples that were manufactured from two independent suppliers. The end faces of these samples have been processed so that they are almost perfectly parallel and high optical quality was achieved. Optical quality is also essential for the end plate (also made of SCS), onto which the samples are connected by ‘wringing’ (optical contacting). In our experiments, we surrounded the samples with a copper shield and performed the measurements under a low-pressure (about 1mbar) helium atmosphere (i.e., which supports a homogeneous temperature distribution). In addition, we used temperature sensors (situated in/near the samples) that we had calibrated at PTB. We found that the temperature measurement uncertainty increased from 15mK at a few Kelvin, to 25mK at 293K. Our measurements were performed on different shaped samples, i.e., two samples with length of 35mm and a cross section of 9×20mm, and a third sample with a length of 30mm and a cross section of 10×10mm.

We determine the coefficient of linear thermal expansion (CTE), or α(T), of our samples according to the International Organization for Standardization's definition:10

where T is temperature, l(T)is the temperature-dependent length, and lRTis the length at room temperature (i.e., at 293.15K). This definition deviates slightly from the physical CTE because of the use of lRT over the whole temperature range. For our SCS samples, however, these deviations are less than 3×10−10K−1over the considered temperature range. To determine the CTE according to Equation 1, the functional dependence of the length on the temperature also needs to be known. This can be estimated by fitting an appropriate function to the measurement data. In the normal approach, polynomials are thus fitted to several regions in the data. In our method, however, we use a functional description—derived from physics—for the whole temperature range. In our simple model, in which we neglect phonon dispersion, we can express the CTE according to the Grüneisen equation11(i.e., as proportional to the specific heat per unit volume at constant volume). Furthermore, a simple model for the temperature dependence of the specific heat is provided by the Einstein model. An appropriate fit function for the CTE can thus be built by summing several of these so-called Einstein terms, each of which represents a peak in the phonon density of states. By integrating the CTE fit function, we obtain the fit function for our length measurements. This fit function matches our data very well, within the expected uncertainty (on the order of about 1nm).

Figure 1. Schematic diagram of the beam path in the ultraprecision interferometer at Physikalisch-Technische Bundesanstalt. Prismatic samples are placed in the extended probe beam, shown on the left. The temperature of the samples can be varied between 7 and 293K with the use of a pulse tube cryocooler.

Our length versus temperature data for one of the three samples is plotted in Figure 2(a), together with the fit function and the corresponding residuals. As previously noted, these residuals are small compared with the overall uncertainty of the measurements, which demonstrates the appropriateness of the fit function. The corresponding CTE values—given in Figure 2(b)—are obtained from the derivative of the fit, with respect to temperature. We find that the results for all three SCS samples agree very well within their uncertainties. Indeed, the largest difference between any two of the measurements is less than 3×10−9K−1. Our data agrees well with other high-accuracy measurements that have been performed at the Jet Propulsion Laboratory and the National Metrology Institute of Japan in the past decade. We find, however, that there is a mismatch with reference data—recommended by the Committee on Data for Science and Technology in 198512 for polycrystalline silicon—in the 90–230K temperature range.13 As SCS is commonly used as a reference material for thermal expansion studies, we suggest, therefore, that the results of our work9 should be used as updated reference information for thermal expansion coefficients in the 7–293K temperature range. 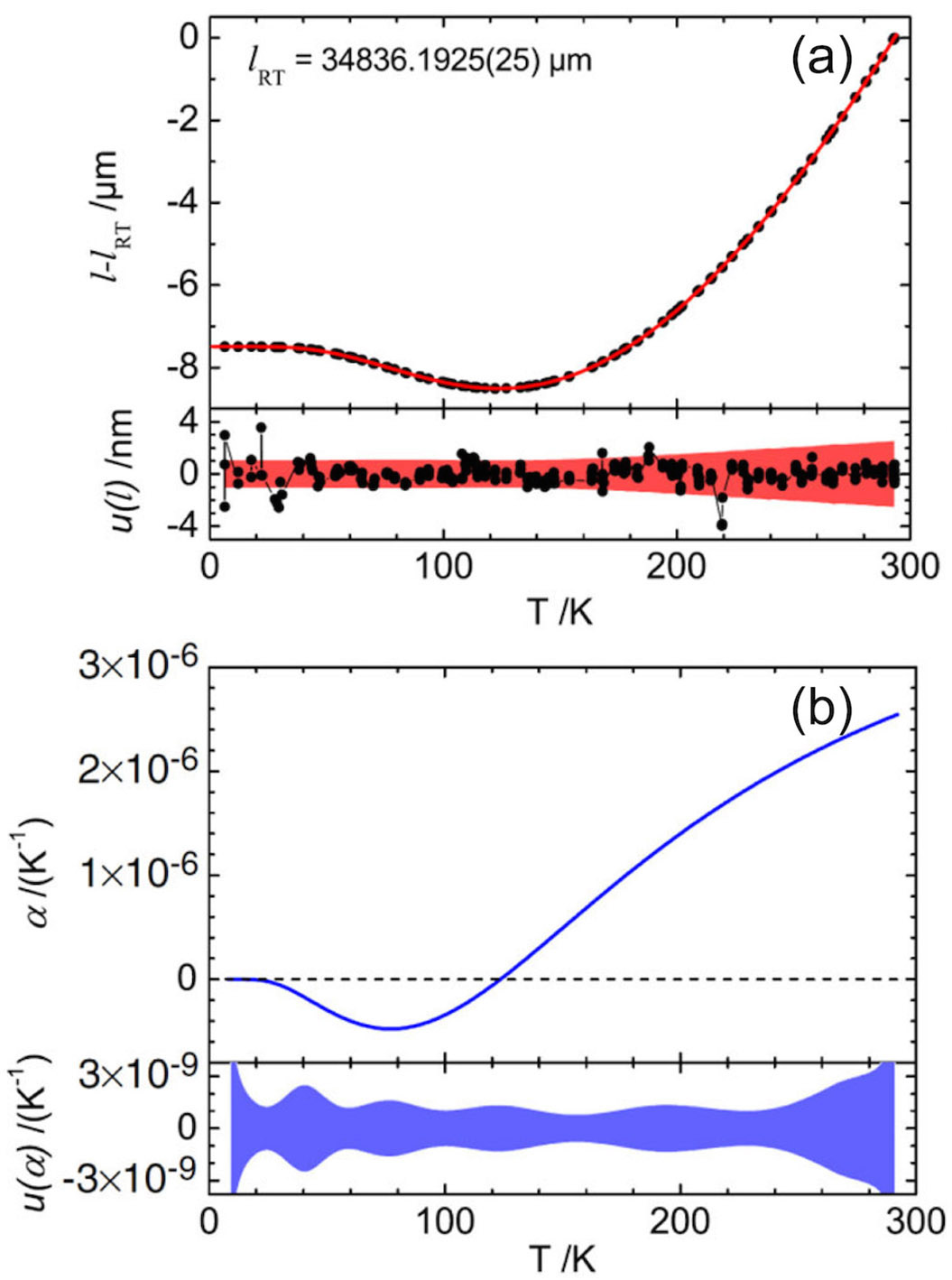 Figure 2. (a) Length (l) versus temperature (T) measurement results for one of the single-crystal silicon samples. The red line indicates the fit to the data, and the residuals (u) are shown in the bottom panel. These residuals are small compared with the overall uncertainty of the measurements (red region). lRT: Length at room temperature. (b) The corresponding calculated coefficient of linear thermal expansion (α) values for the data shown in (a). The overall uncertainty of the data is shown in the bottom panel.

We have presented a new, highly accurate method for characterizing the thermal expansion of ultrastable materials at cryogenic temperatures. We have used an ultraprecision interferometer, equipped with an extended measurement pathway, to obtain absolute length measurements of single-crystal silicon samples. We then use a physically motivated approach to calculate the coefficient of linear thermal expansion for the measured samples over a temperature range of 7–293K. Our future research in this field will be focused on the investigation of other materials and further optimization of measurement procedures.

René Schödel obtained his PhD in 1999 from the Humboldt University of Berlin, Germany. He joined PTB in 2000 to work on making ultraprecise length measurements using optical interferometry. Since 2005 he has been a working group leader and the head of the Interferometry on Material Measures department since 2010.

Thomas Middelmann has been at PTB since 2008. He received his doctor of science degree in physics from the University of Hannover in 2013 for his work on the high-accuracy correction of blackbody radiation shift in optical atomic strontium clocks. In 2012 he joined the Interferometry on Prismatic Bodies group at PTB, where he worked on high-accuracy measurements of thermal expansion in ultrastable materials. Since 2015 he has been part of a trainee program for young scientists at PTB.