DNA, the fundamental biomolecule of life, is constantly subject to damage that threatens the vitality of cells and the integrity of the genome. Without enzymatic intervention, this damage can produce mutations that lead to cancerous tumors. Furthermore, many current and developing treatments of cancer and disease rely on the generation of DNA damage products, which—from a chemical standpoint—are very subtle. For example, 8-oxoguanine, the most prevalent oxidative DNA damage product, involves the addition of a single oxygen bond to a guanine base. Remarkably, enzymes in cells recognize and remove this damage and other products of degradation. Biological assays that follow repair of this subtle DNA damage assist cancer studies by advancing fundamental understanding of DNA-protein interactions, connecting damage to diagnosis, and informing options for treatment.

We have demonstrated devices that follow DNA damage repair in real time, with a convenient, low-cost package (see Figure 1).1 In this device, DNA is bound to the circular electrodes of multielectrode chips, and a redox probe at the top of the DNA reports charge transfer through it. DNA is the natural recognition element not only for the binding of repair proteins but also for their repair activity, and it can be synthesized with or without damage/lesion sites to establish controls. Furthermore, DNA can also serve as an electrical transducing element when modified with a redox-active probe and self-assembled on a working electrode, as first demonstrated by the Barton group.2 We have combined these features of DNA, using them to form devices capable of selectively detecting oxidative DNA damage repair (see Figure 1) and changes in DNA stability.1 The devices give a direct measure of molecular-level repair, providing a window into intracellular DNA repair by DNA-binding proteins. 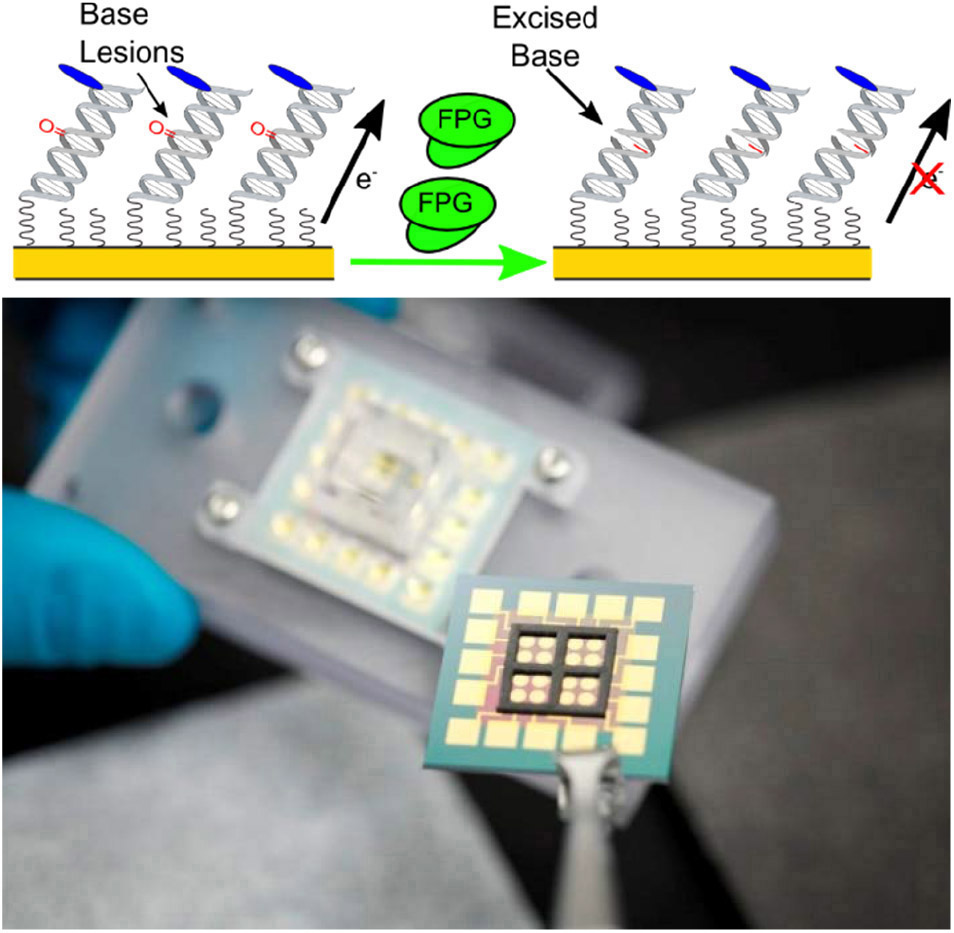 Specifically, we have used our approach to show sensitive and selective electrochemical sensing of 8-oxoguanine and uracil repair glycosylase activity. We produced sensors on electrospun fibers as low-cost devices with improved dynamic range. Our experiments compared electroactive, probe-modified DNA monolayers containing a base defect with the rational control of defect-free monolayers. We found damage-specific limits of detection on the order of femtomoles of proteins, corresponding to mere nanograms of the enzymes. The DNA chips enabled the real-time observation of protein activity, and we observed base excision activity on the order of seconds. We also demonstrated damage-specific detection in a mixture of enzymes and in response to environmental oxidative damage. We showed how nanofibers may behave similarly to conventional gold-on-silicon devices, revealing the potential of these low-cost devices for sensing applications. This device approach enables sensitive, selective, and rapid assay of repair protein activity, allowing biological interrogation of DNA damage repair.

Given the ability of these devices to follow induced oxidative damage, we are further using them to follow DNA-damaging anticancer drug activity. We are working with the group of David Boothman of the University of Texas Southwestern Medical Center to sense DNA repair activity in conjunction with a novel drug therapy that selectively produces oxidative damage of DNA in cancer cells, bringing about selective cancer cell death. We represent key features of a living system to reproduce DNA damaging and repair activity pathways on the chip. Recent results have shown that we can follow specific drug-induced DNA damage excision and subsequent DNA repair with our devices. Furthermore, the multiple electrodes of the chip allowed us to perform controls of each associated enzyme and to obtain high statistical confidence of results. Given this success, we have launched studies of other DNA damaging drugs to explore the generality of this technique.

In summary, we have designed and fabricated low-cost devices that are capable of electrochemical sensing of 8-oxoguanine and uracil repair glycosylase activity. Ultimately, in addition to their utility in bioassays of DNA-protein interactions, our devices have potential in a number of applications for public health, and our future work will focus on realizing these. The prevalence of high damage repair sites can be an indication of cancers and disease states, and these devices could provide statistically significant diagnosis. Additionally, as a number of cancer treatments involve DNA-damaging agents, our devices can be used to improve treatment outcomes. These devices could be used to sample the activity of multiple drugs with a small volume patient sample, enabling a tailored treatment based on DNA-damaging effectiveness. Similarly, they may also be used to follow the course of cancer treatment through characteristic measures of enzymatic activity of cancer cells versus healthy cells.

Jason Slinker completed a PhD in applied physics under George Malliaras at Cornell University, and postdoctoral study under Jackie Barton of Caltech. He is now a professor of applied physics, studying organic optoelectronics and biological electronics.