Imaging charge and spin transport at high density in semiconductors

The numerous investigations of charge and spin transport aimed at applications such as spin lasers and spin field-effect transistors have mostly laid emphasis on ‘ clean’ experimental conditions. In these scenarios, the charge density is spatially homogeneous,1 enabling observation of pure spin diffusive currents, which is of particular interest to developers of bipolar components and spin lasers. Recently, we revealed novel phenomena in spin-dependent transport in high-density carrier conditions, by tightly focusing a circularly polarized laser beam to a diffraction-limited spot, and then imaging the spatial profiles of luminescence intensity and the degree of circular polarization.2 As shown in Figure 1, the decrease in charge and spin density profiles with distance from the excitation spot gives the charge and spin diffusion lengths, respectively. This technique is analogous to continuous wave (CW) measurements of cathodoluminescence intensity profiles,3 and to transient measurements of the spin density profile using Kerr microscopy.4 However, unlike these two techniques, our approach gives access to both charge and spin transport, and is therefore suitable for investigating their possible couplings. Furthermore, we can also explore drift transport (see Figure 2) by applying an electric field. In this work, we describe two examples of novel physical phenomena that we have explored using this experimental technique. 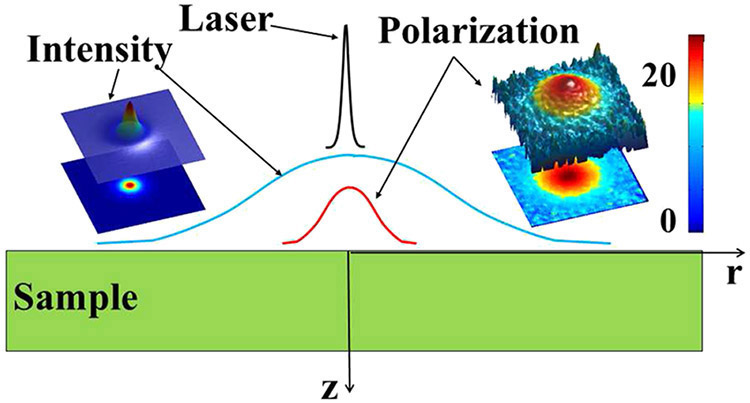 Figure 1. Principle of the experimental investigation of charge and spin transport. A circularly polarized laser beam is focused on the sample to a diffraction-limited spot (z), and the luminescence intensity and polarization spatial profiles are monitored. At low power (so that the spin-polarized photoelectron gas is non-degenerate), the lateral spatial extents of these profiles are the charge and spin diffusion lengths, respectively. r: Distance (from z). 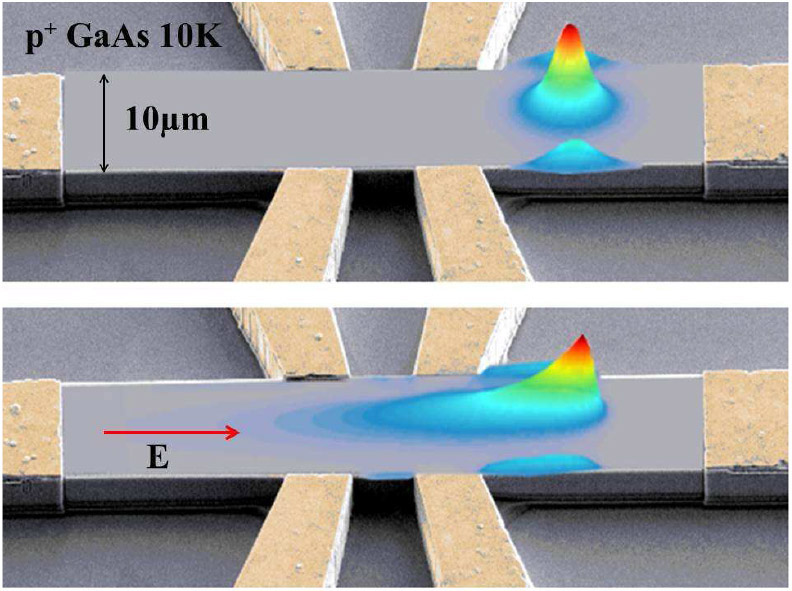 Figure 2. Effect of an electric field (E) on charge distribution, obtained in a Hall bar made with p+gallium arsenide (GaAs) at low excitation power. The top panel (no electric field) shows the experimental intensity profile, along with an electron microscope view of the Hall bar. The bottom panel shows the modification of the latter profile induced by photoelectron drift in an electric field of 400V/cm. (Similar effects are found for the spin distribution).

The first is the appearance of an effective spin-spin coupling, due to ambipolar effects originating from the differential diffusivities of electrons and holes.5 When we increase the pump power, the electron diffusion constant is replaced by an ambipolar one, as shown from the narrowing of the charge spatial profile near the excitation spot.6 Although electrical quasi-neutrality is preserved throughout the sample, an internal electric field builds up. This field induces drift currents toward the excitation spot. The currents are approximately equal for the two spin species, and therefore reduce the electronic polarization at the excitation spot. Figure 3(a) shows this decrease for p-type gallium arsenide (GaAs) (NA≈1017 cm−3) at 300K, which reveals that the polarization at r=0 decreases by almost a factor of six to ∼2% at the maximum accessible power (3mW). This effect is not caused by a decrease in the spin relaxation time, since the spatially averaged polarization does not change with excitation power: see Figure 3(a). Figure 3(b) shows the profiles calculated by numerically solving the coupled diffusion equations for electronic spins + and −. 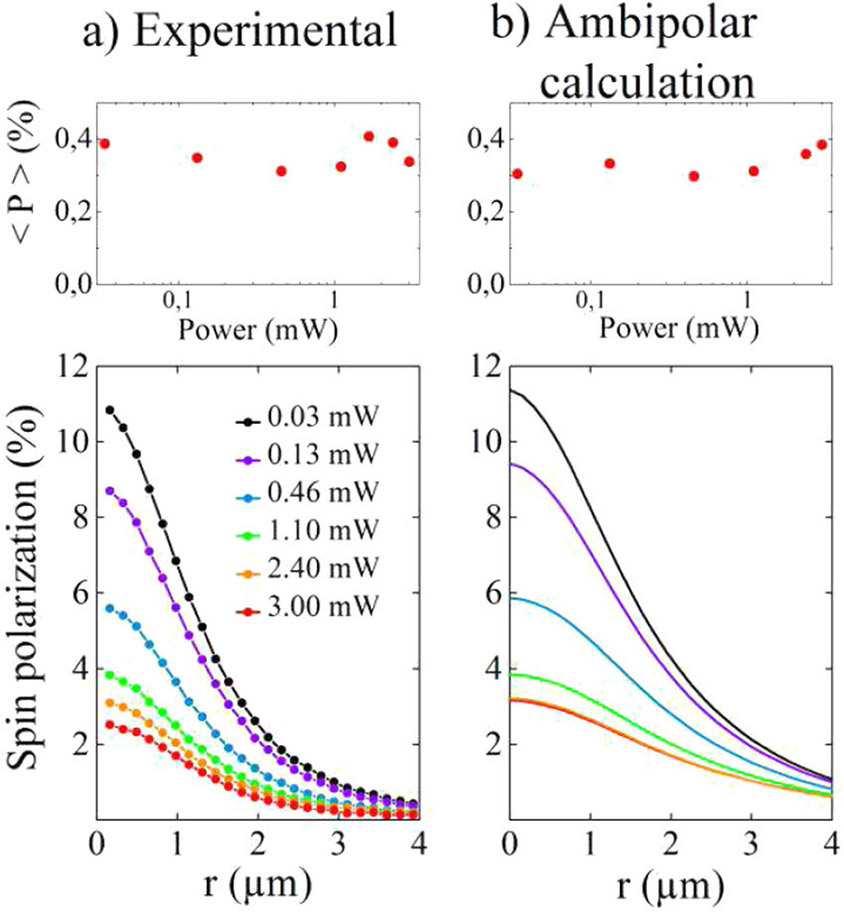 Figure 3. At high electronic concentrations, electrostatic ambipolar interactions between electrons and holes tend to keep electrons at the place of excitation, and therefore reduce their local spin polarization. This is illustrated for p-doped GaAs (NA≈1017cm−3) at 300K from measurements of the spin polarization profiles for increasing excitation powers. (a) The reduction of polarization at the excitation spot induced by these ambipolar effects. The spatially averaged spin polarization is unchanged. (b) Calculated results using a resolution of the diffusion equation.

The second physical phenomenon we explored concerns the appearance of a charge coupling effect due to the Pauli principle in p-type GaAs (NA≈1018 cm−3) at 15K.7, 8 At low excitation power (see Figure 4, left), the polarization profile exhibits a featureless decrease with distance, characteristic of spin relaxation during diffusion. We observe the effect of the Pauli principle under degeneracy, i.e., for an increased excitation power P, such that the electronic concentration is larger than the effective density of states of the conduction band. For P=2.55mW (see Figure 4, right), there appears a counterintuitive volcano-like shape, reflecting how spin polarization initially increases with diffusion. A simple interpretation of this effect, illustrated in Figure 4 (center), is that, under degeneracy, the diffusion constant is larger for majority spin electrons than for minority. Thus, the more efficient removal by diffusion from the excitation spot induces a depletion of majority electrons, with an accumulation some distance away from this spot. Our interpretation of these findings can be found in detail elsewhere.8 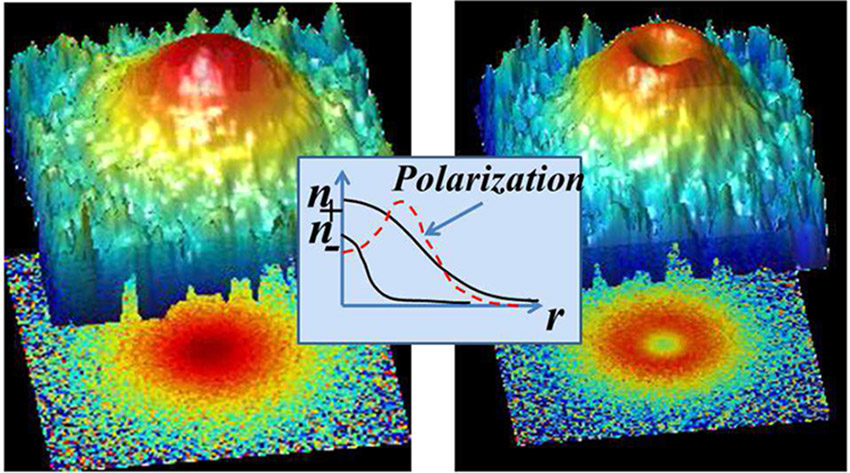 Figure 4. Left: Polarization profile (17×17μm2) observed at low excitation power in p+GaAs at 15K, revealing a decrease with distance to the excitation spot due to spin relaxation during diffusion. Right: Upon increase of excitation power, a volcano-like profile is observed. This is because, as shown elsewhere7, 8 (and illustrated in the center panel), the electron gas becomes degenerate, so that the diffusion constant becomes larger for majority spins than for minority ones. This produces a selective depletion of majority spins from the place of excitation, leading to a local decrease of electronic spin polarization.

In conclusion, our studies will enable other investigations seeking to demonstrate new effects of spin transport at high density. Our future work may explore the spin dependence of currents induced by the spatial gradient of the electronic temperature, and of the photoelectron mobility. It would also be interesting to extend these studies to systems of lower dimensionality, such as semiconducting quantum wells, quantum wires, or transition metal dichalcogenides.