Guanine as a gate dielectric/passivation layer for graphene-based sensors

The DNA nucleobase guanine can maintain graphene's electrical properties, and may have potential applications in flexible, graphene-based sensors for use on the body.
18 February 2016
Adrienne D. Williams, Fahima Ouchen and James Grote

DNA shows promise as an organic component for biosensors, particularly when it is combined with graphene. Specifically, when deposited onto graphene, DNA has the otherwise irreproducible charge carrier mobilities of the graphene in addition to those of non-uniform DNA films. Our previous studies of these films for biosensor applications identified the DNA nucleobase guanine as particularly resilient. For example, we found that the degradation temperature of guanine (460°C, which we identified by thermogravimetric analysis) is higher than that of DNA, and its other nucleobases thymine, cytosine, and adenine. When we deposited guanine onto monolayers of graphene, we were able to produce films that were not only uniform, but also had reproducible, consistent charge carrier mobilities of the graphene.

In this work, we have sought to maintain the bulk charge carrier mobility of graphene after deposition of the gate dielectric or passivation layer used in the fabrication of transistor devices.1 We introduced a thin film of guanine, deposited by physical vapor deposition, onto layers of chemical vapor deposition (CVD)-grown graphene, and transferred this from thermal release tape onto willow glass, a flexible substrate. We fabricated two test platforms, one with guanine as a stand-alone gate dielectric (the control)—platform A—and the other with guanine as a passivation layer between graphene and poly(methyl methacrylate) (PMMA): platform B. Using platform A, we compared guanine with PMMA as a reference gate dielectric, and found that the PMMA reduced graphene charge carrier mobilities at room temperature (see Figure 1). 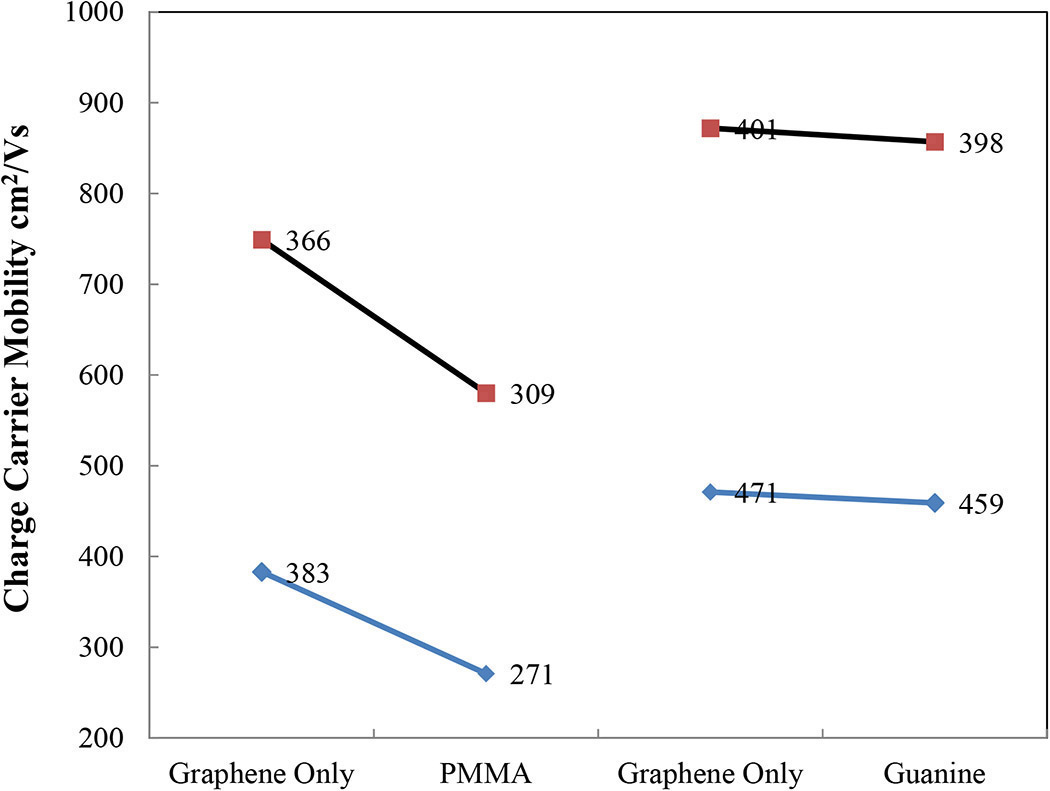 Next, we studied the stability of the graphene on willow glass at room temperature in air for up to six days. This investigation would enable test platforms for transistors in bio-based applications. We determined that the guanine as a passivation layer (platform B) maintained graphene's mobilities (see Figure 3). We took three samples from the same batch of CVD-grown graphene and carried out Hall effect measurements at room temperature in air. We used this characterization technique for the mobility of graphene for all the samples studied.

We compared the current-voltage (I-V) measurements for test platforms A and B (see Figure 4). This determined any type of leakage current typical for direct-current (DC) voltage (which is commonly used for gating organic field effect transistors). Now, in platform A, guanine was the stand-alone gate dielectric, whereas in platform B, PMMA was the gate dielectric layer on top of the guanine-passivation layer. 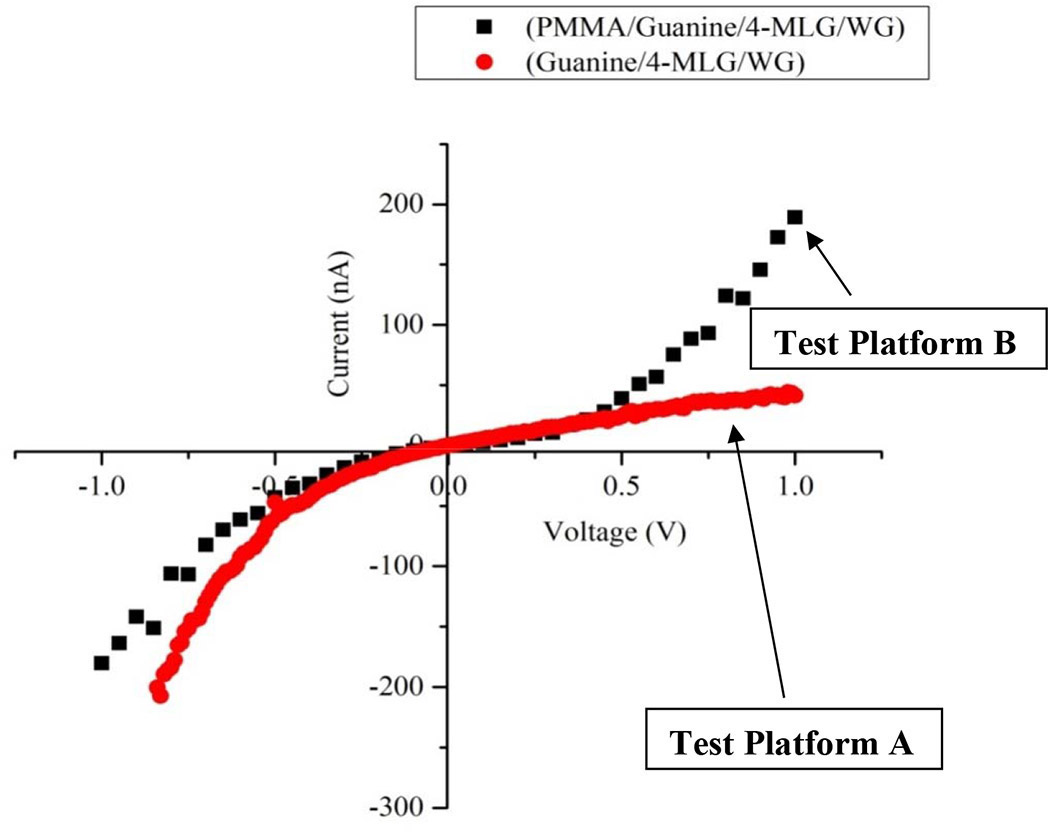 We have successfully shown that PMMA can be used with graphene—a conductive 2D material—and that guanine as a passivation layer is much less conductive, with no shorting through the PMMA at lower voltages. Unlike in platform A, guanine as the stand-alone gate dielectric proved to be a less effective insulator.

Our future research will be to analyze the interfacial layers of the gate dielectric or passivation layer and the graphene, in order to better optimize the performance of such a transistor, with a view to its use as a bio-based sensor. In addition, we will study another DNA nucleobase purine, adenine, as a potential stand-alone gate dielectric and passivation layer. These transistors could have applications in human sweat monitoring. We have also investigated other transport properties, such as charge carrier concentration, conductivity type, and electrical resistivity. This is an important first step to realizing high-performance graphene-based transistors for potential use in bio- and environmental sensors, computer processing, and electronics.

Adrienne Williams received her BS in 2009 from Michigan State University, her MA in chemistry from Fisk University in 2011, and a PhD in environmental sciences with a focus on materials science and engineering physics from Wright State University in 2015. She is a member of SPIE, the Materials Research Society, and the National Society of Black Engineers.

Fahima Ouchen has a PhD in electrical engineering from the University of Montpellier II (Center for Electronics and Micro-optic-electronics) and has performed extensive research in diverse areas with applications in microelectronics and microfluidics (biology and life sciences). She currently holds a research engineer position.