Highly efficient organic light-emitting diodes based on an exciplex

Thermally activated delayed fluorescence can be achieved by the formation of an exciplex via intermolecular charge transfer between a donor and an acceptor to give highly efficient organic light-emitting diodes.
06 January 2016
Ken-Tsung Wong

In our daily lives, we increasingly benefit from new display technologies based on organic light-emitting diodes (OLEDs). In an OLED, electrons and holes recombine to give a mixture of 25% singlet and 75% triplet excitons (or electron–hole pairs). Light can be extracted from singlet excitons by employing a fluorescent emitter. In contrast, triplet excitons do not emit light, owing to the selection rule. The main focus of research so far has been on ways of efficiently recovering energy from triplet excitons. Fortunately, the spin-forbidden process can be effectively relaxed by the strong spin–orbit coupling induced by heavy metals such as iridium (Ir), osmium, platinum, and copper. By spin–orbit coupling, singlet excitons can be downconverted to the triplet state, which enables phosphorescent OLEDs to achieve an internal quantum efficiency (IQE) of 100%. In particular, the great success of Ir-based phosphors has facilitated the commercial use of active matrix OLEDs (AM-OLEDs) in displays. However, the limited resources of Ir and hence concerns about future production costs may hinder the prospects of Ir-based phosphorescent AM-OLEDs.

Recently, in order to produce OLEDs in a more cost-effective way, two upconversion mechanisms—triplet–triplet annihilation and thermally activated delayed fluorescence (TADF)—have been used to give high-efficiency OLEDs with tailor-made organic emitters. In particular, the fact that an IQE of 100% is achievable with TADF-based OLEDs has received considerable attention. The success of TADF relies on the small difference in energy between singlet (S1) and triplet (T1) excited states, which results in efficient reverse intersystem crossing from T1 back to S1. Therefore, electro-generated non-emissive triplet excitons can be upconverted to the S1 state for relaxation to give a high IQE. This can be achieved, in theory, by having a small overlap between the highest occupied molecular orbital (HOMO) and the lowest unoccupied molecular orbital involved in the transition. Accordingly, organic molecules that are capable of exhibiting TADF are composed of weakly coupled electron donor and acceptor components, which induces intramolecular charge transfer (ICT). This makes the design and synthesis of a new donor/acceptor molecule to achieve efficient TADF a nontrivial task that requires careful manipulation of the extent of ICT within the molecular framework. Alternatively, TADF can be achieved by the formation of an exciplex via intermolecular charge transfer between physically blended electron donor and acceptor molecules (see Figure 1). The realization of this simple strategy has attracted much attention in applications in OLEDs.1–4 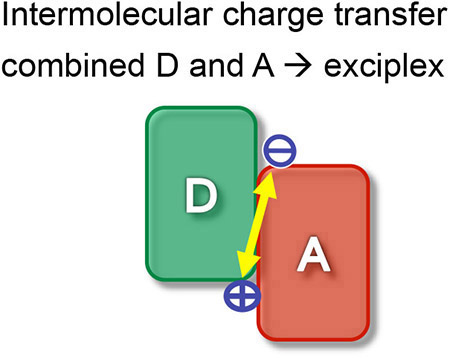 Figure 1. Formation of an exciplex at the interface between a donor (D) and an acceptor (A).

By the judicious selection of donor and acceptor materials, OLEDs with exceptionally high electroluminescence (EL) efficiencies have recently been obtained. The EL efficiency of an exciplex-based OLED can be significantly improved by employing an appropriate combination of donor and acceptor based on the following three criteria. First, the donor and acceptor must permit high hole and electron mobility, respectively, to enable a sufficient number of charge carriers to reach the interface. Second, charge carriers must be able to accumulate in the interfacial region owing to large differences between the frontier energy levels of the donor and the acceptor, which leads to a high probability of electron–hole recombination to generate S1 and T1 states. Finally, and more importantly, the triplet energies (ET) of the donor and acceptor need to be higher than that of the exciplex to confine the electro-generated triplet state within the interfacial region. Consequently, the non-emissive T1 state can predominantly shuttle back to the emissive S1 state, leading to an exciplex OLED with high efficiency.

For example, we obtained a bilayer exciplex-based yellow OLED with an external quantum efficiency (EQE) of 7.7% by combining a triazine-based electron-transporting material (ETM)—2,4,6-tris[m-(1-pyrazolyl)phenyl]-1,3,5-triazine (3P-T2T)—and a typical carbazole-based hole-transporting material (HTM)—tris(4-carbazol-9-ylphenyl)amine (TCTA)—because of their unique electronic properties and high values of ET: see Figure 2(a).5 Peripheral modification of 3P-T2T led to a new ETM, 2,4,6-tris[m-(diphenylphosphinoyl)phenyl]-1,3,5-triazine (PO-T2T), which gave rise to a sky-blue exciplex with an EQE of 8.0% in combination with an HTM with a high triplet state, 1,3-di(carbazol-9-yl)benzene (mCP): see Figure 2(b). The emission colors of exciplexes of PO-T2T together with other HTMs with different HOMO energy levels can cover a wide range from sky-blue to red. In addition, we have produced a tandem white OLED by stacking a blue exciplex based on PO-T2T/mCP and a yellow exciplex based on PO-T2T/9,9-bis[4-(di-p-tolyl)aminophenyl]fluorene to give a maximum EQE of up to 11%, which is the highest EQE recorded for a white OLED using pure fluorescence.6

An exciplex can not only serve as an efficient emitter but also as a host material for phosphorescent or fluorescent emitters (see Figure 3). For example, the high emission energy of a PO-T2T/mCP exciplex is sufficient to confine the typical blue phosphorescence of bis[2-(4,6-difluorophenyl)pyridinato]-(picolinato)iridium(III) (FIrpic). A FIrpic-doped device with a PO-T2T/mCP exciplex as a host can provide an EQE of up to 30.3%.7 More importantly, the roll-off in efficiency is limited: we achieved an EQE of 29.4% at a brightness of 10,000cd/m2. We attribute the high efficiency of this blue device to the balance of charge and efficient energy transfer in the emitting layer. In addition, a 3P-T2T/TCTA exciplex has been used as a host to produce a red OLED with an EQE of up to 10.15%, using 4-(dicyanomethylene)-2-tert-butyl-6-(1,1,7,7-tetramethyljulolidyl-9-enyl)-4H-pyran as a fluorescence emitter.8 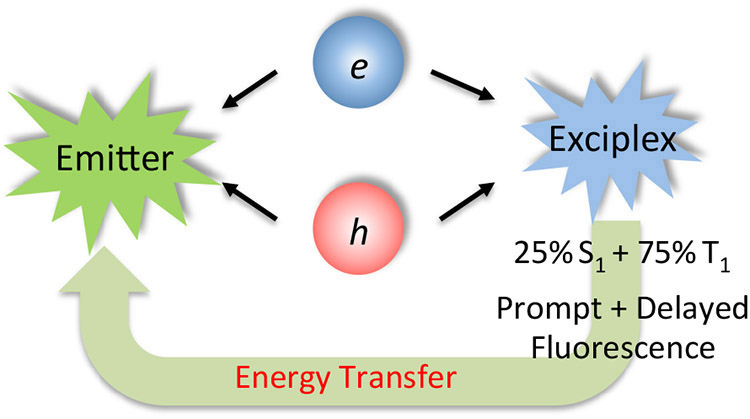 We expect that by focusing on the development of exciplex hosts with higher emission energies, we will have the potential to meet the demand for high-efficiency blue devices, both for OLED displays and lighting technologies.

Ken-Tsung Wong is a professor whose research focuses on the design and synthesis of novel π-conjugated materials for optoelectronic applications such as OLEDs, solid-state light-emitting electrochemical cells, and photovoltaic devices. He has published more than 200 Science Citation Index papers.