Transparent electrodes are an indispensable component of optoelectronics and are used extensively in various technologies (e.g., light displays, ‘smart’ windows, and photovoltaic devices). Among commercialized transparent electrodes, evaporated tin-doped indium oxide (ITO) thin films are the most commonly used. The brittle property and limited sources of indium, however, mean that concerns have arisen regarding the attractiveness of these devices. As such, in recent years there have been increasing efforts devoted to the development of alternative electrodes for the ever-increasing range of optoelectronic applications.1–3

Randomly distributed silver nanowires (Ag NWs) exhibit impressive optical transparency and electrical conductivity, as well as mechanical flexibility. They have thus received a large amount of attention and are becoming one of the most promising alternatives for next-generation flexible transparent electrodes.4 Furthermore, transparent electrodes that are based on Ag NWs have the potential for low-cost production and large-scale solution-based processes. This could help reduce the cost of optoelectronic devices, such as organic solar cells (OSCs), as well as facilitate low-cost fabrication technologies for organic LEDs. Standard (‘as-formed’) Ag NW electrodes, however, have poor conductivity and stability (because of the large contact resistance of the Ag NWs). Previous efforts to produce these electrodes have involved the use of high-temperature annealing, additional material coating, and mechanical pressing.4–7 But these techniques either confine the selection of the substrate, alter the work function of the electrode, or complicate the fabrication process. It is still highly desirable, therefore, to find a simple, low-cost, and efficient method to produce highly stable and conductive Ag NW transparent electrodes at ambient conditions. Moreover, the fabricated devices should be adaptable for varied electrode applications (both anode and cathode).

We have produced a new class of flexible transparent electrodes from a silver nano-network. Furthermore, we have recently shown that these devices can be achieved with the use of two different room-temperature and solution-based chemical approaches. As such, we can produce the silver nano-networks either through selective growth or by locally welding silver material at the junction of the Ag NWs.8

In the first of our approaches—a plasmon-induced chemical reaction—we use the concept of plasmonic resonance to confine the optical field between the Ag NWs. We induce the growth of site-selectable silver nanoparticles under a very low-power density of light irradiation (as low as 5mW/cm2), and without the need for sophisticated equipment and expensive materials: see Figure 1(a).8 In our second method, we use a simple localized chemical reaction that is enabled by the capillary force of a liquid. In this reaction, the precursor solution preferably remains at the junction of the Ag NWs after spin-coating or gas-blowing. This means that the reaction for forming silver solder—see Figure 1(b)—is favored.9 The silver nanoparticles or the crystalline silver solders thus reinforce the contacts between the NWs, and we are able to produce a silver nano-network that exhibits very good optical-electrical properties compared with commercial ITO. 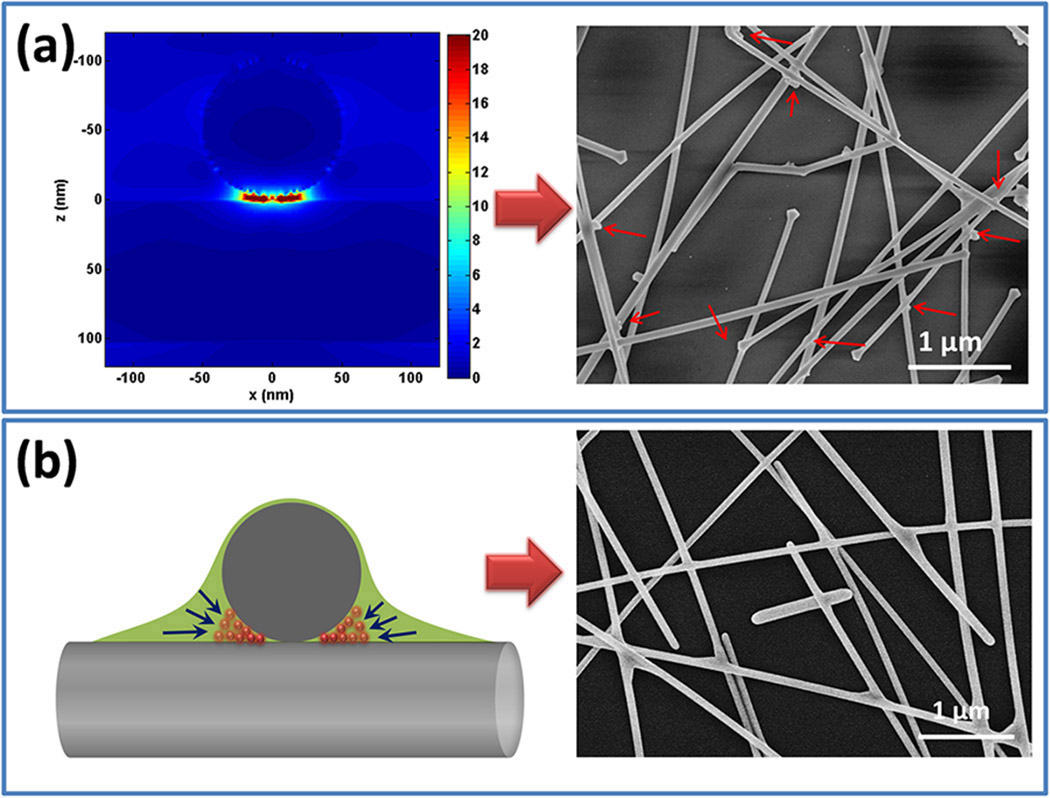 The operational stability of an electrode that is under continuous external electrical bias is of primary importance in practical applications. Compared with typical Ag NW electrodes that are post-treated by thermal annealing at different temperatures—see Figure 2(a)—our silver nano-network electrode has a much more stable performance. This is because we avoid rapid heat accumulation and breakdown at the junction regions. We have also observed a similar trend—see Figure 2(b)—for silver nano-network electrodes that are prepared from Ag NWs with different diameters. As such, we have demonstrated that silver nano-network transparent electrodes prepared using our proposed chemical treatments exhibit operational stability superior to that of standard devices.

Figure 2. (a) Resistance variation (arbitrary units) of Ag NW electrodes prepared by thermal annealing at different temperatures, and from our silver nano-network under continuous external electrical bias. (b) The stability of Ag NW (with different diameters) electrodes that are produced with (w) and without (w/o) chemical treatment under continuous external electrical bias. Rapid increases in resistance indicate the breakdown of Ag NWs at the junction region.

A unique feature of our silver nano-network is that it can be peeled off of a substrate when it is immersed in an aqueous solution. We can therefore easily transfer the nano-network—see Figure 3(a) and (b)—to various substrates, e.g., glass, polyethylene terephthalate, or polydimethylsiloxane. We then use a lamination process to apply the nano-network as the top electrode of optoelectronic devices. To use the nano-network as a bottom electrode, however, it is necessary to overcome the critical issue of surface roughness. Large surface roughness values (especially for silver nano-networks produced from larger-diameter nanowires) can easily cause direct contact between top and bottom electrodes and thus introduce leakage current for thin-film (e.g., organic) devices. To address this electrical shorting issue, we have introduced silica (SiO2) nanoparticles (with diameter comparable to that of the nanowire) to fill the voids within the silver nano-network and without altering its electrical properties, as illustrated in Figure 3(c). As a proof of concept, we have produced OSCs that were fabricated on a composite electrode (i.e., from a silver nano-network that contained SiO2 nanoparticles). With this prototype—see Figure 3(d)—we can achieve power conversion efficiency comparable with commercial ITO substrates. 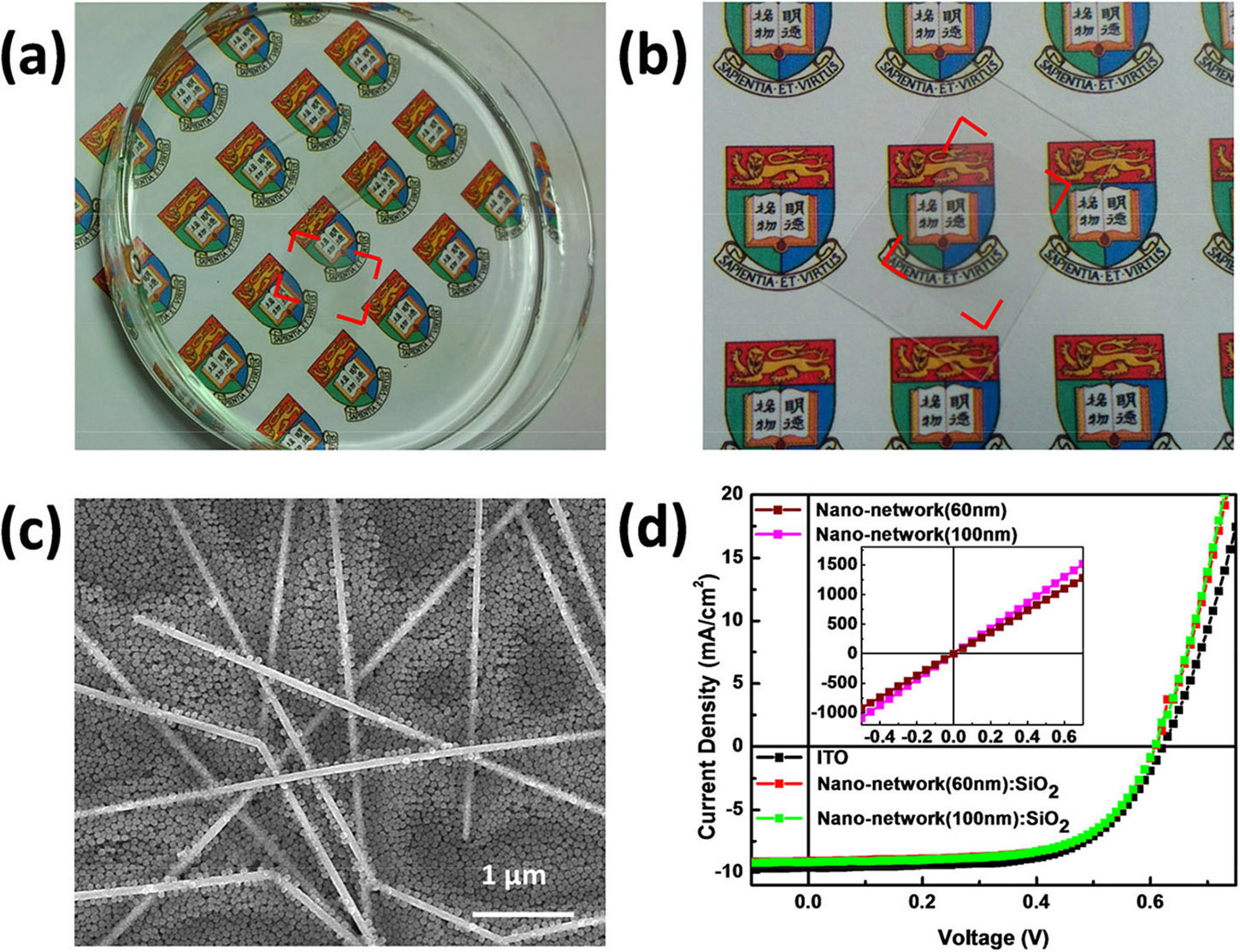 Figure 3. Photographs of a silver nano-network (a) floating on the surface of water and (b) transferred to a polyethylene terephthalate surface. (c) SEM image of the silver nano-network electrode after being coated with silica (SiO2) nanoparticles to reduce its surface roughness. (d) Photovoltaic performance of devices fabricated from a commercial tin-doped indium oxide (ITO) substrate and different Ag NW electrodes. Inset shows the current–voltage curves of photovoltaic devices produced on a silver nano-network electrode without SiO2 flattening. These results indicate that there is direct contact between the top and bottom electrodes.

In this work we have described a new class of flexible transparent electrodes that are constructed from silver nano-networks. To prepare the nano-networks, we can use two different room-temperature, solution-based chemical processes to selectively weld the silver nanowires. We have also demonstrated that our silver nano-network transparent electrodes exhibit optical-electrical properties comparable with commercial ITO equivalents. For instance, our electrodes have good operational stability under a continuous external electrical bias. Through a proof-of-concept experiment with organic solar cells, we have shown that using our silver nano-network as a top and bottom electrode can produce performance similar to a device on an ITO glass substrate. Our new class of flexible transparent electrodes—with the advantages of reduced sheet resistance and improved operational stability—can therefore be used to advance the applications of low-cost, high-throughput electric and optoelectronic devices. In our future work we will explore the practical applications of our silver nano-networks for touch screens. In addition, we aim to enhance the stability of our nano-networks, which will be beneficial for their use in flexible optoelectronic devices.