Electric discharges play an important role in daily life, e.g., in combustion engines. They are also crucial to several modern technologies, such as micromachining1, 2 and pollution control.3 The possibility of harnessing lightning—the most impressive manifestation of an electric discharge—is a fascinating idea. For several reasons (e.g., the natural beauty of lightning, the intriguing physics associated with its formation, and the number of potential applications), investigating ways to tame electric discharges is an active area of research. Intense laser beams can be used to trigger and guide electric discharges in air. This is possible because of a laser's capability to ionize air molecules. The air then becomes heated, which causes a reduction in the breakdown voltage. A path of least resistance—which the discharge follows—is also created. This concept of guiding electric discharges with intense lasers is more than 40 years old,4 and remarkable results in this field have been achieved at both short and long spatial scales. The long-range experiments, however, face a number of critical issues that prevent the ultimate goal of control over atmospheric lightning.

Until now, laser-guided discharge investigations have relied on standard beams. These are typically obtained by focusing the output of an intense laser source in air. Such beams have transverse profiles—usually Gaussian in shape—and propagate along a straight line. Recently, however, it has been observed that optical beams can behave in much more exotic ways. For example, so-called Airy beams can evolve along a curved trajectory.5

In our work, we have therefore realized a series of experiments in which we demonstrate how intelligent beam shaping can affect a guided electric discharge (i.e., the properties of the laser beam can be transferred to the guided electric discharge). We conduct our experiments at relatively short ranges (i.e., a few centimeters) so that they are unaffected by the critical issues that concern the longer-range experiments. We have recently shown that short-scale electric discharges can be precisely controlled by suitably shaped laser beams. This can allow, for instance, a lightning bolt to travel along a curved path and thus avoid any obstacle placed in its path.6

In our experiments we set two DC-biased electrodes (with nearly 15kV bias voltage) at a fixed distance of 5cm. In normal conditions, no electric discharge occurs between the electrodes because the local field is lower than the breakdown value in air (about 34kV/cm). We then focused—using three different beam shapes—the output of a titanium-sapphire laser (with 100Hz repetition rate, 50fs pulse duration, and up to 15mJ per pulse) to create an ionized plasma channel between the electrodes. We obtained the first, and most common, beam (a typical Gaussian) by using a standard lens (with a focal length of 100cm), and the second—Bessel-Gauss—beam with the use of a conical lens (axicon, with a 10° base angle). For our final beam—a finite-energy Airy beam—we used a properly aligned set of cylindrical lenses.7

The shape of the electric discharge that we recorded for each of the three guiding beams varies significantly (see Figure 1). The segmentation we observe in Figure 1(a) changes with every shot of the laser (the discharge is only active for a limited time after the driving laser pulse, and resumes after each pulse). This indicates that for the Gaussian case, although the discharge is guided, it follows an erratic path. In contrast, the extremely high spatial localization of the ionized channel that is imposed by the Bessel beam—partially blocked by an obstacle in Figure 1(b)—forces the discharge to follow a more deterministic and straight path. Finally, we find that with the use of a curved Airy beam—see Figure 1(c)—the electric spark is guided along a curve. As such, the discharge can avoid an obstacle that is placed along the direct line of sight between the two electrodes. 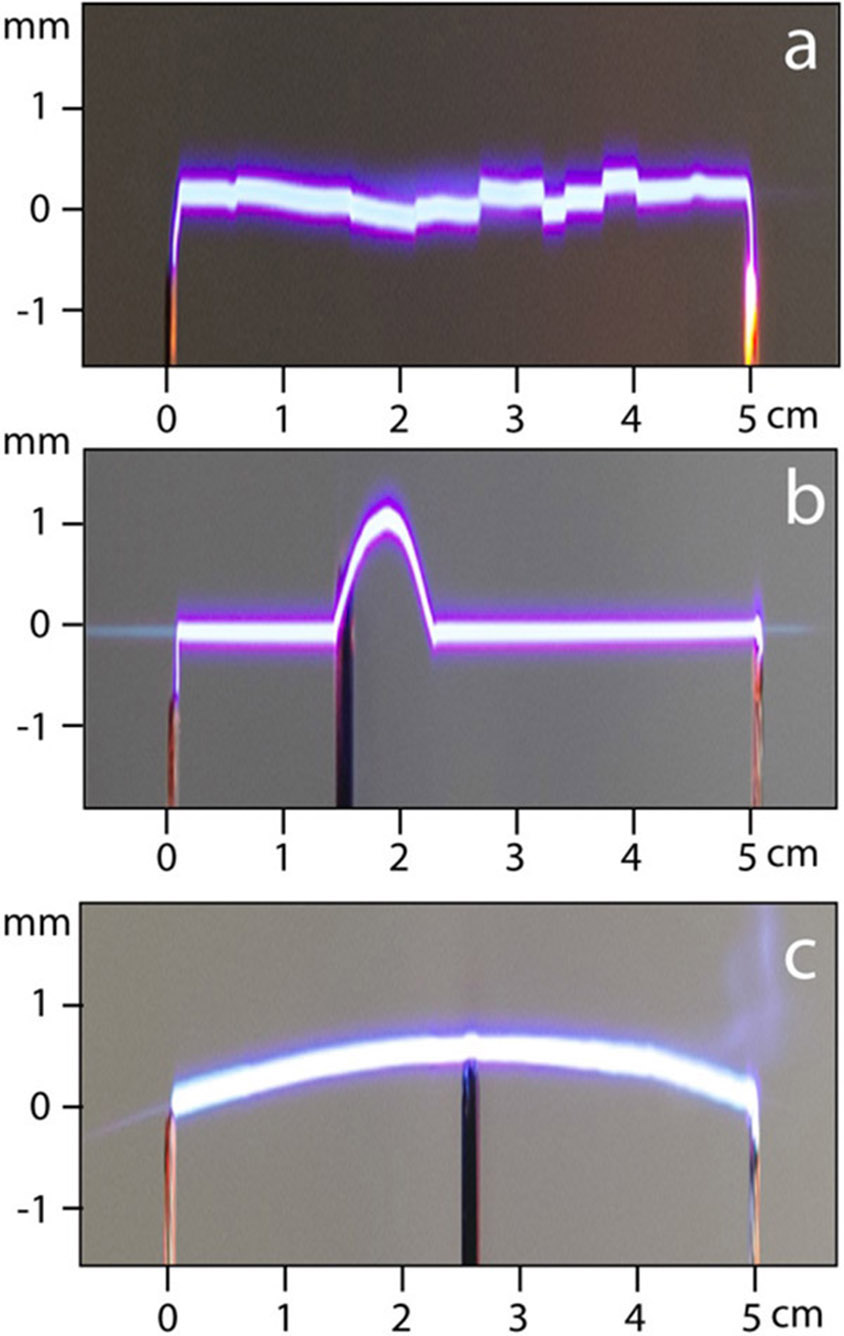 We have also investigated how the self-healing property of Bessel and Airy beams influences the electric discharge. These beams both have the ability to self-reconstruct their intense peak after they have encountered a small obstacle placed in their path. Our results show that when an obstacle blocks the intense portion of a Gaussian beam, however, no discharge occurs because the plasma channel does not form. Conversely, when a stopper is used to block the main peak of an Airy8 or a Bessel9 beam, the peak reforms after a small propagation distance—as shown, for example, in Figure 1(b)—ionization then resumes, and the electric discharge still occurs. Charge can thus be carried to the target electrode even in the case of an obstruction.

In this work, we have conducted a series of experiments to investigate how different laser beam shapes can be used to control electric discharges. Our results shed new light on the intriguing aspects of laser-guided electric discharges and indicate that their precise control can be obtained by properly shaping the laser beam. This technique may find applications in processes that require control over electric sparks (e.g., cutting, welding, and machining). We are currently investigating how spatially shaped laser beams can be used to selectively expose a portion of a material to a plasma, for marking applications. At the same time, we are also studying how the spatial beam shaping affects the temporal properties of the electric discharge. It is our aim to improve the capability of laser pulses to provide the trigger for high-voltage switches.