Research in recent decades has consistently shown that imperfections in nanomaterials, often in the form of defects or edges, can play a crucial role in determining their fundamental properties. This applies to 2D nanomaterials such as graphene, which can be prepared in nanosheets with arrays of holes that penetrate through the entire sheet thickness (typically just one or a few atomic layers). The product is often called holey graphene. The holes are void defects, ranging in diameter from a few to tens of nanometers, much larger than is conventionally considered for point defects (where an atom is either missing from the structure or in an irregular place in the lattice). The presence of holes also provides abundant edge atoms, which for typical intact nanosheets only exist around the sheet periphery. Holey graphene has already shown significant potential for energy storage, catalysis, sensing, transistors, and molecular transport/separation.

BN nanosheets (BNNSs) are isoelectric analogs to graphene, and share similar structural characteristics and physical properties. By contrast, however, BNNSs typically have very low visible absorption, and appear white in color when in powder form (‘white graphene’). They have a large band gap (∼5eV), and are therefore insulating, and they are chemically much more inert than the conductive graphene sheets. ‘Digging’ holes in the BNNS basal plane and introducing enriched edge structures may represent a promising route to modulate the nanosheets' electronic properties, and consequently to enhance their chemical reactivity.

In 2013, members of our team developed a straightforward approach to scalably synthesize holey graphene using silver nanoparticles as the etching catalysts.1 They heated the silver-graphene hybrid mixture in air to around 300°C, and the carbon atoms that were in contact with the silver nanoparticles were removed by oxidation, leaving holes through the graphene surface. Inspired by this success, our team recently found that a similar catalytic oxidation process, albeit at a much higher temperature (>800°C), allows the carving of pits and even holes with geometrically defined shapes and edges on the basal plane of hexagonal boron nitride (h-BN) crystals, the parent material of BNNSs (see Figure 1).2 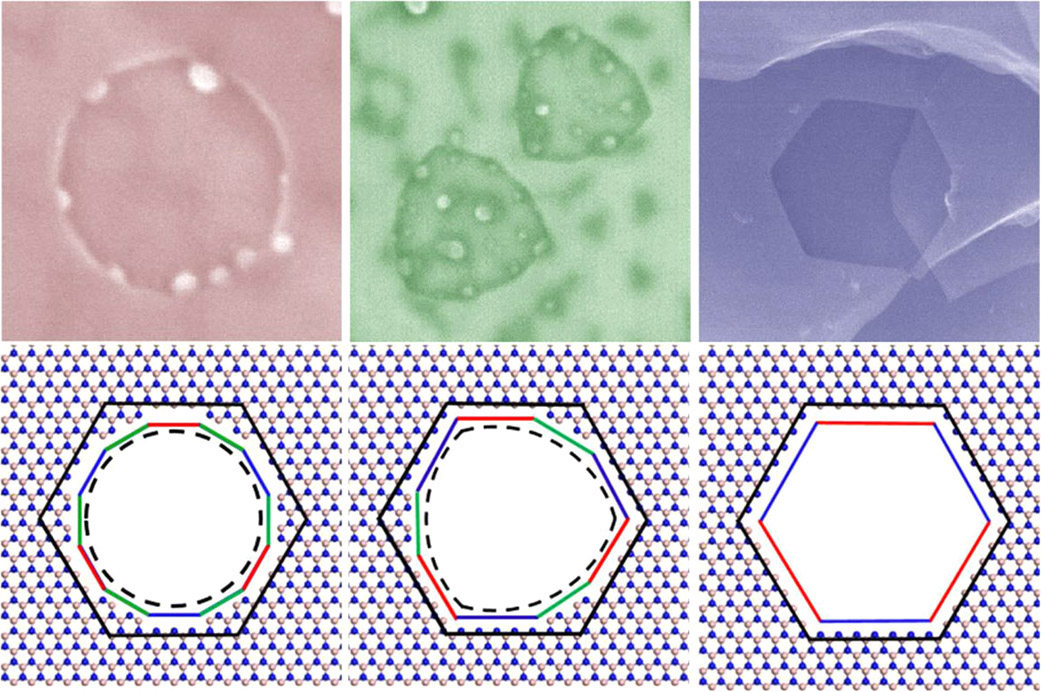 First, we deposited silver nanoparticles onto the basal plane surface of the h-BN crystals. We then subjected the silver-decorated h-BN sample to heating in static air for a specific period, enabling the etching process. Scanning electron microscopy images of etched h-BN showed pits and holes with a variety of interesting shapes, including circles, Reuleaux triangles, and hexagons (see Figure 1). Each pit was associated with silver nanoparticles attached to its edge, suggesting the catalytic role of the silver. The pit shapes were dependent upon both heating time and temperature. When we increased the etching temperature to 1000°C, only the hexagonal pit shapes were present (see Figure 1, top righthand image). We exfoliated the etched h-BN using a common solvent-based sonication approach, resulting in BNNSs with similar structural motifs, some of which appeared holey, with arrays of holes that extended through the entire thickness of the material.

In summary, we successfully synthesized holey BNNSs by heating h-BNs decorated with silver nanoparticles to create pits and holes in a variety of shapes. Our work creates possibilities to further explore the physical and chemical properties of hole- and edge-enriched BNNSs, and members of our team are currently pursuing energy storage applications for holey graphene.3,4 While holey BNNSs might have little direct use for electrochemical energy storage, they may enable other novel applications such as electronics, catalysis, molecular transport, and gas separation. Our future work will focus on investigating these.

Y. Lin acknowledges support from the National Institute of Aerospace. Z. Chen acknowledges grants from the Department of Defense (grant W911NF-12-1-0083) and NASA (grants NNX10AM80H and NNX13AB22A). Y. Liao is supported by a fellowship awarded through the Institute for Functional Nanomaterials at the University of Puerto Rico.

Yunlong Liao holds a BS in condensed matter physics and an MS in computational physics. He is currently a PhD candidate in the Department of Physics. His main research interest is modulating and characterizing 2D nanomaterials for electronic and optical applications.

Zhongfang Chen holds a PhD in physical chemistry and a BS in organic chemistry. He is currently a full professor in the Department of Chemistry, where he applies modern computational tools to investigate rules and trends in chemistry and to design new materials for energy, environment, and human health applications. He also performs experiments under the guidance of theoretical studies.

John W. Connell is a senior scientist in the Advanced Materials and Processing Branch. He received a BS (1982) and PhD (1986) from Virginia Commonwealth University. He has broad research interests in polymer composites, adhesive bonding, surface engineering, and nanomaterials for aeronautics and aerospace applications.

Yi Lin is a senior research scientist and resident in the Advanced Materials and Processing Branch He holds a PhD in chemistry, and his current research interest is the modification of nanomaterials for energy storage, catalysis, and sensing applications.