The challenge of clearly seeing objects hidden by turbid media (e.g., smoke, fog, or biological tissue) has long held the attention of scientists. This problem has major implications in several fields, such as remote sensing and the early diagnosis of diseases. Over the last few years, in the realm of diagnosis, optical imaging has been used to assist clinicians in the detection and evaluation of suspicious lesions. The obvious issue that still needs to be addressed, however, is how to use visible light (i.e., with short penetration depth) rather than ultrasound or x-ray technologies. These current technologies do not permit the early detection of small lesions that are located more than 1–2mm beneath the surface tissue.

There are different approaches for obtaining images of objects that are hidden by scattering media. These methods are based on two different types of photons that can be considered when light propagates through an inhomogeneous medium, i.e., ballistic photons that travel in the incoming direction and diffusive photons that follow an uncorrelated direction at the output point.1–4 The techniques based on diffuse photons, however, have poor resolution, and the ballistic photon-based approaches have limited penetration depths. Recently, a non-invasive approach that uses diffuse photons—while preserving optical resolution—has been demonstrated. This method is based on the ‘memory effect,’ i.e., the angular correlation that is inherent to the speckle patterns generated by photon scattering.2 Current implementations of this technique, however, are restricted to thin scattering media.3

In this work, we present a novel ‘scattering-free’ imaging approach5 that is based on the concept of a single-pixel camera.6 In our incoherent low-intensity technique we use ballistic photons at the illumination stage. We also take advantage of the total flux of photons at the detection step, which means we can achieve an increased penetration depth. 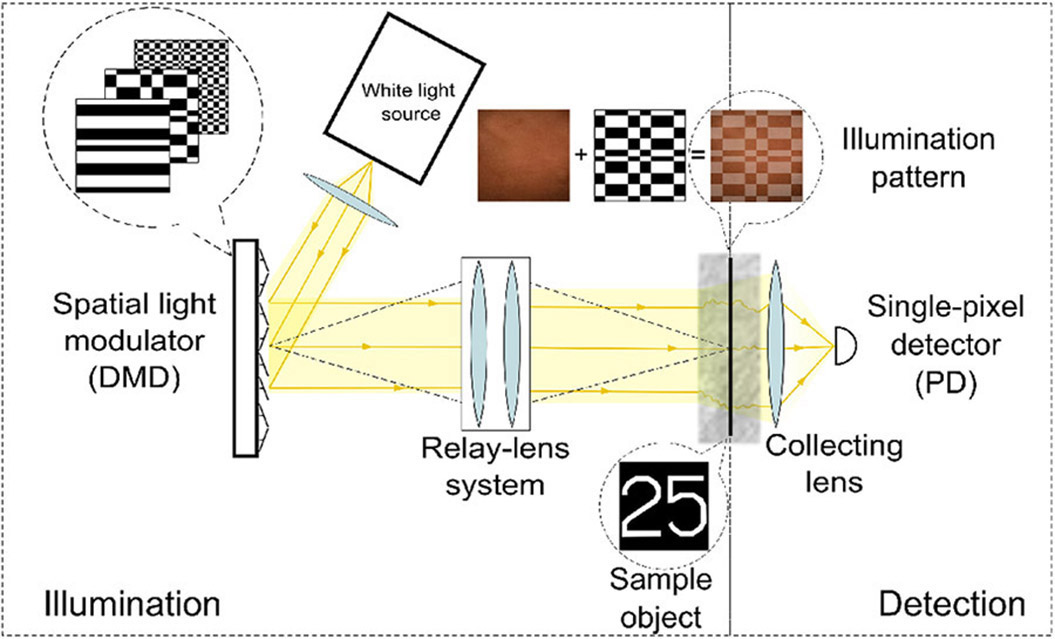 Figure 1. Schematic diagram of the experimental optical setup. Examples of projected patterns are shown in the upper left corner. The weighted superposition of the diffuse background and the illumination pattern (upper right inset) are shown at an increased scale so they are visible. The binary amplitude target is shown in the bottom inset. This sample object is a (about 1cm) square part of a resolution target (NBS 1963A). The unit cell of the patterns that is projected onto the object is 148μm in size.

To demonstrate our approach, we used the experimental setup shown in Figure 1. In this configuration, spatially and temporally incoherent light emitted from a white-light source impinges on a digital micromirror device (DMD) that we use as a spatial light modulator. The DMD produces a set of binary illumination patterns that are projected by an optical relay system onto a high-contrast object embedded in a non-absorbing inhomogeneous medium. The light that hits the object consists of two superimposed components: a strong diffuse halo and a ballistic weak signal that has a spatial structure similar to the projected light pattern. The light that emerges in any direction from the back of the inhomogeneous layer is then concentrated by an optical collecting system onto a photodiode. As the light patterns are projected onto the object, the detector (without spatial resolution) measures only light fluctuations that originate from the weak ballistic signal. We then use the correlation between the illumination patterns and the corresponding intensity fluctuations to reconstruct images that are free of scattering noise.

We have retrieved images of an object sandwiched between two thin holographic diffusers to assess the capability of our technique for imaging through scattering media. The number of illumination patterns in this test was equal to the number of pixels in the recovered image (i.e., 4096 patterns, 64×64 pixels). We used a set of dichroic filters to select three spectral bands in the green, red, and IR wavelengths of the spectrum from our xenon lamp, as shown in Figure 2(a). Our results—see Figure 2(b)—indicate that the conventional images have a higher resolution, but the associated halo (which originates from the thin diffusers) makes it impossible to recover any spatial information about the scene. With our single-pixel approach, however, we can recover the object information. 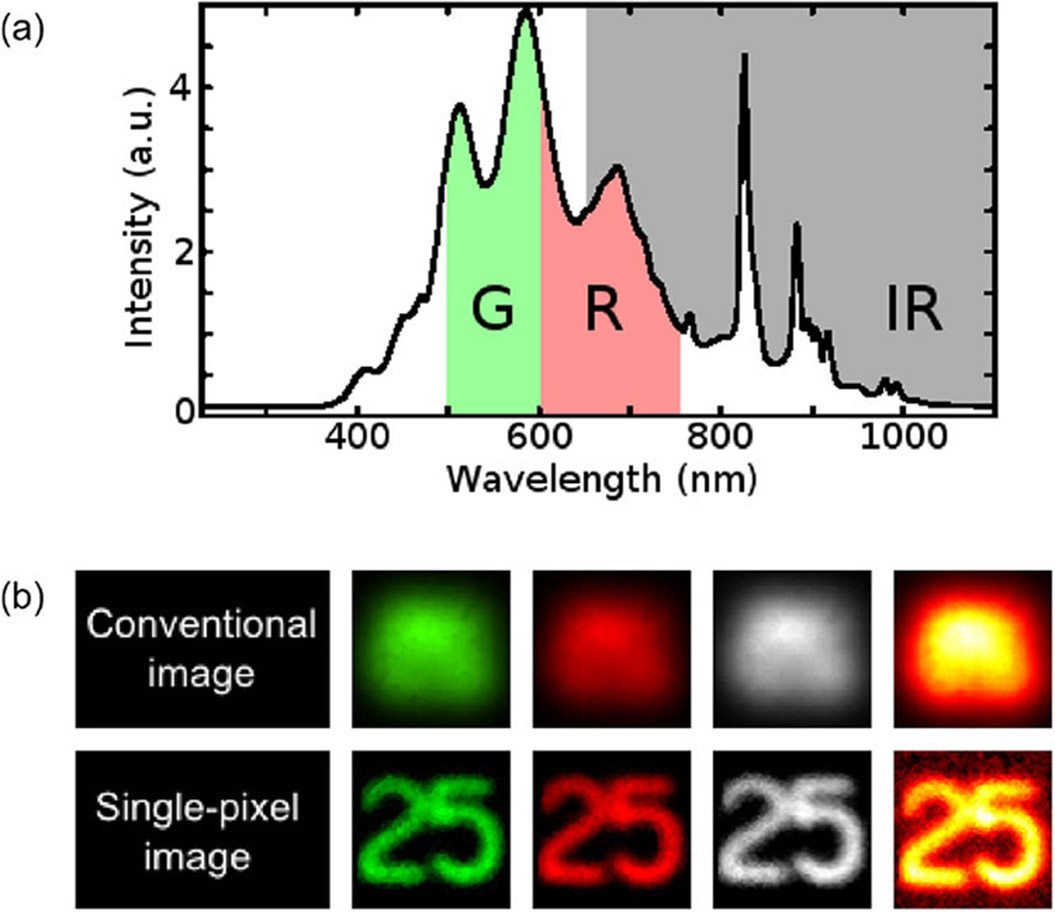 Figure 2. (a) Power spectrum of the xenon lamp used to retrieve images of an object sandwiched between two thin holographic diffusers. A set of dichroic filters were used to select green (G), red (R), and IR spectral bands. a.u.: Arbitrary units. (b) Two sets of pictures captured with a traditional camera (top) and with our single-pixel configuration (bottom). The pseudo-colored image (rightmost column) corresponds to the full spectrum image (i.e., without filters). The G, R, and IR images are also shown (from left to right).

Once we proved that our method works with holographic diffusers, we used it to recover the same object embedded in a biological scattering medium. We sandwiched the object between two layers of chicken breast—see Figure 3(b)—that had thicknesses of 2.84 and 2.92mm, respectively. We did not apply any chemical or mechanical processes to these tissue layers. Our image reconstruction is shown in Figure 3(c), and the capability of our technique for imaging through tissue (in different spectral bands) is illustrated in Figure 3(d). We find that in these thick biological tissues, the photons undergo multiple levels of scattering as they migrate through the medium. This multiple scattering process is different from the scattering mechanism we observed with the thin holographic diffusers. The improvement in our image reconstructions from 650nm illustrates the potential of our approach for imaging in the tissue optical window (i.e., 650–1350nm), where light reaches its maximum penetration depth.7

We have presented a single-pixel camera with which non-invasive imaging through scattering media can be achieved. We have obtained results for an absorbing object sandwiched between thin layers of holographic diffusers and between thick layers of chicken breast. We have met our imaging goals without increasing the cost or complexity of our imaging system. In our optical scheme, the image resolution and field of view are controlled by the DMD parameters. The rate of data acquisition can therefore be increased by the application of compressive sensing.8 It may also be possible to perform hyperspectral or polarimetric imaging9 in the presence of scattering media if a proper bucket detector can be selected. As a next step, we are designing experiments for imaging through scattering tissues in reflection configurations that are better suited to biomedical applications.

This work was partly supported by the Ministry of Economy and Competitiveness (MINECO, grant FIS2013-40666-P) and the Generalitat Valenciana (grants PROMETEO2012-021 and ISIC 2012/013). Fernando Soldevila acknowledges a grant from Jaume I University (PREDOC/2013/32).