For more than 2000 years, ray optics (studies of light based on an idealized ray model) has been the basis of optical modeling and design. In recent decades, the introduction of ray tracing software has brought a powerful design technology to optics and photonics applications. However, the limitations of ray optics are now apparent, notably because of the development and availability of advanced light sources, the capability to produce micro- and nanostructures, the need for high numerical aperture systems, and a sharp increase in the variety of applications and related demands on optical functions. To further develop the function of ray tracing, we require a generalization of its connection with diffractive modeling techniques.

For optical modeling we may consider geometric approximations. As an illustration of this, Figure 1 shows the interaction of a ray with a curved interface. If we interpret a ray locally as an electromagnetic plane wave, and the interface as planar, then we can apply (locally) the rules of physical optics, where interaction of an ideal plane wave with an ideal plane interface results in a physical optics model of light and its propagation.1 We have shown that the electromagnetic local plane wave approach follows as the solution of Maxwell's equations in a geometric field approximation.2 A field satisfies this approximation in regions where its evolution in space is dominated by its wavefront. As an example, Figure 2 shows the amplitude distribution of a spherical field along the z-axis. Close to the focus, diffraction effects appear and we must include these in simulations. Further away, the wavefront is dominant. Therefore, we can overlook diffraction effects, and geometric approximations are reasonable. We can observe this behavior in any field. For Gaussian beams with a waist z=0, the geometric approximation is reasonable in regions z>5zR, where zR is the Rayleigh length (the distance from the waist to the point at which the cross section doubles).2 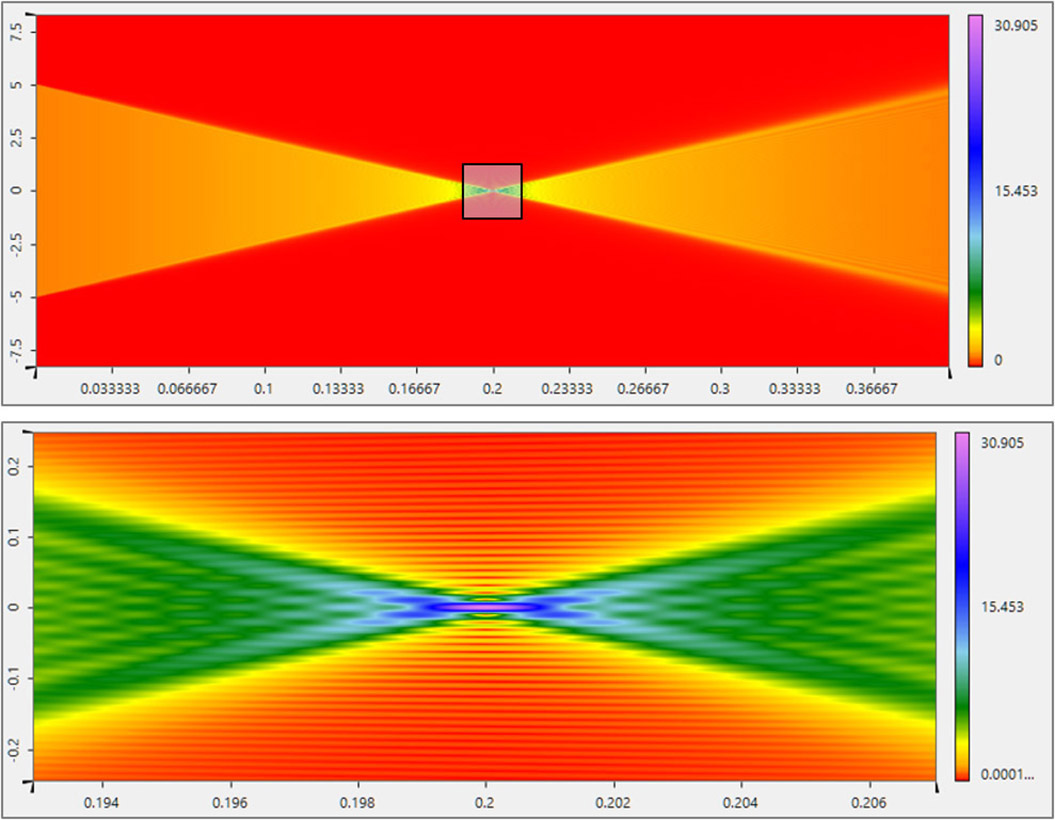 Figure 2. Top: A 1D calculation of the propagation of a truncated spherical wave through its focus. Bottom: The indicated focal region identified in the square in the top picture. The spherical wave has an f-number (ratio of the lens focal length to the diameter of the entrance pupil) of 20.

We refer to optical modeling in its geometric approximation as geometric field tracing, and have implemented it in the form of a smart ray tracing algorithm in VirtualLab Fusion optics software.3 Smart rays ‘ know’ the full electromagnetic field information at their position. Using an appropriate ray index concept (wavefront index), they know and remember their neighbors at the wavefront in the source plane. Consequently, we can use this method with different lateral interpolation techniques for all field quantities allocated to a ray. Smart rays also come with a spatial coherence index, which enables their association with mutually coherent and incoherent modes. This allows us to model partially spatially coherent light. To include color, temporal coherence, and ultrashort pulses, the frequencies allocated to a ray also come with an index that distinguishes frequency contributions from stationary and pulsed light (the frequency index).

Using tracing smart rays, we obtain a solver for Maxwell's equations in the geometric field approximation, which delivers electromagnetic modeling results as quickly as conventional ray tracing delivers (for example) a dot diagram. Where necessary, we can combine this approach with diffractive techniques (see Figure 3).

To demonstrate the validity of the geometric approximation, we may trace smart rays through an interface between two media. Since the rays know their neighbors on the wavefront they represent, it is easy to detect the crossing of rays behind the interface automatically. Crossing rays indicate a destroyed wavefront and therefore the geometric approximation is no longer valid (see Figure 1, middle image). 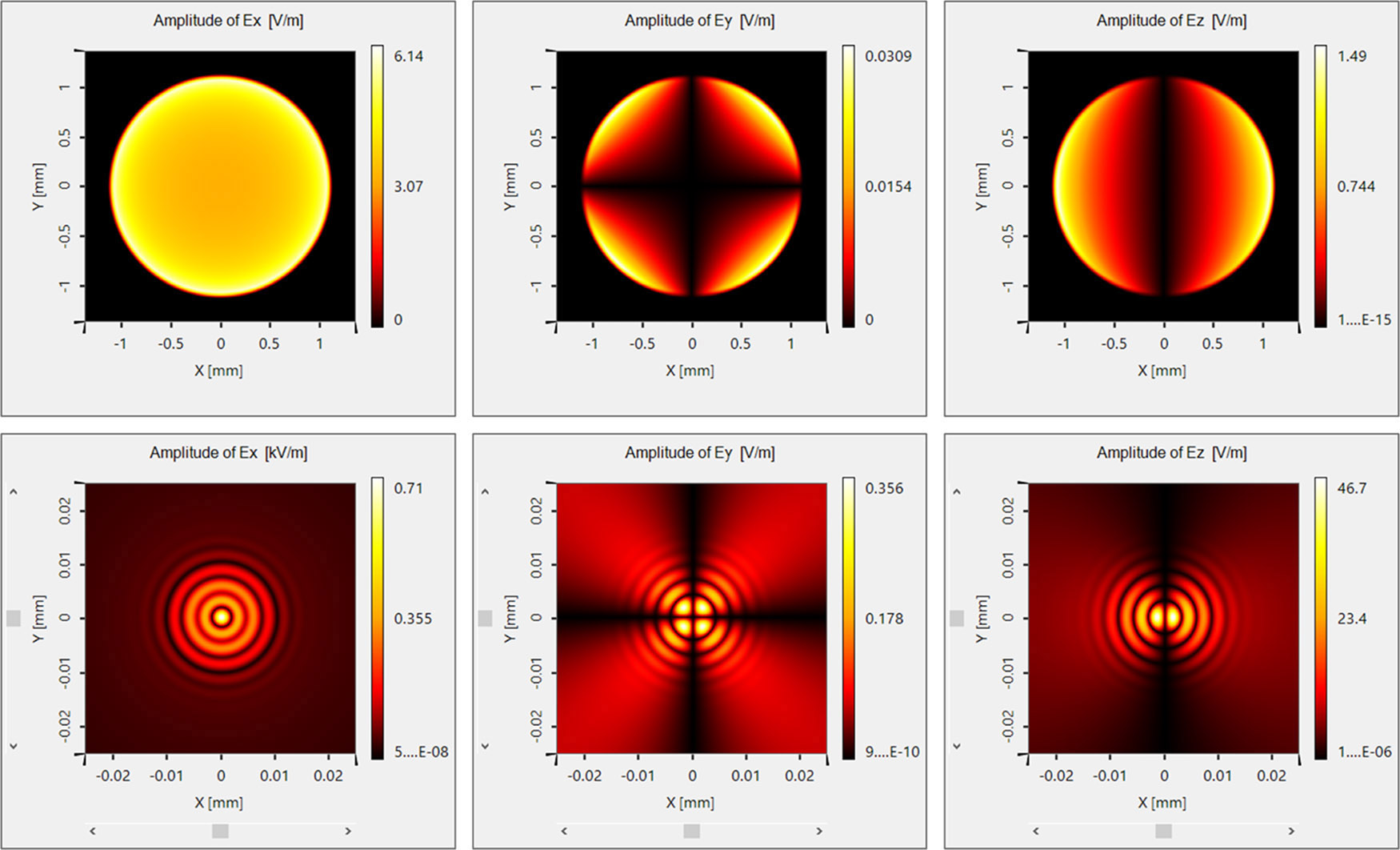 Figure 3. Top row: Electric field components, E=(Ex, Ey, Ez),after the last lens of a system for an x-polarized plane input field. The result includes weak cross-talk from x to y,and a moderate z-component. The result was obtained in about a second by geometric field tracing. The field is then propagated by a diffractive field tracing step into the focus, and the row of images (bottom) is obtained within a few seconds. V/m: Volts per meter.

When the surface is not smooth, but modulated on a small scale—for example, in a lens with scratches or a scattering rough surface—rays inevitably cross. In such situations, the field behind the surface requires a diffractive method for further propagation. In general, diffractive propagation behind a scattering surface can be described through a global plane wave decomposition by Fourier analysis, which yields a propagation integral. Each global plane wave can also be further propagated by geometric field tracing, which provides a physical optics justification and strategy for transferring one incoming ray into numerous outgoing ones. If we assume that the interface is at least locally periodic (see Figure 1, right)—for a grating or a diffractive lens, for example—then the Fourier analysis results in plane waves that propagate only in discrete directions according to the grating equation (the grating orders). This allows us to select those orders of interest for a particular application—the first orders for a diffractive lens, for example.

To model gratings and diffractive lenses by geometric field tracing, smart rays propagate the field to the grating or diffractive lens, where the local grating effect is electromagnetically analyzed (by the Fourier modal method, for example),4 and the resulting diffracted local electromagnetic plane waves are further propagated by smart ray tracing. We have implemented this technique using VirtualLab Fusion, thus enabling the analysis and design of diffractive lenses. It is then possible to export the surface of the diffractive lens by various formats, including Graphic Database System II, for lithographic fabrication. Figure 4 shows an example of a light plate for color mixing with in- and out-coupling gratings. 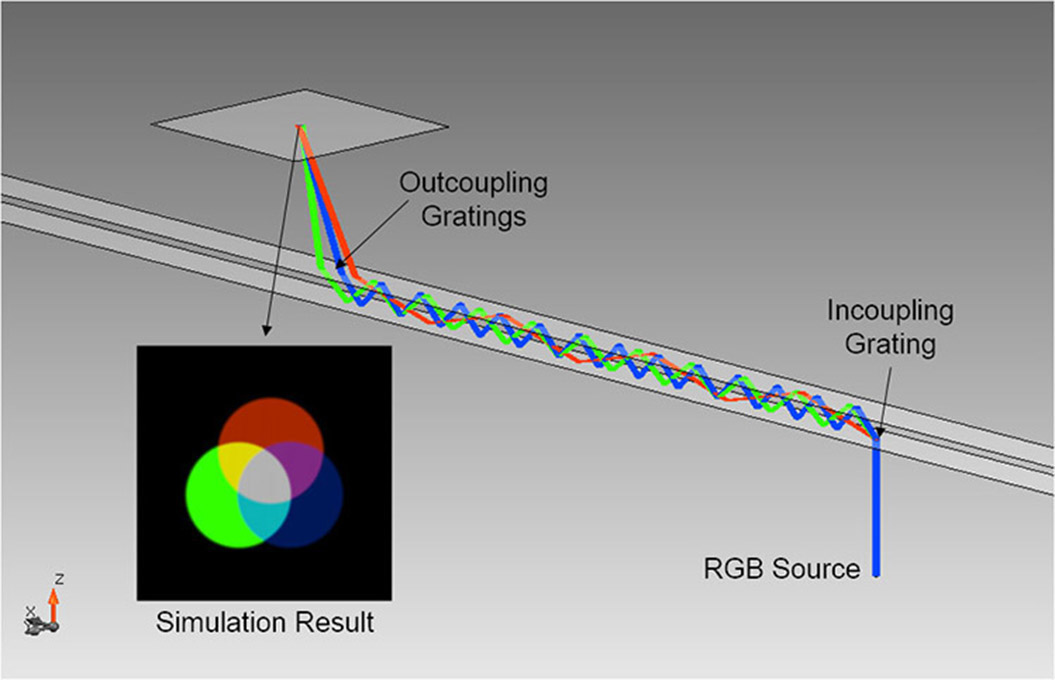 Figure 4. Light from an RGB (red, green, blue) source coupled into a wave plate by a grating, propagated by internal reflection through the plate, and coupled out by three gratings. The result is a partly overlapping mixed color. The modeling is done with geometric field tracing, including a rigorous Fourier modal method modeling of the gratings. The ray tracing propagation is shown together with the geometric field tracing result.

Interference and coherence are phenomena that require physical optics modeling, and thus they are not included in conventional ray tracing. Since geometric field tracing is a physical optics technique, we can use it to obtain and investigate interference and coherence effects. Figure 5 (left) shows the intensity output of a Mach-Zehnder interferometer for a green LED source. The bandwidth of the LED is about 30nm, which leads to a temporal coherence length of about 10μm. Hence, the interference pattern has a varying contrast. Figure 5 (right) depicts a thin-film interference example, where the modeling is done by non-sequential geometric field tracing in the thin-film structure. 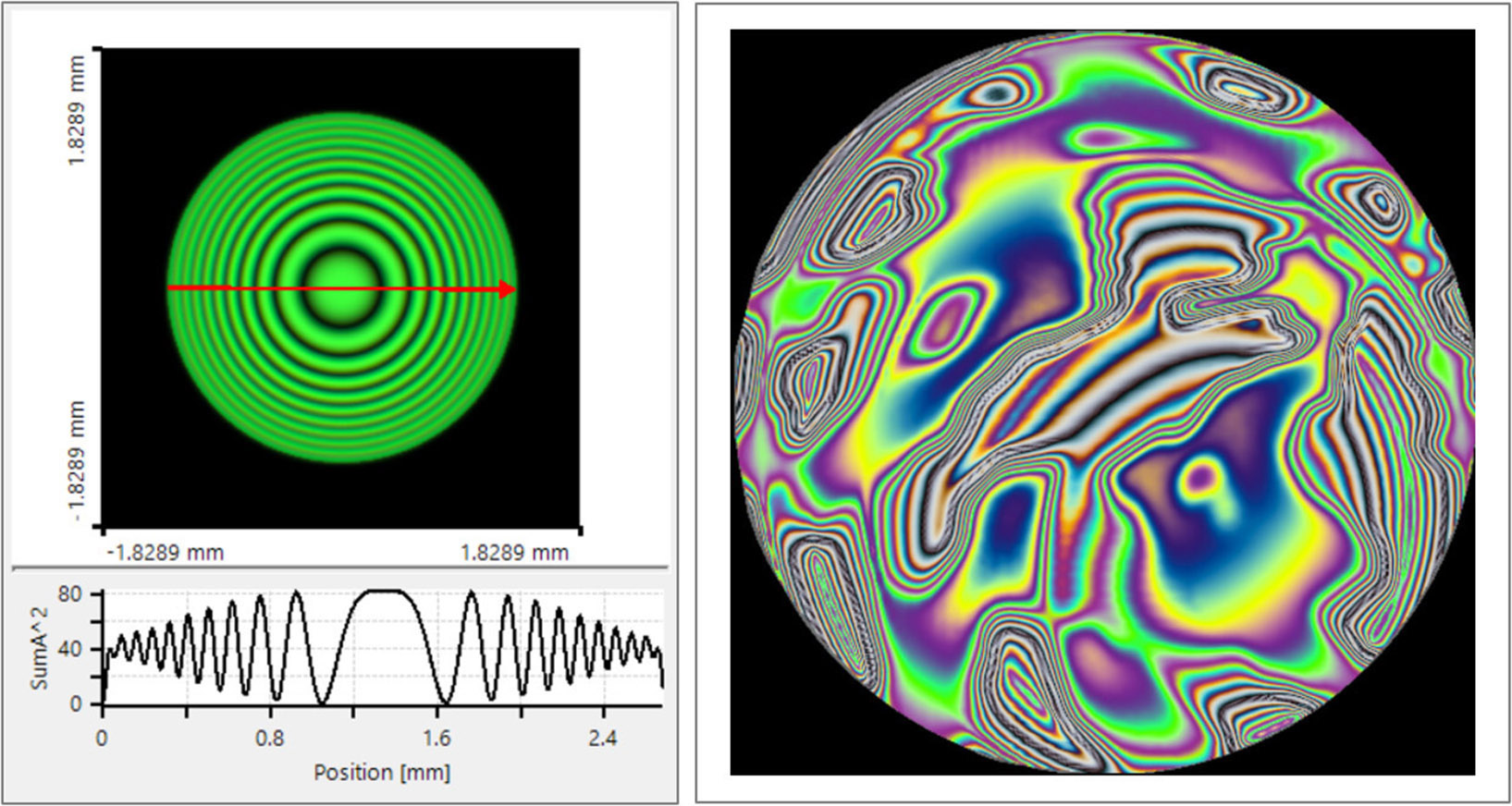 Figure 5. Left: Interference pattern of a Mach-Zehnder interferometer. The modeling was done on a PC with geometric field tracing and more than 100 wavelengths in about a minute. Right: The intensity of the reflected light of a thin film with artificial thickness variation for a white RGB source. The modeling took less than one minute.

We have generalized conventional ray tracing to obtain a physical optics modeling technique in geometric approximation. This approach overcomes most limitations of conventional ray tracing, without requiring more computation time. Furthermore, we can apply geometric field tracing to gradient index optics media and crystals.2 We are now working on algorithms for automatic switching between geometric and diffractive field tracing in system modeling. That also includes the investigation of efficient scattering models as an alternative to the time-consuming conventional Monte Carlo ray tracing approaches.

We would like to thank our colleagues from LightTrans GmbH for supporting and encouraging our work on the development of VirtualLab Fusion.

Frank Wyrowski is professor and head of the Applied Computational Optics Group. In 1999 he co-founded the company LightTrans, and in 2014 Wyrowski Photonics. He is working on various modeling and design tasks, with special emphasis on physical optics.

Christian Hellmann is CEO and is responsible for the development of VirtualLab Fusion. After studying computer science at the University of Cooperative Education in Horb on behalf of Bosch GmbH, he joined LightTrans GmbH. There he worked on the programming and development of algorithms for optical modeling, and was chief product officer from 2013–2014.