Uncountable deaths and injuries to civilians and soldiers are inflicted worldwide by explosive hazards (EHs). Since 2008, EH attacks in Afghanistan have wounded or killed approximately 10,000 US soldiers, and globally these devices cause on average 310 deaths and 833 wounded per month.1 Therefore, new sensors, mathematics, algorithms for signal processing, and techniques to intelligently combine (fuse) all of this information are needed to address the problem. No single sensor is currently able to accurately detect all explosive hazards in different contexts and environments. It is critical that we research and identify sensors that either directly detect hazards and/or help us identify context. We also require advanced features and classifiers to represent and detect explosive hazards within these individual sensors. Ultimately, we need data fusion to combine and reason across these different sensors operating in different parts of the electromagnetic spectrum, to achieve robust detection (a system capable of detecting the majority of targets with relatively few false alarms). 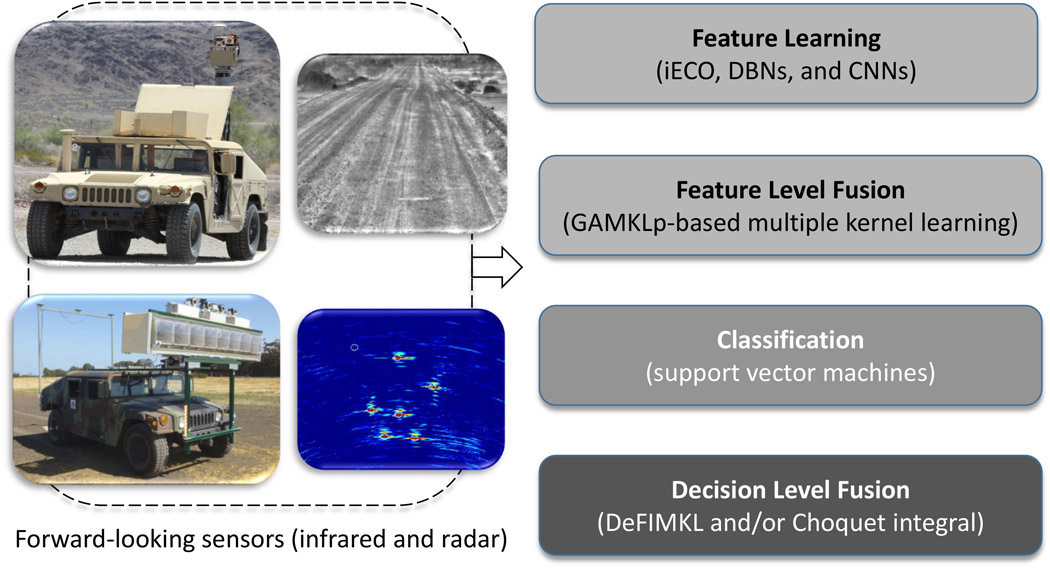 In the last decade, we have witnessed growing interest in feature learning for computer vision.2 The conventional approach is to transform some signal/image region of interest into another representation that better summarizes properties such as color, intensity, contrast, or texture. However, it is often hard, if not intractable, for an expert to determine what features are suitable. Alternatively, we can let the machine learn what is important.

To date, deep learning (using multiple processing layers) has shown state-of-the-art results in feature learning. We recently explored using a deep belief network3 (a neural network using multiple layers of latent variables) and a convolutional neural network,4 where multiple layers of small neuron collections examine small portions of the input image, which are then tiled to overlap and obtain a better representation of the original image. We applied these networks for forward-looking EHD (FLEHD) in IR and GPR, and showed significant improvement in receiver operating characteristic (ROC) curve performance in both IR and GPR.

We also introduced a new EC-based technique for feature learning—improved evolution-constructed5 (iECO) features—which aims to move beyond convolution. iECO is a supervised learning technique that takes a set of heterogeneous signal processing transforms and, using a custom constraint-based EC algorithm, learns from a population of individuals (iECO features) that encode ideal mathematical compositions of transforms and their parameters per a high-level signal descriptor, such as the histogram of ordered gradients. iECO also has the potential to be ‘ reverse-engineered’ since its information is explicit (transforms, their sequence, and their parameters). Using this approach, we showed significant improvement in ROC performance, namely, false alarm reduction, in IR-based FLEHD.5, 6 Although we did not improve the positive detection rate (i.e., detect more targets), we did lessen the number of mistakes that were made (false alarms). This resulted in a more trustworthy system in which the operator spends less time investigating items that are not targets. Ultimately, this means we can perform tasks like route clearance and hazard avoidance faster.

The next hurdle was how best to combine the derived or learned features from one or more sensors. This is no trivial task, since there are multiple stages (or levels) where signal information (data, spectrum, feature, and decision, for example) can be fused. We put forth new state-of-the-art CI mathematics and algorithms to learn the fusion of multiple kernels (matrices in convolution that can hone aspects of the finished image) at both the feature and decision stages, based on genetic algorithms (GAs, or search heuristics) and fuzzy integrals (FIs, parametric functions that can be used to aggregate information in non-linear ways).7, 8 In kernel methods for classification, data is implicitly mapped from a lower to a higher dimensional space—known as the reproducing kernel Hilbert space—to improve classification accuracy. The challenge is that we do not know what transform (kernel) solves the task at hand (we only have an existence theorem). Instead, we take a set of known Mercer kernels and learn a linear convex sum of these kernels (which preserves Mercer's conditions), with the aim of identifying a more powerful and complex function to solve the particular task. Our feature-level fusion method is called ℓp norm-based GA for multiple kernel learning (GAMKLp).7, 8 We also have a quadratic programming-based method called decision level FI MKL (DeFIMKL) that learns a non-linear combination of kernels, and is an aggregation of support vector machine-mapped outputs.7,8 We achieved improvements in classifier accuracy over multiple kernel learning group lasso7, 8 (MKLGL)—the state-of-the-art machine learning technique—in both benchmark data sets and in IR-based FLEHD.6

In summary, we have produced novel CI mathematics and algorithms for feature learning and multi-stage fusion. We have shown the utility of these techniques in FLEHD with respect to IR and GPR. Next, we plan to discover a flexible non-linear feature-level MK fusion and an unsupervised iECO algorithm. We also aim to explore iECO for processing other signal data (beyond IR) and ultimately the combination of our feature- and decision-level theories for simultaneous multi-stage multi-sensor processing.

Derek T. Anderson is an assistant professor in the Electrical and Computer Engineering Department. His research interest is fusion for pattern analysis and automated decision making, with an emphasis on heterogeneous uncertain information. He is a senior member of IEEE, has published 76 articles, and is an associate editor for IEEE Transactions on Fuzzy Systems.

Timothy C. Havens is the William and Gloria Jackson Assistant Professor of Computer Systems in the Departments of Electrical and Computer Engineering and Computer Science. His research interests include data and information fusion, cooperative sensing from mobile platforms, and machine learning in Big Data and heterogeneous data. Prior to his PhD, he was an associate technical staff member at the Massachusetts Institute of Technology Lincoln Laboratory, where he specialized in directed energy, GPS, and airborne radar. He is an associate editor of IEEE Transactions on Fuzzy Systems.

Anthony J. Pinar is a PhD candidate in the Department of Electrical and Computer Engineering. His research interests include machine learning, image processing, computational intelligence, and autonomous underwater robots.