A new generation of hurricane-observing satellites

NASA's Cyclone Global Navigation Satellite System (CYGNSS) mission is a constellation of eight microsatellites that will launch in 2016 to improve hurricane forecasting. The system will make frequent measurements of ocean surface winds in and near the eyewall of tropical cyclones, typhoons, and hurricanes throughout their life cycles.

Hurricane intensity forecasts are critical for areas affected by tropical cyclones. Current weather satellites are unable to measure surface winds near the center of a hurricane, because their signals are severely attenuated by the heavy rain. This is an obstacle in intensity forecasting, since the cores of storms are rapidly changing and play major roles in the genesis and intensification of hurricanes. The forecasts are further limited by the inadequate sampling capabilities of conventional polar-orbiting satellites. Due in part to these issues, hurricane intensity forecasts have seen only marginal improvement in accuracy since 1990, while hurricane track forecasts have improved in accuracy by about 50% in that same period.1

Until now, hurricane observations have relied on scatterometry to measure wind speed over the oceans from space. A radar instrument aboard a satellite transmits a signal to the ground, and measures the signal strength scattered back to it. But since these signals cannot travel well through heavy rain, the accuracy of wind speed estimates in the core of the hurricane is often highly compromised. A further issue with other satellites is that they are placed in polar low-Earth orbits that are optimized for global coverage at the expense of limited temporal sampling in the tropics. The revisit times of current on-orbit instruments range between 12 hours and several days, and are not sufficient to capture the rapidly changing environment at the core of a tropical cyclone. 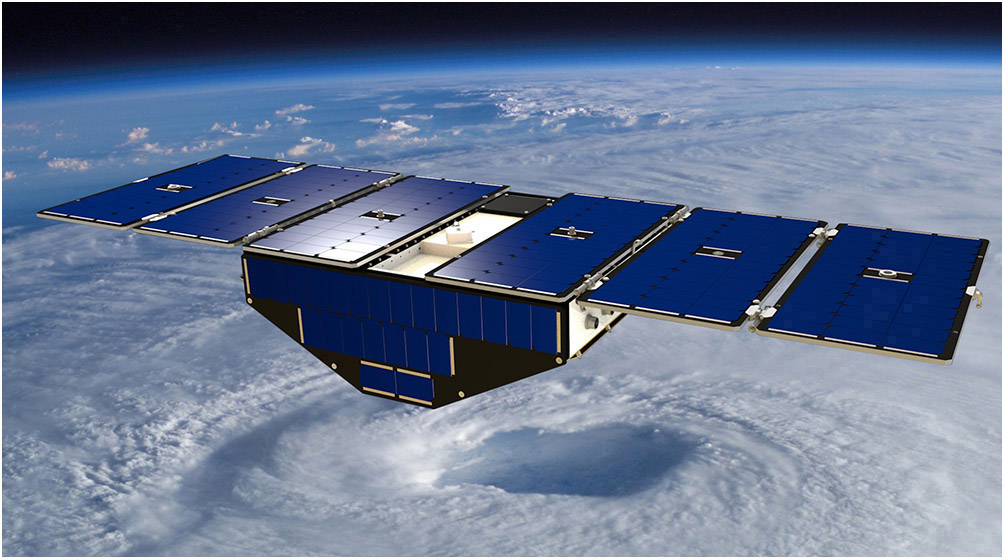 Figure 1. Artist's concept of one of the eight Cyclone Global Navigation Satellite System satellites deployed in space above a hurricane. (Photo courtesy of Southwest Research Institute.)

CYGNSS is taking a novel approach to measuring wind speeds. Previous instruments needed both transmitting and receiving capabilities when using conventional scatterometry to measure wind speed. The CYGNSS satellites will only receive signals scattered from the surface that are transmitted by global positioning system (GPS) satellites already orbiting the Earth. The use of eight satellites will increase the spatial coverage as well as the temporal sampling throughout the tropics. The instruments will be dispersed uniformly around a common orbit plane, with successive satellites passing over the same region every 12 minutes. As the CYGNSS and GPS constellations orbit around the earth, the interaction of the two systems will result in a new image of wind speed over the entire tropics every few hours, compared with every few days for a single satellite.2

The assembly of the first CYGNSS microsatellite began on 14 August 2015. The body of each satellite measures roughly 20×25×11in, slightly larger than a standard carry-on suitcase. When fully assembled, the satellites will each weigh about 64lbs. With its solar panels deployed, each microsatellite will have a wingspan of 5.5ft.

Each microsatellite platform hosts four GPS receivers modified to measure surface-reflected signals. Similar GPS-based instruments have been demonstrated on both airborne and spaceborne platforms to retrieve wind speeds as high as 130mph (a Category 4 hurricane) and through all levels of precipitation, including the intense levels experienced in a tropical cyclone eyewall.3 The microsatellite and GPS receivers together are referred to as a CYGNSS observatory. Each observatory simultaneously tracks scattered signals from up to four independent transmitters in the operational GPS network. The number of observatories and the orbit inclination are chosen to optimize tropical cyclone sampling properties. The result is a dense cross-hatch of sample points on the ground that cover the critical latitude band between ±35° latitude.

Each CYGNSS observatory will be equipped with a delay doppler mapping instrument (DDMI). The DDMI will generate DDMs continuously at a low data rate, which will allow evaluation of ocean surface wind speeds based on how rough the ocean is (rougher oceans under high winds will yield a different scattered signal than smooth oceans under calm winds).4,5 In special situations, such as when passing over an active tropical cyclone, the instrument can be operated in raw data mode, where 60 seconds of raw sampled data is accumulated. This allows researchers to fully analyze and re-analyze the acquired data using different processing schemes to ensure that the nominal DDM mode of operation is not losing important geophysical information.

The University of Michigan is directing the CYGNSS mission for NASA, including satellite design and production and science data processing. The Southwest Research Institute in San Antonio is also designing, building, and testing the CYGNSS microsatellites, and will host the mission operations center at its Boulder, Colorado, location.

In summary, CYGNSS will improve hurricane observations by combining the all-weather performance of GPS signals with the sampling properties of a constellation of satellites. Our future work will focus on the mission's launch, which is scheduled for late 2016 on an Orbital ATK Pegasus XL expendable rocket from Cape Canaveral in Florida, with science operations beginning prior to the 2017 Atlantic hurricane season.

Chris Ruf is principal investigator for the CYGNSS mission. He is also a professor of electrical engineering and climate and space sciences and engineering. From 2006 to 2015 he directed the Space Physics Research Laboratory.