Enhancing the efficiency of white LEDs via reflection

LEDs have become increasingly important in recent years because of the advantages they have over traditional lighting methods (e.g., faster response times, smaller size, longer lifetimes, and higher luminous efficiency).1–4 To date, a number of approaches have been taken with the aim of enhancing the luminous efficiency of these devices. Such methods include the use of patterned substrates, patterned polydimethylsiloxane, air voids, and the incorporation of scattering particles as dopants.3, 5–8 To determine the characteristics of white LEDs, many crucial factors—such as the luminous efficiency, color rendering index, and correlated color temperature (CCT)—must be considered. Color uniformity represents another important parameter in the fabrication of white LEDs. LEDs with a remote structure (i.e., those in which the phosphor is placed at a distance from the LED chip) have excellent luminous efficiency because the probability of blue-photon absorption is increased. However, these devices exhibit worse color uniformity than typical devices (i.e., dispensing and conformal LEDs). This is because of the elevated location of the phosphor layer, which causes the angular dependence of the emitted blue and yellow photons to be very different and gives rise to a phenomenon called ‘yellow ring.’

In the yellow ring phenomenon, a band of yellow is visible around the circumference of the emitted light. Many investigations are currently underway to try and find a way to overcome this issue.9–14 Distributed Bragg reflectors (DBRs)—1D photonic crystal structures composed of alternating dielectric layers with different refractive indices that enable high reflectivity15—show promise for overcoming this issue in remote-phosphor LEDs. Furthermore, the design of DBRs is versatile and, by changing the thickness of dielectric layers, a suitable stop-band (i.e., range of reflected wavelengths) can be achieved.16

We have thus developed a DBR structure comprised of alternating hafnium oxide/silicon dioxide (HfO2/SiO2) layers.17 This structure optimizes reflectivity and angular CCT uniformity when it is used in a remote-phosphor (yttrium aluminum garnet) white LED. A cross-sectional illustration of the remote-phosphor package, covered with our DBR structure is shown in Figure 1(a). The reflectivity spectra for the three different HfO2/SiO2 DBR films that we developed (with 2.5, 3.5, and 5.5 pairs) for different wavelength ranges are shown in Figure 1(b). The refractive indices of the materials (1.96 for HfO2 and 1.55 for SiO2) and the film thicknesses (57.4 and 72.58nm for HfO2 and SiO2, respectively) enable the design of a quarter-wavelength mirror stack. 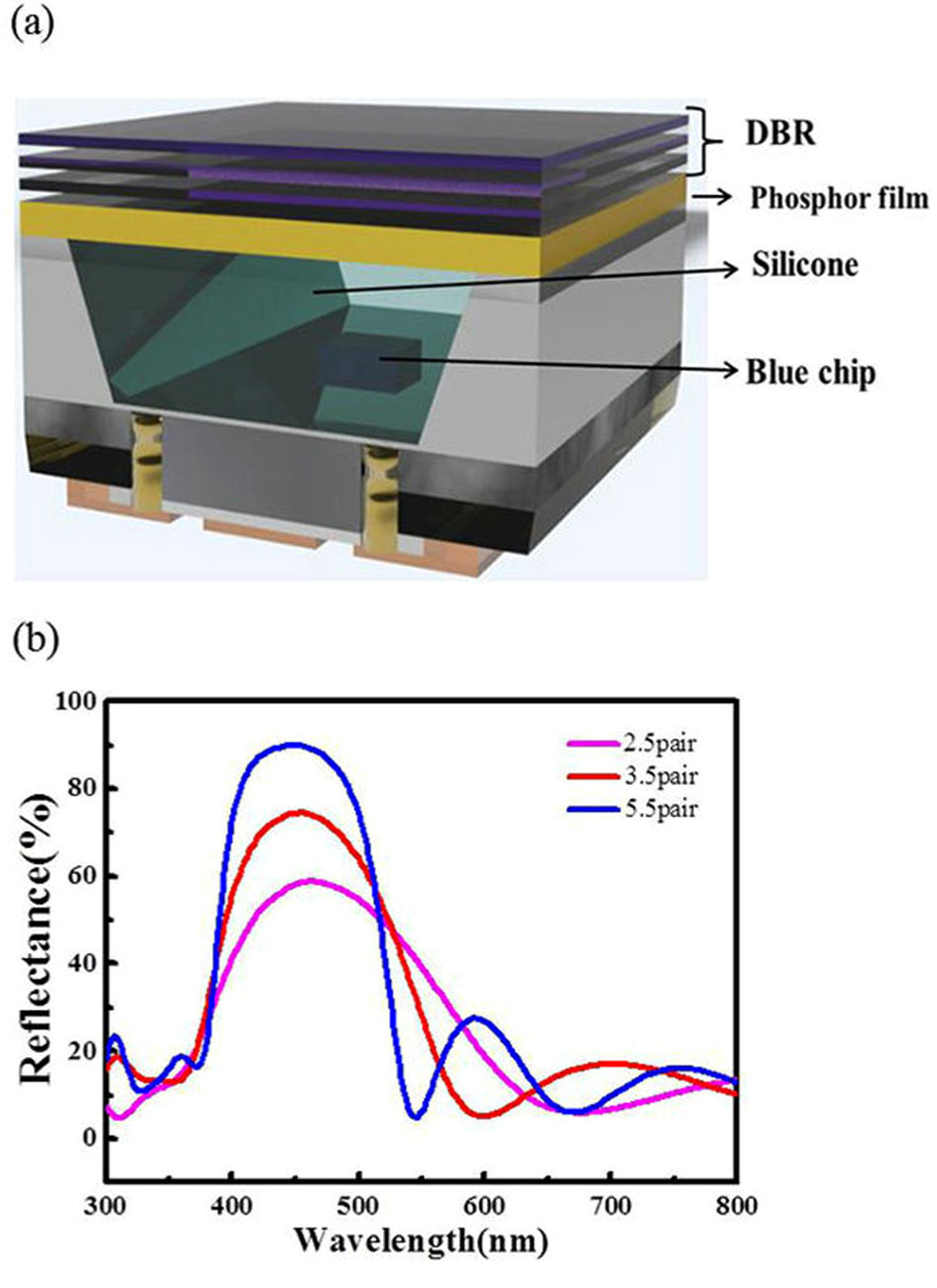 Measurements of the emission spectra—see Figure 2(a)—show that blue light is suppressed and yellow light is enhanced in the DBR-covered LED packages. We also found that the current-dependent luminous flux is enhanced—see Figure 2(b)—because the DBR layer reflects unabsorbed blue photons back into the phosphor layer, which enables more efficient use of blue light. The probability of yellow-photon generation is thereby enhanced and, as the human eye is more sensitive to yellow photons, there is an effective increase to the luminous flux. Devices in which more than 3.5-pair DBRs are implemented can be used to achieve an increase in light output of more than 10%. 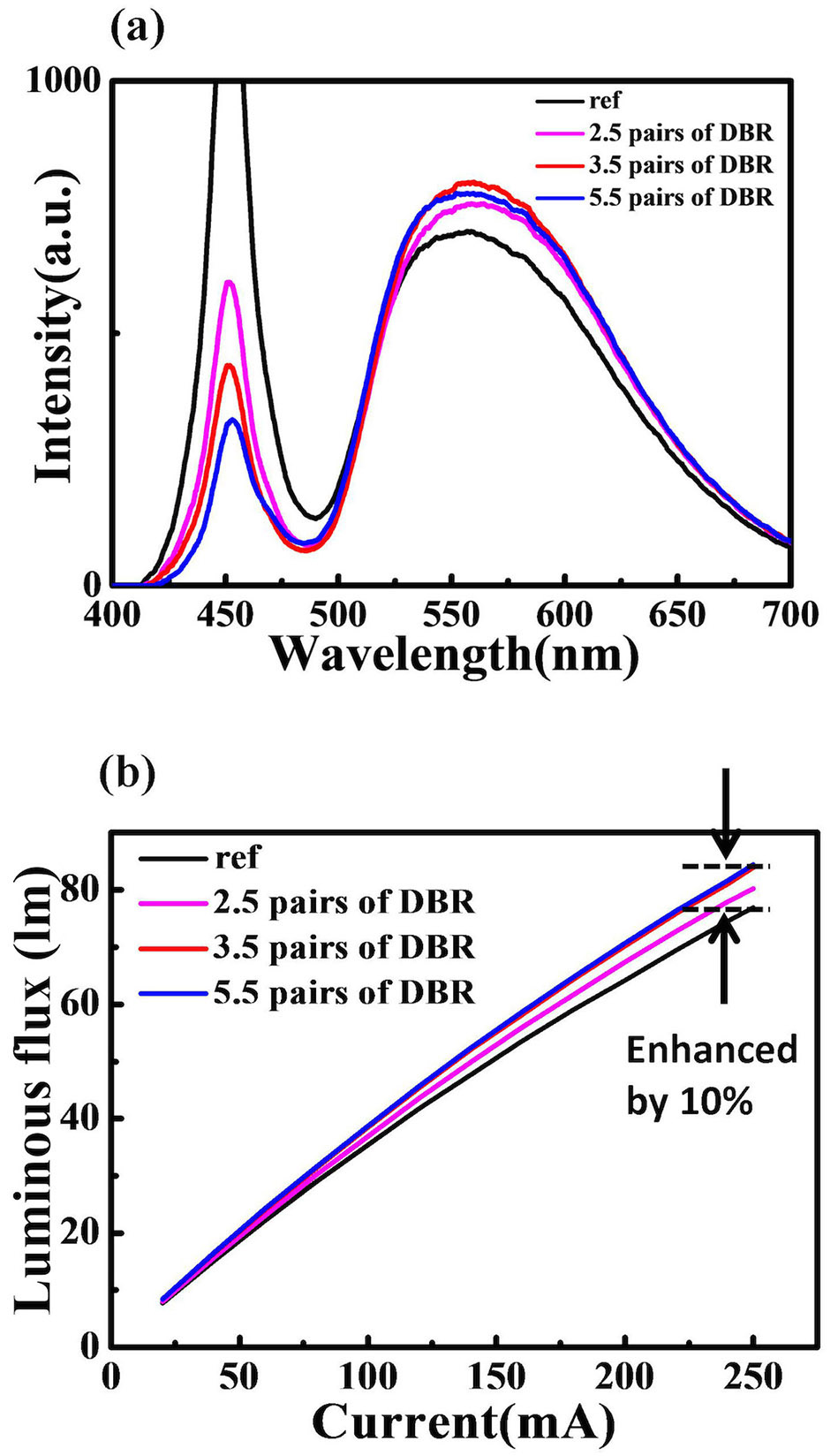 The measured angular reflectivity of our DBR structures from 20 to 60°, at a range of incident wavelengths, is illustrated in Figure 3. The 3.5- and 5.5-pair DBR structures have a very high reflectance at around 450nm, and a much lower yellow reflection. This difference leads to a significant reduction of blue rays in the normal direction, and therefore to a reduced CCT at the center. In the case of the 2.5-pair DBR sample, the ratio of reflectivity between blue and yellow photons is much smaller in all directions, which results in a relatively flat CCT pattern.

The diagram in Figure 4(a) shows the angular distribution of the CCT exhibited by the remote-phosphor LED with and without DBR layers. The CCT deviations for the conventional device (i.e., without a DBR coating) and those with 2.5-, 3.5-, and 5.5-pair DBR films were 1735, 140, 954, and 680K, respectively. The conventional device has the largest CCT deviation (ΔCCT), causing the yellow ring phenomenon shown in Figure 4(b). The ΔCCT is reduced by the DBR structure—see Figure 4(c)—which significantly negates this phenomenon. By increasing the DBR layer to 5.5 pairs, however, the inverse phenomenon (‘blue ring’) occurs, as shown in Figure 4(d). This indicates that although the use of DBR films enables the scattering of the normal blue ray and modification of the unfavorable Lambertian pattern, there is a threshold above which ΔCCT increases. This occurs when too many blue photons are reflected at the center and the percentage of yellow photons increases, eventually causing a yellowing of the light at the center. We observed this behavior in the 3.5- and 5.5-pair devices. Optimal results were obtained using the 2.5-pair DBR coating. 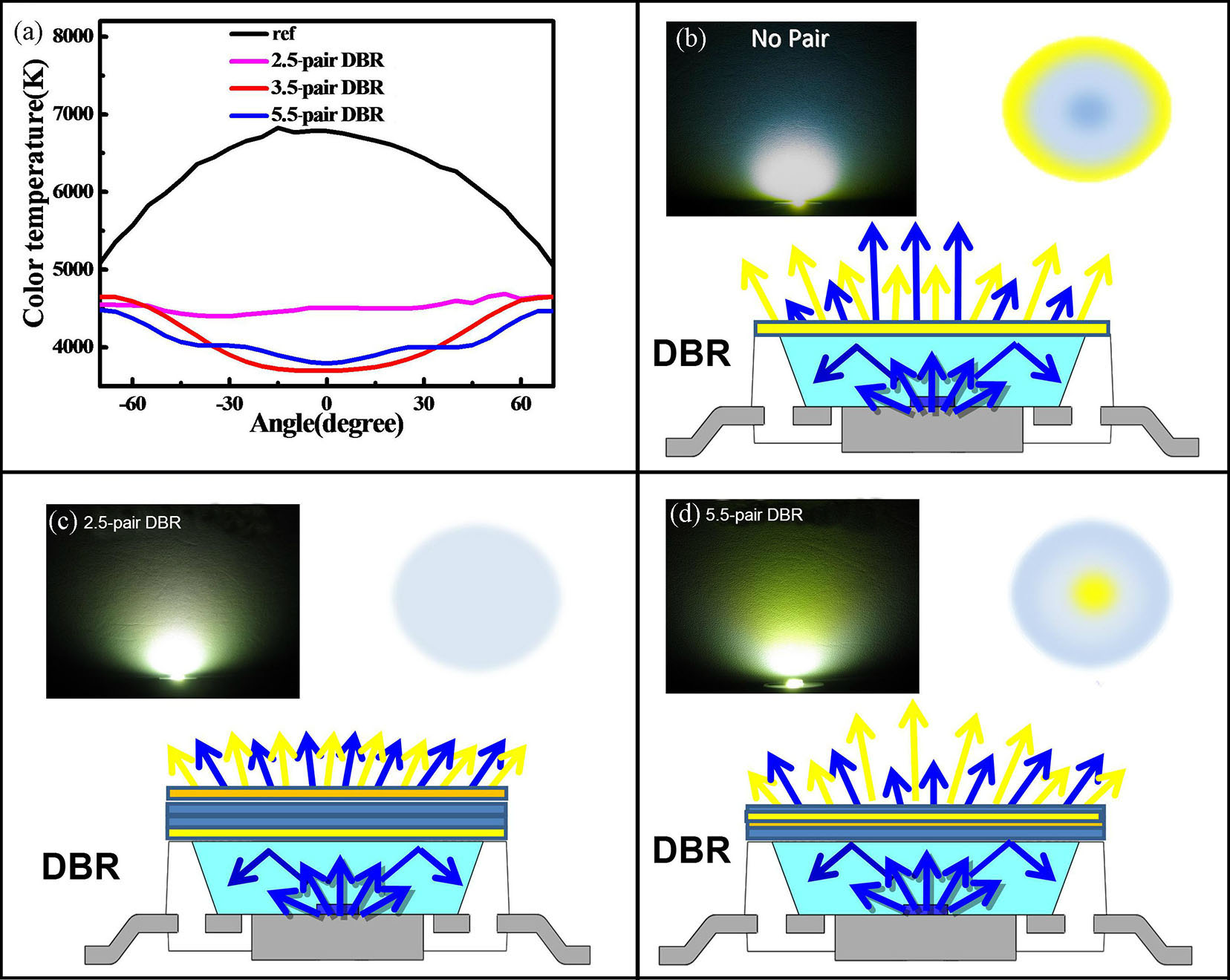 Figure 4. (a) The spectrum of angular-dependent correlated color temperature at 0.12A with 2.5, 3.5-, and 5.5-pair DBRs. Far-field images of the emissions of the remote-phosphor LED package and illustrations of the reflectance behavior for the case of (b) no DBR film, (c) a 2.5-pair DBR, and (d) a 5.5-pair DBR are shown.

In summary, we have fabricated a white remote-phosphor LED with excellent characteristics by using a DBR coating. The DBR coating causes Lambertian blue rays to be reflected, resulting in the re-excitation of the phosphor and a subsequent 10% enhancement of the luminous flux. We believe that the incorporation of DBR structures within regular white-LED packages could improve the performance of these devices and should therefore be considered for application in next-generation packaging of solid-state lighting. We intend to continue working towards a design that can fully optimize the light-output CCT and intensity of these devices. Although DBR structures represent the most popular approach to functional film design, we would also like to investigate other more elaborate band-pass filters and omnidirectional reflectors. In addition, we hope to reduce the total thickness of the packages to make them more attractive for commercial applications

Chien-Chung Lin is an associate professor. His current research focuses on the design, modeling, and fabrication of novel optoelectronic devices.

Huang-Yu Lin is currently a PhD candidate. His work is focused on UV-excitable phosphates with good color quality and high luminous efficiency for application in displays.

Kuo-Ju Chen is currently a PhD candidate and his study focuses on high-power LEDs, including their fabrication, simulation, and characterization.

Sheng-Wen Wang is currently a PhD candidate in the Department of Materials Science and Engineering. His study focuses on nanostructures and photonic crystals, as well as on GaN-based LEDs with high external quantum efficiency for application in solid-state lighting.