Estimating the 3D fold structure of the crust–mantle boundary

Unlike the folds of rocks, which are exposed at the Earth's surface, the folded structures of the crust and lithosphere are hidden deep within the planet's interior. Geophysical and geodetic methodologies are therefore required to estimate the invisible subsurface structures. For example, seismic explorations can be used to obtain information on subsurface folds, faults, strata, and basements. These are useful for studying geologic history and tectonic environments, for geo-hazard mitigation, and for the exploration of natural resources. This pursuit, however, is not simple when the structures of interest are deep within the Earth's interior and when they are mixed with structures that have other origins.

In the past, geophysicists have predicted that lithospheric buckling can occur in areas that are under huge levels of horizontal compression. Spectral analysis approaches have been used to estimate the prevailing wavelengths in areas such as central Asia1 and the Tibetan Plateau.2, 3 The spectral analysis of topography and gravity can be used to estimate the depth and wavelengths of geophysical structures, which enables the design of filters to more clearly characterize the signals. This technique is widely used in gravity field inversion calculations (e.g., for the area over the Tibetan Plateau).4 With this process, however, the subsurface structure is not directly revealed. Instead, this approach works as a preprocessor and can be used to provide information for the design of optimal inversion parameters. The technique can only provide limited estimates for the prevailing wavelengths of subsurface folds for two reasons. First, the gravity signal includes the total waves, i.e., those from subsurface folds under horizontal compression as well as those from the isostatic response of vertical loading. Second, the correlation can be directly affected by erosion of topography and other subsurface mass movements of material.

In our work, we have recently estimated the 3D fold structure of the deeply seated crust–mantle boundary (Moho) beneath the Tibetan Plateau.5, 6 With our methodology, we can provide improved detection of the Moho's folds by estimating the 3D structure. We also use geodetic and geophysical approaches to validate our model. Our primary data comes from two state-of-the-art gravity missions, i.e., the NASA/German Aerospace Center Gravity Recovery and Climate Experiment (GRACE) and the European Space Agency Gravity Field and Steady-State Ocean Circulation Explorer (GOCE). Our results so far reveal that the Moho did not form randomly. Rather, it displays semi-regular patterns that are similar to those of folded mountain ranges. Detailed descriptions of our methodology and our results are available elsewhere.4–7

We based our approach on the combination of the traditional geophysical inversion method and the analysis of isostatic compensation. As illustrated in Figure 1, an elastic plate can be folded, through horizontal compression, when the compression is sufficiently large (i.e., greater than a critical value). We are able to calculate the direction, stress, and strain that are associated with the plate movements from Global Navigation Satellite System (GNSS) data. In addition, we estimate subsurface structures using a geophysical inversion calculation. The Earth's crust, however, is neither flat nor uniform. It is thus subject to ongoing vertical loadings from sources that include irregular terrain (upper), Moho undulation (lower), and other anomalous density distributions. All of these mechanisms cause isostatic compensation at the Tibetan Plateau, which is the highest (average altitude of more than 4800m) and most tectonically active (its crust is twice as thick as normal continental crust) region on Earth. The subsurface structure of the Tibetan Plateau has been modeled previously in several studies, with the use of various geophysical approaches.8–11 By considering the two major geophysical processes occurring in this region (i.e., horizontal compression and vertical loading), however, we can obtain an improved Tibetan Plateau 3D Moho fold model.

Figure 1. A schematic illustration of subsurface folding that can occur in the Earth's lithosphere or Moho (crust–mantle boundary) when the level of horizontal compression (P) is sufficient. The direction, stress, and strain associated with the movement of the tectonic plates can be calculated from Global Navigation Satellite System data.

We have used gravity inversion to compute the topography of the Moho beneath the Tibetan Plateau (see Figure 2). As this topography is created from the combined effect of folding (caused by horizontal compression) and isostatic compensation (caused by vertical loading), we are able to separate the fold components by eliminating the isostatic components. For our isostatic analysis, we prefer to use a flexural model in which we consider the rigidity of the lithosphere (rather than the Airy model, which is somewhat unrealistic as it assumes zero rigidity). Our estimated 3D Moho fold model shows good agreement with the crustal velocities estimated from the GNSS data (indicated by the black arrows in Figure 2). Our 3D fold model is also perpendicular to the east–west (whole Tibet) and north–south (east Tibet) directionality of the fold. We calculate a fold wavelength of about 360–400km. This value corresponds to the predicted wavelengths of an elastic plate (with an effective elastic thickness of about 35–40km) that is under horizontal compression.6 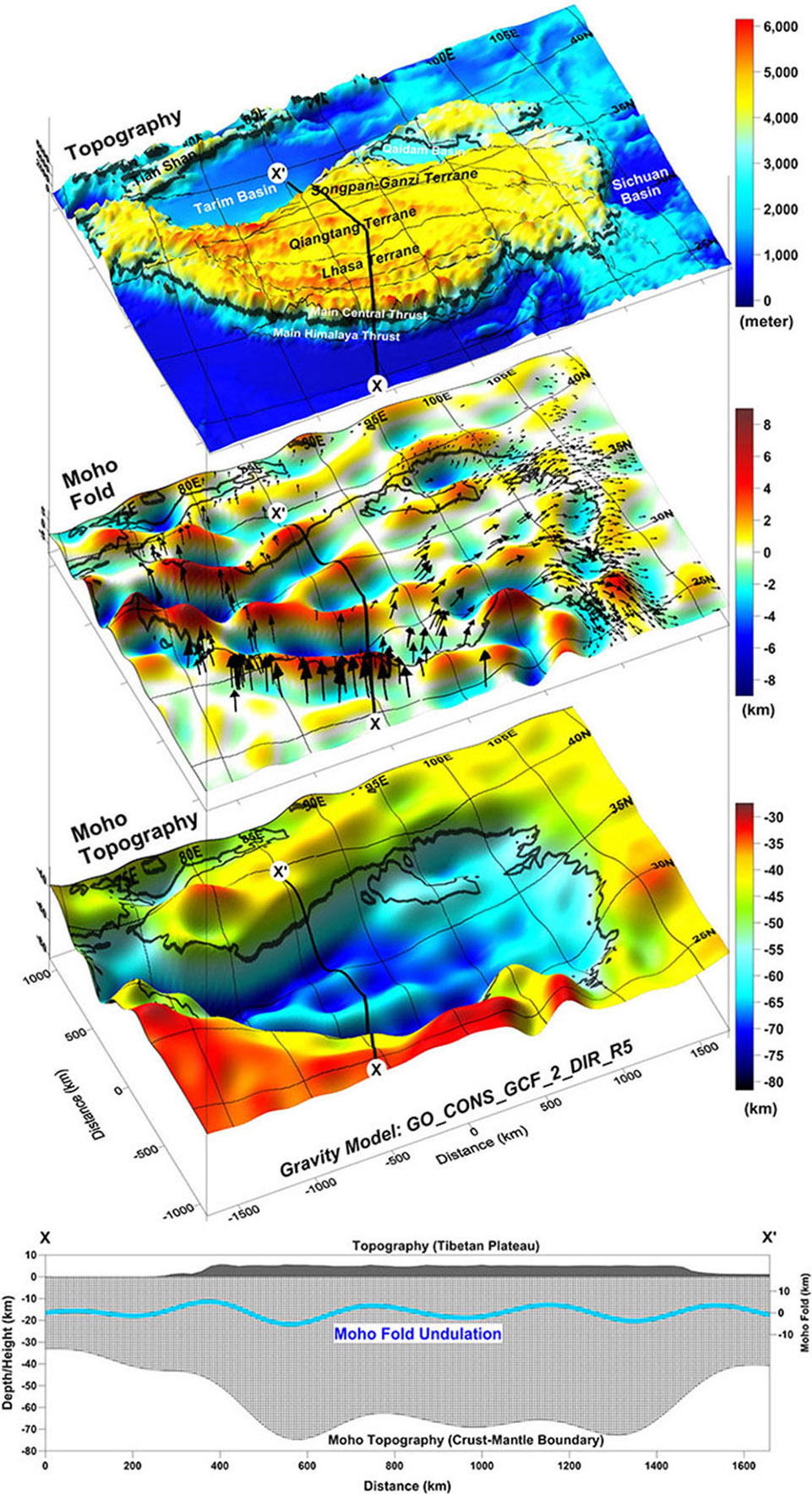 The Earth is continuously subject to complex geophysical processes that interact with each of the planet's components, i.e., the biosphere, atmosphere, cryosphere, hydrosphere, and the solid Earth (from the crust to inner core). Understanding the origin and causes of the Moho structure is therefore not an isolated problem. The study of the Moho also provides improved understanding of tectonic motions and crustal deformation, near-surface structural geological events, accumulation and release of stress and strain, earthquake and geodynamic modeling, geothermal modeling, and climate change. Tectonic movement, especially along plate boundaries, causes various kinds of geological processes (e.g., earthquakes, volcanism, folding, faulting, and rifting). Our structural model reveals that the Tibetan Plateau results from continental collision and inversely influences tectonic activity in the area. As such, we can use our approach to study other dominant geophysical processes that are occurring in the region. We have also been able to provide an example of lithospheric folding affecting the generation of basaltic magma in some geophysical conditions.12

We have estimated the 3D fold structure of the crust–mantle boundary (Moho) beneath the Tibetan Plateau through the combined use of a geophysical inversion method and isostatic compensation analysis. We use geodetic and geophysical approaches to validate the model, as well as data from two state-of-the-art gravity missions. Our advanced 3D crust model also indicates that the Tibetan Plateau has particular features that have formed as a result of continental collision. These results are in addition to the most important findings from previous studies, i.e., that revealed the subducting lithospheric slab and the existence of the partially molten middle crust.8–10 In our future work we will improve the spatial resolution of our structural model for the upper crust. We also aim to include additional geodynamic processes (e.g., mass flow, uplift, subsidence, basin formation, and earthquakes) in our model.

We acknowledge support from the Korea Institute of Geoscience and Mineral Resources (Basic Research Projects 15-3213 and 15-3214), the State Key Laboratory of Geodesy and Earth's Dynamics of the Institute of Geodesy and Geophysics, Chinese Academy of Sciences (grant Y309473047), the NASA Concepts in Advanced Geodesy Program (NNX12AK28G), and a European Space Agency contract (ESRIN 4000109032/13/I-AM) in the framework of the GOCE User ToolBox project.