Luminescent solar concentrators (LSCs) were first proposed more than 30 years ago as cost-effective light collectors to supplement silicon (Si)-based photovoltaic (PV) solar cells. They consist of a semitransparent glass or plastic waveguide doped or coated with highly emissive chromophores, which upon absorption of sunlight re-emit photons at longer wavelengths. Total internal reflection guides the luminescence to the waveguide edges, where it is converted into electricity by PV cells installed along the slab perimeter (see inset, Figure 1). Thanks to the ease with which they can be integrated into architecture—for example, in solar windows—LSCs are considered one of the most promising strategies for the realization of buildings with net-zero energy consumption. They are especially attractive for application in highly populated urban environments, where rooftop areas are insufficient to meet a building's energy requirements through conventional Si-PVs. However, the integration of LSCs into real-world applications has so far been hindered by the intrinsic limitations of the organic molecules and conventional quantum dots (QDs) commonly used as emitters. In particular, large reabsorption losses and a limited coverage of the solar spectrum have prevented the realization of large-area devices with sufficiently high efficiency. Furthermore, commonly used chromophores make the LSCs strongly colored, which imposes aesthetic constraints on their application in architecture. 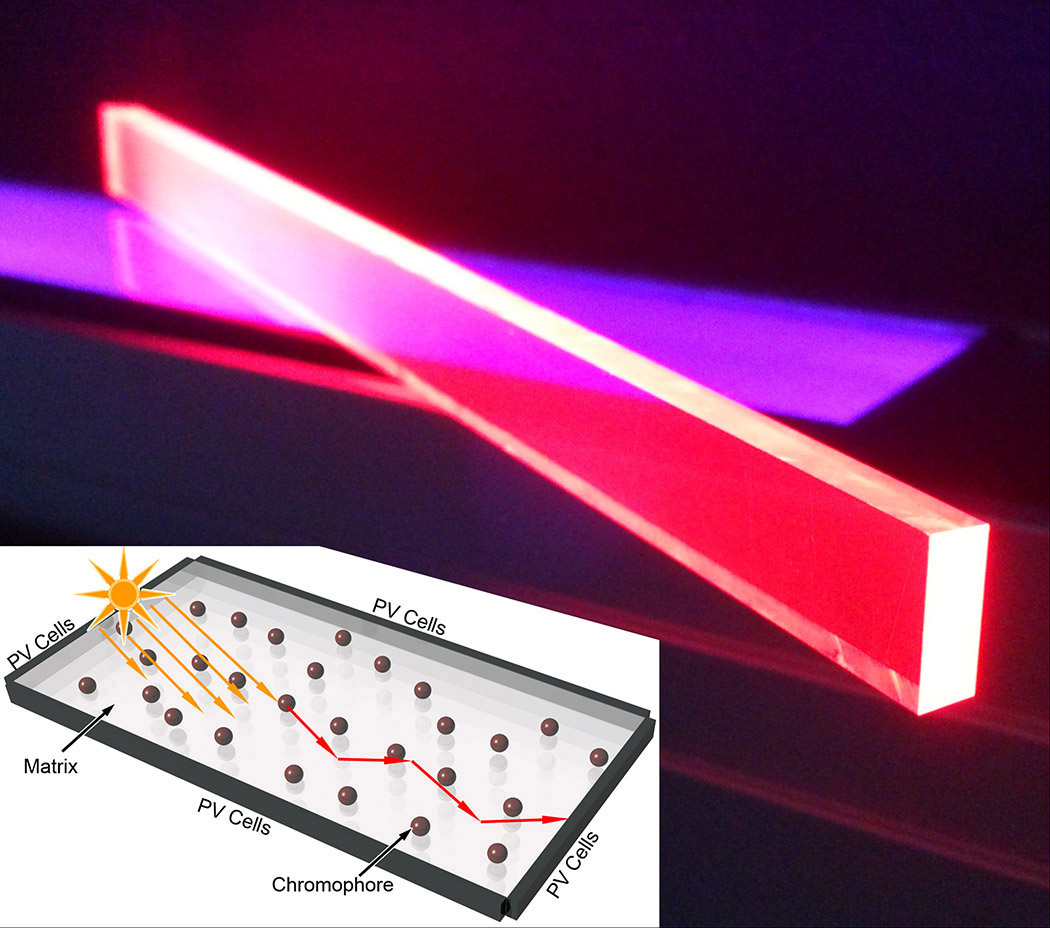 Figure 1. Photograph of a polymethylmethacrylate luminescent solar concentrator (LSC) made of cadmium selenide /cadmium sulfide quantum dots (QDs) under UV illumination on the back end. Inset: A schematic of an LSC composed of highly emissive choromophores in a plastic slab coupled to photovoltaic (PV) cells at the slab edges.

In our first approach to suppressing the reabsorption losses in LSCs, we used wavefunction-engineered QDs as active chromophores.1 We designed hetero-QDs, in which two distinct parts of the nanostructure serve independently as light-harvesting antenna and low-energy emitter, respectively, thereby enabling us to tune the spectral separation between the absorption and emission spectra (the Stokes shift). We realized this strategy using core/shell cadmium selenide (CdSe)/cadmium sulfide (CdS) QDs in which the shell (which is 4–5nm thick) is responsible for the optical absorption, and the small core (with radius 1.5nm) for light emission. We obtained robust and high optical quality QD–polymer nanocomposites by incorporating these QDs into polymethylmethacrylate. As a result of the large Stokes shift (>100nm or 0.5eV), the emitted light propagated within the matrix over long distances, without experiencing any reabsorption (see Figure 1). Moreover, the mild polymerization procedure derived from a modified version of the industrial cell-casting protocol, coupled with the protective role of the thick shell, prevented any degradation of the QD emission upon incorporation into the matrix. Using this method, we realized LSC prototypes tens of centimeters in size and with an impressive optical conversion efficiency (>10%) of the UV/blue portion of the solar spectrum.

We have also further improved spectral coverage and color neutrality in the LSC technology (and reduced its toxicity) using QDs of ternary I–III–VI2 semiconductors such as CuInSexS2−x.2 Here, the large Stokes shift results from the involvement of an intra-gap hole state in the emission process. By making a proper selection of the QD size and composition, we were able to extend the absorption spectrum to the near-IR, which allowed for improved harvesting of the solar spectrum by comparison with organic dyes or II–VI QDs. We incorporated CuInSexS2−x protected with a thin zinc sulfide shell into photopolymerized poly(lauryl methacrylate) slabs to produce 150cm2 square LSCs (see Figure 2). Despite an average transparency of 80% across the visible spectrum, these devices provided an unmatched optical power conversion efficiency as high as 3.2% under air mass (AM) 1.5 global illumination. Importantly, we demonstrated that the main factor limiting the overall device efficiency was scattering of the guided light at matrix imperfections, not optical reabsorption by the QDs. This finding indicates that we might improve the device efficiency further by using industrial production processes that result in plastic slabs of higher optical quality. To access the potential of our LSCs for the realization of large-area PV windows, we performed Monte Carlo ray tracing simulations. This modeling suggests that—with perfectly emitting QDs (photoluminescence quantum yield of 100%)—the LSC performance does not severely degrade for dimensions as large as 1m. 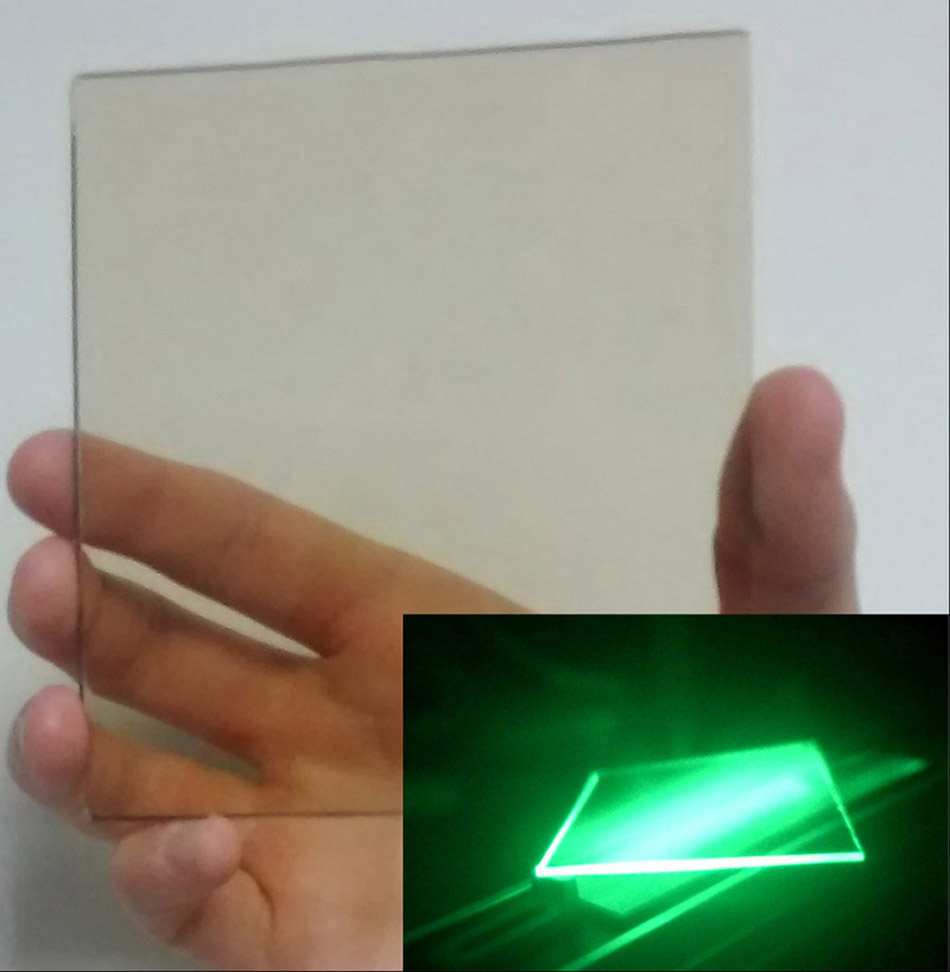 Figure 2. Photograph taken under ambient light of an LSC based on QDs of the semiconductor CuInSexS2−x. Inset: Photograph of the LSC taken under UV illumination with an IR camera, showing the bright near-IR emission emerging from the slab edges.

Another advantage of LSCs based on heavy-metal-free QDs with extended absorption is that they do not introduce any significant distortion to perceived or transmitted colors, which is a key requirement for their application in building-integrated PVs. A complete colorimetric characterization demonstrates that our LSCs behave as uncolored sunglass lenses, with CIE L*a*b* color coordinates that correspond to the dark brown range of Munsell's color atlas. Furthermore, they do not introduce any appreciable color distortion to the transmitted light (the color rendering index of the transmitted noon daylight is 91) nor modify the indoor-to-outdoor chromatic perception evaluated with the Farnsworth–Munsell 100 hue color vision test.

In conclusion, we have demonstrated that it is possible to use stable and environmentally friendly QDs to produce large-area LSCs characterized by high optical efficiencies. In future work, we will realize our prototypes by integrating them in buildings as PV windows. Such windows would have a limited impact on the building's aesthetic appearance, and on its inhabitants' perception of transmitted colors.

Francesco Meinardi is professor of the physics of matter. His research activity includes the photophysics of organic materials, colloidal QDs, and dielectric materials for optoelectronics.

Sergio Brovelli is professor of experimental physics and nanotechnology. His activity focuses on physical processes confined at the nanoscale in relation to the composition and nanoarchitecture of organic and inorganic nanostructured materials for applications in optics, photonics, renewable energy, and biomedical technologies.

Victor I. Klimov is a research scientist in the Chemistry Division. His research focuses on optical spectroscopy and applications of semiconductor nanocrystals.