In the pursuit to solve the fossil fuel energy crisis, the use and development of photovoltaic technologies is thriving. In this technology, nature's most abundant source of energy—sunlight—is directly tapped. To achieve this, light-absorbing materials that are highly efficient, lightweight, low-cost, and stable during operation are required. Organolead halide perovskites1 are one such class of materials that show promise for photovoltaic applications, and they have recently become a strong focus of solar cell research. Indeed, their cell efficiency has been increased to about 20%2 within only a few years. Organolead halide perovskites are popular because their raw materials are plentiful and cheap, and because they can be fabricated in a simple manner (i.e., optimal prerequisites for cheap solar power). The limited stability of many perovskite absorbers under ambient conditions, however, may ultimately limit the widespread adoption of these materials in solar cells (especially if heavy and costly packaging is to be avoided).

The main issue that gives rise to the poor stability of perovskites is water ingress3 and the subsequent liberation of highly corrosive species that rapidly damage metal contacts. In a previous attempt to overcome this problem,4 thick carbon electrodes were used to enable solar cell operation under ambient conditions. Nonetheless, if power output per solar cell weight (a critical metric for all mobile applications)—as well as power conversion efficiency—is to be optimized, alternative strategies are required. In such approaches, it is necessary to maintain the thin and light form factor of a direct band gap absorber material.

In our approach,5 we thus demonstrate ultrathin (3μm), highly flexible perovskite solar cells that have stabilized 12% efficiency and a power-per-weight value as high as 23W/g. To realize these devices, we use 1μm-thick plastic foils as substrates and we process (from solution, at low temperature) pinhole-free perovskite films at high yield. We achieve perfect growth of tightly packed perovskite crystallites by treating the transparent polymer electrode with dimethyl sulfoxide. In addition, we introduce a chromium oxide–chromium interlayer, which effectively protects the metal top contacts from reacting with the perovskite, to facilitate air-stable operation. The detailed structure of our solar foils is depicted in Figure 1, together with a photograph of the freestanding ultrathin solar cell. The transparent conducting electrode and the absorber layer are processed from solution, and the electron-selective metal top contacts are thermally evaporated. 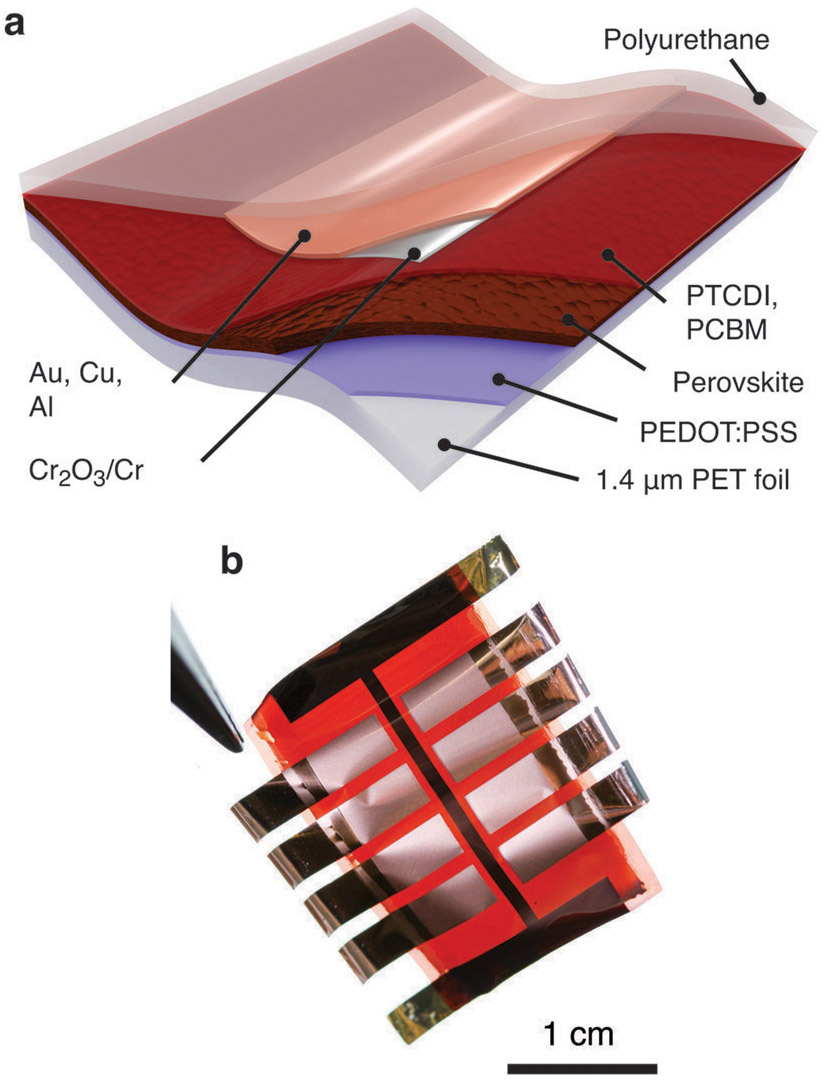 Solar cells that have aluminum or gold in direct contact with the perovskite degrade immediately upon exposure to ambient atmosphere. The ingress of water into the absorber layer causes this degradation of the perovskite crystal structure, i.e., by the formation of intermediate hydrated phases. The degradation culminates in the reforming of lead iodide, after enough water has permeated the film. In contrast, chromium oxide is resistant to aggressive oxidizing conditions (even nitric acid and aqua regia). It is for this reason (i.e., the excellent stability) that chromium plating is used to form corrosion-resistant coatings on various metals, and why we use a chromium oxide interlayer to provide an excellent buffer to shield the top-contact metal from chemical etching.

We packaged our air-stable, thin, light solar cells (with a micrometer-thick spray-on polyurethane coating) so that they could be operated in field tests, where we used the solar panels to power various unmanned aerial vehicles. A snapshot of our model airplane, on a solar-powered flight, is shown in Figure 2. The same airplane is shown with our solar-powered blimp and a ‘solar leaf’ in a short video clip available online.6 For these tests, we powered the airplane and blimp with a 3μm-thick, 5.2g/cm2, light solar panel (with 64 individual cells). The high power-per-weight performance of our devices (i.e., up to 23W/g) is vital for such applications. Several other solar technologies for decentralized power generation and distribution (e.g., blimps, weather balloons, robotic insects, smart buildings, and aerospace applications), environmental and industrial monitoring, rescue and emergency response, as well as tactical security applications, all have a similar requirement. With our new technology we combine high power conversion efficiency, minimal weight, flexibility, mechanical resilience, operational stability, and low cost in a single platform and thus make the realization of these future concepts possible. 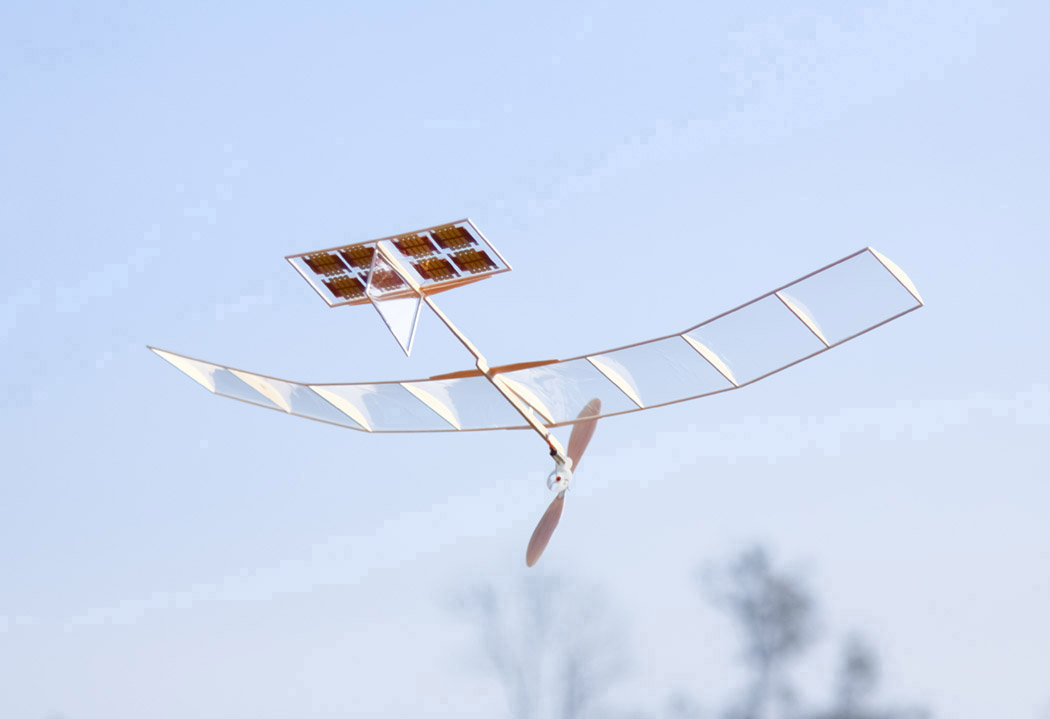 Figure 2. Snapshot of the model airplane powered by the perovskite solar cell. This image was captured while the airplane was flying on a sunny winter afternoon (on the campus of the Johannes Kepler University). The airplane has a total weight of about 4.8g and is powered by air-stable, 3μm-thick solar arrays (with a power-per-weight value of 23W/g). The wingspan is 58cm.

Through our tests we have also clearly demonstrated the high yield at which we fabricated the solar cells (even on thin, rough plastic foils). Our solar foils are extremely flexible and can endure severe mechanical deformation. In addition, they become stretchable (as shown in the video6) when they are laminated on a pre-stretched rubber band and they conform to arbitrary surfaces. Our foils are therefore ideal power sources for applications where conformability, stretchability, and light weight are required (e.g., portables, wearables, and robotics).

In summary, we have presented a novel approach for achieving ultrathin, highly flexible perovskite solar cells. Our devices exhibit stable operation in air, 12% efficiency, and a power-per-weight value of up to 23W/g. The concepts we introduce (i.e., plastic foil substrates and chromium oxide interlayers) are readily applicable to the growing family of perovskite absorbers and could be used to increase the power-per-weight of such materials even further. By merging high efficiency, low weight, and extreme flexibility in our single photovoltaic platform, there seem to be few obstacles to keeping perovskite solar cells grounded. Indeed, our aeronautic models are still fully functional more than six months after their initial flights. In our future research we plan to focus on realizing perovskites with improved efficiency and moisture resistance (by exploring electrode transport materials, alternative metals, and superhydrophobic coatings). We will also investigate further ways to unify the high efficiency of perovskite cells with the low weight and flexibility of our technology.

Martin Kaltenbrunner received his PhD from the Johannes Kepler University Linz and then joined the Someya-Sekitani Laboratory for Organic Electronics at the University of Tokyo, Japan. He is now an assistant professor. His research interests include soft transducers, photovoltaics, as well as thin-film, flexible, and stretchable electronics.

Siegfried Bauer received his PhD from the University of Karlsruhe, Germany. After stays at the Heinrich Hertz Institute in Berlin and the University of Potsdam (both Germany), he became a professor at the Johannes Kepler University Linz. He has has been head of the department since 2002. His research is devoted to functional soft matter.

Niyazi Serdar Sariciftci received his PhD from the University of Vienna, Austria. Following time at the University of Stuttgart, Germany, and the University of California at Santa Barbara, he became a professor at the Johannes Kepler University Linz in 1996. He has been a fellow of SPIE since 2009. His research is focused on organic photovoltaics and energy conversion.