Microlasers can be embedded inside single mammalian cells, enabling the tagging of a large number of cells and very sensitive real-time sensing of the forces and refractive indices within cells.

Fluorescent probes are indispensable tools in cell biology and medicine. These probes are used to stain different parts of cells and tissues for the purpose of imaging and diagnostics, and also for cell tagging. However, although very useful, their broad emission spectra limits the ability to multiplex many colors. No more than 10 fluorophores can typically be distinguished without ambiguity.

Lasers, on the other hand, have very narrow emission spectra. Their wavelength selectivity has led to wide applicability in sensing and medical sciences. Lasers consist of a gain medium, an optical cavity, and a pump energy source. It has been discovered that biological molecules or biocompatible materials can be used as the laser gain medium and that changes to the biological materials within the laser can lead to a change in the light output.1 Additionally, light produced within the tissue can be used for imaging and therapeutic purposes. For example, green fluorescent protein (GFP) produced within genetically modified cells or bacteria has been used as the gain in a microlaser. To make the laser cavity, the cells were sandwiched between two external mirrors2 or confined within a water droplet.3 Various biological tissues impregnated with a fluorescent dye have also been used in a random laser.4

We have taken this one step further by making a laser within a single live cell.5, 6 The laser microcavity is based on whispering-gallery modes (WGMs), which are formed when light is trapped by total internal reflection at the surface of a transparent spherical object (e.g., a hard bead or droplet several micrometers in size), causing the light to circulate around the surface. The optical gain is provided by a fluorescent dye inside or near the surface of the cavity, which is pumped by an external pulsed laser.

We used solid fluorescent beads made of polymer or glass as laser cavities. Cells spontaneously internalize these beads by endocytosis: see Figure 1(a). Different-sized beads have distinctive lasing spectra—see Figure 1(b)—which can serve as spectral barcodes and can be used to identify specific beads by their diameter. By using commercially available polydispersed beads, more than 2000 bead diameters can be distinguished. Furthermore, because different fluorescent dyes can be used for multiplexing and one cell can eat more than one bead, the number of unique tags could reach 2×1011. This number is close to the total number of cells in a small animal. It is therefore reasonable to assume that the tagging and tracking capabilities of cell lasers could be used to study the dynamic behaviors of a large number of cells in a human. Because the lasing wavelength of WGMs is sensitive to the surroundings of the bead, WGMs could therefore be used to sense the interior of the cells in vivo. We have shown that changes to the refractive index inside cells can be measured with great accuracy. Functionalizing the beads could also enable chemical sensing, leading to new insights into cellular processes.

Figure 1. (a) Solid fluorescent polystyrene bead (green) inside a cell. (b) Spectrum of light emitted from a bead in a cell when pumped by an external laser, showing characteristic laser lines. nor.: Normalized.

Droplets can also be used as laser cavities. We injected a droplet of an inert high-index polyphenyl ether oil containing Nile red fluorescent dye into a cell via a micropipette: see Figure 2(a). Upon pumping with an external laser, the droplet within the cell emits light with sharp spectral lines that are typical of lasing: see Figure 2(b). Because of their soft nature, droplets can be deformed by forces acting inside of the cells. By analyzing the light emitted by a droplet laser, this deformation can be measured and the force acting on the droplet can be calculated. This method enables very precise measurement of the mechanical forces acting within cells in various biological processes, such as cellular migration and division. 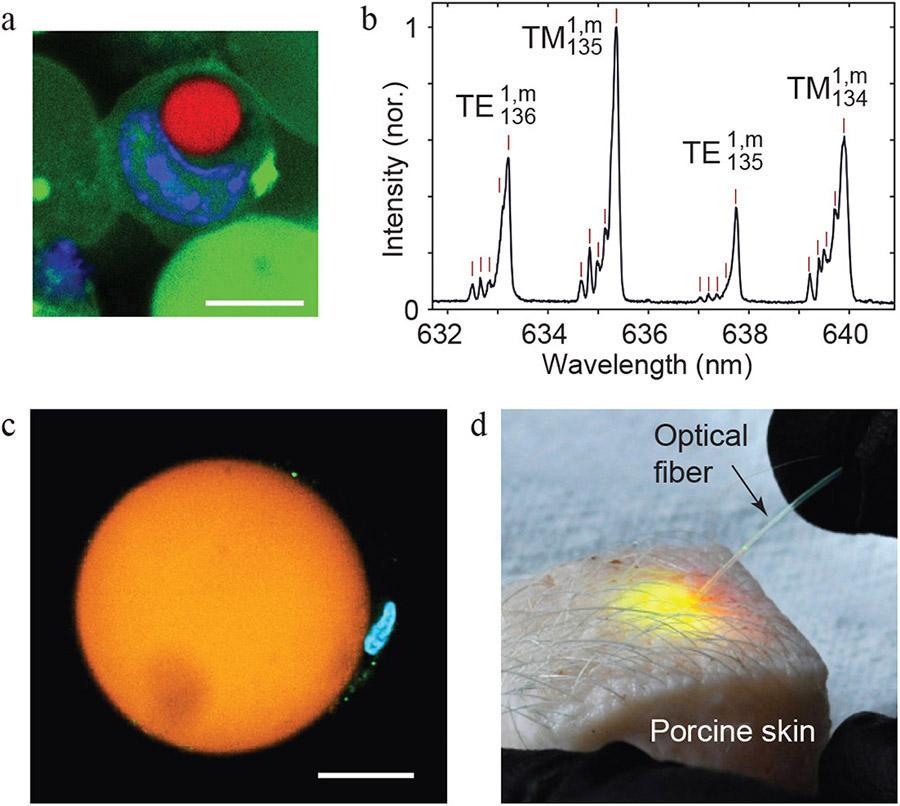 As an alternative to injecting droplets into cells, fat cells (adipocytes) that naturally contain lipid droplets can be used as natural laser cavities. Adipocytes that are extracted from porcine subcutaneous tissue and stained with a fluorescent dye—see Figure 2(c)—readily emit laser light upon excitation with external pulsed laser light. We have also achieved lasing inside porcine fat tissue. Fluorescent dye is injected into the fat tissue and an optical fiber is inserted through the skin to excite the lasers and collect the generated laser light: see Figure 2(d).

We have demonstrated lasing inside live cells via the injection of photoactive beads or droplets. We have also shown this method to have potential applications for intracellular sensing and the tagging of a large number of cells. In future work, we intend to further decrease the size of the lasers, thereby enabling even subcellular organelles to be targeted. We also plan to show the capability of cellular lasers in vivo.