Photoelectrochemical (PEC) conversion of solar energy to hydrogen by splitting water (into hydrogen and oxygen) is an environmentally benign way to provide storable and transportable chemical fuel, enabling a sustainable and renewable energy source. PEC systems operate spontaneously when the additional bias (or ‘ overpotential’) of the system is greater than the sum (1.8∼2.4eV) of the thermodynamic and kinetic potentials. There are various prototypes of tandem-style systems proposed for commercial PEC, including photovoltaic-electrolysis,1dual-semiconductor absorber,2 and colloid-based ‘Z-scheme’ photocatalytic systems.3 These all achieve self-biased water splitting by generating photovoltages greater than 2eV, but also have low photocurrent (below ∼10mA/cm2) because of the difficulty in matching currents between cathode and anode, which then results in too low a power output (≤12mW/cm2).

To increase the output current, we undertook water splitting by serial coupling of PEC and thermoelectric (TE) devices,4, 5 which allowed us to capture photons and waste heat from both modules (see Figure 1). A temperature gradient across the TE module was converted to thermovoltage (VTE), offsetting the potential required for spontaneous water splitting, but retaining a high photocurrent (∼44mA/cm2) from the silicon (Si) photocathode. The TE acts as a voltage booster, while the connected PEC is a current source with built-in photovoltage. With the help of waste heat, and depending on the bandgap of the semiconductor materials, our PEC-TE hybrid system overcomes the inherent tradeoff between photovoltage and photocurrent. Using our system, we achieved power generation for hydrogen evolution of 55mW/cm2, which is nearly four times greater than the value obtained by a sole PEC cell. In addition, this hybrid operation does not require the use of noble metals such as platinum or iridium because the thermovoltage alone is able to cancel the kinetic overpotential. 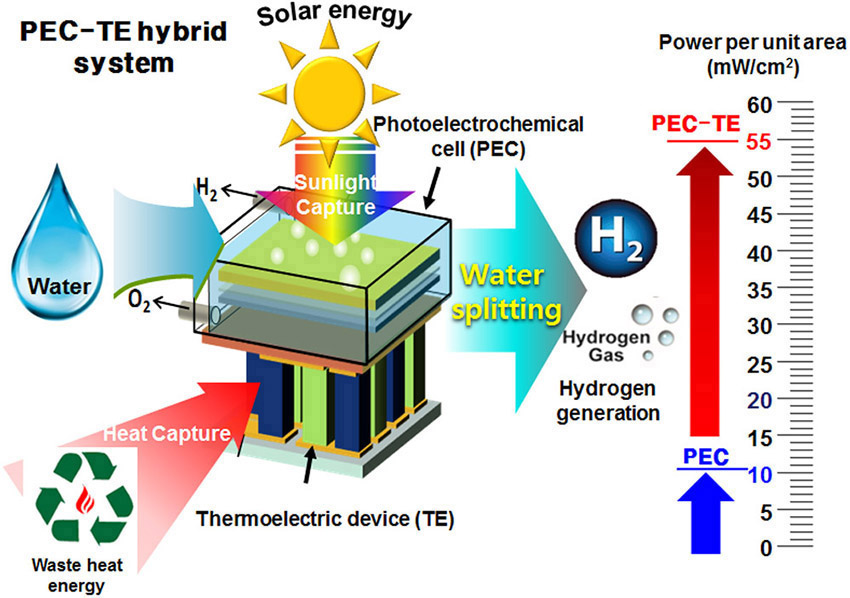 We used a silicon photoelectrode, which has a narrow bandgap of 1.1eV and potentially generates a high photocurrent of ∼44mA/cm2. To further enhance the light absorption of the planar silicon, we integrated silicon nanoholes (SiNHs) on the surface using metal-assisted electroless etching.6, 7 In tests, this nanohole-integrated silicon achieved a photocurrent of 42mA/cm2 through superior antireflectance (see Figure 2). 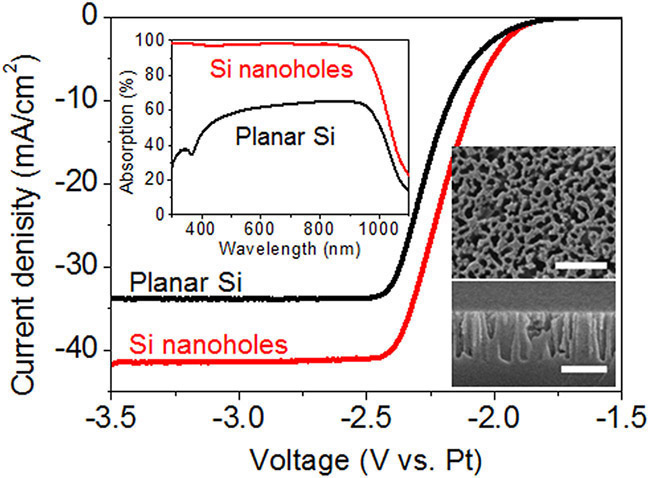 We used bismuth-tellurium-based commercial TE devices in our hybrid system, generating 350mV of VTE from a temperature gradient (ΔT) of 10°C. As shown in Figure 3(a), the VTE can reduce the Fermi level of a counter electrode below the oxygen evolution level (downward), so as to spontaneously drive water splitting. We characterized the linear sweep voltammetry (LSV) measurements as a function of ΔT—see Figure 3(b)—and observed an anodic shift of the LSV curve with increasing ΔT, while maintaining high photocurrent level and fill factor (maximum power from the device). This validated that VTE from the TE device effectively offsets the potential required for water splitting, without PEC performance loss. As a result, we achieved self-biased water splitting, producing a high photocurrent of 42mA/cm2 at ΔT of 70°C.

Figure 3. (a) Schematic illustration showing the energy band diagram of a PEC-TE hybrid system. The amount of thermovoltage (qVTE) generated by the TE device via a temperature gradient (ΔT) can adjust the Fermi level of the counter electrode. (b) LSV characteristics of the PEC-TE hybrid device using a SiNH photocathode, as a function of ΔT. The LSV curve shifted in the anodic direction with increasing ΔT in TE. ΔT at 70°C achieved a self-biased water-splitting reaction at a saturated photocurrent of 42mA/cm2.4Eo: Energy level.

We collected the hydrogen (H2) gas under simulated AM 1.5G 1-Sun illumination while operating at photocurrent levels of 7, 20, and 32mA for 50 minutes: see Figure 4(a). The measured volumes corresponded well to theoretically calculated values at 100% Faraday efficiency based on the total charge passed, and this indicated that the generated charge is fully involved for facilitating hydrogen evolution. We plotted the maximum generation of hydrogen power (PMax) for the sole TE device and the PEC-TE hybrid system (employing SiNH and planar silicon photocathodes) as a function of ΔT in the TE: see Figure 4(b). A planar PEC–TE hybrid system generated a PMax of 42 mW/cm2, while the antireflective SiNH photocathode achieved 55 mW/cm2 in the hybrid operation, which is four times greater than that obtained by a conventional PEC system.

Figure 4. (a) H2 evolution of the PEC-TE hybrid system measured by a volume displacement measurement at a photocurrent level of 7 (blue), 20 (red), 32mA (black). The symbols represent the measured volumes of collected hydrogen, and the dotted line the calculated volumes. (b) H2 power generation of a TE system and PEC-TE hybrid system using planar Si and SiNHs. Violet and gray dotted lines indicate the theoretical limit in the PEC-TE system with a Si photocathode, and reported maximum H2power of the photovoltaic-electrochemical system, respectively.

In summary, we have developed a hybrid concept of PEC and TE devices to facilitate efficient water splitting. Applying VTE from the TE device enabled self-biased solar water splitting at a high photocurrent of 42mA/cm2. Our PEC-TE hybrid system synergistically harvested solar and waste heat energies to generate a high hydrogen power of 55mW/cm2. Our next step is to develop an advanced hybrid device realizing long-term durable operation of solar water splitting.

Jung-Ho Lee is a professor of chemical engineering. He received his MS and PhD in materials science and engineering from the Korean Advanced Institute of Science and Technology. His research includes nanostructured silicon solar cells and photo/electrocatalytic water splitting using silicon and carbon.