The Instrument Technology Research Center (ITRC) is a government-funded institute in Taiwan. Since it was founded in 1974, the work of the center has been devoted to the development of advanced vacuum systems, optical instrumentation, as well as lens manufacturing and testing. In the following decades, a service platform for optical application and instrumentation has also been developed at the center. Recently (March 2015), the center announced the first domestic creation of a lithography projection lens system for 3D integrated circuit steppers (see Figure 1).1 The overriding purpose of these endeavors is to match Taiwan's national technology demands, to bridge academia and industry, and to provide engineering prototypes and customization.

Since the end of the 1990s the ITRC has been focused on developing large aspherical optics to support Taiwan's national remote sensing instruments.2 The semiconductor industry is a major part of the country's science sector. Therefore, this aspherical optical manufacturing technology has been extended to the application of lithography optical systems. Furthermore, the ITRC provides precision optical engineering services (e.g., consultation, design, and manufacturing) to the semiconductor industry supplier chain.

In this work, we describe various optics projects that have been, and are currently being, conducted at the ITRC. We also outline the manufacturing processes that we use in our work. We are currently dedicated to achieving high-precision, aspheric, and freeform optics. As such, traditional polishing technologies have been integrated with deterministic computer-controlled optical surface (CCOS) facilities at the ITRC in recent years. A conventional interferometer and a QED Technologies aspheric stitching interferometer (ASI) are used to quantify optical surface errors. In addition, we use a QED Q-flex 300 magnetorheological finishing (MRF) system and a Zeeko polishing machine to deterministically correct optical surfaces to high levels of precision.

Our manufacturing process, for both spherical and aspheric surfaces, is illustrated in Figure 2. In the first step we use a grinding process to generate a sphere shape. A conventional lapping and polishing process is then used to remove the subsurface damage layer and to control the radius of curvature (this can be achieved with high efficiency because of its full aperture processing). The third and fourth steps involve the aspherization polishing cycles for an aspheric surface. Sub-aperture computer-controlled surface smooth technology and a profilometer are used together for these steps. The final two steps of the process are the surface correction polishing cycles. These involve the use of the ASI and the MRF system. Our manufacturing process involves deterministic polishing removal. We therefore obtain highly efficient surface quality control, as well as good cost effectiveness.

Figure 2. The modern optical manufacturing process used for spherical and aspheric surfaces. In this process, conventional polishing and computer-controlled surface finishing techniques are combined. Curvature generation takes place on an SPM 120 SL machine, and a Zeeko IRP1000 is used for aspherization polishing. In addition, a FormTalysurf profilometer, an aspheric stitching interferometer (ASI), and a magnetorheological finishing system (MRF) are used in the process.

The first projects at ITRC's optical shop were undertaken between 2009 and 2012. These involved the production of a parabolic primary mirror (with a diameter of 460mm) and a hyperbolic secondary mirror (with a diameter of 160mm). Our finished primary and secondary mirrors had a root mean square (RMS) of 10nm and a peak-to-valley (PV) ratio of 80nm. They were delivered for a telescope science payload, as part of Taiwan's aerospace program.3, 4 Based on these successful projects we are currently working on other manufacturing technology for lithography optics. Our first such project is a Dyson projection lens, which comprises three lenses and one concave mirror (see Figure 3). In this configuration, two aspheric surfaces are deployed on the right-hand surface of the first lens (L1) and concave mirror. The optical components of the projection lens have a diameter that ranges from 200 to 300mm. We have manufactured all these optical components in our optical shop. The manufacturing results of the lenses (see Table 1) indicate that the MRF system can provide favorable corrections to figure errors in a conventional process with only one correction iteration. The figure error after the MRF finishing of the L1 aspheric surface—which is a large departure from a best fit sphere—is 88nm PV, with a 129×187mm clear aperture.

Although our optical components can be finished by using conventional processes and CCOS, deformation caused by mounting and gravity can significantly contribute to the optical system wavefront error. Consequently, we have developed a semikinematic mounting and freeform correction polishing technology to use for our next lithography optical system. Such semikinematic mounting can provide a repeatable and predictable deformation. The measurement results of three mounting processes (for a lens with a diameter of at least 150mm) are shown in Figure 4(a). The major deformation is primary trefoil, with a PV ratio of about 0.14 wavelength. We can correct this trefoil freeform error by one iteration of the MRF system. The surface form error of our final assembled lens—see Figure 4(b)—is 27nm PV.5,6 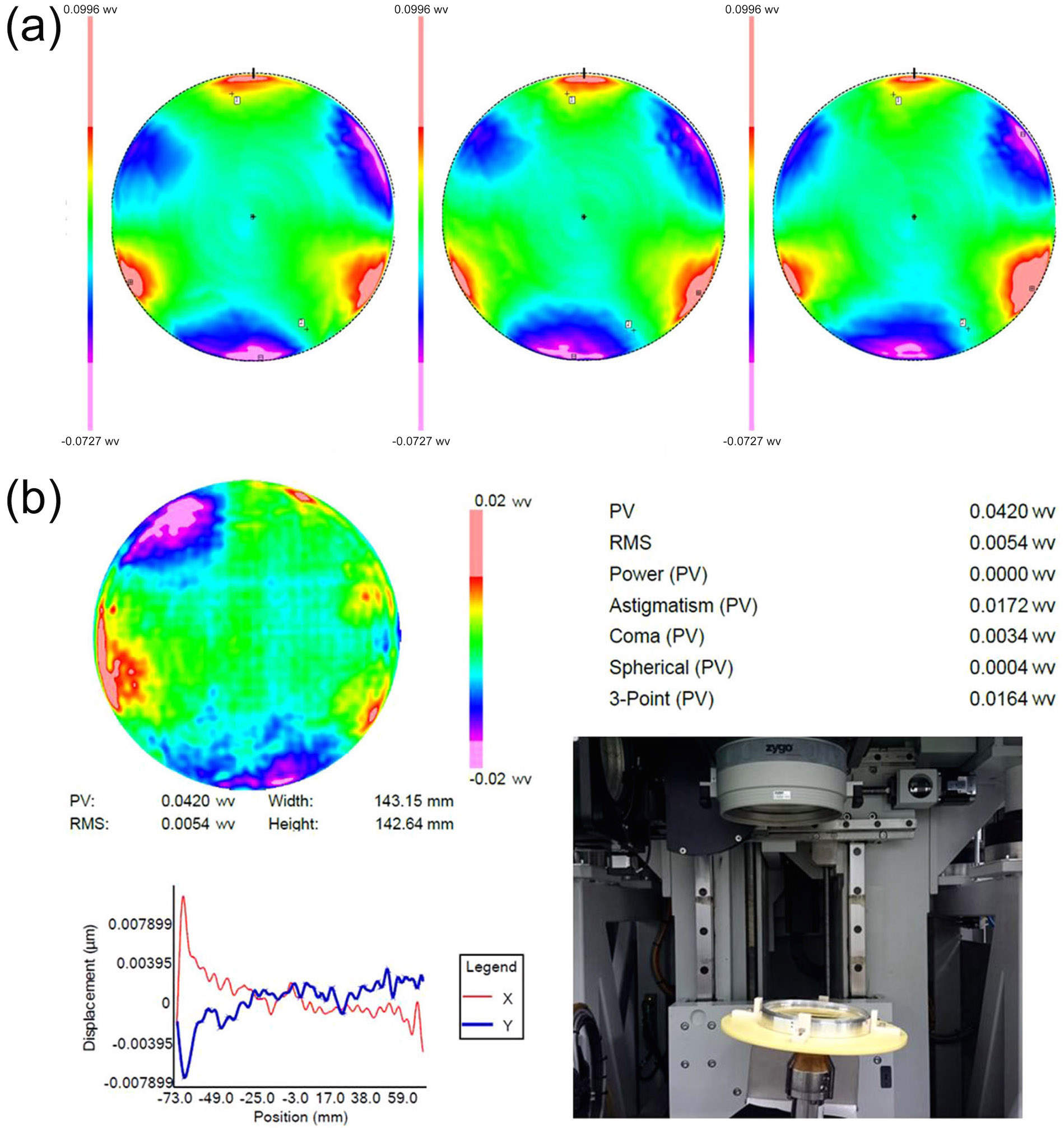 Figure 4. Measurement results of (a) three mounting processes for a fused silica bioconvex lens (with a diameter of 150mm and 143mm clear aperture) and (b) freeform correction polishing for optics with semikinematic mounting. The semikinematic mounting can provide repeatable and predicable deformation. With one iteration of the MRF correction, the final figure error has a peak-to-valley (PV) ratio of 27nm and a root mean square (RMS) of 3.4nm. Threefold PV and fourfold RMS improvements can thus be achieved. wv: Wavelength.

At the ITRC, we are involved in developing lithography optical systems. This work extends the application of aspherical optical manufacturing technology that we have previously established. Our first Dyson projection lens has recently been assembled and is currently undergoing testing. We are continuing to work extensively on optical manufacturing technology for lithography optical applications. We are also studying the art of opto-mechanical design and assembly technology. Our full lithography optical system, including the projection and illumination lenses, will be completed by the end of 2015. The ITRC will also facilitate a collaboration between domestic industry and academia to develop our lithography equipment in Taiwan.

Cheng-Fang Ho received his MS in physics from National Cheng Kung University, Taiwan, in 2002. Since then he has been at ITRC working on optical design and precision optical engineering.