Real-time, direct detection of chemicals commonly used in explosives is a perpetual requirement in transport and transportation security. Recently, investigations have shown that imaging and spectroscopy in the terahertz (THz) region offer effective techniques for detection of explosives and drugs. To take advantage of THz spectra and images, chemometrics (extracting chemical information by data modeling or manipulation) is essential for advanced data processing.1

THz spectroscopy enables identification of chemical substances by absorbance spectra (containing peaks or ‘ fingerprints’) that are specific to each powder.2 We investigated THz spectral imaging using a time-domain spectral imager, and raster scanned the different samples. This technique provides an image where each pixel consists of an entire absorbance spectrum. To automate the procedure of explosives recognition, we used two chemometric techniques on the THz spectral images. First, we applied the unsupervised principal component analysis (PCA) method to the series of data to be analyzed, and extracted similarities and differences between the data. Then we used partial least squares discriminant analysis (PLS-DA) to categorize samples in different classes. As objects for our study, we produced three pellets, each containing explosive materials. The first contained 80mg of cyclotrimethylenetrinitramine (RDX), the second 80mg of pentaerythritol tetranitrate (PETN), and the third a mixture of 40mg RDX and 40mg PETN. These are shown in Figure 1(a). 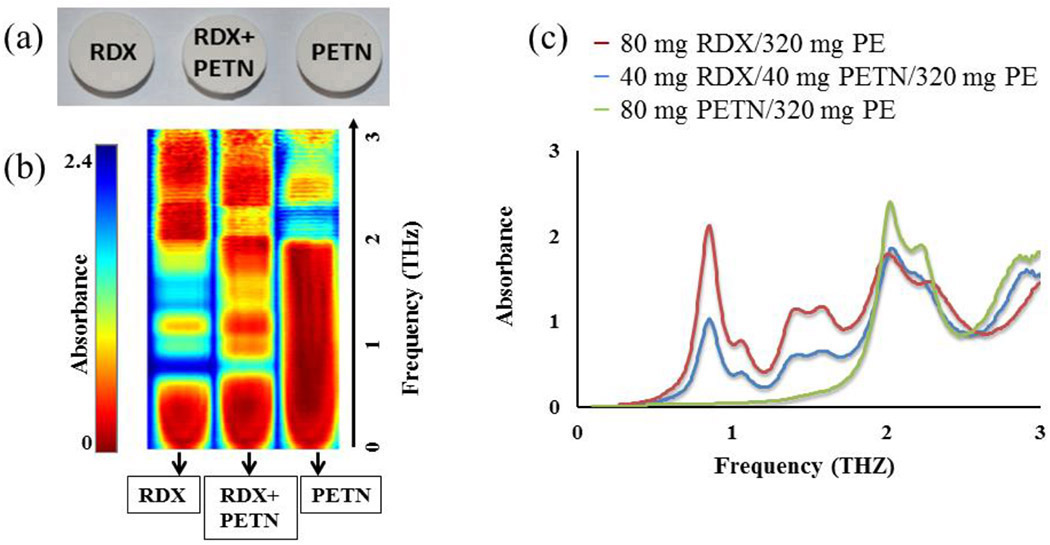 Figure 1. (a) Photo of three sample pellets containing the explosive materials cyclotrimethylenetrinitramine (RDX), pentaerythritol tetranitrate (PETN), and a mixture of the two (RDX/PETN). (b) Absorbance image of the three pellets between 0 and 3THz. (c) Absorbance spectra of the pure RDX (red), PETN (green), and their mixture (blue) diluted in 320mg of polyethylene (PE) as a binder.

PCA is the best-known unsupervised multivariate approach to describe both variations and similarities between data sets. It works by optimizing projections on variables called principal components, which are calculated from linear combinations of the original variables, and it allows for reduction in dimension of the data set.3 In our approach, we applied PCA to the THz absorbance image of the three explosives. We demonstrated that the 1452 pixels of the image are organized into three main groups of points corresponding to the three types of explosives. Applying PCA to image processing enhanced the image contrast, making it easier to interpret. Figure 2 shows that the frequencies 1.87THz—in Figure 2(b)—and 2.32THz—in Figure 2(d)—do not allow any discrimination between the three pellets. By contrast, the frequencies 0.8THz—in Figure 2(a)—and 2THz—in Figure 2(c)—display good contrast between the samples. PCA automatically provides the best contrast retrievable from the original data set. Indeed, the image reconstructed from the PCA scores—shown in Figure 2(e)—clearly reveals the highest contrast, as highlighted by the color code. 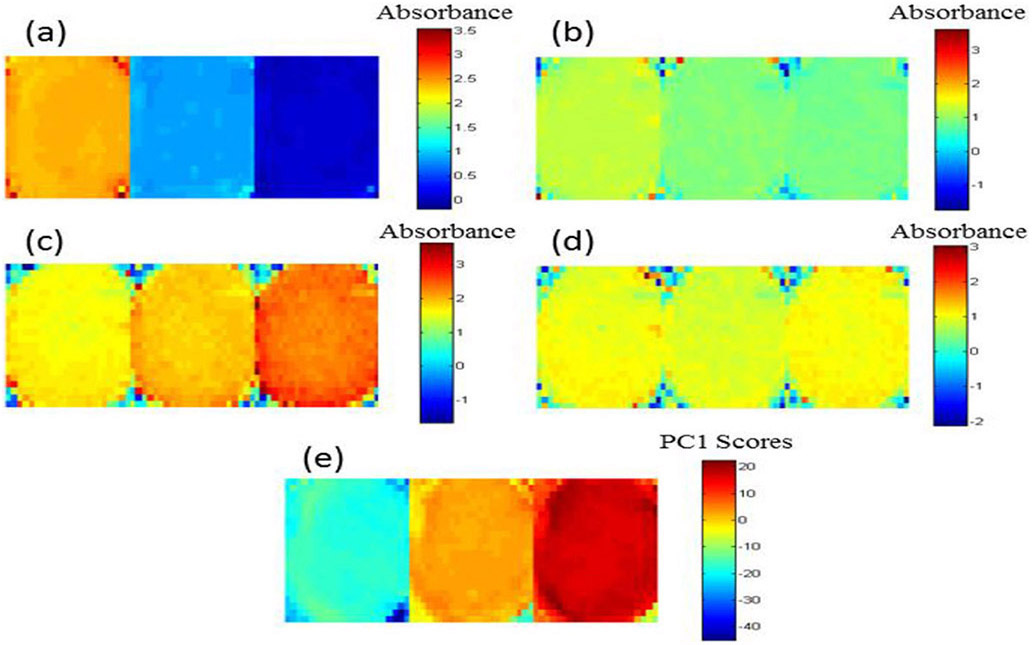 Partial least squares discriminant analysis (PLS-DA) is a multivariate technique applied for classification purposes. It differs from PCA by a learning step in which the model is trained to sort the input data into classes according to output values.4 We developed the PLS-DA model and applied it to the explosive pellets, with a particular focus on the pixels belonging to the central zone of each. In this way, we aimed to sort the data into three classes of explosives. We built the model with 360 pixels, with the aim of predicting 330 pixels unknown to the model. The results show 100% good classification of the pixels in the right classes as RDX, PETN, and the RDX/PETN mixture. Therefore, our approach was successful in classifying these three explosive products using THz absorbance spectra.

In summary, combining chemometrics and THz measurements provides a reliable method for identifying several illicit and dangerous substances. In our work, we showed the potential of PCA applied to THz absorbance images in automatically distinguishing different illegal products in images, without any preliminary learning phase. Furthermore, we revealed and identified specific explosives by applying PLS-DA to absorbance THz images, and classing each pixel as RDX, PETN, or an RDX/PETN mixture. Moreover, these chemometric analyses show the potential to distinguish an explosive mixture even when there is a significant resemblance in the absorbance spectra, or an overlap in the frequency range.

In future work, we will consider analyzing more complex data sets including a larger number of explosives. Furthermore, we will apply our study to explosive powders as well as pellets, to create real-world conditions for security applications.

This work was sponsored by the Agence Nationale de la Recherche, within the framework of the InPoSec (Integrated Postal Security) project.5