Compared with low-cost electrochemical and metal-oxide gas sensors, those based on optical absorption achieve high specificity, minimal drift, fast response, and a much longer lifetime. They therefore offer significant engineering potential for application in pollution monitoring, environmental protection, hazardous-material detection, early disease diagnosis, and the food industry. The absorption spectra of gas molecules exhibit narrow lines—particularly in the IR region—due to molecular vibrations at discrete energy levels. These narrow lines represent the signatures of gas molecules and can therefore be used for both their measurement and identification.

Most commercial mid-IR (2.5–10μm wavelength) gas-sensing technologies are based on benchtop Fourier-transform IR (FTIR) spectrometers and gas cells. These instruments are expensive and large, making them unsuitable for mobile or distributed sensing applications. The optical telecommunication industry has, however, developed miniaturized near-IR (NIR, 0.8–2.0μm wavelength) optical fibers and optoelectronic devices that are low cost and highly reliable. This has led to significant acceleration in the development of NIR sensors. The biggest challenge lies in the fact that most gases do not have fundamental vibration bands in NIR regions. The absorption must therefore come from overtones of the fundamental vibration bands, resulting in a relatively low detection sensitivity.

We have developed ultra-sensitive NIR fiber-optic gas sensors coated with a thin layer of metal-organic framework (MOF) materials for the detection of carbon dioxide (CO2). MOFs are a new class of highly porous crystalline material consisting of metal ions and bridging organic ligands that are linked together by coordination bonds. This class of material has been widely applied in chemical separation, gas storage, drug delivery, sensing, and catalysis applications due to the high surface areas that are enabled by its tunable nanostructured cavities.1–6 We have previously shown that an MOF film embedded with plasmonic nanoparticles enhances IR absorption at 2.7μm.7 In our NIR fiber-optic sensors, the MOF film coats the surface of the fiber core. This enables absorption of CO2 in the ambient environment and effectively increases the local CO2 concentration at the surface of the optical fiber. Interaction between the evanescent field and the gas analyte is thereby enhanced, leading to an increase in NIR detection sensitivity using a fiber that is only a few centimeters long.

To fabricate our NIR fiber-optic gas sensor, we grew nanoporous MOF materials on the surface of a fiber core: see Figure 1(a). To enable this process, we began by etching a 5cm region on the 1m-long single-mode fiber (SMF). After its protective polymer coating had been removed using a flame, the SMF was fixed onto a silicon substrate via UV epoxy. We then used a standard buffered oxide etchant (BOE) to etch away the cladding layer of the SMF. During the etching process, the fiber was connected to a 1.55μm laser diode and we used an optical power meter to monitor the optical transmission through the SMF. When the transmitted optical power dropped by 1.5–2dB, the etching process was halted by removing the silicon substrate from the BOE and rinsing it with deionized water. We then grew the MOF on the surface of the etched region using the layer-by-layer (LBL) method.8 The SMF was first treated with oxygen plasma to increase the hydroxyl functional groups for MOF growth and then immersed in a 300mL ethanol solution, containing 10mM of the metal precursor (copper acetate) for 20min. The SMF was subsequently immersed in another 300mL ethanol solution containing 1mM of the organic ligand benzene-1,3,5-tricarboxylate (BTC) for 40min. Between each step, we rinsed the fiber with ethanol to remove the unreacted precursor ions or molecules to ensure uniform growth. The fiber was then naturally dried at room temperature for 10min. The copper-BTC MOF thin film was grown on SMF using the 40-cycle LBL method. 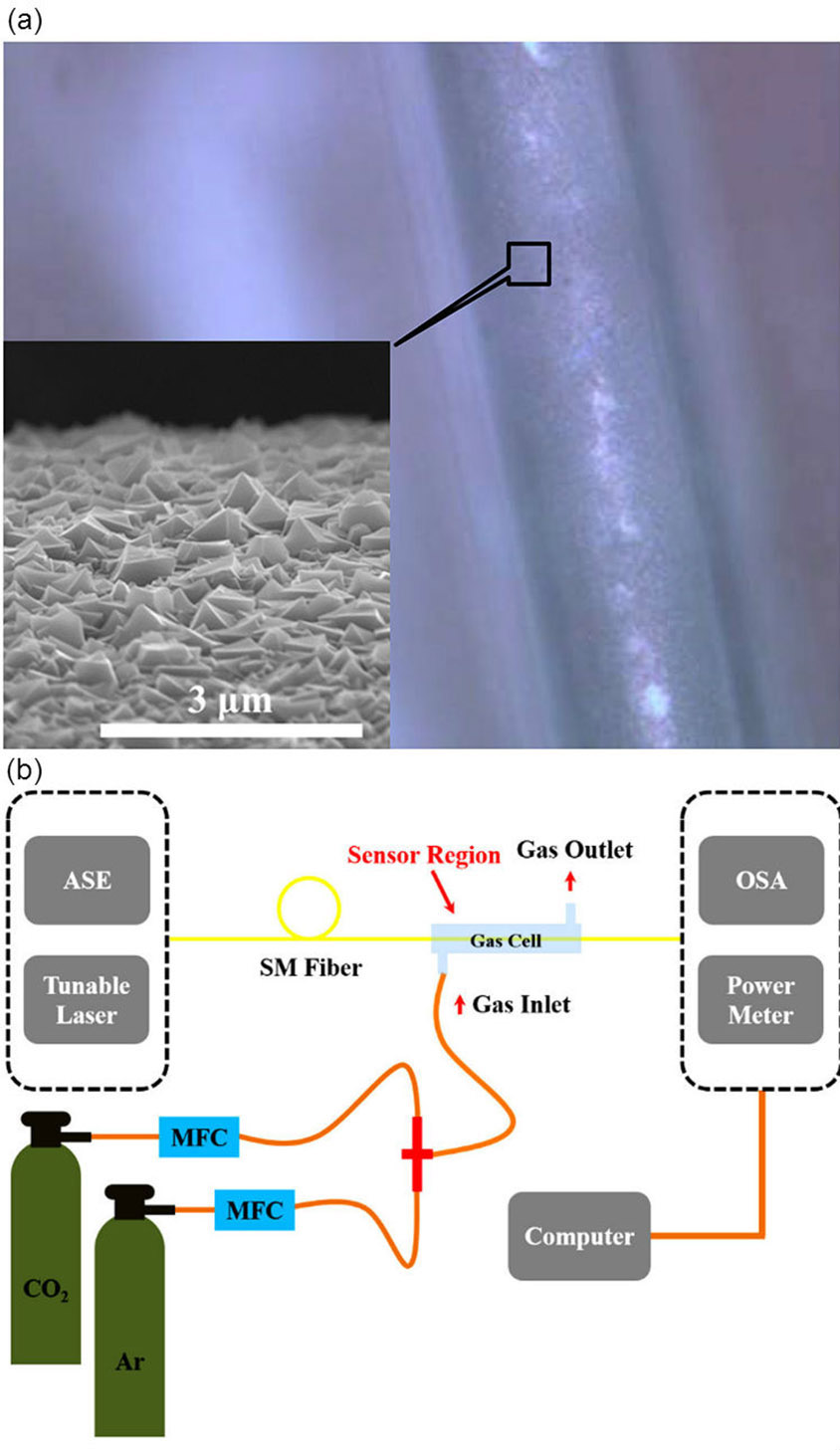 The experimental setup for CO2 sensing is shown in Figure 1(b). A tunable semiconductor laser diode and an amplified-spontaneous-emission light source are used to couple light into the fiber-optic sensor by fusion splicing another SMF with the gas sensor. The gas sensor is placed inside a gas cell, which is connected to CO2 and argon (Ar) gases. Light transmitted through the sensor is directly coupled to a power meter or an optical spectrum analyzer, and the data is collected by a computer. The gas flow rates can be tuned using mass-flow controllers (MFCs) with a flow range of 0–20mL min−1.

We determined the detection limit of our gas sensor by measuring the change of the transmission power as a function of CO2 concentration, which was varied by dilution with Ar. The lowest detectable concentration is about 20 parts per million (ppm): see Figure 2(a). The enhancement factor (γ), which we calculated based on the Beer-Lambert law, is shown in Figure 2(b). Evanescent field optical sensors usually have lower γ (<1) due to weaker light-matter interaction. However, the MOF enables CO2 to be concentrated inside the porous structure, resulting in a much higher CO2 concentration than the ambient environment. Therefore, the actual γ (>1) is the combined result of the evanescent-field and MOF-concentration effects.

Figure 2. (a) Average absorption and (b) enhancement factor as a function of CO2volume concentration in Ar.

Alan X. Wang has been an assistant professor since 2011. He received his PhD in electrical and computer engineering from the University of Texas at Austin in 2006. His research focuses on optical sensing and optical interconnects.