Adapted refractive steppers are used to reduce the speckle contrast of a laser beam after determination of its coherence length and periodicity function.

When a laser is used as an illumination source, the shape of its light is influenced by the well-known ‘speckle effect.’ Speckle is a visible effect of light interference and directly depends on the coherence length of the laser. In some dedicated studies, speckled and unspeckled images were presented to a human operator.1 These cases highlighted and were used to quantify the strong impact of speckle on detection, reconnaissance, and identification ranges. Although speckle contains useful information on the phase of the illuminating light, for intensity-based recordings speckle appears to be a problem. Speckle can therefore be a major drawback on active imaging performance, and it is necessary to find ways to counter its effects.

According to Goodman's theory of speckle reduction,2 speckle contrast is reduced by a factor of

(where m denotes uncorrelated speckle patterns). If the integration time of the image recording is sufficiently long, a multiple frame addition technique3 can be an efficient way to reduce the speckle contrast (see Figure 1). However, for fast-moving targets, or for low repetition rate high-energy pulsed lasers, this approach is not possible. The coherence length of a laser source cannot be modified without alteration of the laser parameters. Only ‘extra cavity actions’ can thus be used to change the amount of speckle. Several different parameters, including wavelength,4 polarization,5 angular diversity,6 and spatial diversity7 can be used in speckle reduction techniques.

Figure 1. Images of the same scene recorded in an accumulation mode (left) and a flash mode (right). When the integration time is sufficiently long, multiple frame addition can be an efficient way to reduce the speckle contrast. 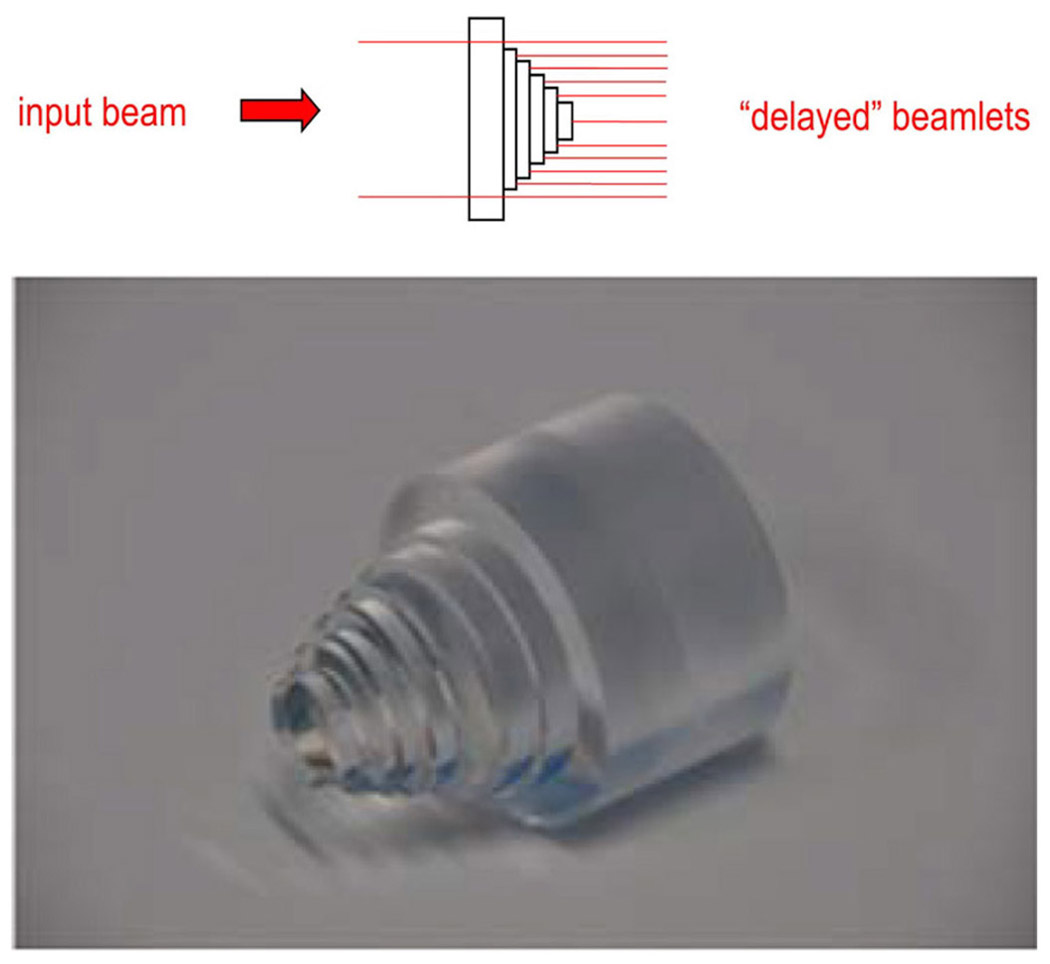 Figure 2. Top: Illustration of how laser spatial diversity can be generated by a stepper element. Bottom: An adapted refractive stepper element fabricated from optical-grade diamond-turning polymethylmethacrylate.

To obtain m uncorrelated beamlets, we have designed our refractive steppers according to several parameters. First, we calculate the step thickness (e) from the coherence length ( lc) of the laser source and from the index of refraction of the transparent medium. Second, we define the number of steps (m) in the steppers by a periodicity function that depends on the laser cavity length (L). Lastly, we ensure that each beamlet has the same power. This corresponds to the total laser power, distributed over all m beamlets. We assume that there is a constant intensity of light (i) incident to the stepper and therefore each of its rings must have the same surface. With these design constraints, the expected speckle contrast reduction (SC) from our steppers is equal to

For our speckle contrast analysis, we used a slightly modified Michelson interferometer to directly determine e. In this experiment we slightly tilted the alignment of both arms so that two beams from the same source overlapped, but so that we avoided the formation of fringes. We then used a high-resolution camera to record the speckle contrast (see Figure 3). We moved the mobile arm to produce a path difference (Δx) until the speckle contrast dropped to a value of

We have performed an experimental recording with a red-emitting (660nm) continuous-wave single-emitter laser diode and an adapted stepper element that we fabricated from optical-grade diamond-turning polymethylmethacrylate (as shown in Figure 2). The results from this experiment are shown in Figure 4(a), in which the periodicity function of the laser can be observed. From our recorded values we are able to calculate both the coherence length (2 × 10−3m) and the cavity length (6.25 × 10−3m) of the laser. When we apply the relation that gives the number of beamlets, we deduce that we can generate six fully uncorrelated beamlets. This corresponds to a maximum speckle contrast reduction of 59%. Our recorded speckle contrast results are shown as a function of the number of steps in Figure 4(b). We see that the experimental curve follows the theoretical values that are given by Goodman's theory. For higher values, however, the curve reaches a saturation limit that corresponds to the periodicity function of this laser. 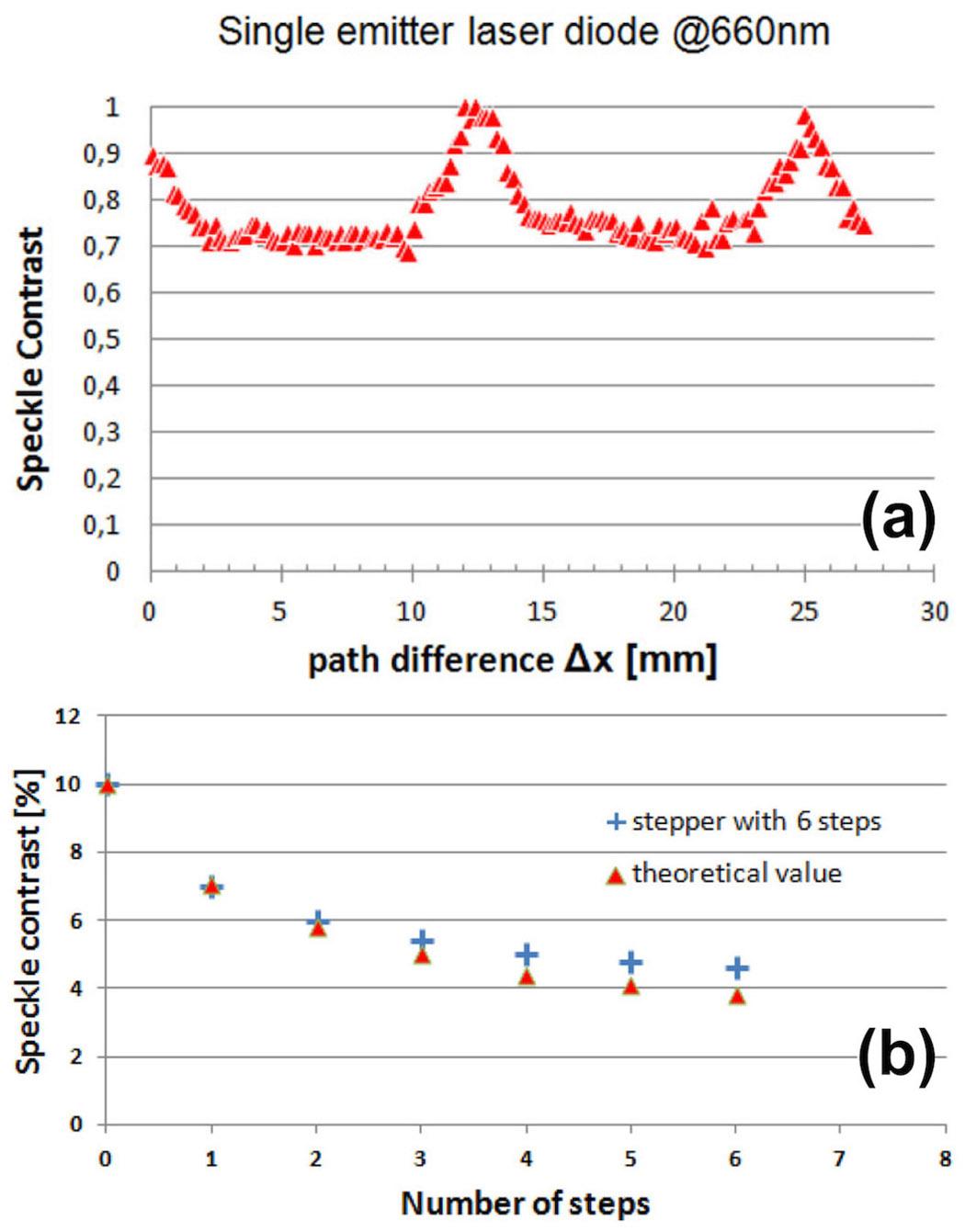 We have presented and experimentally validated a methodology for speckle reduction of laser illuminators, which is based on spatial diversity. We analyze the beam from the laser to determine both its coherence length and periodicity function. When we place the corresponding refractive stepper in the laser beam, an instantaneous speckle contrast reduction occurs. We are thus able to achieve an efficient, compact, low-cost, and easy-to-align solution for speckle reduction. In the next stages of our work we will apply this validated method to reduce the speckle contrast of a high-energy pulsed optical parametric oscillator laser, which we use in our active imaging applications.6

Yves Lutz received his MSc and PhD in laser physics from the University of Franche-Comté and the University of Haute-Alsace (both in France), respectively. He specializes in the development of laser sources and laser illumination devices.