A technique that distinguishes single from multiple scattered waves achieves microscopic imaging with a near-diffraction-limit resolution of 1.5μm, at depths that would benefit medical applications.

Optical imaging is an indispensable tool in life sciences because it enables minimally invasive visualization of subcellular structures with high resolving power. When it comes to medical practice, however, its use for in vivo applications has been limited to either inspecting transparent organs such as the eyes, or examining only superficial layers. The shallow imaging depth of optical methods constrained by multiple light scattering in biological tissues has so far prevented optical imaging from being a mainstream diagnostic tool in medicine.

There have been numerous attempts to increase imaging depth, including the use of adaptive optics and photoacoustics (delivering laser pulses to generate and then detect ultrasonic emission), but either the imaging depth improvement is marginal, or spatial resolution is far from the optical diffraction limit. In the context of coherent optical imaging, there have been three main approaches to address the detrimental effect of multiple light scattering. The first is to selectively detect ballistic photons either using temporal and/or coherence gating (detecting returning waves in a particular time frame).1 While the spatial resolution of this approach can be high, the imaging depth at which the diffraction-limited spatial resolution is guaranteed has so far been about a few scattering mean free paths (MFPs, ls). The second approach is to use those waves scattered multiple times at small deflection angles so that the overall propagation direction is maintained.2 The imaging depth of this intermediate approach is better than the first, but the degradation of spatial resolution is inevitable. The third approach is to exploit multiple scattered waves in full. An example is where—on the basis of photon diffusion theory3—multiple scattered waves have enabled imaging depths of a few centimeters, but with limited spatial resolution of a few millimeters. Another example is the use of correlation of speckled waves generated by multiple light scattering,4 but these have been of limited use for imaging targets embedded within a scattering medium.

In response to these challenges, we have developed a microscopic imaging method that achieves full optical resolution when visualizing objects hidden inside a thick scattering medium.5 We extracted collectively the so-called single scattered waves—those scattered only a single time by the target object, and which retain object information—from the background of strong multiple scattered waves. For this purpose, we made measurements of the time-gated spatial input-output response of the scattering medium and made use of the in-plane momentum conservation property of the single scattered wave. Using what we term ‘collective accumulation of single scattering’ (CASS) microscopy, we achieved spatial resolution of 1.5μm, close to the diffraction limit resolution of 1.22μm, for a target embedded more than 1mm below the surface. This depth corresponds to about 11.5 ls, in which the single scattered waves are attenuated by more than 10 billion times. This is the highest imaging depth demonstrated so far at which full optical resolution imaging was guaranteed.

The experimental setup (see Figure 1) is based on a reflection-mode interferometric microscope in which a superluminescent laser diode (with wavelength 800nm) provides a low-coherence light source for temporal gating. We installed a spatial light modulator (SLM) to control the angle of illumination to the sample. An objective lens (0.4NA) delivered the incident wave to the sample plane. The same lens captured the reflected wave from the sample and subsequently delivered it to the camera. The laser output, reflected off the beam splitter, served as a reference wave and interfered with the reflected wave at the camera. We used a scanning mirror to control the optical path length of the reference wave, and in this way selectively recorded reflected waves with the same time-of-flight as that of the reference wave. We achieved this with a temporal resolution of 76fs: the coherence time of the light source. In the absence of multiple scattering, this temporal gating corresponds to a depth resolution of about 11.4μm. We used a diffraction grating to set the propagation direction of the reference wave oblique relative to the optical axis, which is necessary to obtain a complex field map (both the phase and amplitude maps) of the reflected waves.

For a target embedded within a scattering medium, we matched the focal plane of the objective lens with the target depth set by the temporal gating. We then took complex field maps of the reflected waves for 2500 different angles of illumination implemented by the SLM. Using this set of images, we identified those waves that preserve in-plane momentum and used them to reconstruct object images: see Figure 2(c). As a point of reference, we displayed individual time-gated images—see Figure 2(a)—and angular compounding images—see Figure 2(b)—which are the summation of the intensity maps from the 2500 complex field maps. This angular compounding is a conventional method used to suppress the effect of multiple scattering.6 Individual time-gated images were unable to visualize fine details of a US Air Force target even at a depth of 1.60 ls. With an increase in thickness, the angular compounding method could cope with the effect of multiple scattering to a certain extent, but revealed the fine details only up to a depth of about 7ls. In contrast, CASS microscopy produced a sharp resolution at up to 11.5 ls, a thickness comparable to approximately 1mm of biological tissue. 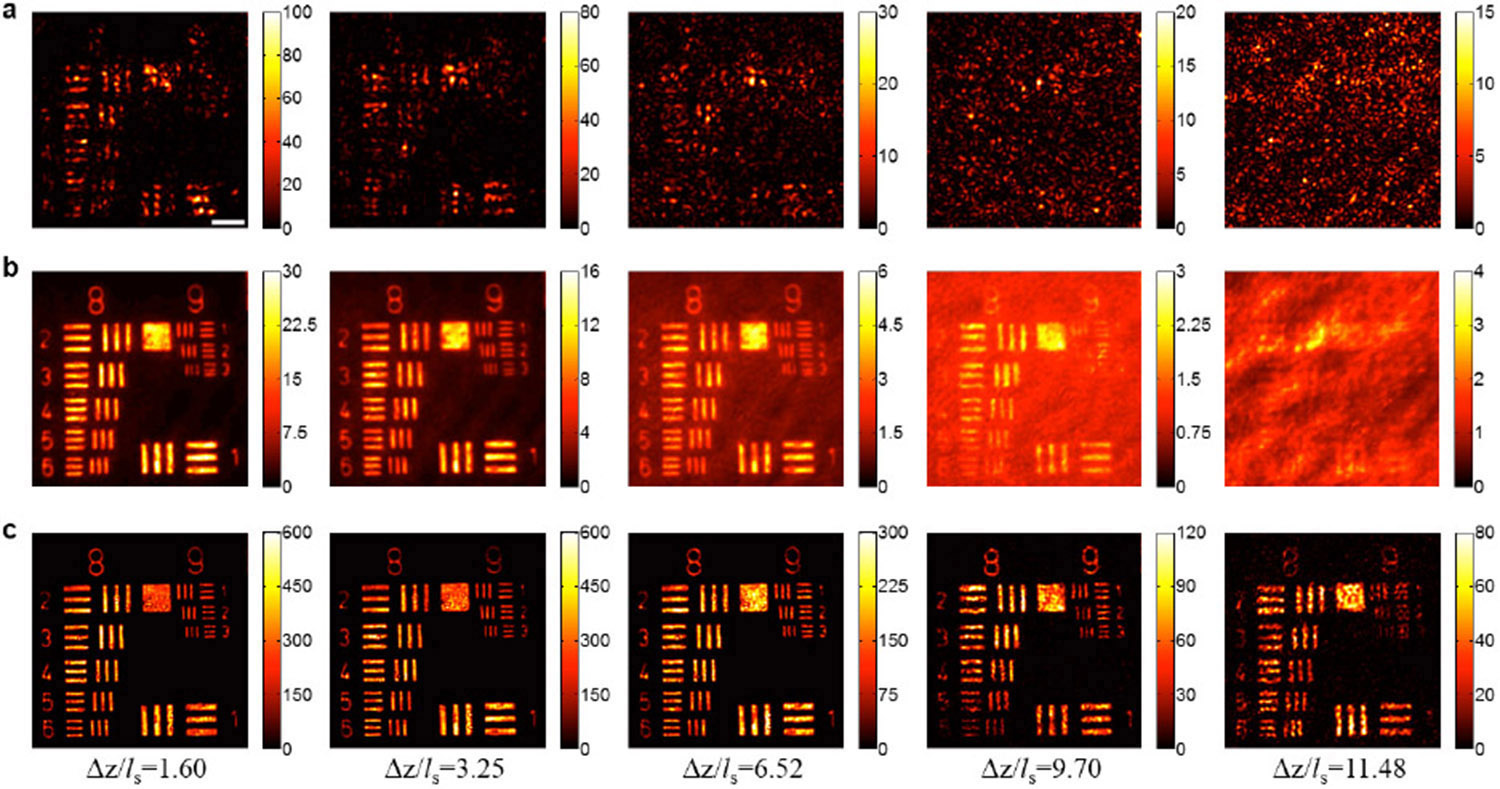 To summarize, we have developed a high-resolution optical imaging method that achieves an unprecedented target depth, and potentially broadens the scope of optical microscopy in vivo. Using our technique, it might be possible in future to visualize the detailed subcellular structures under the tissue surface, which may lead to earlier and more accurate disease diagnosis. In addition, the ability to distinguish single and multiple scattered waves will open a new avenue to studying the physics of light interaction with complex media.

We are currently streamlining our approach to speed up measurement times, with the aim of using the technique in biological and biomedical applications. In addition, we are exploring ways to make use of deterministic multiple scattered waves for high-resolution imaging.

Wonshik Choi received his BS, MS, and PhD in physics at Seoul National University. He then assumed a postdoctoral position there, and at Massachusetts Institute of Technology, before becoming an associate professor in the Department of Physics at Korea University. He is an associate editor at Biomedical Optics Express.

Sungsam Kang received his BS and PhD in physics at Seoul National University. He is currently a postdoctoral fellow in the Department of Physics at Korea University.

Seungwon Jeong is a PhD candidate in physics.