Manufacturing with pulsed-laser systems has been the focus of a great deal of attention in recent years. The approach offers the key advantages of being fast, flexible, and inexpensive. Additionally, the prospect of using laser-based manufacturing in space for the production of crucial engine- and aircraft-related parts (via 3D laser printing) has been discussed. However, although laser machining is mostly employed for the production of micron-scale objects, it may also be useful for the fabrication of large-area optically active nanopatterned surfaces using laser-interference-assisted ablation (holographic laser ablation).1, 2

In laser ablation, material is removed from a solid surface by irradiation with a laser beam. Instead of using a focused laser beam (which produces micron-scale features), our technique implements laser-interference patterns to ablate surfaces and produce interesting nanoscale features. Figure 1(a) shows a schematic diagram of our single-step rapid holographic-recording technique. A pulsed laser beam irradiates the thin semi-absorbing material used as a glass-substrate coating. This beam passes through the sample and is reflected back from the mirror below. Interference then occurs between the two laser beams traveling in opposite directions, resulting in an interference pattern that ablates a well-ordered grating onto the surface. 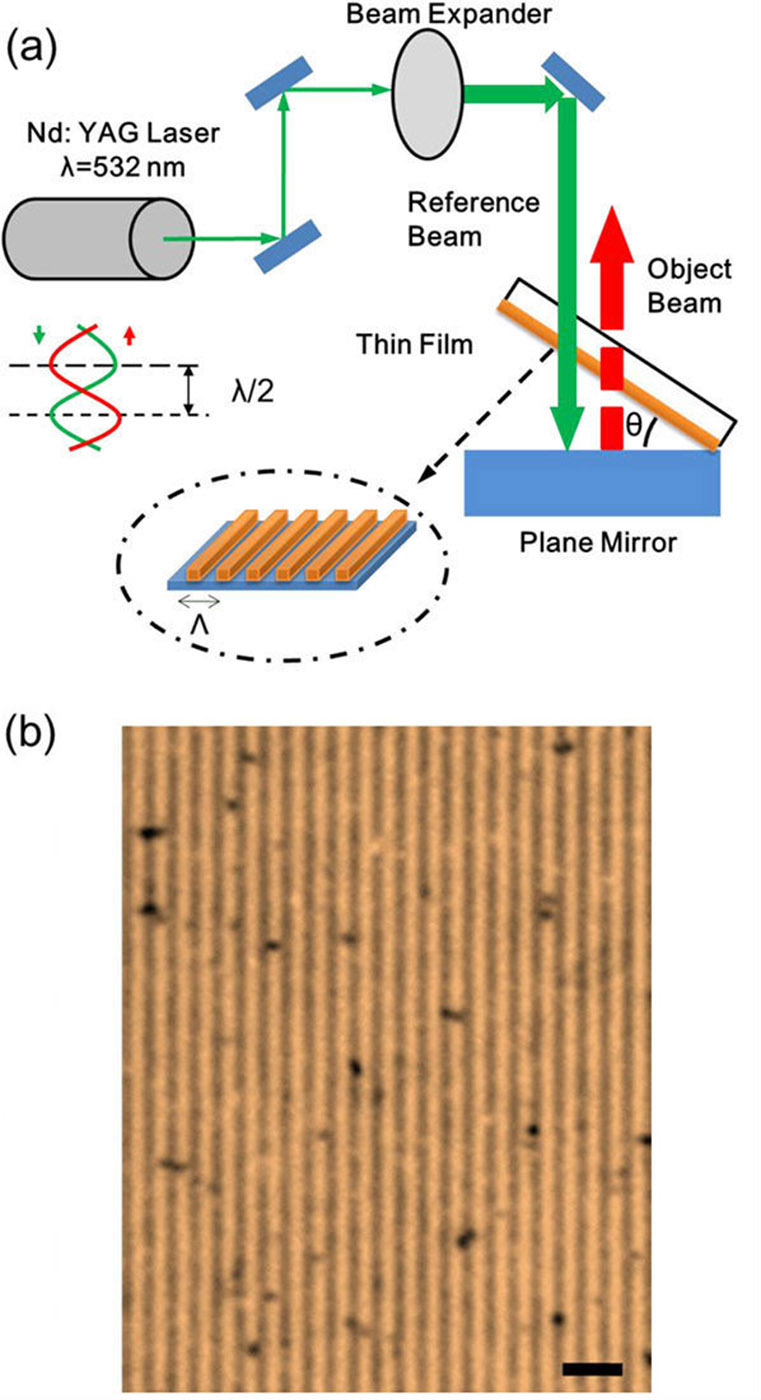 Figure 1. Fabrication of holograms through nanosecond-laser interference. (a) Schematic of the surface-hologram recording setup. A neodymium-doped yttrium-aluminum-garnet (Nd:YAG) pulsed laser beam with a wavelength (λ) of 532nm and a peak power of 350mJ travels through the beam expander and is reflected back by a plane mirror. θ: Tilt angle. (b) Microscope image of a gold surface grating fabricated using this technique. Scale bar =2μm.

The period of the grating is determined by the incident wavelength (λ) and tilt angle (θ) of the sample with respect to normal incidence. The constructive interference is produced at intervals of λ/2, showing the effect of a stationary wave. Figure 1(b) shows a microscope image of the surface grating sample ablated at θ=20°. We measured the periodicity to be 820nm.

This method is both flexible and fast compared with traditional laser-ablation techniques. By simply changing θ, the periodicity of gratings can be tailored and a variety of materials can be patterned. The fabricated gratings have a feature size comparable to the wavelength of visible light and therefore show strong diffraction effects, causing them to appear colorful.3–5 This feature makes them suitable for use as security holograms.6

Our technique is much faster and more economically efficient than conventional nanofabrication methods (e.g., electron beam lithography and photolithography).7 The process is also simpler compared with direct laser interference patterning, in which a single pulsed beam is divided using beam splitters and then recombined to produce holograms and nanopatterns.8 This approach requires precise alignment of various laser beams and suffers from low light intensity after beam splitting. Our method, on the other hand, uses a single-pulsed laser beam for the rapid printing of nanopattern/holograms on flat or curved surfaces.

We have also demonstrated that this method can be used for printing 2D complex patterns, such as concentric arrays of rings. This capability makes the technique useful for the fabrication of optical devices such as Fresnel zone plates (FZPs), which consist of a concentric array of opaque and transparent rings.9, 10 Because FZP lenses are flat and lightweight, they are widely used for astronomical applications and in compact optical systems. However, fabrication of FZPs via conventional methods necessitates the use of many process steps, chemicals, and expensive equipment.11

Our holographic-laser-ablation method enables the production of ultra-thin FZPs within seconds. We used a single-pulsed laser beam, reflected from a concave mirror, to produce an interference pattern consisting of circular fringes: see Figure 2(a). As a result of this, hundreds of concentric nanoscale rings are imprinted onto the 4nm-thick gold coating. These rings act as Fresnel zones and contribute toward the focusing of light: see Figure 2(b) and (c). This new method could enable the mass production of flat lenses and the development of optical elements using a wide variety of materials (e.g., semiconductors or materials not compatible with conventional fabrication techniques) with geometries that are flat, curved, or of other arbitrary form. Although the method suffers from limitations in terms of precision and repeatability, these issues could be improved by using precise and controlled laser manufacturing setups. 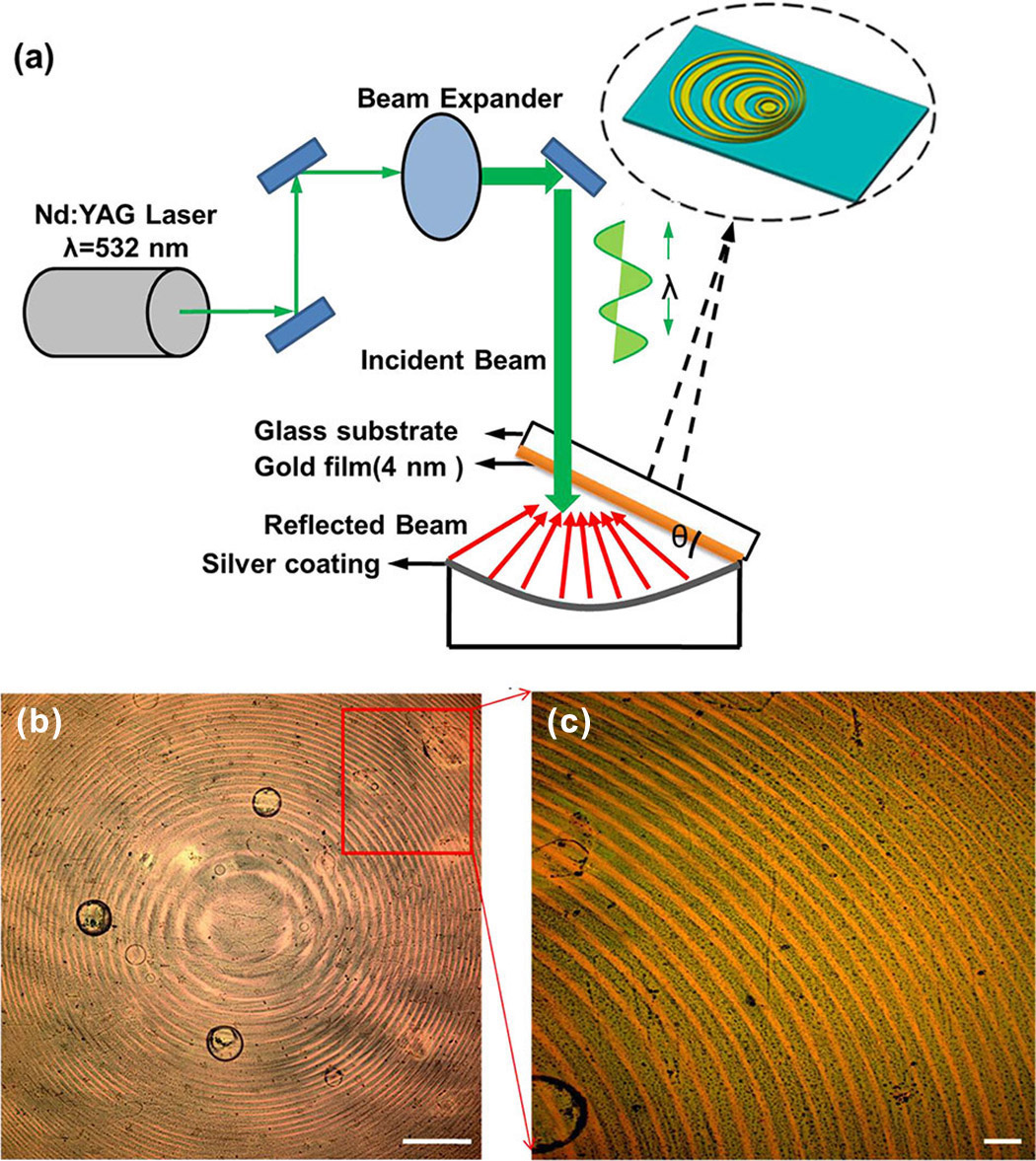 We have developed a technique based on holographic laser ablation for the fabrication of optical devices. We are now working to produce more sophisticated nanopatterns such as grids, triangular arrays, and 3D geometries using the same technique. We are also exploring further applications in areas such as data storage and biosensing.12, 13

The author would like to thank the Leverhulme Trust for the research funding.

Haider Butt is currently a lecturer (assistant professor). He was previously a Henslow Research Fellow at the University of Cambridge, where he received his PhD in April 2012. He has published over 40 peer-reviewed journal papers and has secured several prestigious research awards.

Ali K. Yetisen earned his PhD from the University of Cambridge and is now a postdoctoral fellow at Harvard Medical School. He holds over 30 journal publications. His research focuses on nanotechnology, photonics, commercialization, government policy, arts, and fashion.