Sentinel lymph node biopsy (SLNB) is a popular treatment choice for cancer patients because it is deemed less invasive than conventional axillary lymph node dissection. However, current SLNB procedures with radioactive tracing use Geiger counters and visual inspection with blue dyes, and are nonetheless ionizing, invasive, and not so accurate.1 By applying noninvasive, nonionizing, and accurate mapping techniques of sentinel lymph nodes (SLNs), we may minimize patients' associated side effects and, therefore, improve their quality of life. One approach to accurately map SLNs is photoacoustic imaging (PAI), a noninvasive, nonionizing, and high-resolution lymphatic tracing system that has been successfully applied in animals and breast cancer patients.2,3 However, conventional photoacoustic (PA) mapping of SLNs using organic dyes or inorganic nanomaterials suffers from either fast clearance times or long-term toxicity concerns.4–7 Furthermore, while multi-spectral parameters of nanoparticles have improved PAI specificities and sensitivities, this is not in the framework of PA lymphatic drawing.8 Therefore, PAI in combination with multi-color agents could be beneficial in delineating more complex lymphatics (in the head and neck, for example).9

Our team has recently developed all-organic nanoformulated compound derivatives naphthalocyanines (nanonaps) for dual-color PAI of lymphatics.10 Nanonaps have outstanding near-IR (NIR) absorption for deep tissue PAI with absorbance values of <1000. They also have tunable absorption peaks, and their organic nature leads to fewer safety concerns. In addition, they show spectral immobility at high and low concentrations. We successfully demarked two separate lymphatics in vivo using dual-color nanonaps and PAI. By exploiting the exceptional optical absorption of nanonaps in the NIR region, we were able to photoacoustically delineate deeply positioned SLNs (∼10mm). Therefore, noninvasive and nonionizing PAI enhanced with multi-spectral nanonaps might be a useful tool in clinical cancer staging practices.

We synthesized the 707nm nanonaps using 2,11,20,29,tetra-tert-butyl-2,3-naphthalocyanine, and the 860nm nanonaps using 5,9,14,18,23,27,32,36-octabutoxy,2,3-naphthalocyanine.11 First, we dropped the hydrophobic dyes, dissolved in methylene chloride, into a solution of the temperature-sensitive surfactant Pluronic F127. Following organic solvent evaporation, we lowered the temperature of the surfactant solution, causing the micelles to shift from micellar to unimeric form. This enabled subsequent removal of the majority of the surfactant, resulting in pure and concentrated nanonaps with ultrahigh NIR absorption. Figure 1 shows the optical and PA spectra of two nanonaps. The optical absorption peaks of the two are unambiguously resolved—see Figure 1(A), and their corresponding PA spectra agree well with the optical spectra—as shown in Figure 1(B). Our custom-made PAI system was able to detect the 707nm and 860nm nanonaps at the minimum concentrations of 133.6μg/Ml.12, 13

To demonstrate dual-color PA mapping of SLNs in vivo, we intradermally injected the 707nm and 860nm nanonaps into the forepaws of rats (17.1mg/mL and 100μL). Photographs of the PAI regions are shown in Figure 2(A, F). We obtained the control PA maximum amplitude projection (MAP) images before administration of each nanonap, respectively: see Figure 2(B, G). Axillary vascular networks are visible in the control images, but the lymphatic systems are not. Soon after injection of each nanonap, the lymphatic vessels and draining SLNs are clearly delineated: Figure 2(C) shows the 707nm nanonap, and Figure 2(H) the 860nm nanonap. The quantified PA image contrasts of SLNs are ∼32 and ∼34 in Figure 2(C) and 2(H), respectively, and the pseudo color represents the depth information. The depth-sensitive PA images—Figure 2(D) and 2(I)—processed along the yellow dotted lines in Figure 2(C) and 2(H) identify that the SLNs are positioned ∼2mm beneath the skin surface. We increased the imaging depth from 2mm to 10mm by layering chicken breast tissues atop the rats, and the SLNs were clearly visible in both cases: see Figure 2(E) and 2(J), respectively. Next, we sought to validate our in vivo imaging experiment results by performing ex vivo investigations. Figure 2(K) (inset photograph) shows the excised lymph nodes, and the quantified normalized spectral PA responses of L1 (black), L4 (green), and L7 (amber). These results agree well with the in vitro optical absorbance shown in Figure 1(A) and the spectral PA measurements shown in Figure 1(B) of both nanonaps. 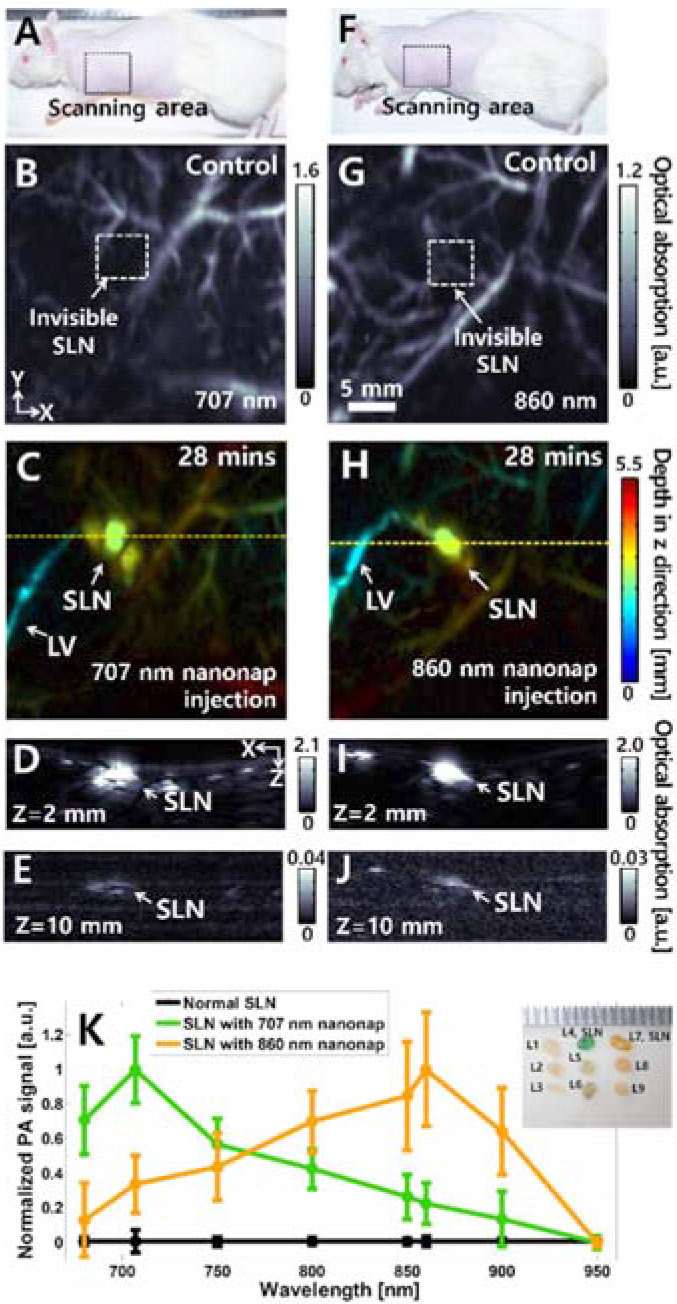 In conclusion, we successfully demonstrated simultaneous dual-color PAI of two distinct lymphatics in vivo. We synthesized all-organic multi-spectral nanonaps and proved these as outstanding PA-active tracers. As a next step, we will use a clinical PA imaging scanner to test our new methodology on axillary node staging in breast cancer patients. In addition, there is potential to further investigate multispectral, optochemically encoded, and bioconjugated nanonaps for the study of micrometastasis of cancer cells within lymphatic systems.

Chulhong Kim studied for his PhD and undertook postdoctoral training at Washington University in St. Louis under the supervision of Lihong V. Wang. He is currently an associate professor, and has published 71 peer-reviewed articles.