Extreme UV (EUV) lithography (i.e., at a wavelength, λ, of 13.4nm) projection optics designs have existed since the 1980s. These designs exploit the use of a shorter than 193.3nm (deep UV) wavelength in Abbe's formula. This formula predicts the diffraction-limited minimum resolvable feature size (0.5λ/NA, where NA stands for numerical aperture).1, 2 During the 1990s—with the use of four times reduction annular field designs and six rotationally symmetric aspheric mirrors—NAs were increased from 0.1 to 0.25. This allowed all orders of coma and distortion, as well as oblique spherical aberrations and high-order astigmatisms over a narrow radial field to be minimized.3 Nowadays, Moore's law continues to motivate the development of designs with even higher NAs, without increasing the number of relatively low-reflectivity EUV mirrors.

Zernike orthogonal polynomial surface and wavefront descriptions have long been used in the manufacture of projection optics for microlithography. This is because the optical tolerances are so small that trial-and-error cannot be used to achieve diffraction-limited wavefront corrections. No manufactured optical surface can be considered spherical (or rotationally symmetrical), but instead they have to be measured and systematically compensated. As wavefront tolerances continue to decrease, optical designs have evolved from all-spherical to those that include rotationally symmetric aspheric surfaces.

Although annular field optical designs are rotationally symmetrical, we find that a useful reduction in residual aberrations can be achieved by allowing small bilaterally symmetric Zernike departures from the base aspheres.4 This has enabled an increase in the NA (from 0.25 to 0.35) of six-mirror EUV microlithographic projection optics. The radial plane of such an annular field design is shown in Figure 1.5 This, however, is about the upper limit of NA. This bound is imposed by high-order aberrations and asymmetric pupil apodization at larger angles of incidence on the EUV mirror coatings. 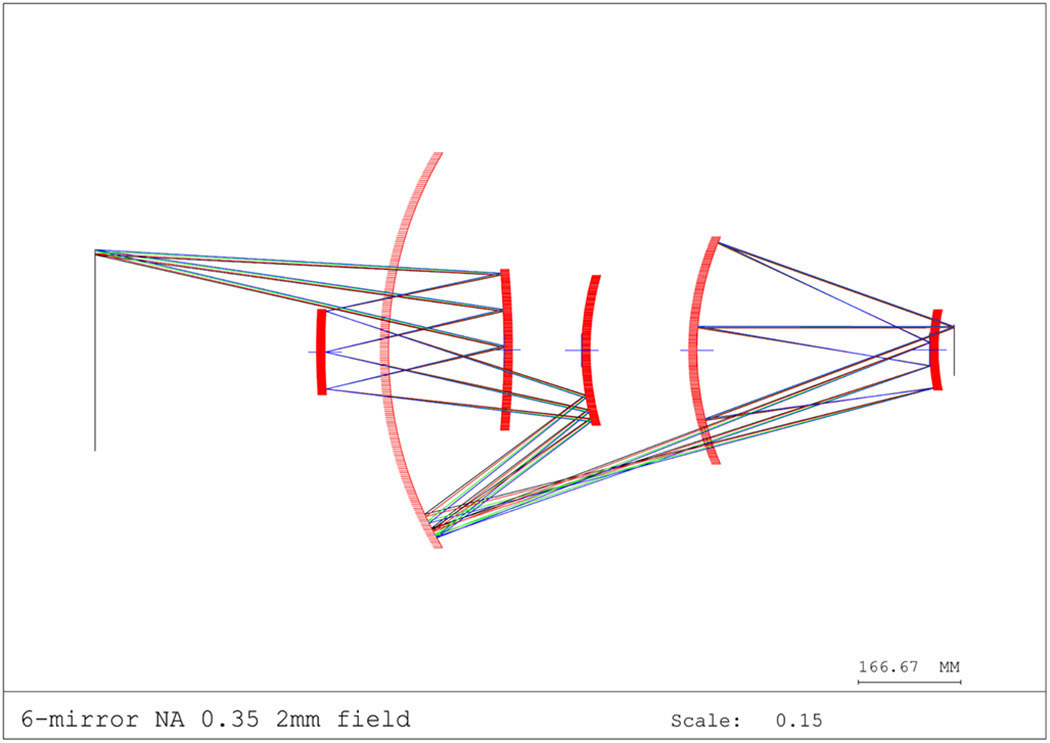 If a central obscuration is allowed in the telecentric high-NA space close to the wafer, the angles of incidence on the mirrors can be drastically reduced. A two-mirror anastigmat with a relatively small central obscuration is shown next to the wafer on the left of Figure 2.6,7 Four mirrors are added after an intermediate image (on the right of Figure 2). These mirrors are used to correct distortion, field curvature, and higher-order aberrations, including tangential and sagittal oblique spherical aberration and elliptical coma.8 Initially, the mirrors are allowed to obscure one another. The field and mirrors are rotationally symmetric, using only those of the first 37 fringe Zernike terms that correspond to different orders of spherical aberration, up to the 12th order.9 For the case illustrated in Figure 2, the root-mean-square (RMS) wavefront aberration is less than 32 milliwaves (or 0.43nm) at the edge of the 13mm radial field on the wafer. 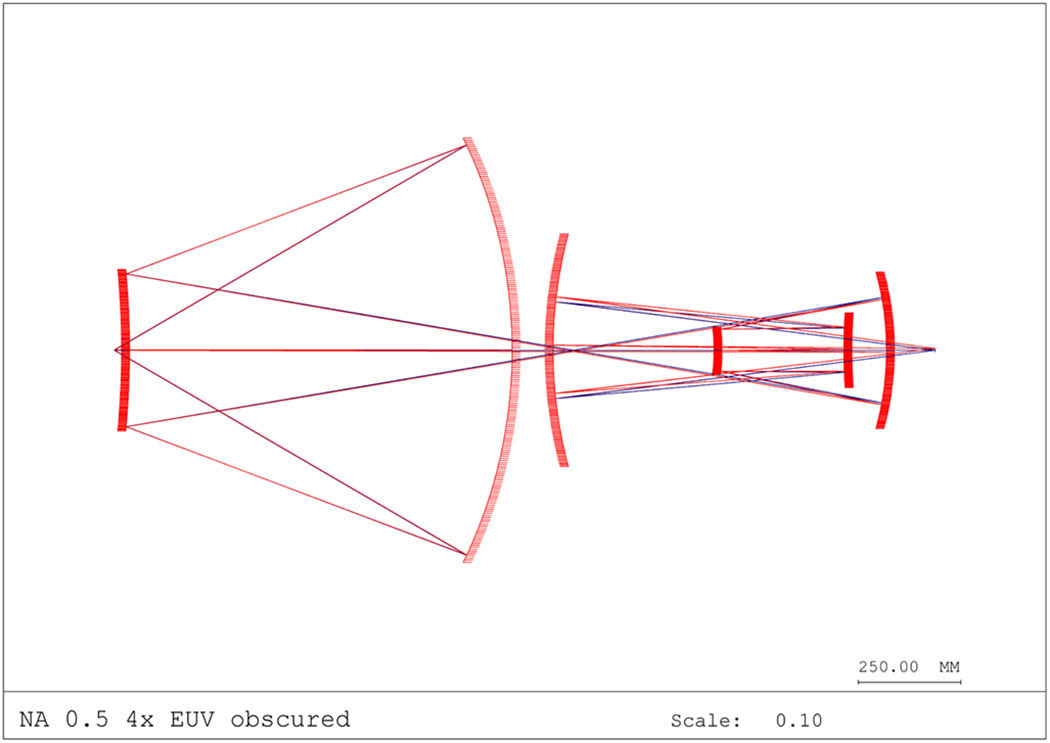 Figure 2. A rotationally symmetric obscured EUV projection optics design (NA of 0.5), which includes aspheric surfaces. A two-mirror anastigmat, with a relatively small central obscuration, is shown next to the wafer on the left. Four mirrors are included after an intermediate image (on the right).8

The next stage in our design process is to use an optimization procedure, which is based on the theory of aberration fields for general optical systems that have Zernike surfaces.10 In the optimization procedure, the mirrors are free to tilt and decenter, with variable rotational and bilaterally symmetric Zernike surface terms. We use edge-ray controls to guide the optimization toward the removal of obscuration in the four mirrors that are closest to the mask (shown on the right of Figure 3). The merit function also includes controls to minimize the angles of incidence, including the chief-ray angle at the mask. This process reduces image asymmetries that arise from relatively thick reflecting structures on the mask, which are almost constant across the linear field. Our design is constrained such that the object and image planes remain parallel to each other, which facilitates synchronized scanning of the mask and wafer. 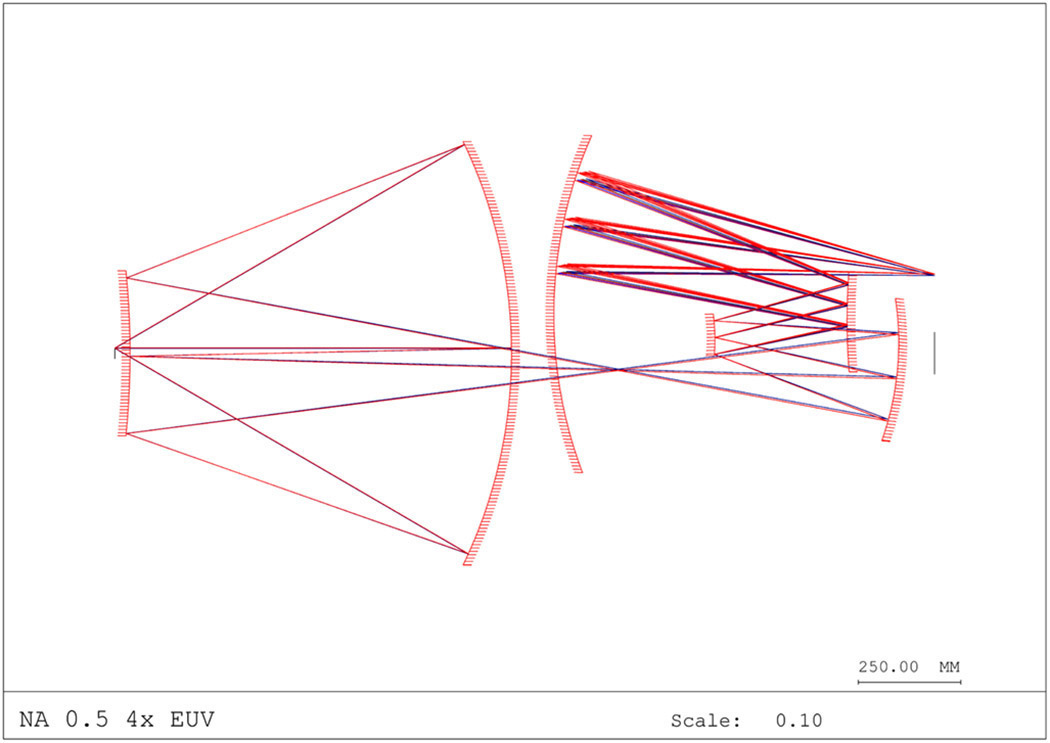 We have calculated residual wavefront aberrations of less than 14 milliwaves RMS (or about 0.19nm) across the field (±13mm) on the wafer that is perpendicular to the plane of Figure 3. We find it surprising that the Zernike bilaterally symmetric terms are so effective at correcting for the lack of rotational symmetry in the system. This is the case even for relatively large mirror tilts and decenters.

Zernike aberrations and surfaces have a long history in the field of precision optics metrology.11 In this work, we have used them in the design of freeform EUV projection optics with bilateral symmetry (when half the terms reduce to zero). Other than at the pupil, the apertures that are used—of optical surfaces over an extended field—are generally not circular. The orthogonality of individual Zernike terms is therefore lost, yet they provide a useful description of the freeform surface shape. For the foreseeable future, Moore's law will continue to drive the demand for EUV projection optics with NAs of more than 0.5 (and as close as possible to the theoretical limit of 1.0 in a vacuum). We expect to see the use of higher-order Zernike coefficients for this endeavor. Continued research, such as ours, into other freeform surface descriptions and different optical design concepts may also be used to reduce ray incidence angles on mirror multilayer coatings, especially for the reflecting mask. We also believe that developments in EUV light source and coating technology may allow even shorter wavelengths that will necessitate further reductions in residual aberrations.

David Williamson received his BSc and MSc in physics and optics at Imperial College London, UK. Since 1971 he has been an optical designer and moved into the field of microlithography in 1985 when he began working at Perkin-Elmer. In 2001 he became a Fellow at Nikon Research Corporation of America.