An integrated fluorescence spectroscopy approach can be used to examine the diffusion of molecular probes, protein folding processes, and several biochemical reactions.
11 December 2015
Ahmed A. Heikal

Living cells are inherently crowded with macromolecules, such as proteins, nucleic acids, actin filaments, and organelles. Such crowding has previously been reframed in a biological context.1, 2 It has been postulated that when high concentrations of macromolecules are in a confined environment, their impenetrable nature (i.e., excluded volume) and their chemical structures become determining factors in the associated thermodynamic and reaction kinetics of the system. Recent studies suggest that crowding plays an important role in regulating diffusion, protein folding, enzymatic activity, and biochemical reactions.2 Although phenomenological and empirical models exist, there are still several remaining challenges in describing the experimental data that is available for biological crowding on multiple spatiotemporal scales.

It is necessary to understand the role of macromolecular crowding so that a full understanding of cellular processes and underlying mechanisms for cell biology can be achieved. In this way, cell functions, survival, and diseases can be better understood. In the past, nuclear magnetic resonance (NMR) has been used to study protein-crowded environments and to investigate the translational and rotational diffusion of chymotrypsin inhibitor 2 in crowded environments.3 It was found that the heterogeneity of the amino acids in a given protein can lead to weak interactions and nonspecific binding with other crowding agents.3 Crowded environments can also be modeled as ensembles of different regions with distinct microviscosities that cause solutes to diffuse at multiple rates.4 From a diffusion perspective, the validity of the Stokes-Einstein model in crowded environments remains questionable. This is because of the scaling aspect of crowding and the spatiotemporal resolution of the methods used to study these processes.

In our work, we hypothesize that a crowded environment encompasses heterogeneous viscosity, buffer-like cavities, excluded volumes, weak interactions and associations (i.e., specific or nonspecific binding) based on the chemical structure and size of the crowding agents, as well as the molecular probe (see Figure 1). We argue that integrated time-resolved fluorescence anisotropy and fluorescence correlation spectroscopy (FCS) methods are the most suitable tools for distinguishing between association, confinement, and heterogeneous viscosity in crowded environments. This is true for specific spatiotemporal resolutions and molecular sensitivities. 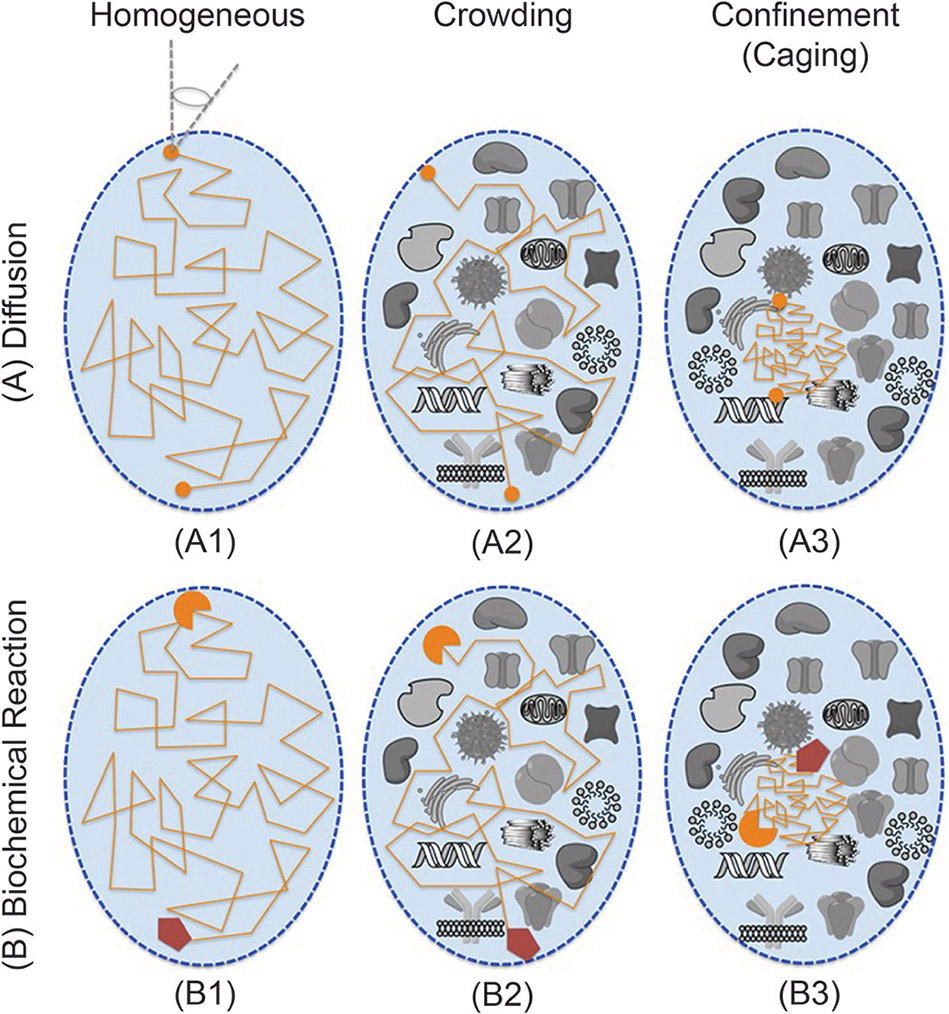 On picosecond to nanosecond timescales, molecular rotation can be monitored to obtain a snapshot of an existing species (e.g., monomers or oligomers between the molecular probe and crowding agents) in a buffer-like environment. Transient associations caused by weak interactions can be detected from different rotational times in a multi-exponential anisotropy decay. The translational diffusion of monomers, oligomers, and/or the cage (defined by the surrounding crowding agents) can be frozen on these fast (i.e., picosecond to nanosecond) timescales: see Figure 1(A).

On microsecond to second timescales, and at the single-molecule level, however, we find that FCS is best suited for translational diffusion studies of monomers and oligomers (even with transient associations). These are shown in Figure 1(A) as random walk trajectories. At high concentrations of the crowding agents, the molecular probes are likely to be confined in cage-like structures. This is because of the excluded volumes that are occupied by these hard-sphere agents. Although monomeric molecules are likely to diffuse in buffer-like cavities, the apparent diffusion coefficients will probably be much slower because of confinement. As such, the cage movement is likely to be much slower than the timescales that are involved with FCS and can therefore be probed using other methods. We propose that the integration of fluorescence spectroscopy methods for crowding investigations would complement NMR studies. Integrated fluorescence methods thus extend spatial and temporal resolution, as well as molecular sensitivity, as ways to elucidate the length scaling of macromolecular crowding.

The effects of macromolecular crowding on biochemical reaction kinetics are conceptually complicated. The phenomenological reaction rate constant between two mobile reactants in a crowded environment depends on their diffusion coefficient. The hydrodynamic radius, microviscosity, and confinement—see Figure 1(B2)—will cause diffusion to slow. On the other hand, the reaction rate constant can increase if the reactants are confined in a cage that is made of the crowding agents at high concentration, as illustrated in Figure 1(B3). We predict that comparative studies of multiscale diffusion processes—see Figure 1(A)—and biochemical reactions—see Figure 1(B)—in homogeneous (e.g., glycerol-enriched buffer) and heterogeneous (e.g., macromolecular crowding) solutions would allow a full investigation into the role of crowding on these molecular processes.

In our recent work, we have studied the effects of macromolecular crowding—both synthetic and protein-induced—on the rotational and translational diffusion of a small fluorescence probe (rhodamine green).5 To test our hypothesis, we used integrated, quantitative, and noninvasive fluorescence spectroscopy for our diffusion, biochemical reaction, and protein folding studies in both biomimetic crowding and cellular environments. We used variable concentrations (0–300g/L) of synthetic macromolecules (Ficoll-70) and proteins (bovine serum albumin and ovalbumin) to create the biomimetic crowded environment. As a control, we conducted similar measurements in a homogeneous environment that was made of phosphate-buffered saline and different concentrations of glycerol at room temperature. Our results provide new insights into the effects of crowding on multiscale diffusion, nonspecific binding, and the local heterogeneity of microviscosity that are experienced by a small fluorophore. We can thus make meaningful comparisons with other spectroscopic techniques.

In conclusion, we have proposed an integrated fluorescence spectroscopy approach to study the effects of macromolecular crowding in biological contexts. In our approach, we use time-resolved fluorescence anisotropy and FCS methods to monitor molecular rotational and translational diffusion processes that occur on different timescales. We are currently investigating how macromolecular crowding (using both polymers and proteins as crowding agents) can affect nicotinamide adenine dinucleotide–deyhdrogenase reaction kinetics.6 We are also studying protein folding with the use of our integrated time-resolved fluorescence anisotropy and FCS method.

Ahmed A. Heikal is a professor of physical chemistry and biophysics. He obtained his PhD in applied physics from the California Institute of Technology. He subsequently held a postdoctoral position at Cornell University and an associate professorship in bioengineering at the Pennsylvania State University.