East Asia has the highest concentration of anthropogenic aerosols in the world. This region is also unique because its natural dust sources are located close to urban and industrial areas. To monitor aerosols in East Asia, continuous observations are conducted from 20 locations of the Asian Dust and Aerosol Lidar Observation Network (AD-Net). This lidar network is the East Asian component of the Global Atmosphere Watch (GAW) Aerosol Lidar Observation Network,1 which is part of the World Meteorological Organization's GAW program. Data from AD-Net is used in a variety of research studies. These include investigations of Asian dust and regional air pollution (e.g., validation and assimilation of chemical transport models, aerosol climatology, as well as epidemiological studies into the effects of Asian dust and air pollution on human health).

The continuous aerosol observations at each of the 20 AD-Net locations are obtained from ground-based polarization-sensitive lidar instruments. These include a multi-wavelength high-spectral-resolution and Raman lidar, and three multi-wavelength Raman lidar instruments. The AD-Net data is processed in close to real time and is published on the AD-Net website.2 The operational lidar network was established in 2001 with three stations, one each in Tsukuba and Nagasaki (Japan), as well as one in in Beijing (China). The number of stations subsequently increased with the incorporation of various research programs and international cooperation programs. A map of the current AD-Net lidar sites is shown in Figure 1. 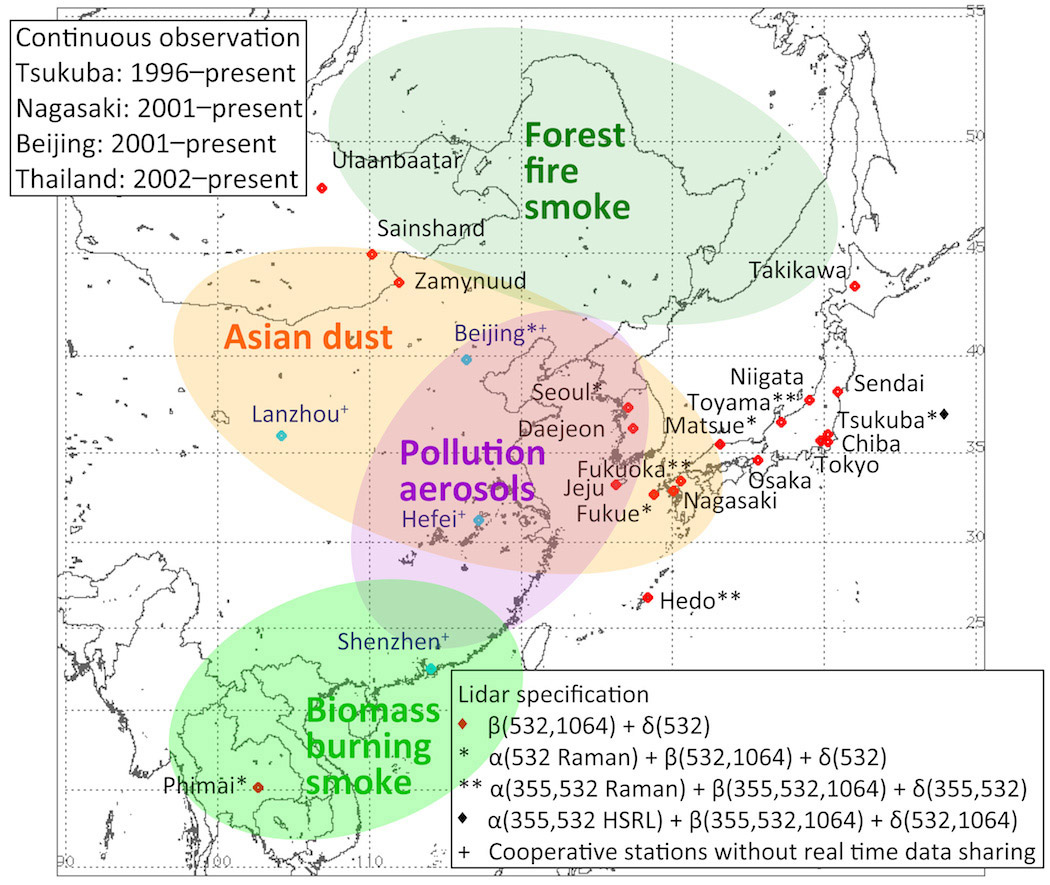 The standard lidar system at one of our AD-Net stations is a two-wavelength (1064 and 532nm) polarization-sensitive (532nm) Mie-scattering instrument. We developed a data analysis method—in which we use the depolarization ratio—to separate the extinction coefficients for non-spherical (mostly Asian dust) and spherical (mostly air pollution) aerosols. Although this method is based on a simple assumption (i.e., that there is external mixing of the two aerosol types), it can be useful for efficiently separating the distributions of the Asian dust and air pollution aerosols. In the standard AD-Net data product, we provide the extinction coefficient estimates for the non-spherical and spherical aerosols, as well as the attenuated backscattering coefficients and the volume depolarization ratio (see Figure 2). To date, the non-spherical and spherical aerosol extinction coefficients have been used in Asian dust data assimilation,3 climatology studies of air pollution aerosols,4 and in epidemiological studies.5 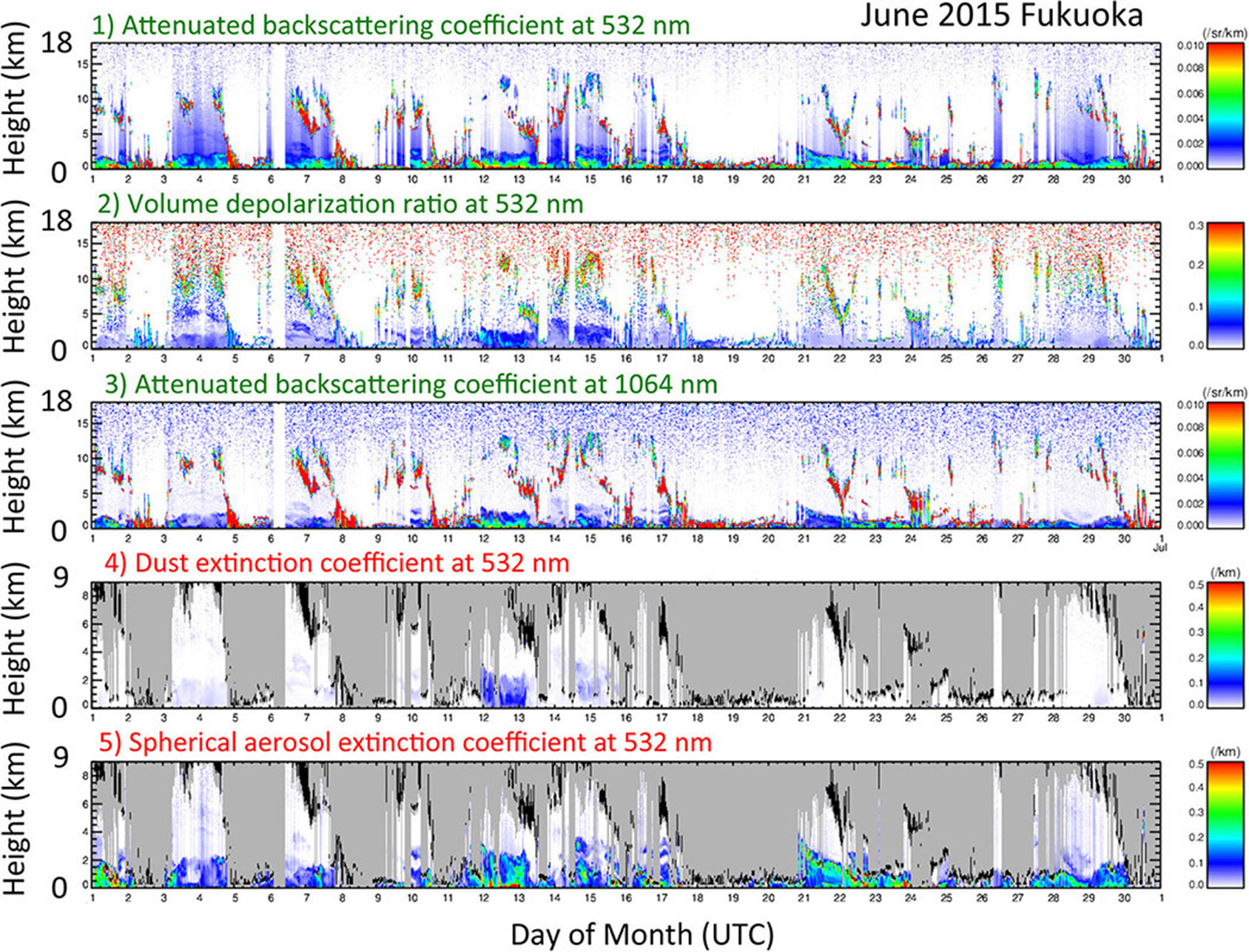 So that more quantitative analyses of aerosols can be made, we have added receivers for nitrogen Raman scattering (at 607nm) to the lidar instruments at the primary AD-Net stations. In addition, we developed multi-wavelength lidar systems. The three-wavelength Mie, high-spectral-resolution (HSR), and Raman lidar systems that we operate at the National Institute for Environmental Studies in Tsukuba, Japan, are depicted in Figure 3. Continuous observation data, obtained from this station, is presented in Figure 4. This station's practical hybrid HSR-Raman lidar system can be used to make observations during both the day and night. When we obtain a dataset, we measure the extinction coefficient using the HSR lidar method at 532nm and the Raman lidar method at 355nm. 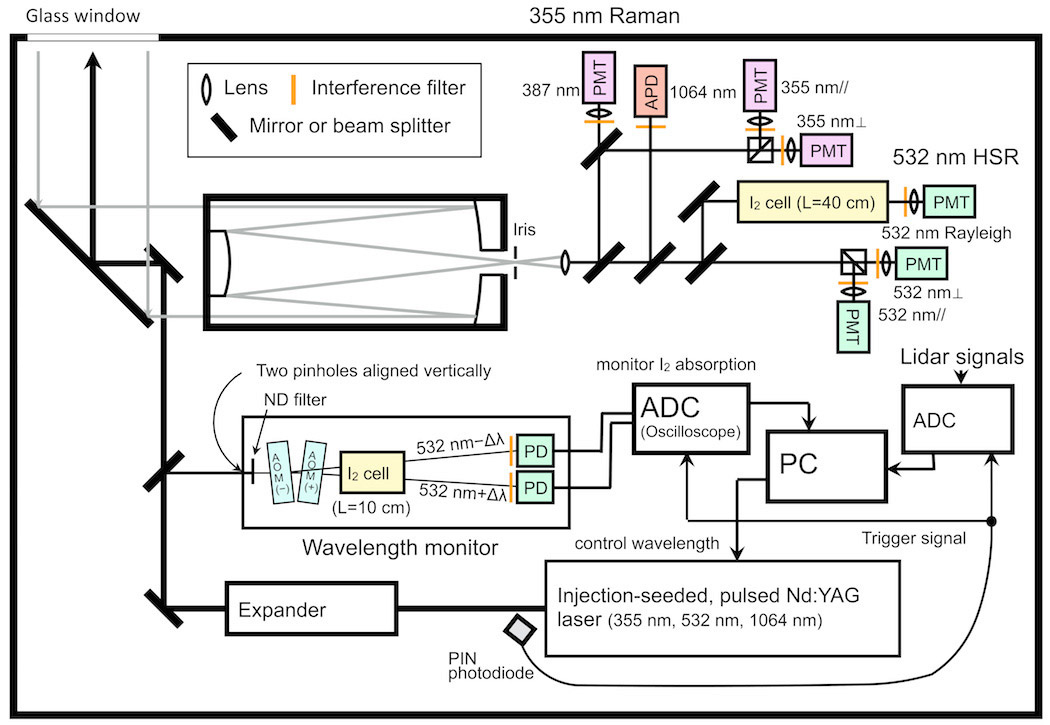 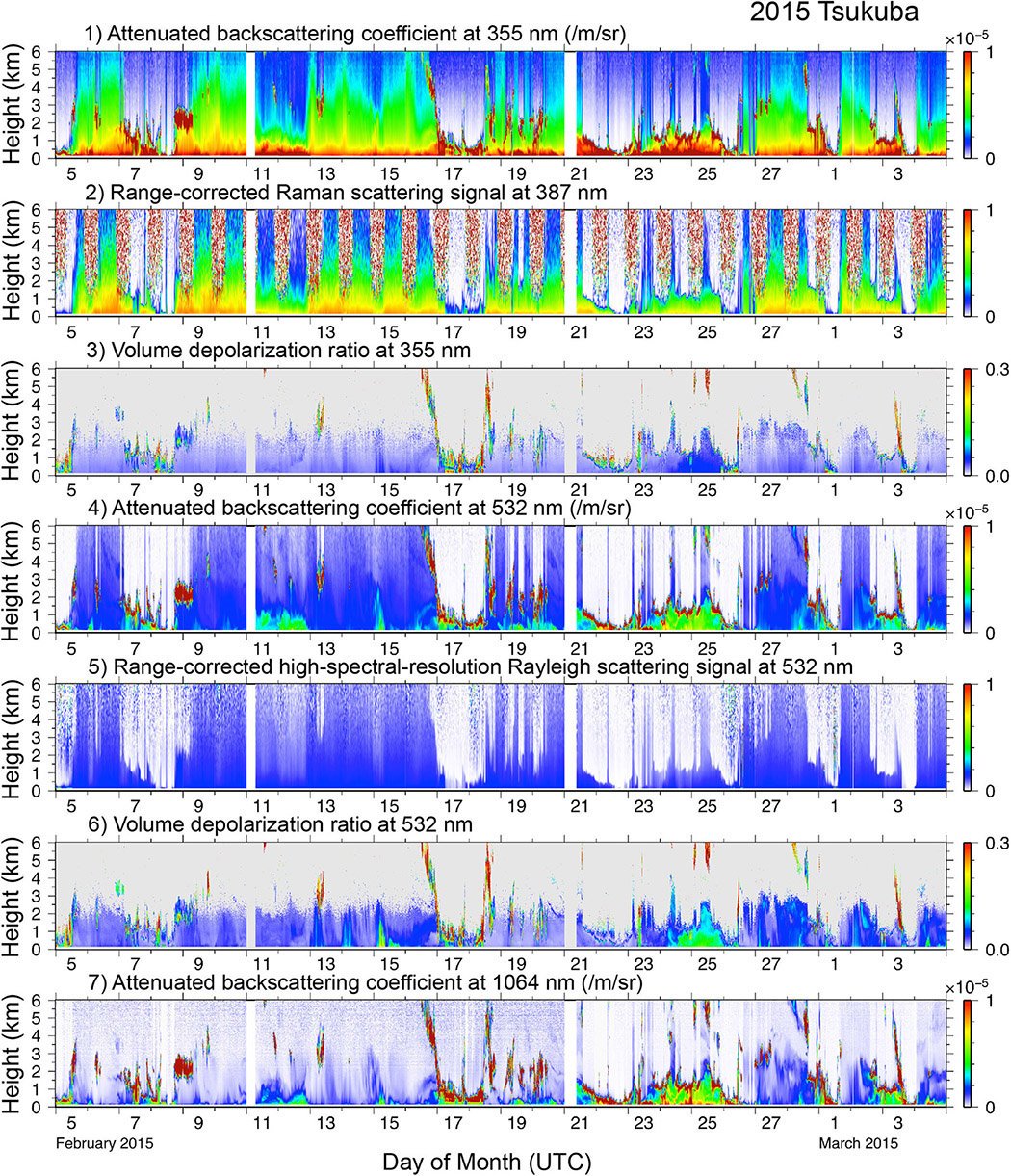 Concurrently with the lidar development, we developed new data analysis methods for multi-parameter lidars.6 We based these methods on ‘aerosol component analysis,’ in which the observed parameters are described as an external mixture of the optically defined aerosol components. These components include weak-absorption fine particles (e.g., sulfates), weak-absorption coarse particles (e.g., sea salt), strong-absorption fine particles (e.g., black carbon), and non-spherical particles (e.g., mineral dust). If the backscatter coefficient is measured at two wavelengths, and the extinction coefficient and depolarization ratio are measured at one or more wavelengths, we are able to derive the concentrations of the four aerosol components based on their optical models. If the number of independent parameters measured with the lidar is more than four, we can determine the size parameters of some of the aerosol components. We also studied a method in which we combine sky radiometer data with lidar data. In this process, we apply the aerosol component analysis method to the data analysis algorithm for the atmospheric lidar (ATLID) and the multi-spectral imager (MSI) payloads on the EarthCARE satellite.7 We are planning to conduct validation experiments using the ground-based, multi-parameter lidar, and sky radiometer networks (SKYNET and AERONET).

In addition, we are currently studying the assimilation of multi-parameter lidar data with a chemical transport model that can resolve aerosol compositions. In this data assimilation process, we calculate the optical parameters (measured by the lidars) from the modeled distributions of the aerosol chemical components. We make these calculations instead of applying aerosol component analysis to the lidar data. For this approach, we handle chemical components that have similar optical characteristics together. We then use the optical models that are consistent with those used in the aerosol component analysis to calculate the optical parameters measured by the lidars. Although we have previously observed internal mixing of dust and air pollution aerosols in a polarization particle counter (POPC) and AD-Net lidar study,8 we do not consider internal mixing of aerosols in our current chemical transport model.

The AD-Net lidar network has 20 stations distributed across East Asia. At present, simultaneous observations from multi-wavelength Raman lidars, in-situ aerosol chemical speciation analyzers, POPCs, multi-axis differential optical absorption spectrometers, and other instruments can be made at one of the network's stations. These datasets are used in studies for determining reasonable optical models for aerosol components. In these models, the optical parameters of the aerosols can be obtained concurrently with their mass compositions. In our future studies, we plan to develop our analysis technique to include internal aerosol mixing. Our ultimate objective for data assimilation is to characterize the source areas of the different aerosol compositions and to construct a reanalysis dataset of aerosol distributions across East Asia.