Advances in nanoscopic engineering have triggered a burgeoning need for technologies that can sensitively and accurately characterize novel nanostructured materials. In many cases, it is relevant to correlate the material properties to the morphological structure at the nanoscale, which requires measurement techniques that exhibit a very high spatial resolution. For nanostructured materials with interesting optical properties, this implies the availability of methods that can resolve light-matter interactions with nanoscopic precision. To achieve this, one successful route is to use near-field detection of optical excitations. This article focuses on an emerging imaging technique in this category, photoinduced force microscopy (PiFM), which offers images with optical contrast and genuine nanometer resolution.

Near-field optical microscopes circumvent the diffraction-limited resolution of conventional optical microscopes by exciting the sample or by detecting the ensuing optical response in the near field. Popular approaches for such detection include the use of a tapered waveguide (whose coupling aperture is smaller than the wavelength of light) or the use of a nanoantenna that can scatter near-field information to a far-field photodetector. In either case, we may determine the optical response of the sample by recording the amount of photons that strike a photosensitive detector. PiFM detects the optical signal by replacing the photodetector with a mechanical sensor in the form of a cantilever with a sharp atomic force microscopy (AFM) tip. The mechanical response of the cantilever is sensitive to optical interactions because of the presence of photoinduced forces felt by the tip. A polarizable tip experiences a force that is proportional to the gradient of the surrounding optical field. When we place the tip close to another polarizable object (the sample), it affects the local field, resulting in a change of the time-integrated force.

Since the so-called optical binding force between the tip and the sample is dependent on the polarizability of the sample material,1 measuring the photoinduced forces with a cantilevered tip offers a mechanism for probing the spectroscopic properties of the specimen. In principle, the attractive photoinduced forces between two polarizable nanoscopic objects are small, on the order of femtonewtons under typical illumination conditions. However, geometric field confinement and plasmonic enhancement at the apex of a gold-coated tip can boost the magnitude of the photoinduced force considerably, resulting in piconewton-level signals that are well above the detection sensitivity limit of a standard AFM.

We can acquire the spectroscopic information in PiFM at a very high spatial resolution because the relevant photoinduced forces are only prominent over tip-sample distances of a few nanometers. The steep axial distance-dependence of the photoinduced force implies that the detected force is very local, which also translates into a high resolution in the lateral dimension. The lateral imaging resolution in PiFM is on the order of 10nm or greater, even at ambient temperatures and pressures.

One of the most compelling demonstrations of the PiFM principle was by Wickramasinghe et al. in 2010.2 In their experiment, they used a continuous-wave laser source, amplitude-modulated at a frequency fm, to excite dye molecules deposited on a flat surface. They brought the tip into close proximity to the excited molecules, while the cantilever motion was modulated at a driving frequency f0. The presence of forces at the combination frequency f0+fm indicated that optical forces induced in the tip-sample junction were at play. When the researchers scanned the wavelength of the laser light source, the magnitude of the optical force changed, closely following the spectral response of the dye molecules. These experiments showed that it is possible to detect the optical absorptive properties of materials through the photoinduced force experienced by the tip (see Figure 1). 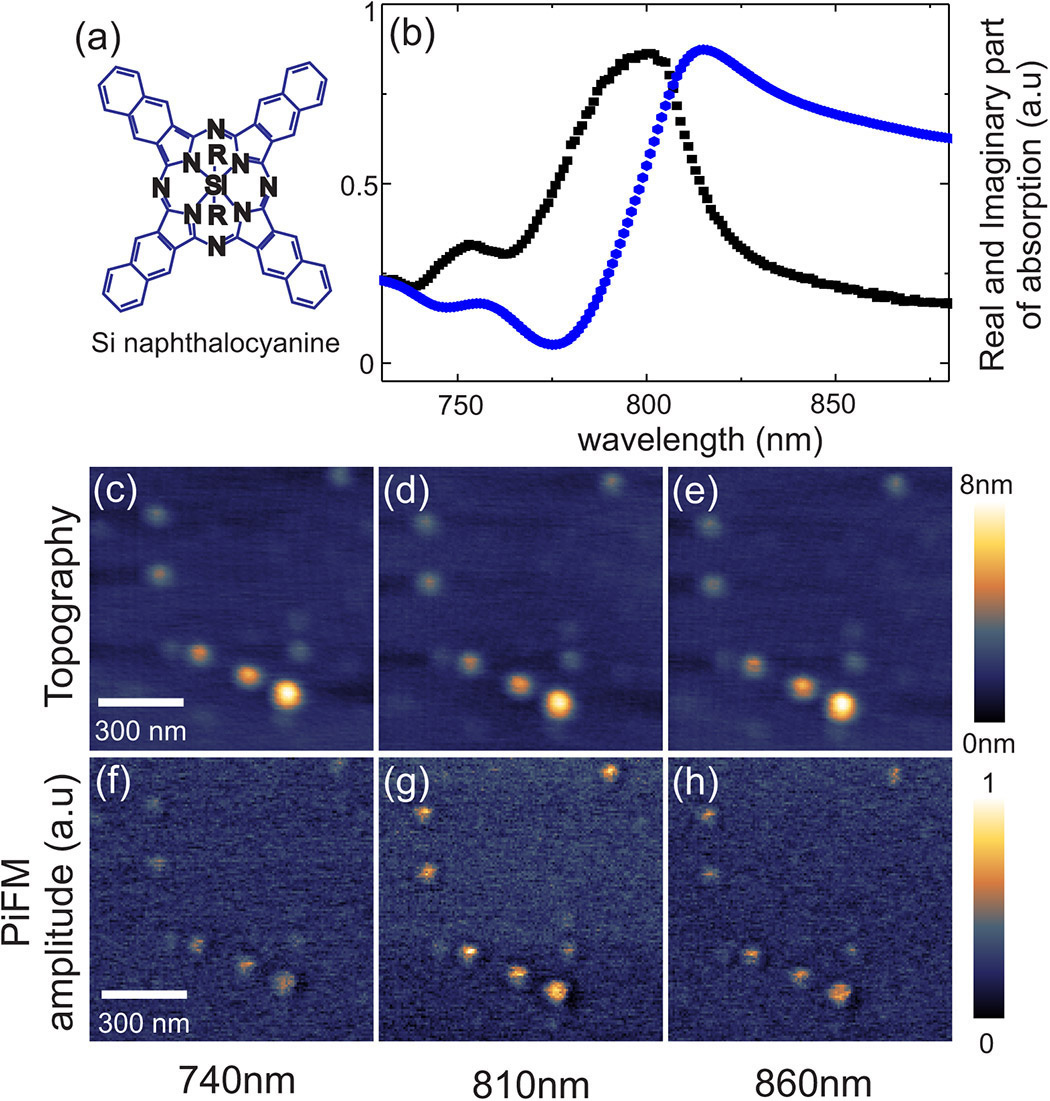 The PiF microscope offers imaging properties comparable to a near-field optical microscope, although the spatial resolution in PiFM is somewhat greater. There are other force-detection strategies that offer spectroscopic sensitivity at the nanoscale, most notably IR AFM, which is based on thermal expansion.3 However, the latter technique requires a direct contact between the tip and the sample, which enables detection of the modulated thermal expansion of the sample after photoexcitation. PiFM, meanwhile, is based on forces derived from the gradient of the electromagnetic field in the tip-sample junction, and therefore can be carried out in non-contact mode.4

The PiFM approach is not limited to detecting the linear optical response of materials at the nanoscale. We can also use it to detect forces due to the third-order polarization of a sample. Examples include PiFM based on stimulated Raman scattering5 and excited-state absorption. As with optical detection of the sample's nonlinear response, PiFM makes it possible to time-resolve the dynamics of excited molecules. For example, we conducted a pump-probe PiFM experiment where we recorded the excited-state decay dynamics from optically excited nano-clusters with a spatial resolution better than 10nm.6

PiFM is a relatively new technique, whose imaging properties continue to advance, but already the technique has proven useful in various nanoimaging applications. Examples include a version of the photoinduced force mapping technique that has enabled visualization of the electric field distributions in the focal plane of a high numerical aperture lens,7 and generating surface-enhanced fields near nanoantennas.8 Other applications include imaging of polymer films with chemical contrast at the nanoscale. In addition, there is speculation that the sensitivity of PiFM is sufficient for detection of individual molecules, opening up new possibilities for linear and nonlinear optical spectroscopy.

In short, PiFM is a new imaging technology based on force detection of optical excitations, which enables linear or nonlinear spectroscopic imaging at a spatial resolution of 10nm or better, with detection capabilities that approach single-molecule sensitivity. These imaging properties render the PiFM approach highly suitable for mapping the optical properties of materials at the nanoscale. Our future PiFM work focuses on spectroscopic imaging of protein complexes in membranes, nonlinear pump-probe spectroscopy of single molecules, and the development of vibrationally sensitive PiFM through IR excitation.

The authors are grateful for support from the National Science Foundation, Grant No. CHE-1414466.

Eric O. Potma is an associate professor in the Department of Chemistry. His research group is active in developing nonlinear optical imaging techniques for the purpose of interrogating biological tissues, nanostructured materials, and single molecules.

Junghoon Jahng is a PhD candidate in the Department of Physics and Astronomy. His research is focused on the quantitative analysis of photoinduced force microscopy using both theoretical and experimental methods.

Faezeh Tork Ladani is a PhD candidate in the Department of Electrical Engineering and Computer Sciences. Her research interests are electromagnetic theory, plasmonics, and atomic force microscopy.

Ryan Muhammad Khan is a graduate student in the Department of Chemistry. His graduate work focuses on the development and application of photoinduced force microscopy.