Over the past century, researchers have exploited energetic particles and much of the electromagnetic spectrum to acquire images that range in dimension from the interstellar to the atomic. To obtain these, they have focused particles or waves to a small spot to acquire information from the smallest region possible. For example, in a microscope, the extent of the focus defines the best achievable resolution, and one cannot focus beyond about half of the wavelength value that is used to image.1 Therefore, to achieve higher resolution, we must reduce the wavelength of the light or increase the energy of the particles. With light, the practical limit is UV, beyond which it is difficult to focus. To obtain a spatial resolution beyond about 250nm, we may turn to high-energy electrons, which can be focused using electric or magnetic fields. This has led to the proliferation of scanning electron- and transmission electron microscopes.

To probe the chemical makeup of an image (or the sample, which the image captures) we may take vibrational spectroscopy measurements using Raman spectroscopy (RS) or Fourier transform IR (FTIR) spectroscopy. For RS, we measure the vibrational energy state by detecting how much energy the incident light loses when it excites the vibrational motion of the sample.2 In FTIR spectroscopy, we measure the vibrational energy by detecting the wavelength of the light that is absorbed during resonant excitement of vibrational motion.3 Although Raman scattering typically occurs a million times less often than resonant absorption, Raman imaging has progressed further than FTIR because of advances in visible optics (scientific cameras and laser sources, for example). Nonetheless, recent developments in IR light sources and array detectors have led to FTIR imaging becoming gradually more popular.

Both Raman and FTIR imaging techniques are subject to focus limitation, and because of the wavelengths used can at best achieve spatial resolution of about 300nm and 5μm, respectively. To go beyond this limitation, we have combined both techniques with atomic force microscopy (AFM), which acquires the sample's topography by measuring the intermolecular force between a sharp tip (much sharper than the diffraction limit) and the sample surface.4, 5 By isolating and analyzing the light that scatters off the sharp AFM tip, we can obtain information about the sample region directly below the tip, on the order of about 20nm. When using Raman, the combined technique is called tip-enhanced Raman spectroscopy (TERS),6 and for FTIR, scattering scanning near-field optical microscopy (sSNOM).7 For TERS, there are few tips available that reliably enhance the near-field Raman scattering compared with far-field scattering, and this has held back widespread adoption of the technique, despite its promise. For sSNOM, the difficulty associated with isolating the near-field photons from the background photons mostly limits its use to samples with simple topography, such as 2D materials.

In photoinduced force microscopy (PiFM), the optically induced dipole exerts on the AFM tip a force that we can measure directly by the AFM system, simultaneous with topography.8 The force is induced by an interaction between the optically induced dipole and its mirror-image dipole in the metal-coated tip. This dipole-dipole force interaction is a strong function of the space between the tip and the sample, which is the basis for PiFM's exceptional spatial resolution, since the points far from the very apex of the tip contribute minimally to the measured signal. When we illuminate the sample at a wavelength that matches one of its vibrational energy states, the sample becomes strongly polarized, and the dipole-dipole force becomes strong enough that we can measure it using the AFM cantilever. This technique has an excellent signal-to-noise ratio, even on samples as thin as 2nm. By acquiring a PiFM signal as a function of wavelength, we acquire a spectrum similar to that of FTIR, but inverted. We found an excellent correlation between IR PiFM and FTIR spectra on several polymer systems that we studied. Figure 1 shows topography and spectral PiFM images at 1492 and 1732cm−1—corresponding to the absorption band for polystyrene (PS) and poly(methyl methacrylate) (PMMA), respectively—of a PS-PMMA block copolymer sample with a pitch of 40nm. Each polymer block has a width of about 20nm and is clearly resolved. No other analytical tools can acquire chemical-specific images on this type of sample with such a high level of spatial resolution. 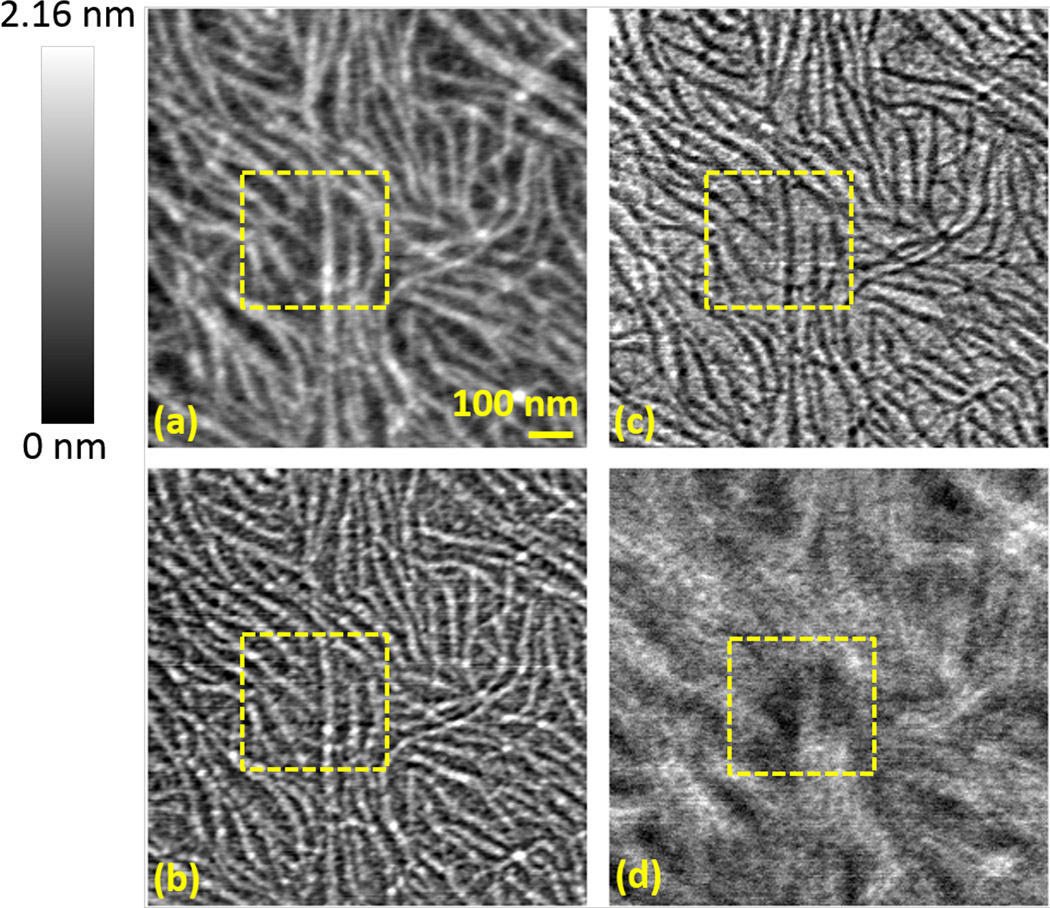 Almost as significant as the technical performance of PiFM is its robustness and repeatability compared with other tip-enhanced optical techniques. By eliminating the need for far-field collection of near-field generated photons, PiFM provides an easy-to-use AFM and nanoscale IR spectroscopy combination for true nanoscopy with chemical recognition.

Our future work includes the extension of the technique into liquid and gas environments, as well as vacuum. Additional work is also needed to design tips that would yield even higher (atomic) resolution. With concomitant improvements in lasers, PiFM has the potential to achieve science-fiction-like tasks, such as visualizing and identifying individual proteins and understanding their dynamic behavior in living cells.

We acknowledge the generous help of Block Engineering in loaning us the LaserTune tunable quantum cascade laser system. In addition, we thank Jinhui Tao and James J. De Yoreo for making the collagen sample available to us.

H. Kumar Wickramasinghe is the Henry Samueli Endowed Chair and chair of the Electronic Engineering and Computer Science Department. Previously, he spent 24 years at IBM's Watson Research Center, where he pioneered and commercialized several scanning probe microscopes, including the dynamic mode AFM and the scanning Kelvin probe force microscope.

Sung Park earned a PhD in applied physics from Stanford University, and a BA in physics from Pomona College. In 2011 he co-founded Molecular Vista with H. Kumar Wickramasinghe to provide tools for nanoscale imaging and chemical identification. He has 25 years of experience in R&D, engineering, marketing, and sales.