Bioprotonics: taking electrons out of bioelectronics

The quest for smaller and faster computing has mostly focused on controlling the flow of electrons and holes in nanoscale structures. In living systems, ionic and protonic currents (rather than electrons) affect physiological function, and therefore devices that can manipulate these currents offer exciting opportunities for bioelectronics.1 Examples are synapse-like memristors for neuromorphic computing,2 silicon nanowires for recording single cell potential,3 and organic field effect transistors for biological sensing.4, 5

In 2011, we developed the first prototype bioprotonic field effect transistor (H+-FET),6, 7 as shown in Figure 1(a). The source and drain in this device are made of palladium hydride (PdH), which transfers both holes (H+) and electrons. In a bioprotonic FET, the current of H+ between source and drain (IDS) is switched on or off with a gate voltage (VGS) in a way that is analogous to an electronic current in a semiconductor FET: see Figure 1(b). The H+-FET is about 5μm wide, roughly a twentieth the width of a human hair. Biopolymers maleic chitosan and proline chitosan transfer protons along the device. Maleic chitosan has an acidic functionality and preferentially transports H+(H+ type), while proline chitosan, with a basic functionality, preferentially transports hydroxide (OH− type). These H+-type and OH−-type biopolymers enable the development of complementary protonics with the same functioning principle as CMOS.8 In addition to bioprotonic transistors and H+-OH− diode-type rectifying junctions, we have also demonstrated protonic two-terminal memories with reconfigurable ‘ ON’ and ‘ OFF’ states.9 A potential advantage of these memories is that—when miniaturized to 20nm—they operate with only 30fJ of energy, which is smaller than the energy consumption of current CMOS memories.

Figure 1. Protonic device architecture and proton conductivity mechanism. (a) Two- and three-terminal devices with palladium hydride (PdHx) source and drain. PdHxis created by exposing palladium (Pd) metal to 5% hydrogen (H2) atmosphere. At this H2 concentration, the Pd absorbs H2 to form PdHxwith x=0.5. PdHxis kept in a 5% H2atmosphere throughout the measurements, and acts as a H+reservoir. The PdHx source and drain inject and sink protons into and from the proton wire according to the reversible reaction PdH↔Pd+H+e- going from left to right at the source, and from right to left at the drain. The PdHx source and drain are connected to external electronics that measure the electronic current to complete the circuit. (b) Plot of source and drain (IDS) as a function of gate voltage (VGS) for different drain-to-source voltage (VDS) (RH 75%) for a maleic chitosan H+ field effect transistor (FET) with PdHx contacts. Device dimensions: length 8.6μm, width 3.5μm, height 82nm. SiO2: Silicon dioxide. (Reproduced with permission from Deng et al.8)

Systems using H+ as charge carriers can be integrated with biological systems. Recently, we showed that it is possible to integrate these devices with enzymatic logic gates (see Figure 2).10 The gates are glucose dehydrogenase, which requires the presence of both glucose fuel and its co-factor nicotinamide adenine dinucleotide (NAD+) to function and produce H+. It therefore reduces solution pH, effectively serving as an enzymatic AND gate: see Figure 2(a). With our bioprotonic devices, we transduce proton signals from biochemical inputs into readable electronic currents: see Figure 2(b). The protonic current >0.1mA corresponds to a logic 1, while current <0.05mA corresponds to a logic 0. 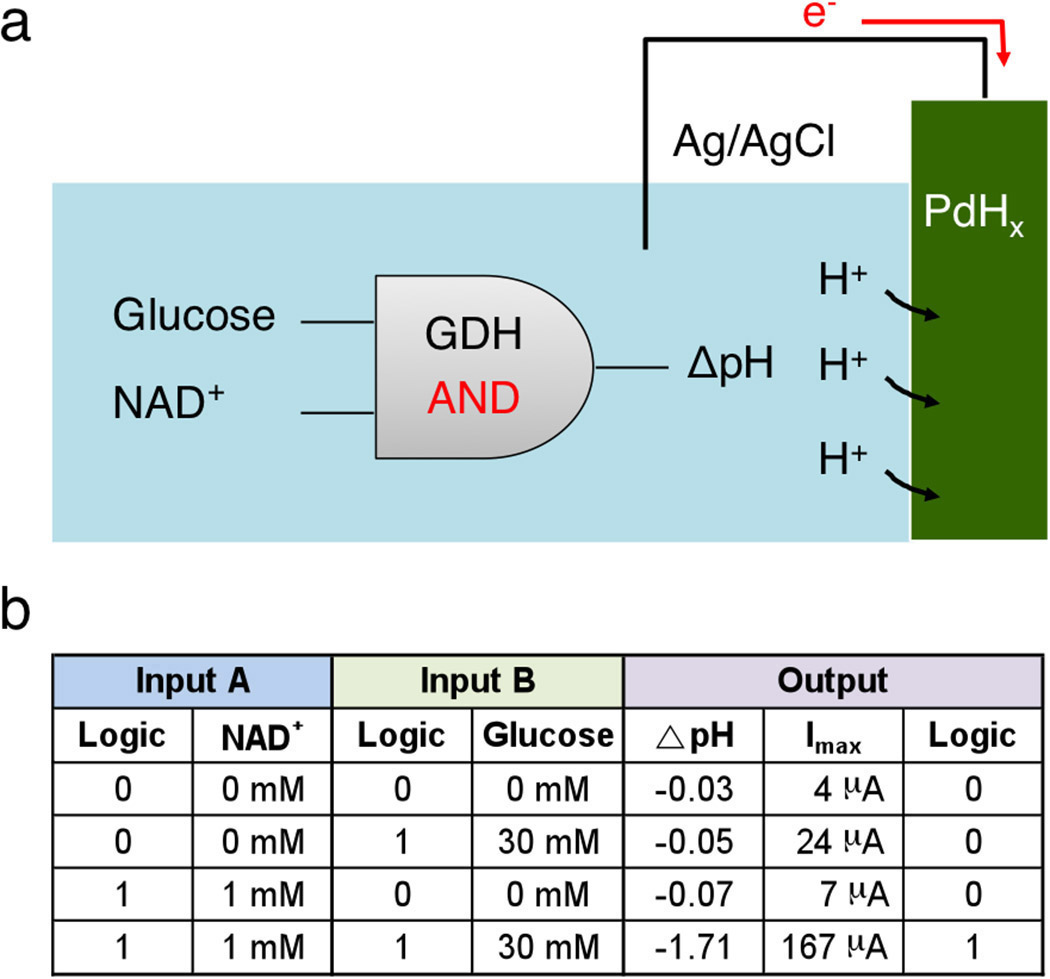 Figure 2. Enzyme logic. (a) Schematic of the proton-electron transducer. A PdH electrode is controlled by enzyme logic proton modulation. Logical proton modulation occurs by using glucose dehydrogenase (GDH) as an AND logic gate. The GDH enzyme reacts with nicotinamide adenine dinucleotide (NAD+) and glucose to produce the reduced form of NAD, NADH, and gluconic acid, lowering the electrolyte solution pH. The pH change acts as an ‘on-off’ switch that controls the PdH formation. (b) Truth table for GDH enzyme logic based on pH and current output with varying inputs such as input A (NAD+) and input B (glucose). An output of 1 indicates significant pH and current change (Imax). An output of 0 indicates no change in current. Ag/AgCl: Silver/silver chloride. (Reproduced with permission from Miyake et al.10)

In short, we have developed a suite of devices that control H+ and OH− charge carriers in a fashion that is analogous to electrons and holes in semiconductor devices. The source and drain for these is made from PdH metal, which enables flawless interfacing for proton transfer in solutions and biological systems. We have also demonstrated enzymatic logic gates. Our future work will focus on applying these approaches in biological phenomena where pH control is important, such as oxidative phosphorylation of adenosine triphosphate in mitochondria, and control of neuronal excitability.

This work was supported by a National Science Foundation CAREER Award (DMR 1150630) (bioprotonic transistors and memories) and by the US Department of Energy, Office of Science, Basic Energy Sciences, under award DE-SC00104414 (H+ transfer at PdH/water interface and enzyme logic). Author Takeo Miyake acknowledges a fellowship from the Japan Society for the Promotion of Science.

Marco Rolandi is an associate professor of electrical engineering at the University of California, Santa Cruz. His research focuses on micro- and nanobiological and bioinspired structures, their integration in biocompatible devices, and their translational applications. He pioneered bioprotonic field effect transistors.

Zahra Hemmatian is a postdoctoral scholar in Marco Rolandi's group, and is working on bioprotonic devices for bioinspired energy conversion. She obtained her MSc in electrochemistry at Isfahan University, Iran, and her MSc in polymer engineering at Rome La Sapienza University and Giulio Natta American-Italian center in Italy. She received her PhD in nanosciences and nanotechnology at the University of Bologna, Italy.

Takeo Miyake is a research scientist in Marco Rolandi's group. His research interests include bioprotonics, bioinspired engineering, interface science, and material science. He received his PhD in nanoscience and nanoengineering at Waseda University, and was selected for the young scientist program from the Japanese Society for the Promotion of Science. In 2009, he joined Tohoku University as an assistant professor in the Department of Bioengineering and Robotics.