According to the textbook definition, the eigenspace of a Hermitian operator always forms a complete basis, as shown schematically in Figure 1(a). In contrast, the question of which non-Hermitian operators have an eigenspace that does not form a complete basis is more complicated. The answer is: when there are exceptional points (EPs). EPs are singularities that are unique to non-Hermitian systems,1, 2 where two or more eigenvectors merge into one with the same complex eigenvalue: see Figure 1(b). Since their introduction into optics and photonics,3 EPs have given rise to many interesting and counterintuitive physical phenomena, including loss-induced transparency4 and unidirectional reflection.5 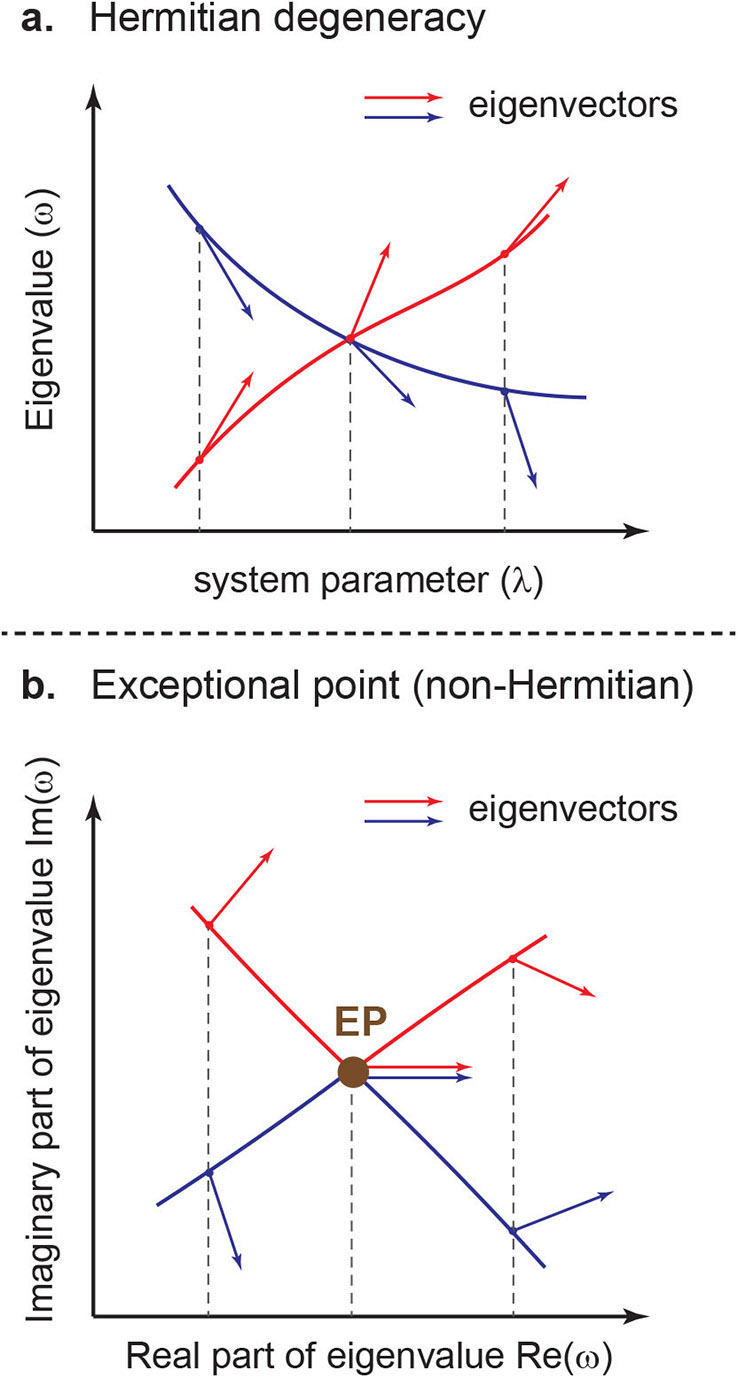 A seemingly unrelated phenomenon is the Dirac cone, which originated in high-energy and particle physics and has recently also become important in the physics of condensed matter and materials science. Its characteristic band structure comprises two conical bands that touch at a single point, as shown in Figure 2(a). This has been achieved in various systems, including single layers of carbon atoms (graphene), cold atoms in optical lattices, and coupled optical waveguide arrays, as well as, recently, via accidental degeneracy.6 In fact, Dirac cones and EPs are connected. It has been suggested3, 7,8 that in theory certain systems can deform a Dirac cone into a ring of EPs, or an ‘exceptional ring.’ However, an experimental demonstration of this process has not been achieved until now.9

A 2D photonic crystal10 is a Hermitian system, which is a closed system without gain or loss of energy. Here, we consider a photonic crystal consisting of a square lattice of airholes in a background with a high refractive index: see the inset of Figure 2(a). By varying the radii of the holes, we can obtain a Dirac cone by means of accidental degeneracy,6 as shown in Figure 2(a). However, if we consider a similar system—a 3D photonic crystal slab of finite thickness—this is not Hermitian, because the energy in the system can leak out by radiating toward the top or bottom of the slab: see the inset of Figure 2(b). Consequently, the dispersion of the system changes completely: the conical dispersion disappears, to be replaced by an exceptional ring, as shown in Figure 2(b). 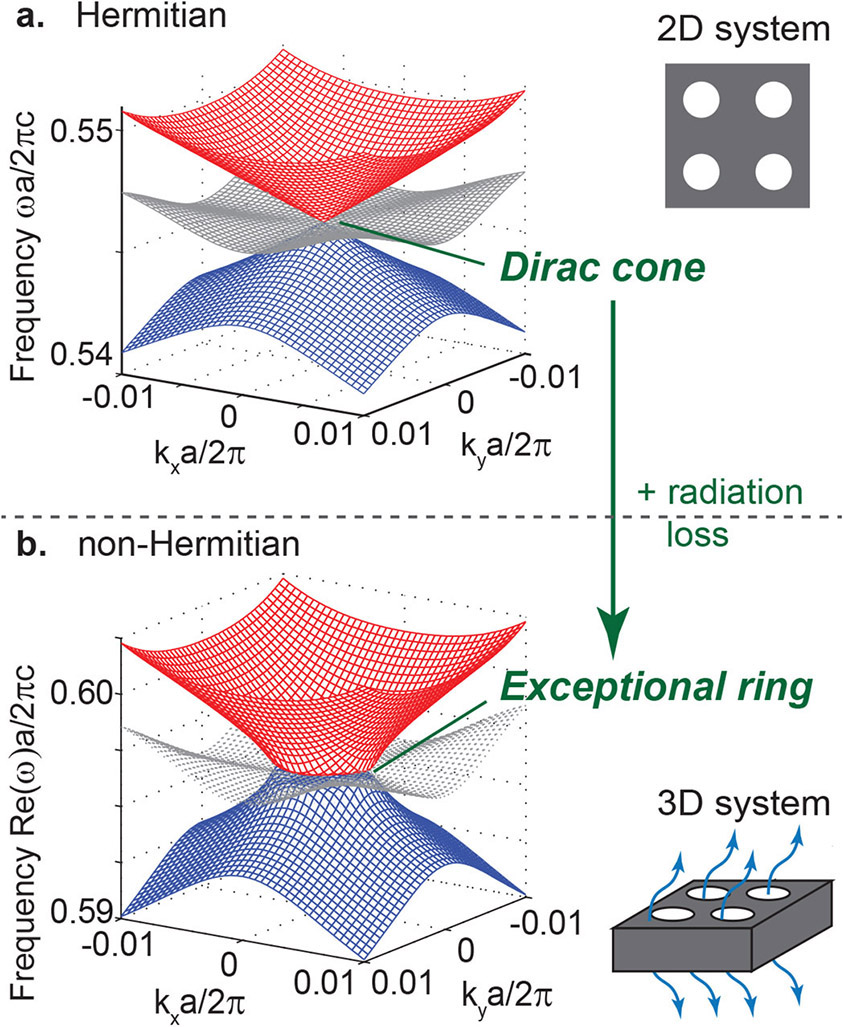 Figure 2. Deformation of a Dirac cone into an exceptional ring. (a) In a Hermitian system (a 2D photonic crystal), a Dirac cone can be produced via accidental degeneracy by varying the radius of the airhole. This is shown by the blue and red conical dispersions that touch at a single point. (b) A very similar 3D photonic crystal slab is no longer Hermitian, because energy can leak out via radiation. Consequently, the dispersion also changes dramatically: the tip of the cone is flattened and gives rise to a ring of EPs, or an exceptional ring. a: Lattice constant. kx and ky: Wave vectors in the x and y directions.

To demonstrate this effect, we fabricated a photonic crystal slab with a large area11 in accordance with the theoretical design. We performed measurements of angle-resolved reflectivity on this sample under different polarizations of light. A detailed analysis of the spectrum that we recorded yields parameters of the effective non-Hermitian Hamiltonian, which provides the complex eigenvalues of the system. Our results show that the complex eigenvalues become almost degenerate along both directions in momentum space that we measured, which confirms that an exceptional ring is present in our system.

Our results also demonstrate that our system exhibits the interesting phenomenon of coupled-resonator-induced transparency (CRIT). When a resonator is coupled to a waveguide that is otherwise perfectly transmissive, light can be totally reflected at the resonance frequency ω0 as a result of on-resonance coupling. When two coupled resonators are coupled to the same waveguide, light can be totally reflected at both resonance frequencies ω1 and ω2. Surprisingly, a transparency frequency can occur between ω1 and ω2, where light is fully transmitted with no reflection: this is referred to as CRIT.12 We observed CRIT between two large-area Bloch modes of photonic crystal slabs. This phenomenon has the potential to be useful in large-area narrow-band filters.

In pure physics, our method of generating an exceptional ring could be extended to other Dirac systems, such as electrons in graphene and cold atoms. By further study, we could advance our understanding of the connection between the topological properties of Dirac cones and those of EPs. Our work also provides a simple method of testing the properties of EPs and applying these to improve optical devices. For example, it would be of great interest to realize proposals to exploit the unusual square-root dispersion around EPs to manufacture single-particle detectors.13 Also, by applying EPs in photonic-crystal surface-emitting lasers,14 we should be able to enlarge the lasing area while keeping the laser in single mode and therefore further increase the output power.

This work was partly supported by the Army Research Office through the Institute for Soldier Nanotechnologies under contracts W911NF-07-D0004 and W911NF-13-D-0001. Bo Zhen and Marin Soljačić were partly supported by S3TEC, an Energy Frontier Research Center funded by the US Department of Energy under grant DE-SC0001299.

Bo Zhen received a BS in 2008 from Tsinghua University, China, and a PhD in 2014 from MIT. Since then, he has been working as a joint postdoctoral associate with Marin Soljačić at MIT and Mordechai Segev at Technion, Israel.

Chia Wei Hsu received a BA in 2010 from Wesleyan University and a PhD in 2015 from Harvard University. He is now a postdoctoral associate in A. Douglas Stone's and Hui Cao's groups at Yale University.

John D. Joannopoulos received a BA in 1968 and a PhD in 1974 from the University of California, Berkeley. He has been on the faculty at MIT since 1974 and is the Francis Wright Davis Professor of Physics and the director of the Institute for Soldier Nanotechnologies.

Marin Soljačić is a MacArthur Fellow and professor of physics at MIT. He received two BSEs in 1996 from MIT and a PhD in 2000 from Princeton University.