Vanadate-based compounds (which have an oxygen-containing vanadium ion) have been widely studied for applications in catalysis, cathodes, lithium secondary batteries, and white LEDs.1–3 Depending on its chemical composition, the binary vanadate compound CdO-V2O5 exhibits optical, structural, and thermal properties, as well as physical characteristics such as electrical conductivity.4–7 While observing Cd2V2O7—another vanadate compound in the same binary system—we saw a transformation from crystalline to amorphous phase. This structural change is associated with increased conductivity in the transformed material, making it useful for fabricating batteries and LEDs.8 Therefore, considering the potential applications of CdO-V2O5, we sought to use x-ray and Raman spectroscopy to explore the polycrystalline-to-amorphous transition in that compound.

We prepared sample oxide mixtures containing the reactants cadmium oxide (CdO) and vanadium oxide (V2O5). Specifically, we analyzed four different molar proportions: 100–0, 50–50, 33–67, and 25–75mol% of V2O5  and CdO, respectively, and refer to the samples hereafter as G1, G2, G3, and G4. We melted the mixtures in an alumina crucible at temperatures of 800–1000°C, and then quenched them onto a copper plate at room temperature.

The diffraction patterns of the G1, G2, and G3 samples match well with the polycrystalline phases of V2O5, CdV2O6, and Cd2V2O7, respectively (see Figure 1). However, the lack of diffraction peaks in the G4 sample suggests the presence of an amorphous phase. Raman spectra show that the vibrational modes of the G1, G2, and G3 samples correspond to V2O5, CdV2O6; and Cd2V2O7 polycrystalline phases, respectively (see Figure 2).9,10 In the case of sample G4, its Raman spectrum consists of a broad band centered at 848cm−1, which is associated with amorphous Cd2V2O7.11 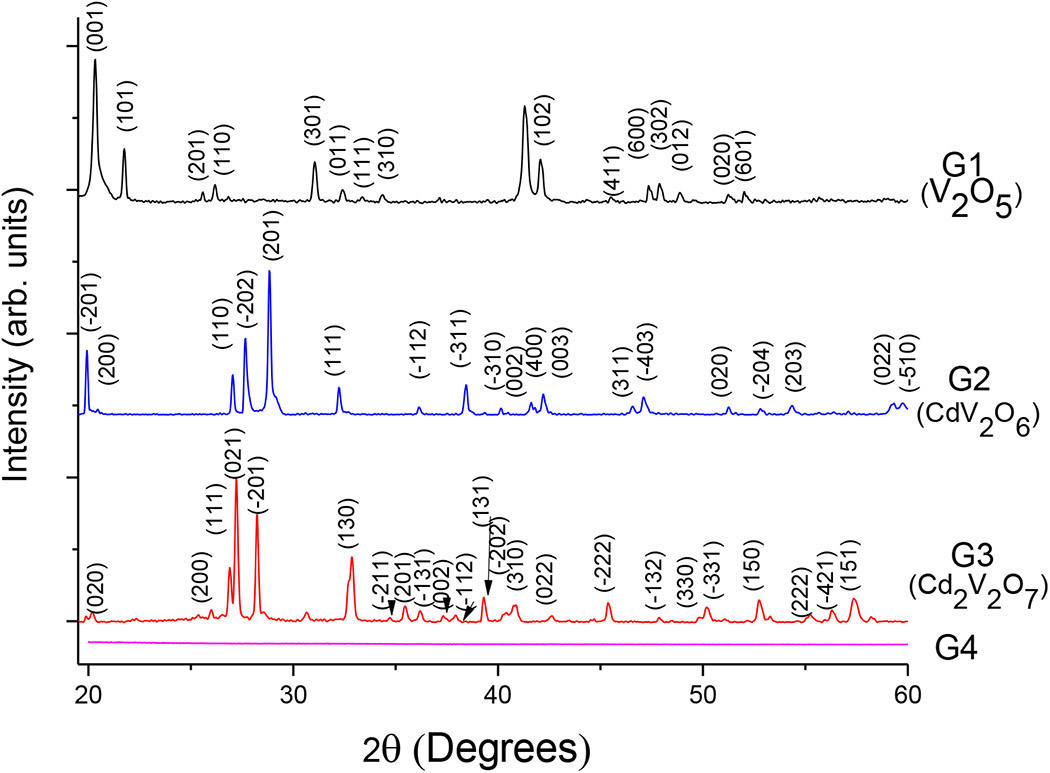 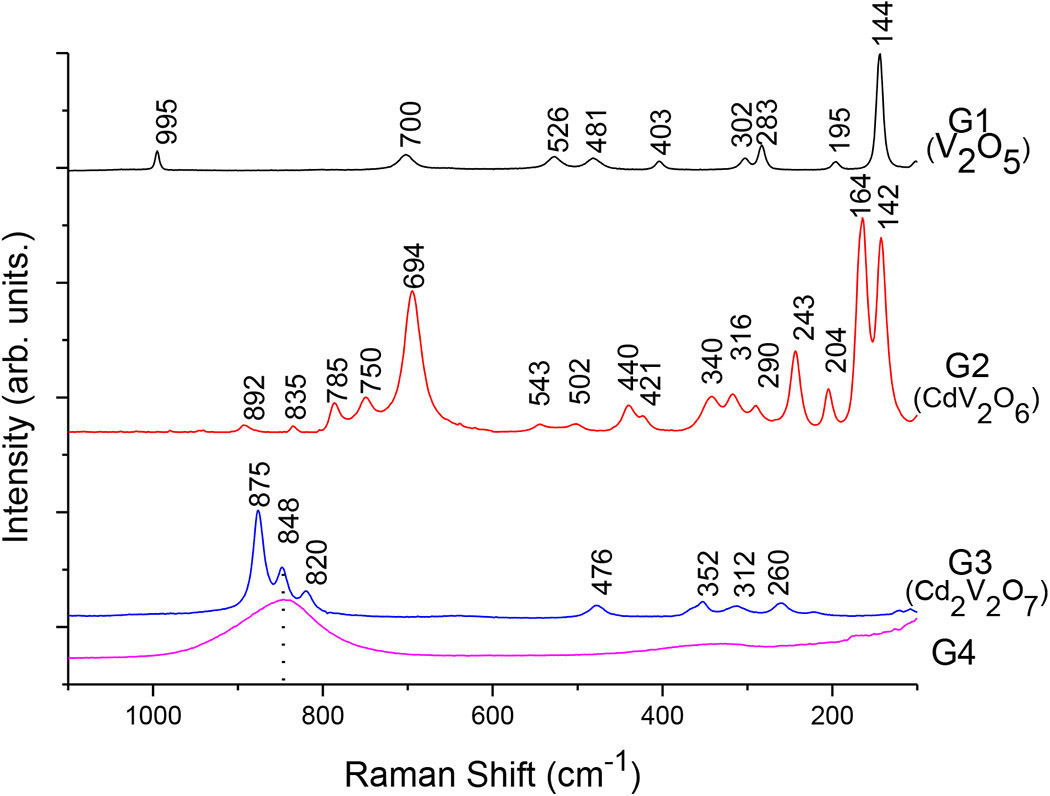 Moreover, using Franklin's rule R=−[ln ω /21; 349]/1:9176,10 we found a correlation between the mol% of the reactants, and the vanadium-oxygen (V–O) bond length. In this equation, R is the bond length in Å, and ω the frequency of the stretching vibrations in cm−1. Applying this equation to the highest frequency bands at 995, 892, and 875cm−1, we found the V–O bond lengths to be 1.599, 1.655, and 1.665Å, for the G1, G2, and G3 samples, respectively. Thus, we observed that the V–O bond length increases with the starting amount of CdO up to 65mol%. For CdO content higher than 65mol%, the samples become amorphous. We attribute this behavior to the excessive oxygen incorporation into the VO3 units (see Figure 3) as a consequence of the Cd2+ incorporation, which gradually increases the V–O bond length up to 1.665Å. The excess Cd2+ breaks the V–O–V bridges (band centered at 848cm−1), leading to an amorphous compound,8 in agreement with the lack of diffraction patterns observed for the G4 sample (see Figure 1). 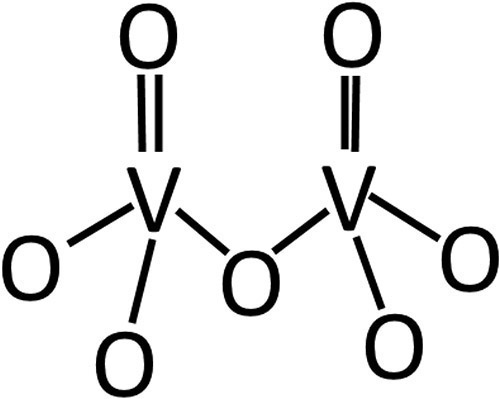 In summary, we used melt-quenching to prepare CdO-V2O5 binary compounds with various starting amounts of CdO, and achieved a transformation from polycrystalline to amorphous phase. This is associated with the increase of the V–O bond length, as a consequence of the relative amount of Cd2+. In future work, we will study the effect of such structural changes on the emission of erbium (Er3+) and neodymium (Nd3+) for applications such as optical fiber communications, solid-state lasers, and photovoltaic cells.12, 13