For several years, we have been using multiscale molecular modeling to understand how lipid membranes are affected by the interaction with solid surfaces.1–5 Lipid membranes are simplified model systems for cell membranes. For many nanotechnological applications, e.g., biosensors, biological membranes need to be stabilized on a solid support. Also, many experimental techniques, such as atomic force microscopy, are much easier to apply to a solid-supported system. Thus, it is important to understand the difference between solid-supported and free membranes.

Biological membranes consist of lipids and proteins. As the lipids make up the essential cell membrane structure in which the proteins exist, for simplicity, the proteins are not included in model membranes. Lipids have a hydrophilic (water-preferring) side and a hydrophobic (water-repelling) side. This leads to a bilayer structure where the hydrophilic parts stick toward the water and the hydrophobic parts point away from the water (see Figure 1). 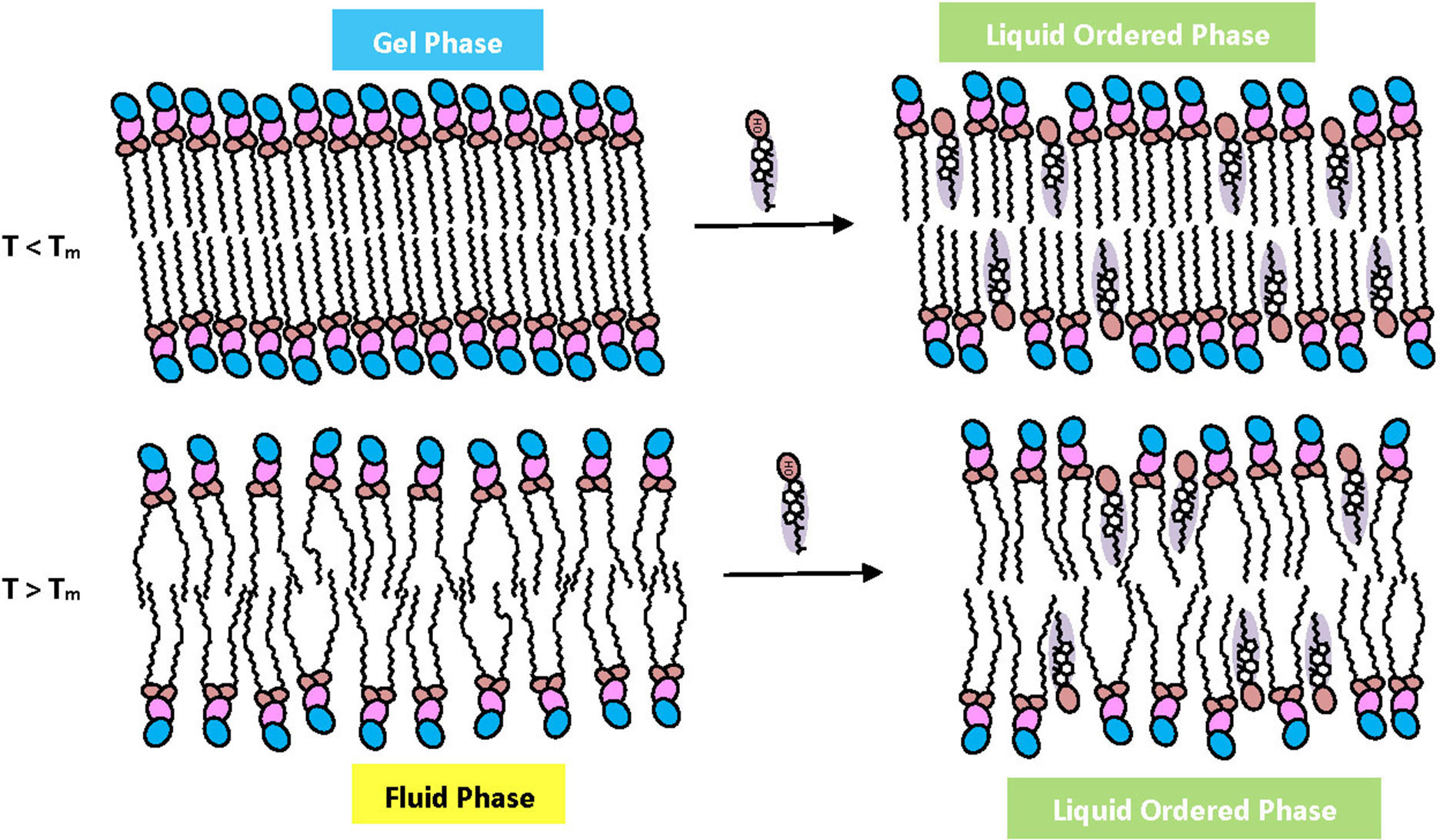 It had been assumed that a supported bilayer system is only minimally different from an unsupported membrane. Over the last decade, we have computationally elucidated a number of differences between free and supported systems. For example, ordinarily symmetric membranes become asymmetric if they are in close contact with a surface. The more highly ordered membrane side closer to the surface has about a 5% higher density of lipids (and sterols, e.g., cholesterol).3 Also the membrane order of that side is significantly higher.4 It was found that pressure distributions within a membrane are strongly altered, which has important consequences for the functioning of proteins in the membrane.2 Local pressure changes induced by the support lead to free energy changes over the volume of a protein that are similar in magnitude to the energy differences between different protein states. Thus, the interaction between the membrane and the support can suppress protein function.

In cell membranes there is a level of organization that is still under debate. There are regions of higher and lower order (see Figure 1 for structures). Several different models exist to explain this, one of the most prominent being the raft model.7 This model proposes that higher-order domains (so-called rafts) containing high concentrations of sterols and saturated lipids are surrounded by a sea of more fluid lipids. Systems need at least three different types of lipids to exhibit this form of separation, and the behavior of such mixtures is essential for understanding the microstructure of cell membranes. In our most recent work5, we studied how the behavior of mixtures containing three different lipids (a higher-order lipid, a lower-order lipid, and a sterol) are affected by a solid support (see Figure 2). Our simulations5 show that the overall phase moves toward higher order when interacting with a surface. We clearly see clustering of lipids of the same type, but the simulation timescale was too short to yield any larger phase-separated domains. The clusters are larger and the order is higher in supported systems. Structural parameters suggest heterogeneous phase behavior, without the formation of discrete domains. The solid support shows a consistent ordering effect on the side closer to the support. The water between the support and the membrane is also ordered, and this ordering is temperature-dependent. The direct association of lipid head groups with ordered water layers effectively holds the bilayer to the solid surface. Figure 2. Snapshots of the surface of the upper membrane layer (away from the support) for systems with 20% cholesterol (CHOL), 40% dipalmitoylphosphatidylcholine (DPPC), a higher-order lipid, and 40% dioleoylphosphatidylcholine (DOPC), a lower-order lipid. Temperature increases from left to right. Top row: Free lipid bilayers (FLB). Bottom row: Supported lipid bilayers (SLB). DPPC molecules are shown in blue, DOPC in red, and CHOL in yellow. Supported membranes are higher order and have stronger clustering of lipids of the same type.5

Mounting lipid bilayers on a support increases the phase order, especially on the side attached to the support. This increase in order also increases the density, and this could suppress membrane protein function. The next step is to directly include various model proteins to better understand which proteins are affected less strongly. Currently, we are also expanding these studies to membranes that are chemically tethered to flat or curved surfaces, which is very important for drug delivery systems.8

This work was partially supported by the Cyber Discovery Initiative of the US National Science Foundation under grant 0941690.

Roland Faller received his undergraduate physics degree from Bayreuth University, Germany, and his PhD from Johannes Gutenberg University Mainz, Germany, also in physics. After a postdoctoral position at the University of Wisconsin, Madison, he joined the faculty at UC Davis. He is currently a professor and co-chair in the Department of Chemical Engineering and Materials Science, leading a group researching multiscale modeling for soft condensed matter.

Holden Ranz obtained his BS from Lafayette College, PA, in 2012, and his MS from UC Davis in 2014, both in chemical engineering.