Studying the conditions under which a moving refractive index front acts as an analog event horizon and emits photons from the vacuum helps better understand the Hawking emission mechanism.
05 November 2015
Maxime Jacquet and Friedrich König

What happens to quantum vacuum fields in the vicinity of the event horizon of a black hole? In his theoretical argument combining general relativity, thermodynamics, and quantum mechanics, Hawking postulated that the black hole would emit radiation of temperature inversely proportional to its mass—known as Hawking radiation (HR)—and eventually evaporate.1 Unfortunately, HR is far too weak to be detected directly: the Chandrasekhar limit sets the lowest possible mass of a black hole to 1.39 solar masses, and the corresponding HR emitted would be one billion times weaker than the cosmic microwave background. Discovering the statistical mechanics behind these horizons would significantly contribute to combining quantum field theory and general relativity and understanding quantum gravity.

A black hole horizon separates two regions of space-time flow: the outside, where space-time falls at subluminal speeds, and the inside, where space-time falls toward the central singularity at superluminal speeds. Unruh2 showed how considering space-time as a fluid medium allows us to create laboratory analogs of event horizons. In 2008, Philbin and coworkers created an artificial optical event horizon with a pulse of light in an optical fiber.3 As light travels slower under the pulse, the front edge of the pulse separates a sub- from a superluminal region. Their studies allow for high-temperature HR without the thermal background, promising the laboratory measurement of the Hawking effect. Finazzi and Carusotto presented a simplified—but fully quantized—analytical model for the spontaneous emission of light from a moving dielectric boundary.4 The pulse is represented by a moving change in a refractive index front (RIF) in a dispersive medium. Light in the medium may experience analog black or white hole or horizonless configurations at the boundary, leading to mode mixing and spontaneous emission of radiation. They found that the emission was dominant over optical frequencies and focused on emission spectra in positive-norm optical modes. However, because of dispersion various positive and negative modes are expected to exist on either side of the boundary for a fixed moving frequency. We extend their model to reveal the properties of quantum vacuum emission from all positive- and negative-norm modes for any frequency and change in refractive index (or step height).5

We describe the nonlinear dielectric using a canonical model of light–matter interaction. The medium consists of two homogeneous regions separated by an RIF that moves to the right (see Figure 1). We consider emission from all modes of the field for a small refractive index change with respect to the refractive index of the right region. We then identify the modes of light allowed to propagate in the medium. We found two frequency intervals over which the RIF acts as an analog event horizon to modes in the medium. At low frequencies, the RIF acts as a white hole horizon: light can approach but not enter the right region. The RIF moves at superluminal speed to all modes on its right and at subluminal speed to a mode on its left. At high frequencies, light experiences a black hole horizon at the RIF as it cannot propagate to the right from beyond the RIF. The RIF moves at subluminal speed to a mode on its right and at superluminal speed to all modes on its left. Thus, one mode allows light to escape from the RIF to the right, reminiscent of HR from black holes. Over both intervals, the RIF separates a region of subluminal speed from a region of superluminal speed. These regions are the outside and inside of analog black and white holes, respectively. For frequencies outside these intervals, no horizons exist.

We are also studying the scattering of stationary positive frequency waves at the RIF in the moving frame. The outgoing fields are populated with photons even when the incoming field is in a vacuum state. This is attributed to mixing of waves with positive and negative laboratory frequency at the RIF, which is the essence of Hawking emission. As the vacuum state in the outgoing field differs from that of the incoming field, photons are spontaneously emitted from the vacuum.

Figure 2 presents the emission spectra with contributions from all frequency optical modes as measured in the laboratory frame. Emission was found to be stronger over the black and white hole frequency intervals. Horizon-less configurations also exhibit spontaneous emission, although much weaker. Most of the emission is concentrated in a peak in the UV, corresponding to contributions from the negative optical frequency mode, which is the partner mode in any Hawking-type emission. Since emission is generated by pairwise coupling of two modes with opposite frequencies, the partner (positive frequency) photon should be found at the remaining optical frequencies. Note that the mode that allows light to escape from the RIF over the analog black hole interval accounts for the peak at visible wavelengths. We expect that to be the partner photon. 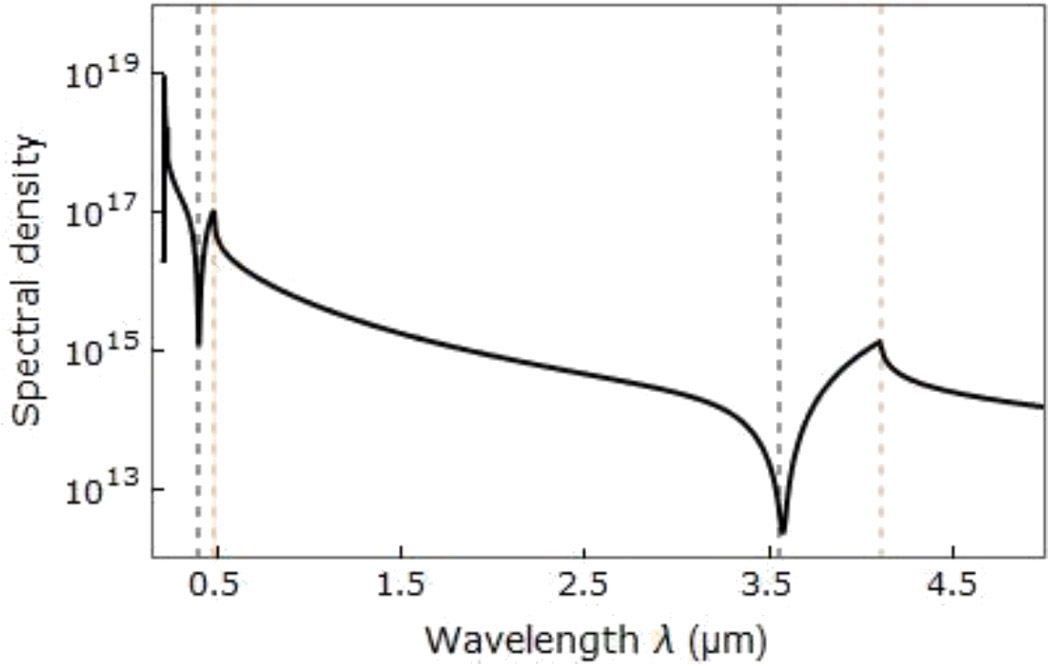 Figure 2. Spectrum of light emitted from the vacuum by the Hawking process for a step height of δn=0.002. The emission is strongest in the UV peak and is decreasing except for the short (long) wavelength intervals corresponding to a black (white) hole analog horizon.

With this technique, for any RIF height and velocity, we can calculate the spectra of the emission and the number of photons emitted from the vacuum. Future work will reveal the exact quantum state of the output and correlations between different parts of the spectrum. Our results will pave the way to experimental observation of photons spontaneously emitted from the vacuum by an analog Hawking process.