A high-definition space telescope for the 2030s

A 12m-wide, segmented-mirror space telescope would search for Earth-like planets around Sun-like stars to answer the questions: Are we alone? How did we come to be?
05 October 2015
Marc Postman, Heidi Hammel, Julianne Dalcanton and Sara Seager

Are Earth-like worlds common in our Universe? How did life emerge from a lifeless cosmic beginning? With the right technology, and the right telescope, we could soon answer these questions by searching nearby exoplanets (those outside the Solar System) for signs of life, and tell the cosmic story of how this life came to be.

Following on from the James Webb Space Telescope (JWST), which is currently under construction and due to launch in 2018, the Association of Universities for Research in Astronomy (AURA) commissioned a study to assess future space telescope options. The investigation concludes that a space telescope with a 12m-wide primary mirror could find and characterize dozens of Earth-like planets, and make transformational advances across nearly all fields of astrophysics. This concept is known as the High Definition Space Telescope (HDST).

The telescope would operate at wavelengths from UV (0.1μ) through near-IR (NIR, up to 2.5μ), viewing the universe from the second Earth-Sun Lagrange point. This is a region 1.5 million kilometers from the Earth, where a telescope's orbital period around the Sun matches that of the Earth, allowing the telescope to reside far from the glare of the Earth and moon, but still maintain a constant position with respect to the Earth throughout the year. Our telescope's segmented mirror would be folded into a heavy-lift rocket and deployed on orbit, from where it would directly image exoplanets—including those some 10 billion times fainter than their host star—by suppressing the star's light. HDST's exquisite image quality at visible wavelengths (with more than 25 times the resolving power of the Hubble Space Telescope) and its high UV sensitivity (100 times more sensitive than Hubble), combined with a versatile set of imaging and spectroscopic instruments, will trigger profound breakthroughs in astrophysics.

HDST would support a broad range of scientific investigations, but its primary goal is to find and characterize dozens of Earth-like exoplanets. A sample of dozens of exoEarths offers an opportunity to identify truly Earth-like worlds (with rocky surfaces and oceans) amidst a variety of terrestrial planets (those composed largely of silicate rocks or metals). With this large sample, observing telltale signs of life in the planets' atmospheres becomes possible. If life is rare, HDST will take us from our current status—that is, complete ignorance of the occurrence rate of inhabited worlds—to a first constraint. If life is common, a large sample of terrestrial worlds with highly unusual atmospheric chemistry will secure the conclusion that life of some kind exists beyond the Earth, regardless of possible false positives. Distinguishing habitable worlds like Earth (i.e., those with surface water) from greenhouse planets like Venus, or barren worlds like Mars, requires an understanding of a planet's atmosphere. HDST will therefore not just image new worlds (see Figure 1), but will also acquire spectra of their atmospheres to search for signs that indicate a potential planet like our own. 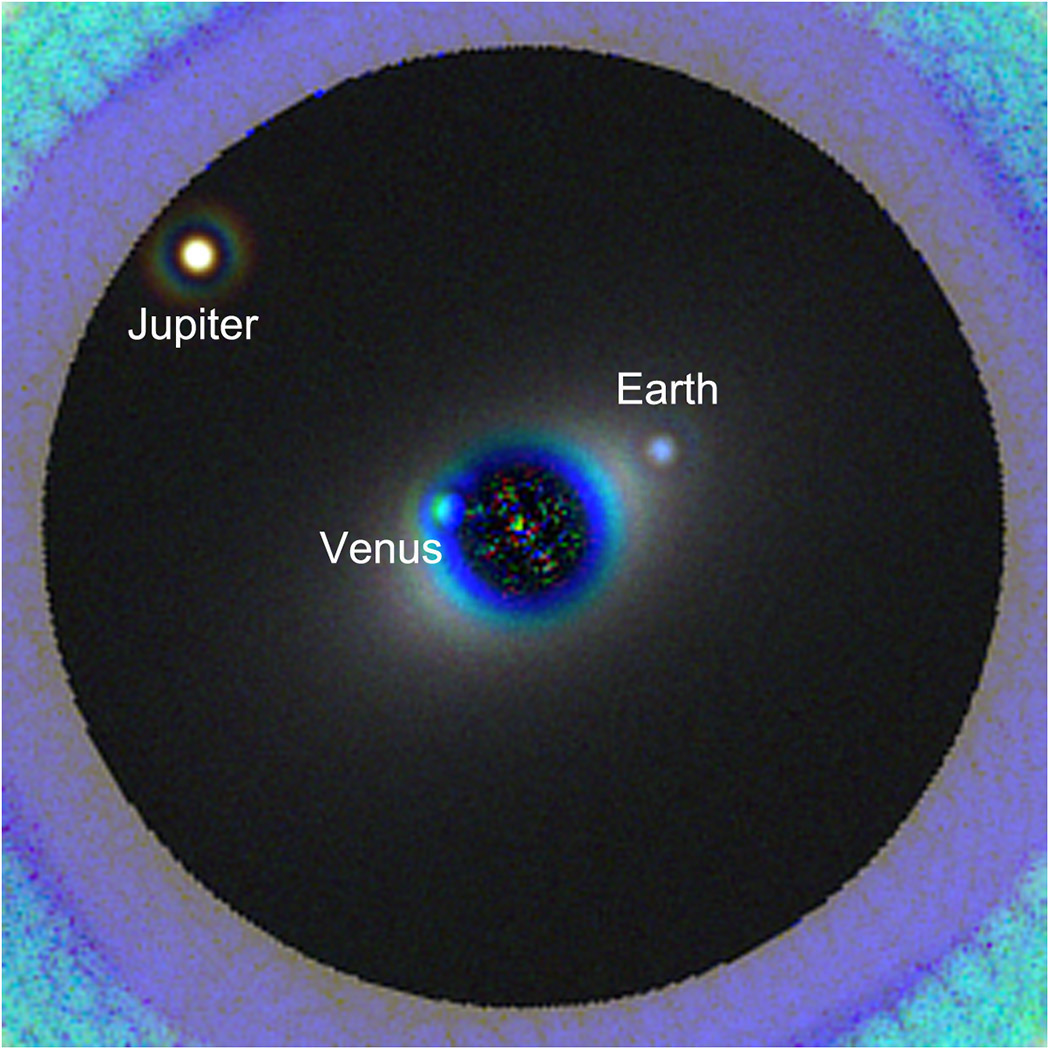 Figure 1. A simulation of a Solar System twin at a distance of 45 light years, as seen with the High Definition Space Telescope (HDST) and a binary apodized-pupil coronagraph.1The image here simulates a 40h exposure in three filters with 10% bandwidths centered at 400, 500, and 600nm. The inner and outer working angles used in this simulation are 4 and 30λ/D, respectively. Perfect point spread function subtraction has been assumed (i.e., no wavefront drifts between target star and calibrator star). The Earth and its blue color are easily detected. The color of Venus is biased because that planet lies inside the inner working angle in the reddest exposure. The image employs a linear stretch to the outer working angle and a logarithmic stretch beyond that (where the purple-colored ring begins). (Image provided by Laurent Peuyo, Space Telescope Science Institute.)

The telescope has the ability to take an optical image or spectrum at about 100parsec spatial resolution or better, for any observable object in the entire Universe (see Figure 2). This resolution threshold is on the scale of individual star-forming regions and dwarf satellites: the building blocks of galaxies. HDST's high sensitivity, resolution, and stability will therefore transform current understanding of how galaxies, stars, and planets form and evolve. HDST will also inform studies of our own Solar System, elucidate complex chemistry within the nearest stellar populations, and trace stellar motions within the smallest, dark matter-dominated galaxies. The telescope will make the first maps of the nearly invisible material fueling the growth of galaxies, thanks to its 100× gain in UV sensitivity over Hubble, and its multiplexed instrument modes. In many studies, HDST will operate in tandem with next-generation 30m ground-based telescopes.

HDST will operate at ∼270K, a higher temperature than that at which JWST functions. This difference will allow the system to use lower-cost optical materials, incur less thermal stress in the structures, simplify component and system design, manufacturing, and qualification, and lower the costs of system integration and testing. The first priority is to develop a high-contrast coronagraph, a device that blocks light from a star to enable direct detection of the planets orbiting it. The coronagraph onboard HDST would need to block out the starlight to one part in 10 billion for planet-star projected separations as small as 35 milliarcseconds. Another starlight-suppression instrument is a starshade: a free-flying specially shaped device that casts its shadow on a telescope thousands of kilometers away. We could employ starshades in a second phase of the mission to enable more detailed characterization of interesting planetary systems. The second-highest priority recommendation is to address segmented mirror system technologies, including the mirrors, structure, and mounts. The key issues are thermal and dynamic stability, optical performance, mirror mass density, and efficiency of manufacture.

To summarize, the AURA report2 describes a 12m-class space telescope, HDST, which would transform how we—scientists and public alike—see our place in the universe. Our future work will focus on developing the new technology that will help realize this ambitious telescope in less than two decades.

Marc Postman received his PhD in astronomy from Harvard University in 1986. He studies the formation and evolution of structure in the universe. He was principal investigator for a NASA concept study for the next generation of UV/Optical/NIR space telescopes.