Tracking the transport of nanoparticles in a plasmonic optical lattice

In solid-state physics, when atoms are brought into close proximity their electrons can exhibit delocalized transport (i.e., they may move through the periodic potentials within the solid). This may produce a Bloch state, a specific wave function for a periodically repeating environment that enables description of electrons in a crystal structure. In a similar way, forcing microparticles and nanoparticles through periodic optical potentials, or an optical lattice (a spatially periodic polarization pattern formed by the interference of counter-propagating laser beams), has enabled many interesting statistical transport phenomena and applications.1 For example, highly efficient sorting of microparticles has been achieved, based on either the index of refraction or the size of the particles in a 3D optical lattice within a microfluidic environment.2 Such particle sorting could have applications in the sorting of viruses, proteins, and other particles. However, if one attempts to shrink the spatial dimensions of these experiments, the size of the particles that can be trapped (i.e., manipulated or measured) is restricted by the diffraction limit. Specifically, the trapping efficiency for an object of radius a drops rapidly (i.e., following a cubic power law, a3).3

In our research we have sought to enable transport of nanoparticles in a plasmonic optical lattice. We pack many plasmonic nanostructures (in this case, nanodisks) into a unit cell. We also associate each cell with a simple square lattice to form a periodic potential (see Figure 1).7 This creates multiple sites that can optically tweeze the nanoparticles. It can also support delocalized transport, with the proper choice of lattice period, as well as depth and width of the trapping site. 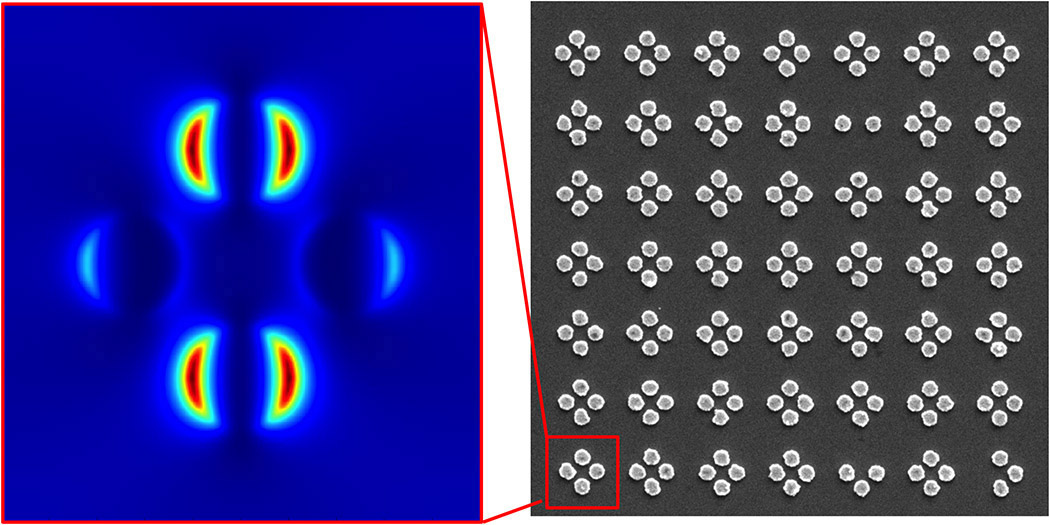 To test our plasmonic optical lattice approach, we have built an inversion microscope setup, which we modified from a commercial optical tweezer kit (using gold nanostructures fabricated through electron beam lithography). In our first experiment, we illuminated the nanoplasmonic array of gold nanodisks using a semiconductor diode laser to loosely focus a Gaussian beam that had a wavelength in the near-IR regime (980nm). Then, using fluorescent image video microscopy, we tracked the transport of polystyrene nanoparticles dispersed on the nanoplasmonic array.

The results of our experiments showed that the optical lattice conferred delocalized transport on nanoparticles as small as 100nm in diameter (see Figure 2). The Gaussian beam produced a gradient, which caused the nanoparticles to roam from the edge of the array to the center. We thus found that larger nanoparticles (diameter 500nm) formed predominantly hexagonal close-packed clustering (see Figure 2). We also conducted further analysis on single particle trajectories that we collected. As such, we were able to confirm that particle transport in our experiments was indeed faster than in free diffusion.7

It may be appropriate, in the future, for our plasmonic optical lattice approach to be used for probing the quantum mechanical interactions of atoms. For instance, the consequences of shrinking the dimensions of an optical lattice have already been calculated.8 It was found that it is possible to enhance the quantum mechanical tunneling effect between trapped atoms by several orders of magnitude. We are therefore interested in realizing this effect experimentally, with the use of our plasmonic optical lattice/trapping techniques (e.g., with silver nanoplasmonic arrays). Another possible application of our approach (in biology) is to support the optofluidic cultivation of photosynthetic bacteria, through an enhanced evanescent plasmonic field. This could allow the production of biofuels through carbon fixation.9 To develop these concepts further, it may be necessary to consider the possibility of forcing nanoparticles of different size or refractive index into a properly designed plasmonic optical lattice (i.e., such that they follow different trajectories to facilitate sorting in microfluidic environments).10 Photothermal heating (heat retained from the absorbed light), however, causes convection that can adversely disrupt the transport of nanoparticles. Several groups have attempted to characterize such effects by measuring either the temperature increase or the convectional flow of the nanoplasmonic array.11, 12 Indeed, one research group have shown that substrates of high thermal conductivity (e.g., copper) can serve as heat sinks in the nanostructure.13 As such, they can offer a potential solution to the problem of excess heat.

In summary, we have created a plasmonic optical lattice that enables optical tweezing of nanoparticles and that supports their delocalized transport. Our approach has several potential applications, for example, in the fields of nanotechnology, atomic physics, and biofuel production. We are currently focused on elucidating the contribution of thermal convection in our technique. Our aim is to identify an optimal engineering strategy that can be used to counter photothermal effects and therefore fully exploit the potential of plasmonic optical lattices.

Ya-Tang Yang is assistant professor in the Department of Electrical Engineering. His main research interests are plasmonic optical tweezers and microfluidic bioreactors for microbiology applications. He has authored 15 papers in the field of nanomechanics, nano-optics, and microfluidics.