How did we make the leap from producing the first electric light bulb to producing magnetically levitated (maglev) trains that travel at up to 360mph? This would not have been possible without more than two centuries of continuously improving what we know about how electrons behave in materials, and harnessing that behavior. At the National Synchrotron Light Source II (NSLS-II), we are building a new tool that will contribute to the next chapter of understanding how electrons behave. The soft inelastic x-ray scattering beamline (SIX) uses cutting-edge instrumentation to observe exotic electronic behavior with unprecedented accuracy. If all goes according to plan, SIX will see first light toward the end of 2016.

Characterizing electrons inside a material is a lot like charting students' behavior in a high school hallway. Some like to mix with others and some don't, some are mobile, some are bound in groups, while some behave independently, and others adopt the dynamic behaviors of their collective group. Novel materials with finely engineered combinations of electron behaviors can exhibit fascinating phenomena. One such example is superconductivity: a material's ability to transmit electricity with absolutely zero electrical resistance (currently only at very low temperatures). Superconductors could dramatically improve energy storage and the electrical grid, maglev trains, and supercomputers, and may even lead to floating hoverboards like those in the movie Back to the Future II!

SIX will help us study how electrons behave in these novel materials using synchrotrons (particle accelerators) and resonant inelastic x-ray scattering (RIXS).1 With this technique, we aim an intense x-ray beam at a sample to excite specific electrons of interest, and use a detector to measure how much energy and momentum are transferred from the x-rays to the electrons. The results provide important information about the electrons' charge, spin, and orbital degrees of freedom when interesting phenomena emerge.2, 3 The RIXS technique uses fine energy-resolved x-rays to accurately characterize electrons, yet every RIXS scientist shares the same struggle: to probe the most intriguing physical phenomena involves studying collective electron behaviors whose excitations take place at low energies. The signals they emit are very close to a much stronger signal called the elastic peak, which hides the indicators we are seeking. We need a tremendously high energy-resolving power to sharpen that elastic peak and therefore to unveil the signals from these low-energy excitations.4 The SIX beamline will offer an energy-resolving power of 100,000 (10meV at 1keV on both the beamline and the spectrometer)—an order of magnitude greater than the best beamlines currently available—and more powerful than other RIXS beamlines under development around the world.

There are several key factors that contribute to SIX's high resolving power. First, the beamline is 105m long, compared with the more typical 40–80m. It juts out from NSLS-II's storage ring, and is so long that we had an extension built from the main ring building to house it (see Figure 1). The longer the distance between the beamline grating and the exit slit that selects the incoming beam wavelength, the higher the resolving power; hence the need for a long beamline. 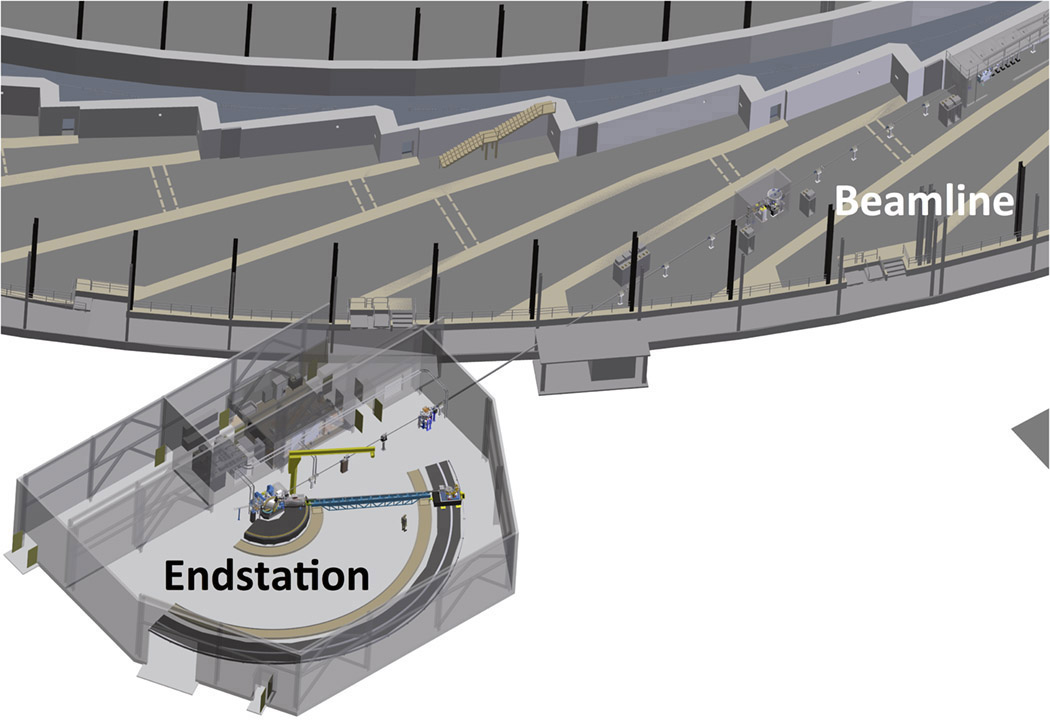 In addition, SIX has a spectrometer on an arm that swings the detector 15m away from the sample. The distance between the spectrometer grating and the detector is crucial for the resolving power. The detector will have the ability to continuously rotate about the sample to cover a nearly 115° range without breaking the ultrahigh vacuum, using a combination of three rotating flanges moving in concert (see Figure 2). In x-ray scattering, a continuous coverage of the angle between the incoming and scattering beams is essential to the measurement of periodic signals in crystalline samples. We can routinely achieve this with hard x-rays, where the incoming and scattering beam pipes are usually decoupled. For soft x-rays, however, such coverage is a true mechanical challenge, requiring a continuous ultrahigh vacuum-tight path between the incoming and scattering beam pipes. Our system accomplishes this.

SIX also benefits from a new class of superior flat optics with slope errors under 50nrad: see Figure 3(a). The system's dispersion gratings—with resolving power of at least 100,000—match the precision of the other optical components. Such gratings are not commercially available, necessitating a separate research and development effort with Inprentus Inc. An example grating is shown in Figure 3(b). Our system has mechanical designs to reduce vibrations from nearby sources that could affect our results, such as the Long Island Expressway and the ocean (about nine miles south of NSLS-II). To this end, the concrete slab floor in the extension building is isolated from the footings and walls.

Figure 3. (a) Slope error of a flat grating substrate polished by Zygo Extreme Precision Optics for the SIX beamline and measured over the active optical surface by the NSLS-II Metrology Group. The root mean square slope error was found to be ∼37nrad. (b) An early production grating fabricated by Inprentus Inc.

In summary, we are developing a high energy-resolving power beamline for RIXS to help reveal signals that would otherwise be disguised by the elastic peak. These signals will enable new investigations of electron behavior in novel materials. Our future work will focus on using SIX to help resolve the problems of superconductivity and Kondo effect (scattering of electrons in a metal brought about by magnetic impurities).

Ignace Jarrige is a physicist with expertise in applying x-ray spectroscopy and scattering to problems in condensed matter physics and materials science. He is responsible for the SIX project at NSLS-II.

Valentina Bisogni is a physicist with expertise in soft x-ray and electron spectroscopy techniques applied to the study of strongly correlated electron systems. She is responsible for the procurement, fabrication, and installation of beamline components, and of subsystems in the SIX end station.

Joseph Dvorak is a physicist with expertise in soft x-ray spectroscopy and scattering, as well as soft x-ray instrumentation. He is responsible for the optical design of the SIX beamline and spectrometer.

William Leonhardt is a mechanical engineer with expertise in building beamlines and end stations for proton, neutron, heavy ion, and x-ray beamlines. He is responsible for the design, procurement, fabrication, and installation of the SIX end station and satellite building.

Stephen Antonelli is a mechanical engineer with expertise in x-ray beamline end-station design and fine motion control. He is responsible for several subsystems in the SIX end station, including the sample diffractometer, sample transfer, and cryogenic cooling systems.

Yi Zhu is a mechanical engineer with expertise in synchrotron beamline optics, mechanical system design, and related synchrotron instrument development. He is responsible for the design, procurement, fabrication, and installation of the SIX photon delivery system.

Jun Ma is a control engineer and is responsible for developing the control system for the SIX project.