Networks of fiber optic cables, laid on both land and the seabed, enable the transmission of large volumes of data between different continents. The reduction of signal strength in optical fibers (attenuation) poses a major challenge for long-distance optical communication. This issue, however can be overcome by using repeater stations at intermediate locations. At these stations, the signal is amplified and transmitted to a neighboring station, which allows the integrity of the signal to be maintained. Information that is distributed using this method of communication, however, is not secure and can be subject to interception without detection. If, on the other hand, information is encoded in the quantum states of single photons, the laws of quantum mechanics can—in principle—guarantee secure communication.1, 2 However, amplification of the quantum state of a single photon is not physically possible. Alternative light-amplification mechanisms are therefore required to allow quantum repeaters to function efficiently. Additionally, quantum communication (in which the communication rate depends solely on the local operational rate at the repeater stations) is desirable because it should enable communication rates to approach classical communication limits.3

Several approaches have been used to develop quantum repeaters.4 The resultant devices can be classified into three generations, depending on the methods used to correct loss and operational errors (see Figure 1). In the first method, heralded-entanglement generation—from two-photon interference, conditioned on the click patterns of the detector—is used to correct loss errors. Nested-entanglement purification (in which multiple low-fidelity entangled pairs are consumed to generate fewer higher fidelity entangled pairs) is also used to correct operation errors.5, 6 Heralded-entanglement generation and nested-entanglement purification require two-way classical communication between neighboring and remote stations, respectively. This requirement severely limits the communication rate.7 The second class of repeaters makes use of heralded-entanglement generation to correct losses and quantum-error correction for operational errors.8–10 These systems require two-way communication between neighboring stations only, and this method is therefore faster than the first approach. The third method makes use of quantum-error correction for both loss and operational errors.3, 11 It therefore requires only one-way communication and could potentially offer ultrafast communication rates. 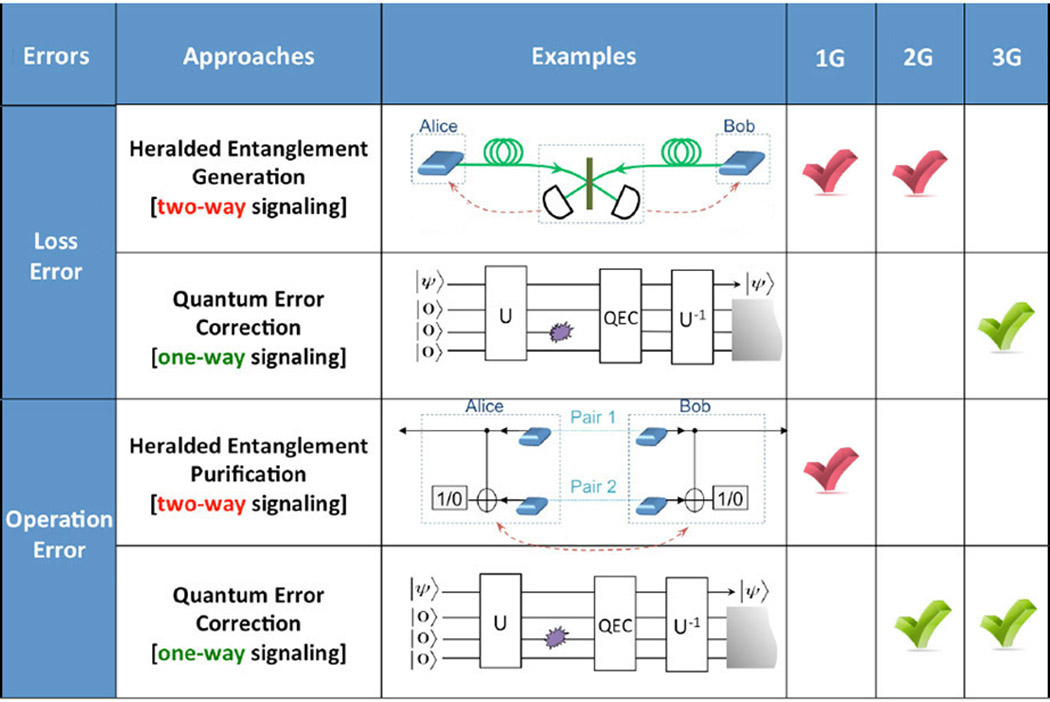 Figure 1. First-generation (1G), second-generation (2G), and third-generation (3G) methods used to correct loss and operation errors in quantum repeaters. QEC: Quantum error correction. The red dashed arrows indicate classical communication. |ψ〉: The unknown quantum state to be transmitted. U: The encoder. U 1: The decoder. |0〉: Quantum bit (qubit) initialized to a base state (e.g., the ground state of an atom).12

We have recently proposed an efficient, ultrafast one-way quantum repeater (third-generation) scheme (see Figure 2). In this scheme, we use teleportation-based error correction at individual repeater stations to correct erasure and operation errors in a fault-tolerant manner. We have studied the performance of this scheme under the presence of various operation errors and coupling losses.13, 14 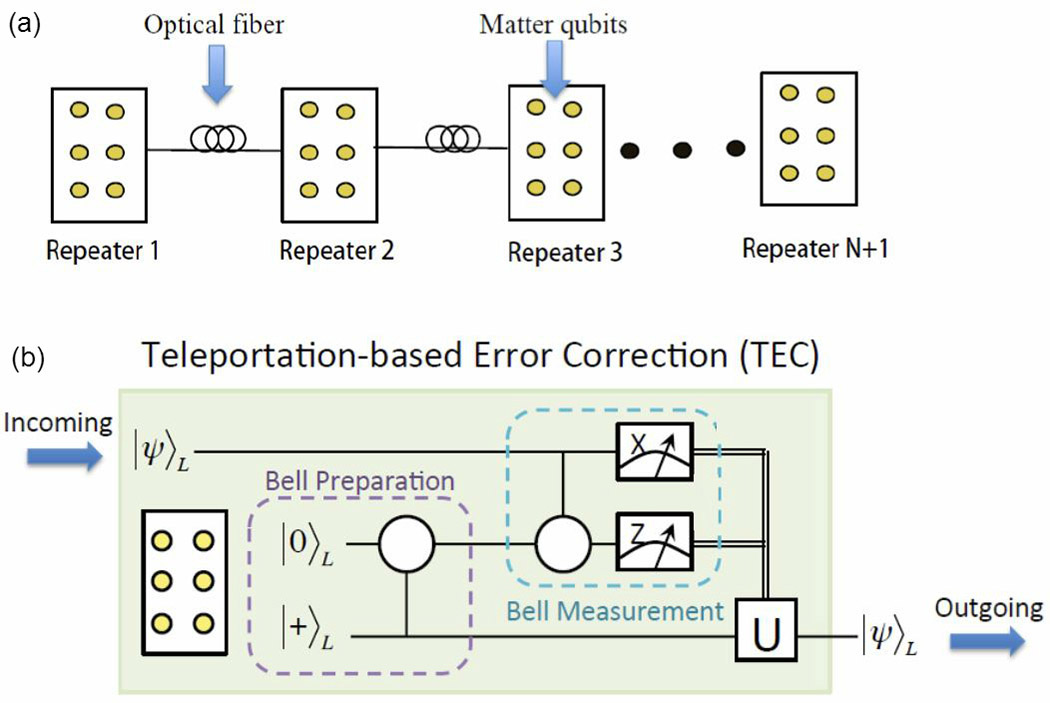 Figure 2. (a) A schematic view of one-way quantum repeaters. Individual matter qubits in the repeater stations are connected by an optical fiber. (b) The teleportation-based error correction procedure. The procedure consists of Bell-state preparation and Bell measurement at the encoded level. Each line in the circuit represents an encoding block. The resultant controlled-NOT gate has a transversal implementation for Calderbank-Shor-Steane quantum-error-correcting codes. |0〉L, |+〉L: Logical states. |ψ〉L: Encoded quantum state. Conditioned on the measurement outcomes of logical operators X and Z, an additional unitary operation (U) is applied to the remaining encoding block, thereby completing the teleportation-based error correction.13

With our scheme, local preparation of encoded Bell pairs at every repeater station is required. To do this, we use a fault-tolerant procedure to suppress any correlated operation errors. The measurements are performed on individual quantum bits (qubits) and the outcomes are relayed to the destination, where the information is decoded. In our repeater architecture, quantum information is encoded into error-correcting code and transmitted to the neighboring repeater station, where we apply a teleportation-based error correction. From here, the photons are transmitted to the next station. The communication rate depends solely on the time taken for the teleportation-based error-correction procedure. For example, with microsecond quantum gates and measurement, quantum repeaters can operate at MHz speed. To compare the performances of different quantum repeater schemes and find the optimized system parameters (e.g., repeater spacing, secure key-generation rate, and number of qubits per station for our repeater architecture), we introduced a cost coefficient (defined by the number of qubits needed per kilometer to generate one secure bit per second).13 In future studies, this coefficient could be used to compare (and find the optimum) quantum repeater schemes under similar physical parameters.

Although our one-way quantum repeater scheme provides ultrafast communication rates (about three orders of magnitude higher than two-way schemes), it is technologically very demanding for a number of reasons.13, 14 First, any error-correcting code can correct no more than 50% of loss errors deterministically.15 This includes the loss from fiber attenuation and other coupling losses. The coupling efficiencies must therefore be very high for one-way repeaters to function efficiently. Second, the production of small encoded blocks of tens or hundreds of qubits are required, which remains a technical challenge. Third, to ensure integrity in the transmitted information, operation errors need to be controlled below the threshold of the error-correcting code. In addition, there are a number of functionalities required to enable the implementation of quantum repeaters with multilevel systems. These functionalities include efficient inter-conversion between photonic qudits (units of quantum information in a d-level quantum system) and matter qubits, arbitrary gates on atomic qudits, as well as quantum gates between a photonic qudit and an atomic qudit.

Sreraman Muralidharan received his MSc in photonics from the Erasmus Mundus program in 2011. He is currently a PhD student.

Liang Jiang obtained his PhD in physics from Harvard University in 2009 and is now an assistant professor. He received the Sloan Fellowship and the Packard Fellowship for Science and Engineering in 2013.