Compensating for modal scrambling during illumination and detection enables the use of multimode fibers to transmit high-contrast, confocal images for endoscopic applications.
16 October 2015
Christophe Moser and Damien Loterie

Since discovering that glass fibers are efficient guides for light, scientists have been investigating their use for transmitting images in endoscopic medical applications. Being thin and made of inert materials, these fibers are particularly suitable for insertion into the body. However, fiber-based image transmission is hampered by a phenomenon known as modal scrambling. When an image travels through an optical fiber, parts of that image can take different paths (modes). On arrival at the end of the fiber, these various light components do not appear in the same configuration as when they entered it, and as a result, the output image is blurred. This prevents us from looking directly through an optical fiber to see an image on the other side (see Figure 1).

For this reason, the first fiber-based imaging was achieved using fiber bundles. These have many separate light-guiding cores built into one fiber assembly. Each core transmits only one pixel of the image, and therefore blurring by modal scrambling does not occur. Today, fiber bundles are in widespread use for endoscopy. While they enable a considerable reduction in probe size compared with other endoscopic tools (such as using a miniature camera or scanner), they also have drawbacks. Light-guiding cores in a bundle need to be separated by a certain minimum distance to avoid light leaking from one core to another. Because of this, the resolution of a bundle is limited by the inter-core spacing, which is around 3μm. Since light between the cores is not guided, a large portion of the bundle's cross section is not used for imaging. Comparing fibers with the same external diameter, the typical number of pixels resolvable by a multimode fiber is approximately 10 times larger than for a fiber bundle (see Figure 2). 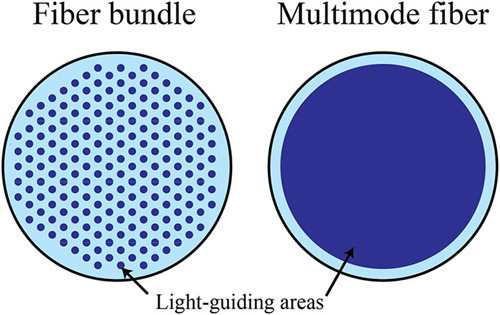 Figure 2. Fiber bundles can only collect light in the discrete cores, whereas in multimode fibers the light-guiding area is much larger.

Recent approaches are exploiting the higher information density of multimode fibers for imaging. With advances in wavefront shaping and holography, it is now possible to compensate for modal scrambling in conventional multimode fibers. These techniques enable methods such as reflection or fluorescence imaging, but with a significantly increased resolution compared with fiber bundles (down to the diffraction limit). Now we have shown that it is possible to obtain confocal images by specific processing of the light fields.1

Our method is based on a calibration procedure that records the association between the image at the input of the fiber, and the pattern at the output. A spatial light modulator sends a series of controlled light fields at the input, and we monitor the resulting output field on the other end using digital holography. When we have made a sufficient number of such input-output measurements, we organize the data into a transmission matrix,2 which describes how fields are transformed by the fiber through modal scrambling. By inverting the matrix, we can calculate which fields must be displayed at the input of the fiber to obtain a given pattern at the output. For example, it is possible to scan a spot over a sample at the far side of the fiber simply by displaying the appropriate patterns on the spatial light modulator. We can choose freely the lateral position and the axial depth of these spots, two additional features that are not available in a fiber bundle. We can form an image by collecting the light reflected back through the fiber by the sample. This creates images comparable to conventional wide-field microscopy.

In biological media, the contrast obtained with this technique may not be sufficient, for example, due to scattering of tissue below or in front of the desired image plane. Therefore, we require a method to reduce the out-of-plane contribution of light. In a conventional microscope, this is achieved by confocal imaging, which uses a pinhole near the detector whose center is conjugated with the focal point in the sample. However, in the multimode fiber, there is no conjugate plane, since the reflection of a focal point in the sample produces a 2D speckle pattern at the proximal end. The trick is to digitally recreate the focal point by using the transmission matrix. The resulting 2D image is then a bright focal spot surrounded by speckle noise, which is caused by the out-of-plane contribution of the light. We apply a digital filter mask to isolate the main focal spot, and record the intensity of the central spot. We repeat the process for every scanning point in the image.

Figure 3. Image of an epithelial cell on a cover glass. The digital confocal method (center) enhances contrast in images obtained through multimode fibers. 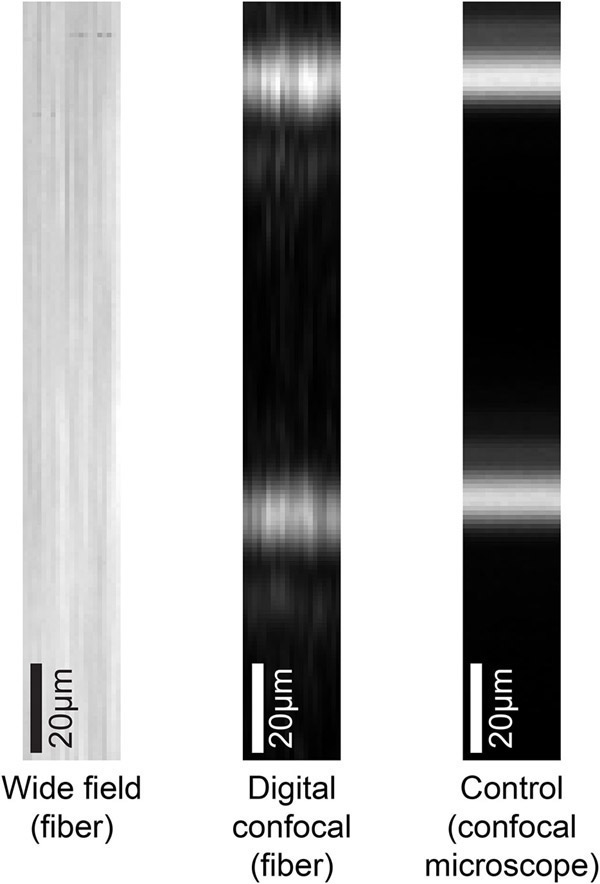 In summary, by compensating for modal scrambling during illumination and detection, we can obtain confocal images using a multimode fiber. The technique provides imaging features not currently available with state-of-the-art technology, namely, high resolution, dynamic choice of the focal plane, and effective background suppression. Our next steps are to increase the imaging speed, develop fluorescence imaging, and ultimately apply these methods for in vivo microscopy.

Christophe Moser is associate professor of optics. He obtained a PhD at the California Institute of Technology, and co-founded and was CEO of Ondax for 10 years before joining EPFL in 2010. His interests are holography for imaging, endoscopy, head-mounted displays, and optics for solar concentration.

Damien Loterie obtained an MS in photonics engineering from Vrije Universiteit Brussel, Belgium, and in 2013 joined EPFL. He was awarded the IMEC prize for his master's thesis on Raman spectroscopy in labs-on-chips. His research interests include fiber optic microendoscopy, holography, and wavefront shaping.