The wavefunction of graphene, which has two atoms per unit cell, can be described using a spinor with two components. As a result, graphene is frequently considered to be a system with pseudospin 1/2. This plays a central role in determining many novel physical properties of graphene,1, 2 such as Klein tunneling (where electrons are transmitted through a high potential barrier) and anti-localization.3, 4 A natural question to ask is whether systems with a higher pseudospin value can be constructed, and whether these would have interesting physical properties. In previous work,5–8 it has been suggested that it is possible to achieve a pseudospin of one with artificial crystals in ultracold atom systems, which can lead to striking transport properties. However, these systems require extremely low temperatures and are therefore technically difficult to obtain in experiments.

Many novel properties of graphene1,2 can be attributed to its unique conical band structure at the boundary of the Brillouin zone, which is where two cones meet at the Fermi level. Low-energy excitations can be described by a massless Dirac equation, with a pseudospin of 1/2. This is the origin of many unusual transport properties, such as Klein tunneling,3 Zitterbewegung (the rapid fluctuation of the position of an electron),9 and supercollimation of electron beams.10, 11 For photonic systems, a conical dispersion can also exist at the center of the Brillouin zone, where the wave vector (k) equals zero. It has been demonstrated12, 13 that in some 2D photonic and phononic crystals, a Dirac-like cone can occur at the center of the Brillouin zone. These cones are always accompanied by an additional flat band, which crosses the Dirac-like point (see Figure 1). The triply degenerate states that occur at the Dirac-like point are formed by the accidental degeneracy of monopole and dipole excitations. 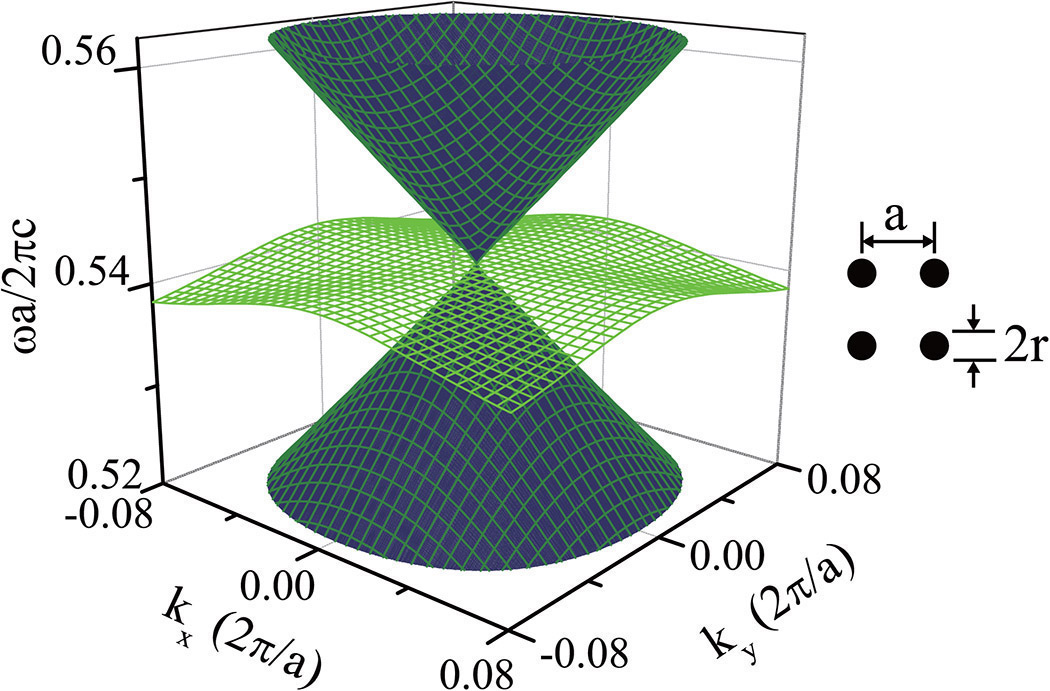 Figure 1. The band dispersion of a 2D photonic crystal (PC) near the center of the Brillouin zone (where the wave vector, k, equals zero) exhibits a Dirac-like cone. The inset shows the unit cell of a square PC constructed from dielectric cylinders—with radius, r, of 0.2a (where ais the lattice constant) and dielectric constant, ε, of 12.5—in air. kx and ky: Wave vectors in the x and y directions. ωa/2πc: Normalized frequency (where ω is the angular frequency of light and c is the speed of light).

In this work, we demonstrate that photon transport within the photonic crystals (PCs) mentioned above is governed by a pseudospin-1 Hamiltonian function.14 This provides the opportunity to study the related physics in materials that can be experimentally obtained. We can describe these PCs as an effective medium in which the permittivity and permeability12 are simultaneously zero at the frequency of the Dirac-like point. The effective index is positive or negative at frequencies above or below that of the Dirac-like point, respectively. Moreover, because of the additional degree of freedom that arises from the flat band, we can describe the eigenstates near the Dirac-like point by an effective 3×3 Hamiltonian that has a pseudospin of one, with the use of the effective-medium approximation.14 We call these PCs photonic pseudospin-1 materials.

The Berry phase of the Dirac cone for systems with pseudospin 1/2 is π. In contrast, materials with a pseudospin of one have a Berry phase of zero.14 This effective Hamiltonian describes—within a unified framework—the propagation of waves in media that have positive and negative refractive indices (which correspond to the upper and lower conical bands, respectively). The three components of pseudospin-1 photons are related to three independent electromagnetic modes that occur for each k-point. These are a longitudinal mode (which exists as a result of a zero effective index), a transverse mode with a positive refractive index, and another transverse mode with a negative refractive index.14 These three pseudospin states represent a new basis for pseudospin-1 photons. They are different from, and additional to, the intrinsic spin states that are used to describe the helicity of a circularly polarized photon in a homogeneous medium. The pseudospin-1 states can only exist in a medium that has an underlying subwavelength lattice structure.

Using the scaling properties of Maxwell's equations, we find that a change in the length scale of a PC can shift the frequency of the Dirac-like cone rigidly up or down, with no change in its group velocity. This process mimics a gate voltage in graphene and provides a simple mechanism for controlling the flow of photons with a pseudospin of one.14 As a photonic analog of electron potential, the shift in the Dirac-like point—induced by the change in the length scale—is effectively a photonic potential within the description of the effective pseudospin-1 Hamiltonian. With the use of this effective photonic potential to control wave transport, we can study the 2D scattering of pseudospin-1 photons from a 1D square potential barrier. We can create such a barrier experimentally by using a sandwich structure composed of two PCs with different length scales (see Figure 2). 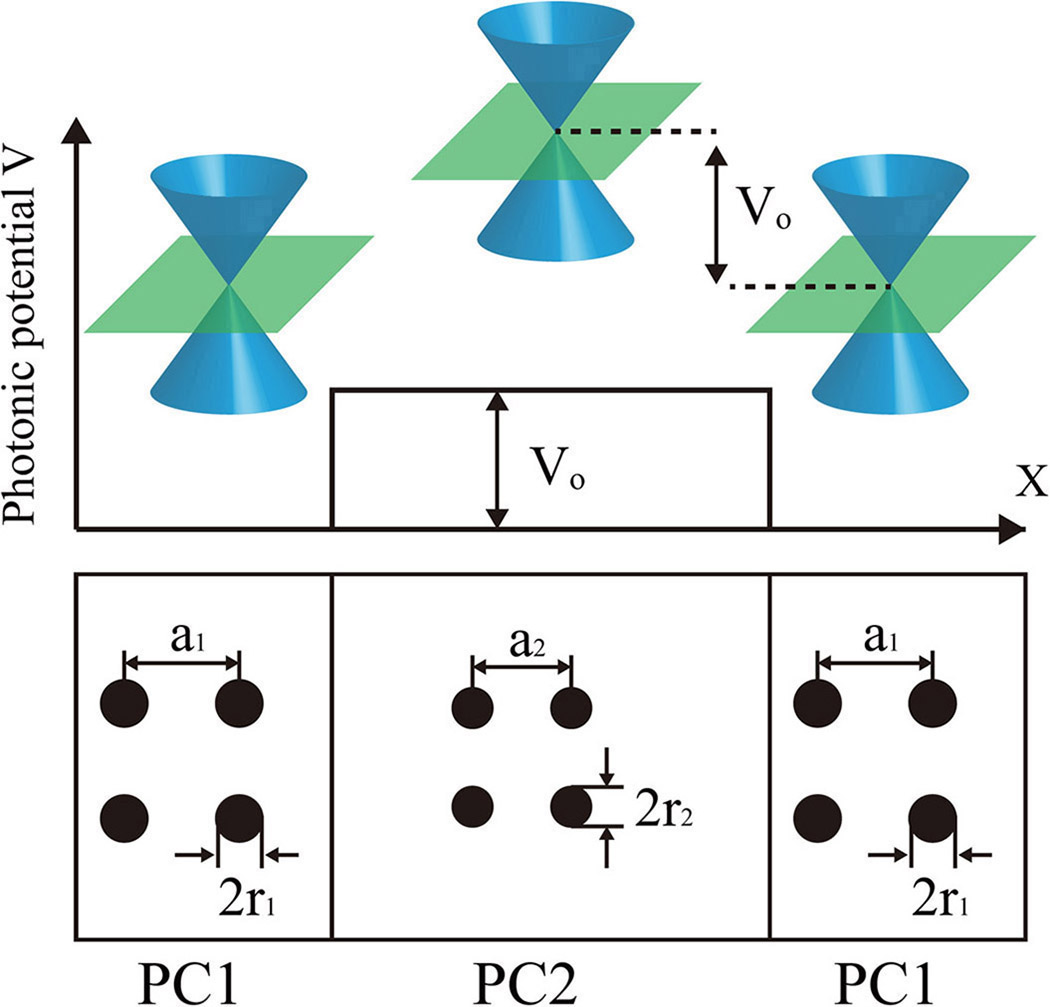 The transmittance of this sandwich structure, as a function of the incident angle at a reduced frequency, is shown in Figure 3. Here, the reduced frequency is taken to be the difference between the incident frequency and the frequency at the Dirac-like point of the first PC. It is also equal to half the height of the potential barrier. The transmittance is nearly unity for angles of up to 80°. This agrees very well with theoretical predictions of super Klein tunneling that are made using the effective pseudospin-1 Hamiltonian.5–8, 14 The sharp dip in transmittance at around an incident angle of 6.2° for the sandwich structure occurs because of Rayleigh–Wood anomalies.15 These anomalies arise because the two PCs share a common spatial period in our simulation. The anomalies can be avoided by using two PCs with incommensurate spatial periods. In contrast, the Klein tunneling of electrons with a pseudospin of 1/2 is highly anisotropic with respect to the incident angle (see Figure 3). 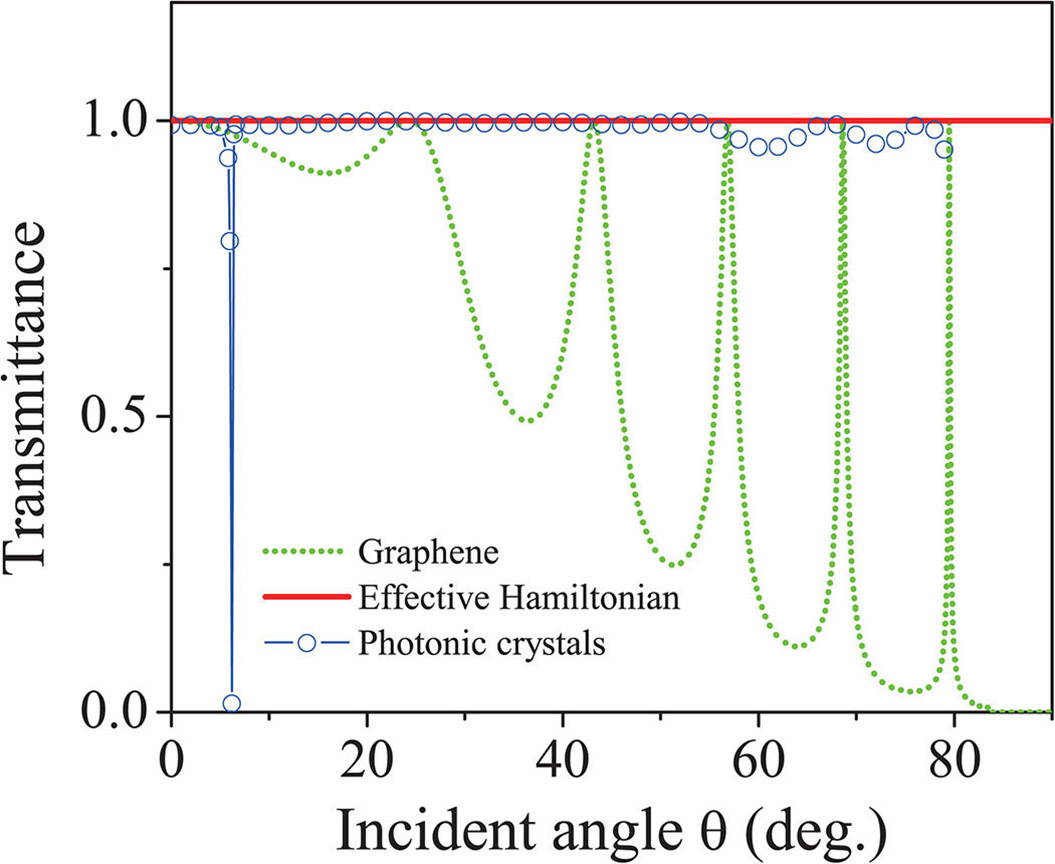 Figure 3. Klein tunneling of pseudospin-1 photons in PCs provides a transmittance value of almost unity. This is in contrast to graphene, which is an example of a system with pseudospin-1/2 electrons. deg.: Degrees.

In summary, we have shown that photonic materials with a pseudospin of one can be obtained using certain PCs that exhibit a conical dispersion at the center of the Brillouin zone. This makes it possible to study pseudospin-1 physics in an experimental system. The special wave transport properties of pseudospin-1 photons, together with the discovery of the effective photonic potential, may offer new ways to control photon transport. For example, we may easily be able to achieve collimation of wave packets in a superlattice of these PCs.14 In the future, we will also aim to investigate the difference between pseudospin-1 photons and pseudospin-1/2 particles when they encounter a disordered environment.

Che Ting Chan is a professor who is working on the theory of a variety of advanced materials, including photonic crystals and metamaterials.

Anan Fang received his PhD from Iowa State University. He is now a postdoctoral research associate. His research interests are focused on the study of metamaterials, plasmonics, and photonic crystals.

Zhao-Qing Zhang is a professor whose recent research interests include wave dynamics in the localized regime, as well as electromagnetic and elastic metamaterials.