Four years ago, Professor Bruce Parkinson reported on the Solar Hydrogen Activity Research Kit (SHArK) project,1 in which undergraduates and high school students around the world produced oxide semiconductors as materials for solar 'water splitting.' Since then, the program has published on new semiconductor materials, implemented dramatic hardware and software improvements, and developed a new method to generate combinatorial metal oxide semiconductor samples. This article is an update on the progress made by participants in the SHArK project.

The concentration of anthropogenic carbon dioxide in our atmosphere is steadily increasing, with unknown consequences. For that reason, it is crucial that societies switch to renewable sources of energy, the most abundant of which in our terrestrial environment is sunlight.2 However, to be useful within our current industrial infrastructure, solar energy must be converted into a chemical fuel. One of the most promising ways to generate solar fuel would be to use sunlight to split water (H2O) into oxygen (O2) and hydrogen fuel (H2) in a process called photoelectrolysis. Thus, there exists a critical need to develop a technology that is scalable, robust, efficient, and can use solar energy to split water into hydrogen fuel.3 There is no known photoelectrolysis material that meets these criteria.

To enable this technology, we must discover a material that exhibits the desired properties. One class of candidate materials for a photoelectrolysis solar panel is metal oxide semiconductors. These would likely be nanostructured alloys containing multiple metals that might achieve the desired photophysical and chemical properties. There are around 60 candidate metals in the periodic table; therefore, there are 34,220 unique combinations that contain three metals.4 Searching through all the possible combinations and discovering the optimal composition is a monumental task. 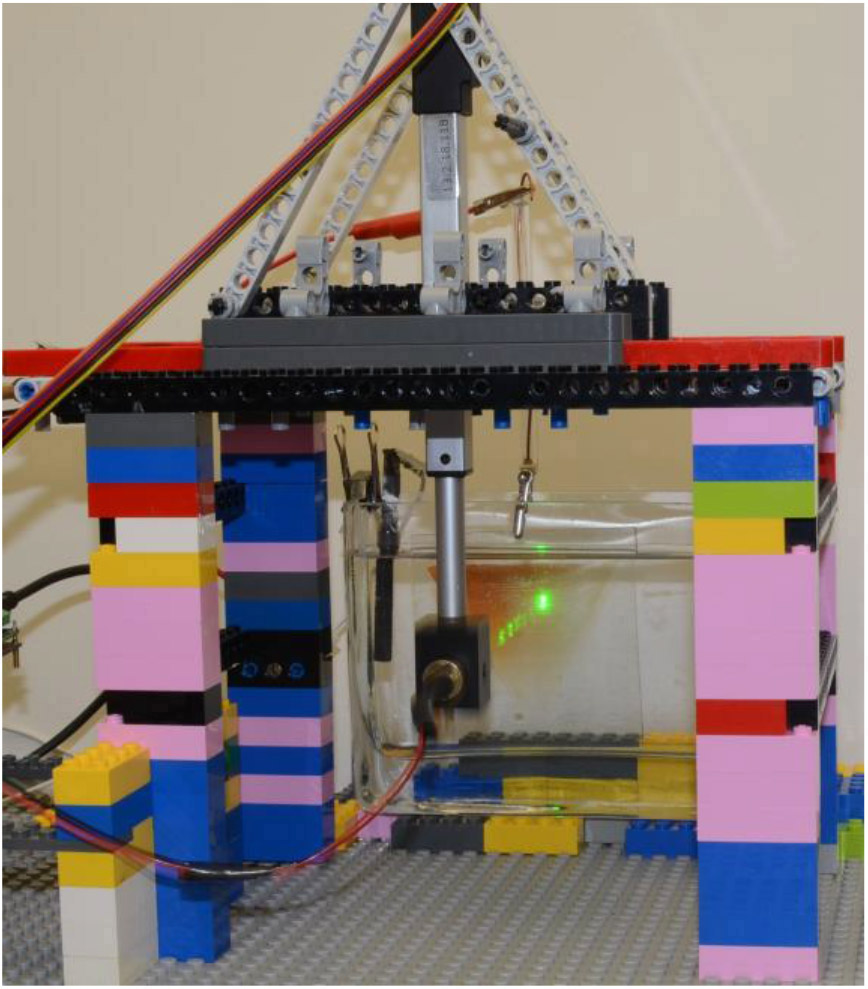 Figure 1. The laser-rastering kit developed at the University of Wyoming in 2012 for the Solar Hydrogen Activity Research Kit (SHArK) project, which seeks to characterize efficient oxide materials for photoelectrolysis.

Participants in the project prepare and examine possible photoelectrolysis semiconductors and then upload their findings to the SHArK website database.5 Recently, the Parkinson Laboratory at the University of Wyoming conducted a survey of the uploaded discoveries. We followed up on some of the promising materials posted to the database, most notably an iron-chromium-aluminum oxide alloy p-type semiconductor discovered in 2009 by an undergraduate researcher at Gonzaga University. We confirmed and characterized the material, details of which are available online (open-access).6 The paper constitutes the first example of a photoelectrolysis semiconductor discovered by an undergraduate, confirmed and characterized in a collaborating university research laboratory, and subsequently published in a peer-reviewed journal. We believe the publication is a clear demonstration of the efficacy of distributed research programs, and the SHArK project specifically.

SHArK has undergone several improvements since its inception in 2008. We recently upgraded the kit with significant hardware and software improvements. The new SHArK 2 scan station completes scans in as little as 30 minutes, whereas the old kit took up to five hours. We have improved the new scan station software interface to facilitate student understanding. Additionally, the new software automatically uploads all experimental findings to the website when the computer is connected to the internet. This ensures that both negative and positive results are available for data mining and to guide future research. This uploaded data is available to anyone via the SHArK website.5

We have also sought to improve the process of preparing the metal oxide thin film samples. At Carroll College in Helena, Montana, we developed an inexpensive, fast, and highly reproducible silk screen printing method to prepare the triangle gradient metal oxide thin film samples (see Figure 2).7 We shared this technique with the other high school and undergraduate researchers in a YouTube tutorial video.8 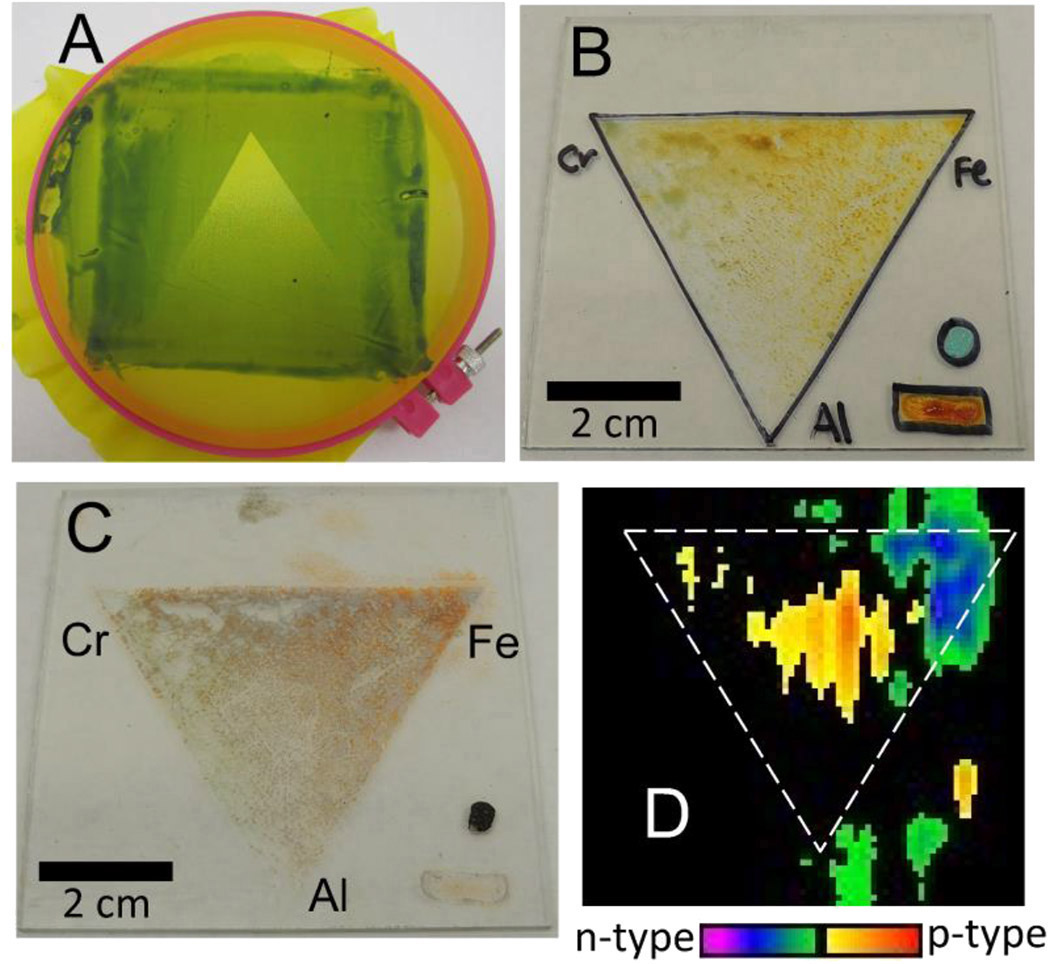 Figure 2. (A) Photograph of the ternary-gradient triangle image developed on a 230 thread-per-inch monofilament polyester silk screen mesh held in a plastic embroidery hoop. (B) Photograph of an iron (Fe)-chromium (Cr)-aluminum (Al) ternary-gradient triangle film deposited on a fluorine-doped tin oxide substrate before pyrolysis (thermochemical decomposition). This three-element combination is a duplication of the material reported in.6(C) Photograph of the sample in B after pyrolysis at 550°C. (D) False photocurrent image of the pyrolyzed film acquired using the new SHArK 2 scan station.

The SHArK project (and the other programs like it) provides a way for students to make direct and clear impacts on some of the challenges facing our civilization.9 To solve global problems does not require a PhD: only creativity, curiosity, and a passion for doing science. These characteristics are common in the students with whom I have worked. Providing a way for them to participate in the search for new photoelectrolysis materials has strengthened their interest in science and resulted in significant discoveries.

Future goals for the SHArK project will be to distribute more of our improved scan stations and increase the number of high school and undergraduate students participating in the project. Additionally, we will continue to follow up on promising materials discovered by young scientists, with the goal of sharing these discoveries with the broader scientific community.

I would like to thank the US National Science Foundation for funding the Center for Chemical Innovation in Solar Fuels and its numerous outreach programs. Thanks also to the high school students, undergraduate students, and their mentors who participated in the SHArK program. I would like to thank the team at the University of Wyoming, who developed the new SHArK 2 kit: Laurie King, Marvin Perry, William Becker, and Bruce Parkinson. Additional thanks goes to Carroll College research student Victoria Kong for developing the silk screen printing technique and publishing the tutorial video.

John G. Rowley is an assistant professor of chemistry.