A mixture of semiconductor nanocrystals and organic molecules is used to absorb and upconvert low-energy photons at visible and near-IR wavelengths.
20 October 2015
Christopher Bardeen

Solar energy conversion—with the use of semiconductor photovoltaic (PV) cells—is a good example of the fact that all photons are not created equal. The solar spectrum extends from the UV to the IR, and a significant fraction of this output lies at wavelengths beyond the visible range (i.e., at wavelengths greater than 700nm). Most of these long-wavelength photons, however, cannot be captured by a PV cell because their energy lies below the semiconductor band gap. Instead, these photons pass through the cell without being absorbed and without contributing to the photocurrent. This inability to harvest the low-energy (i.e., long-wavelength) photons is one of the factors that limits the maximum possible efficiency (the Shockley-Queisser limit) of single-junction PV cells to about 33%.1

One way to overcome the Shockley-Queisser limit is to reshape the solar spectrum so that it overlaps better with the absorption of the PV cell.2, 3 For the near-IR (NIR) portion of the spectrum, the idea is to ‘upconvert’ the light by combining two low-energy photons to make one higher-energy photon that can be absorbed by the PV cell.4 Simple frequency doubling in a nonlinear crystal is an obvious approach, but it is expensive and impractical for low-intensity sunlight. Organic triplet–triplet annihilation (TTA) is another strategy that yields good upconversion efficiencies at low light intensities, but it is difficult to find stable organic dyes that absorb in the NIR.5 Inorganic crystals containing lanthanide ions can absorb well into the IR, but their narrow absorption lines and weak oscillator strengths—combined with their high cost—mean that their application has been limited.6

We have recently demonstrated, however, a new hybrid organic-inorganic approach that has the potential to surpass the Shockley-Queisser limit by leveraging the strengths of both these types of materials.7 In our technique, we use inorganic nanocrystals (NCs), i.e., relatively photostable chromophores with band gap absorption spectra that can be tuned from the near-UV to the IR. In our upconversion approach (see Figure 1), the NC sensitizer absorbs a low-energy photon, which creates an exciton that can transfer energy to the low-lying triplet state of an organic emitter molecule. Once the triplet states of two emitter molecules have been populated, the two triplets can annihilate each other to form a high-energy single state on one molecule, which then emits a photon. The net result is that two low-energy photons—absorbed by the NCs—are transformed into one high-energy photon. 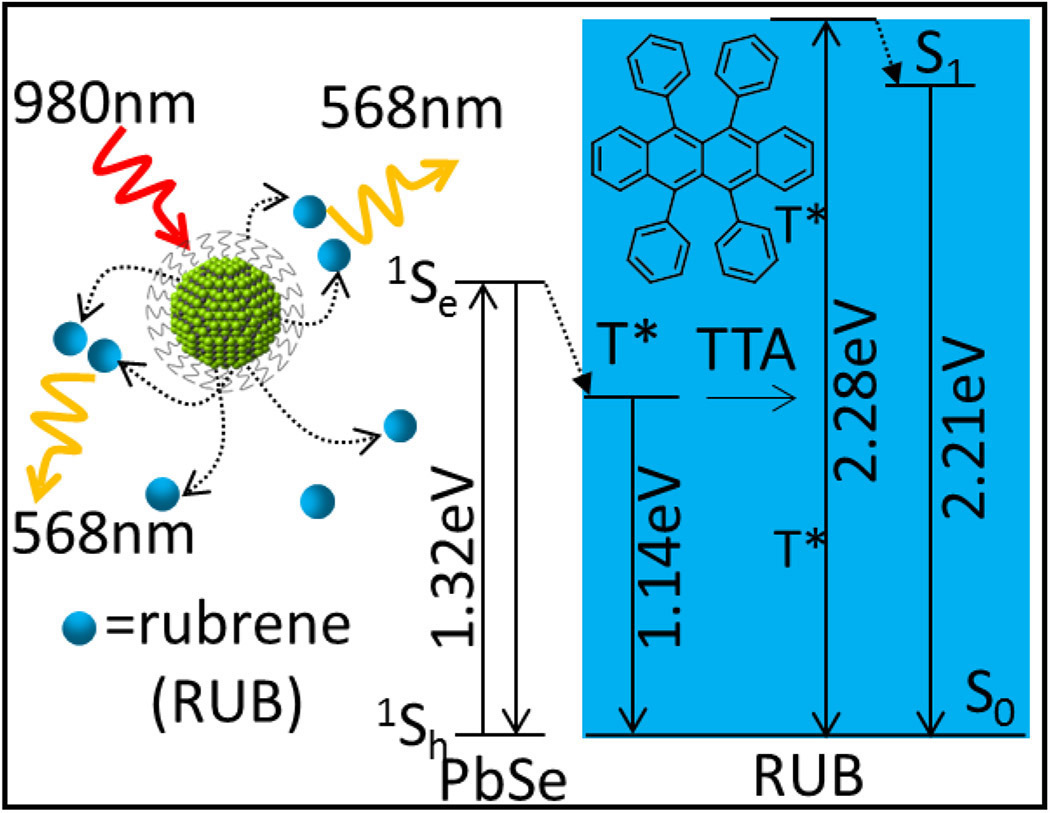 Figure 1. Schematic illustration of nanocrystal-organic hybrid upconversion. After the nanocrystal is excited by a 1.32eV photon, its energy is transferred to the triplet (T*) state of the organic emitter (rubrene). When two rubrene molecules in their T* states meet, they can annihilate each other to form the state (S1) that emits a high-energy photon at 2.21eV. TTA: Triplet–triplet annihilation. PbSe: Lead selenide. 1Sh: Valence band of the PbSe semiconductor nanocrystal. 1Se: Conduction band of the PbSe semiconductor nanocrystal. S0: Ground singlet state of the inorganic emitter molecule.

We used 2.1nm lead selenide (PbSe) NCs, capped with oleic acid ligands, in combination with rubrene emitters to upconvert the NIR (800–980nm) wavelengths to the visible (550nm) range. The visible upconversion that we achieved with these samples is illustrated in Figure 2(a). The photograph shows a bright yellow fluorescence originating from the spot where an 800nm laser beam hit the sample. The black color of the cuvette is caused by the PbSe NCs, whose absorption extends across the entire visible spectrum. We measured an upconversion quantum yield of 0.01% for this process. When we used a 980nm laser diode to excite the sample, yellow upconverted light was also observed. To the best of our knowledge, 980nm is the longest wavelength that has yet been upconverted using the TTA strategy. 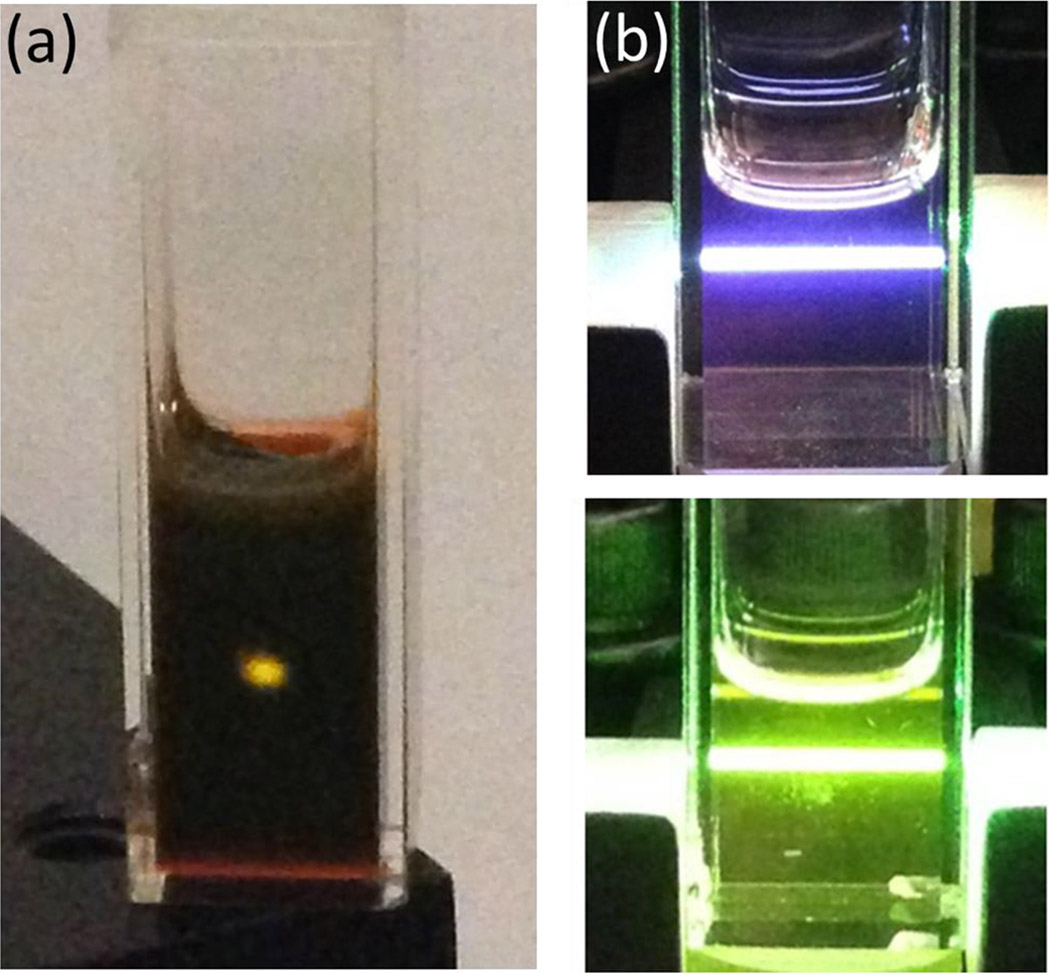 Figure 2. (a) Photograph of upconversion occurring within a cuvette that contains a 2.1nm PbSe/rubrene mixture. The yellow spot is emission from the rubrene that originates from an unfocused continuous-wave 800nm laser (with an intensity of 1W/cm2). Note that the laser is invisible in this image. (b) Photographs of upconversion occurring in cuvettes that contain cadmium selenide (CdSe) nanocrystals with 9-anthracene carboxylic acid ligands (top) and CdSe nanocrystals with standard alkyl ligands (bottom). The violet upconversion output in the 9-anthracene carboxylic acid sample swamps the green CdSe emission, which clearly dominates the sample with alkyl ligands.

The low efficiency of our PbSe NIR upconversion system has motivated us to investigate other strategies that could increase its efficiency. We find that using a conjugated organic ligand, which can act as a transmitter to mediate energy transfer from the NC to the emitter, is a promising approach. In this method, the energy can be transferred to the triplet state of a bound ligand molecule more easily than to an unbound emitter molecule that is floating free in a solution.

To demonstrate this transmitter strategy, we used cadmium selenide (CdSe) NC sensitizers in combination with diphenylanthracene emitters to upconvert visible (531nm) light to the blue region (420nm). When we used a non-conjugated ligand, there was no detectable upconversion from 532nm laser excitation. To facilitate the energy transfer, we therefore replaced the non-conjugated ligands with anthracene derivatives, which we functionalized with carboxylic acid groups. Our use of the anthracene ligands enhances the diphenylanthracene emission by a factor of 1000 or more. This results in a blue fluorescence output that is easily visible with the naked eye, as shown in Figure 2(b). We obtained the best performance when we used a 9-anthracene carboxylic acid ligand. We also calculated an overall upconversion efficiency of 9±2% when we used 2.7nm CdSe NCs with the 9-anthracene carboxylic acid ligand.

We have developed and demonstrated a new strategy for overcoming the Shockley-Queisser limit by upconversion. In this approach, we use both organic and inorganic (i.e., nanocrystal) materials. To make NC-sensitized upconversion viable for solar energy conversion, it will be necessary to increase the overall efficiency of our technique. Our results show that conjugated organic ligands can enhance the overall upconversion efficiency by several orders of magnitude, and we are therefore currently working to extend this strategy into the NIR. We should be able to achieve further efficiency gains by modifying the NC size or geometry, the ligand structure, or the emitter molecule. It should also be emphasized that NC-sensitized upconversion could have applications beyond the field of solar energy conversion, i.e., in biological imaging.